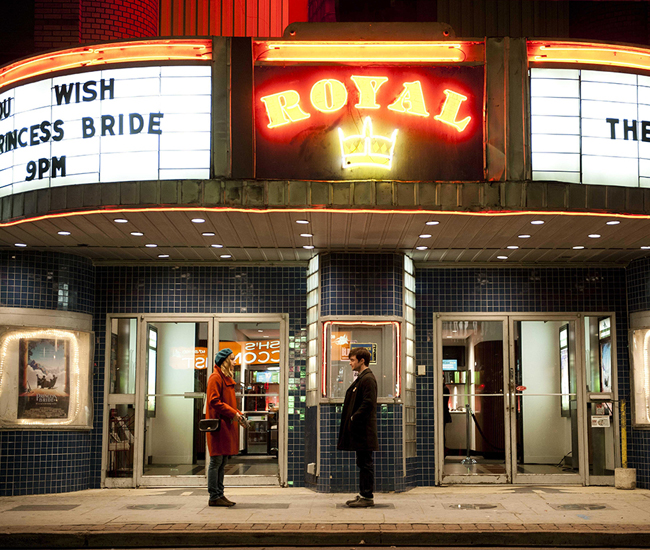 It’s known as “Hollywood North” for its ability to stand in for a variety of locations, but rarely does Toronto get to play itself

Just in time for National Canadian Film Day, we rounded up 10 films from the past 30 years in which Toronto – and its unique architecture and streetscapes – gets a starring role. 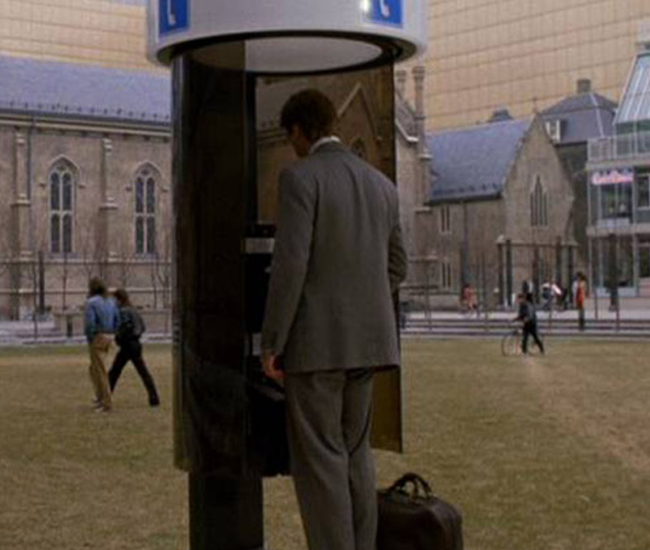 1 Dead Ringers (1988)
Early in his career David Cronenberg directed a series of television shorts focusing on Toronto locations (including Fort York and the Don Valley) and it’s been the backdrop for most of his features. It started out standing in for other cities, such as New York in The Fly, but by the time he made Videodrome in 1983, Toronto was cast as itself. In Dead Ringers, it reprises the role. Though the psychological thriller features mostly interior shots, it does hit up a few recognizable locations, including Casa Loma, dressed as the restaurant where Genevieve Bujold confronts the two main characters, played by Jeremy Irons, whom she has unknowingly been dating. Bell Trinity Square gets some screen time as well, with the adjacent 483 Bay Street acting as the twins’ apartment building. 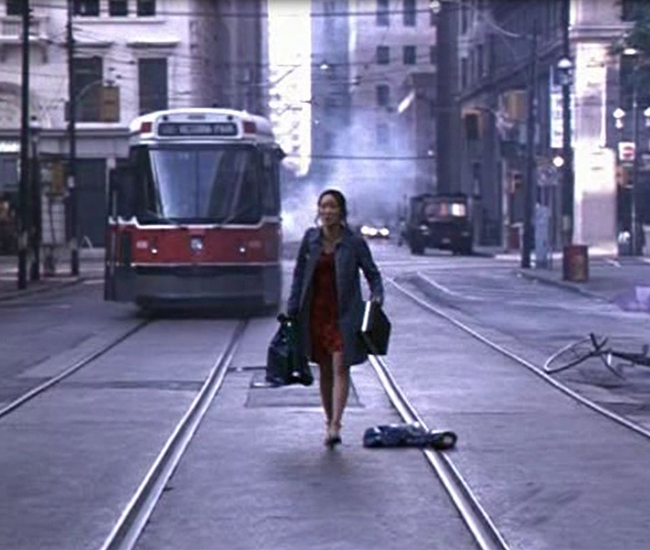 2 Last Night (1998)
Don McKellar’s eerie drama, which follows Patrick Wheeler’s last night on earth, takes place across Toronto, but the setting feels oddly unusual. In McKellar’s vision, civilization has all but collapsed, and the sun shines brightly throughout the night. Even so, there are traces of the familiarly Torontonian, as in the iconic streetcars that litter the streets, upturned, like beached whales. McKellar casts the city with a retro feel that’s expressed in various ways: run-down storefronts, the outmoded suburban home of Patrick’s parents (complete with fieldstone fireplace and velour sofa), Patrick’s apartment tastefully decked out with mid-century furnishings, and the steely Mad Men-era Petrolia headquarters. It’s a version of Toronto that’s slightly askew, like a suit that doesn’t quite fit, and heightens the quiet despair at the film’s core. 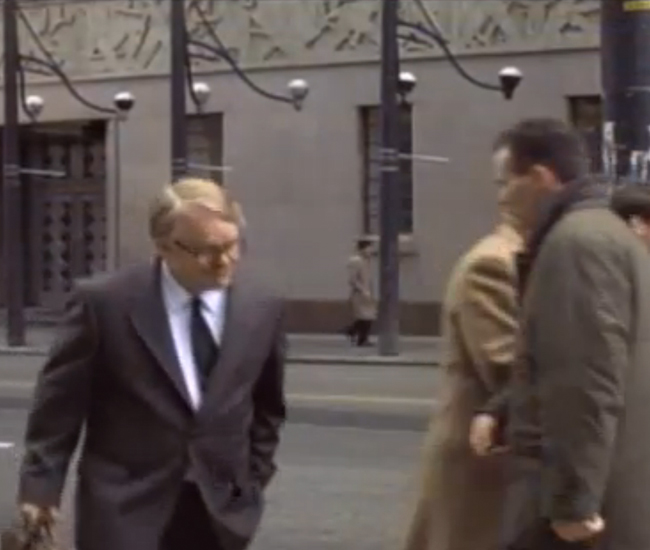 3 Owning Mahowny (2003)
In the early 1980s, a Toronto banker named Brian Molony embezzled $10-million from the Canadian Imperial Bank of Commerce to pay off his gambling debts. And in 2003, he was portrayed on the big screen by none other than Philip Seymour Hoffmann. Owning Mahowny, directed by Richard Kwietniowski, gives viewers a sense of Toronto’s Bay Street banking world. The action takes place against the backdrop of the Toronto Stock Exchange – an Art Deco landmark later modernized by Kuwabara Payne McKenna Blumberg and transformed into the home of the Design Exchange – and inside the Toronto Dominion Bank (now the slender tower at 1 King West). 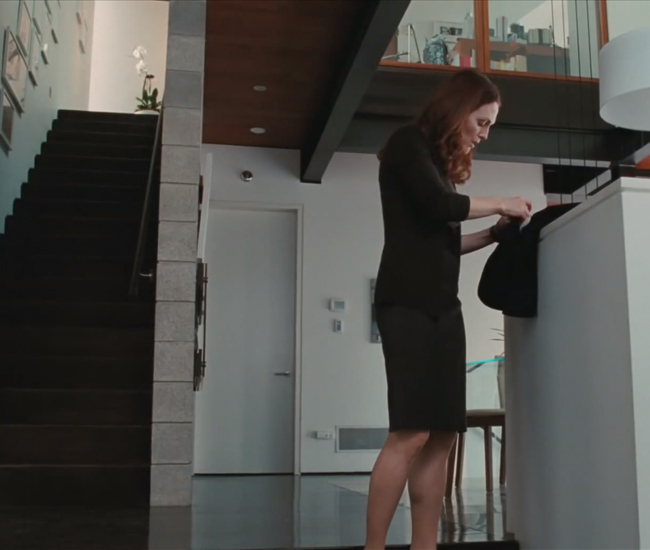 4 Chloe (2009)
Chloe is a favourite in our office (Azure included it in a 2013 list of 10 Modernist Houses in Scary Films) not only because it features Toronto landmarks like the Yorkville neighourhood and Café Diplomatico on College Street. It’s also primarily set in a modern Toronto house. And here is the film’s real twist – for architecture buffs. The exterior of the home is the Heathdale House by Teeple Architects, but the interior scenes were filmed in the Ravine House by Drew Mandel. There’s something to be said for Toronto modernism – we sure love our multi-volume massing. 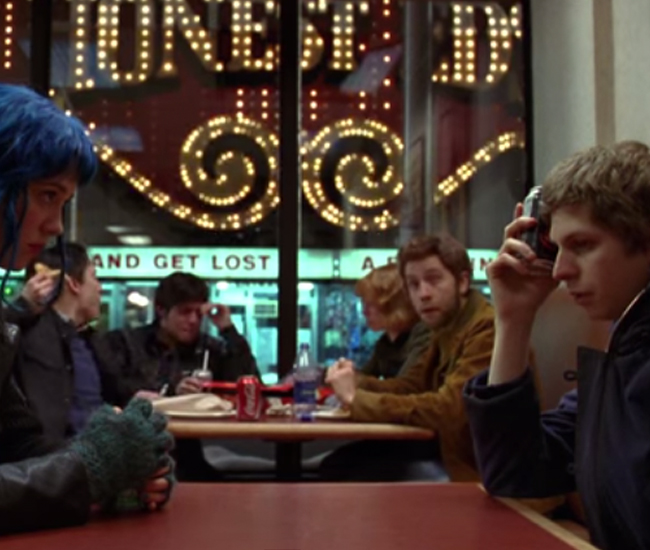 5 Scott Pilgrim vs. the World (2010)
The character Scott Pilgrim was born in Halifax, in the form of a song that inspired Bryan Lee O’Malley’s comic book series. The movie version remains true to O’Malley’s vision, using many of the same locations seen on the page. The city plays a starring role here, with its cheesiest, most comic-appropriate features on display. The protagonist (played by Michael Cera) hangs out at Pizza Pizza with the infamous swirling lights of the Honest Ed’s sign in the background and shops for records at the original Sonic Boom location. From Cabbagetown to Casa Loma (where local filmmaker Don McKellar has a cameo as a director), the whole city is represented. The efforts to represent the Toronto seen in the comics went as far as completely recreating the interior of concert venue Lee’s Palace to appear as it was seen in the books. 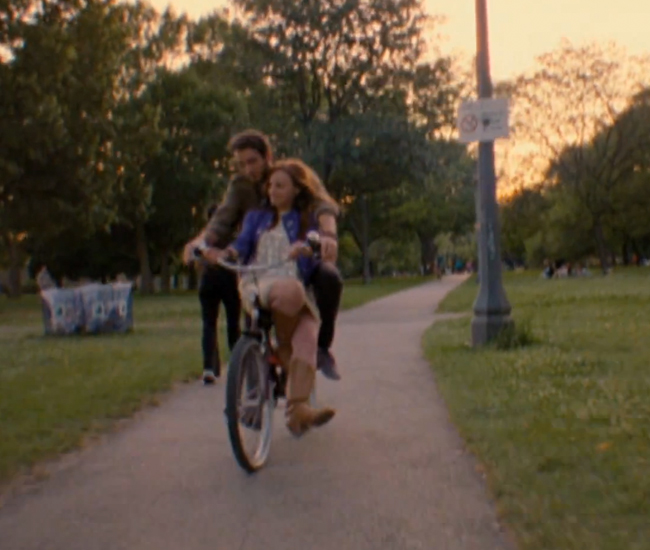 6 This Movie Is Broken (2010)
A concert film and an ode to Toronto, Bruce McDonald’s This Movie is Broken stars the city’s biggest music act. Lead characters Bruno and Caroline live out their day together – possibly their last, since Caroline is leaving the city for good – as a prologue to a concert by the Broken Social Scene. The film plays out as a journey to that rock ‘n roll ending, with scenes that follow the two leads through the shabby chic Drake Hotel (designed by 3rd Uncle) and Trinity Bellwoods park. The concert is taking place at Harbourfront Centre – thanks in large part to some memorable local politics. Originally, the band was set to play at Olympic Island, but 2009 was the summer that city workers went on strike and the movie was shot as garbage was piling up on the streets. 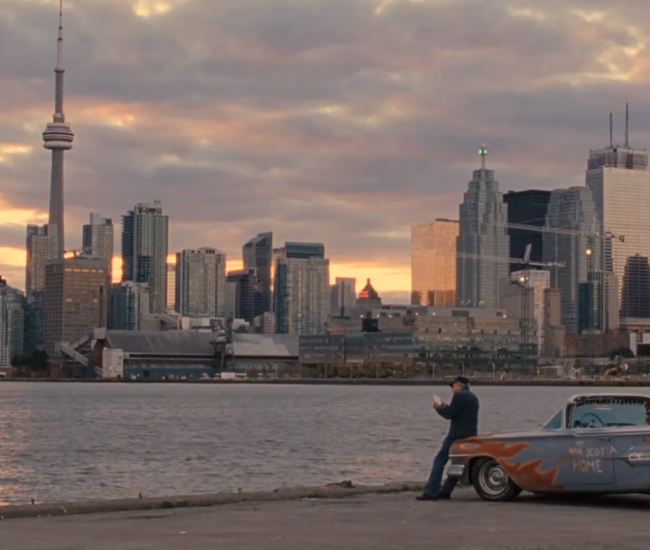 7 Down the Road Again (2011)
When Goin’ Down the Road was released in 1970, telling the story of two Maritimers heading west to Toronto in search of a better life, it garnered critical praise, an armful of awards, and its fair share of parody, too. Forty years later, Down the Road Again picked up the story after a gap long enough to fill half a lifetime, and it’s a return in the literal sense as well: hoser Pete, now in his silver years, drives the battered Impala to Toronto in the opposite direction – from Vancouver this time – on his way back to Cape Breton. In its reprise appearance, Toronto shows a more attractive side. There are appearances by quaint residential streets and the now-closed Clarion Hotel – one of the few remaining red-brick mansions in the area around Moss Park. But it’s the city skyline that really shines, as seen in this shot taken from the Polson Street Pier. 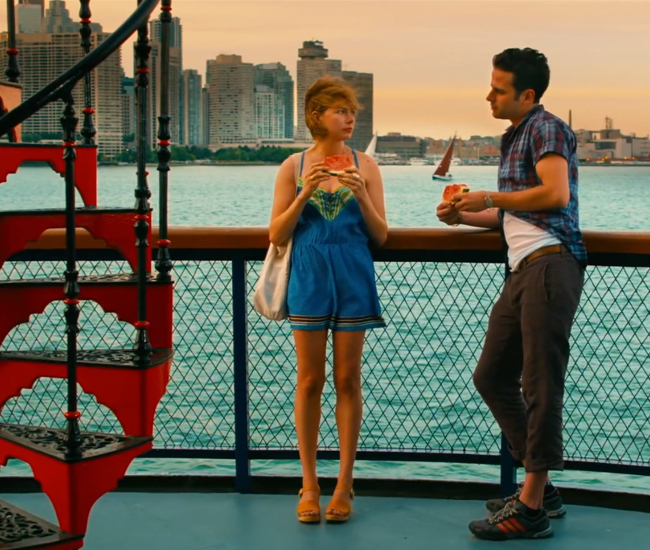 8 Take This Waltz (2011)
With a rickshaw-ride down Queen Street West, the love triangle begins. In this Sarah Polley film, married Toronto couple, Margot and Lou (Michelle Williams and Seth Rogan) meet neighbour Daniel (a kind of manic pixie dream boy played by Bruce Kirby), who opens Margot’s mind to everything she is missing in her relationship. The adulterous seed is planted when Margot and Daniel share a cab from Pearson Airport to their homes in Little Portugal. Subsequently, as they rendezvous around town, recognizable fixtures like the Lakeview Restaurant – a hipster haunt that’s been around since the 1930s – and Kensington Market make cameos. While the film’s three possible endings might rankle some viewers, one thing’s for sure: that Romni Wools sign has never looked more iconically Toronto. 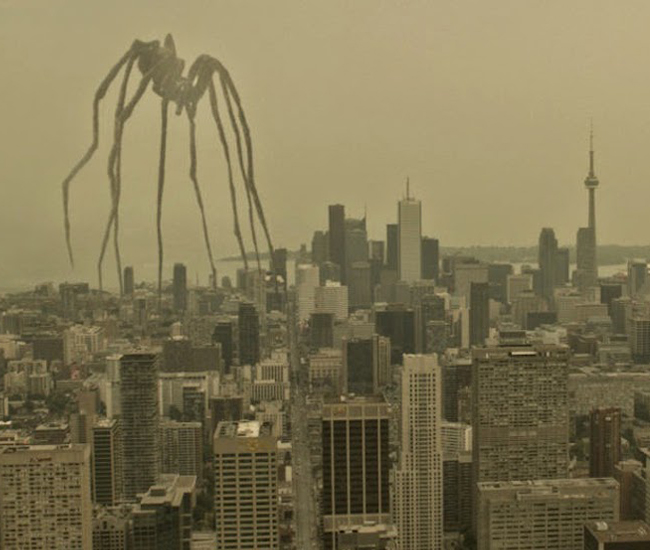 9 Enemy (2013)
After Prisoners, this was Quebec auteur Denis Villeneuve’s second creepy movie starring Jake Gyllenhaal, who seems to be enjoying playing disturbed characters (see: Nightcrawler). Enemy takes place largely in Mississauga. As Gyllenhaal’s Adam Bell starts to lose it, and his doppelganger becomes his titular enemy, spiders show up in the cracks of his psyche – and hover over the skyline. Anyone familiar with the Absolute buildings – the sultry twin condos, also known as the Marilyn towers, designed by Chinese architecture firm MAD – will recognize the setting right away. As far as placemakers go, the towers have put Mississauga on the map, and made many wonder why Toronto proper doesn’t have a similar daring condo design, considering the unprecedented amount of development we’ve seen in the past decade. 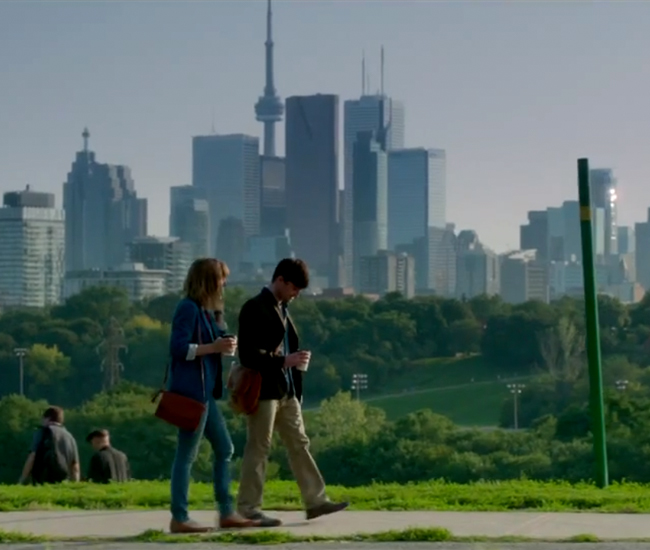 10 The F Word (2013)
Released as What If in starchier markets, The F Word is another film that flaunts its setting; this one sees Harry Potter himself, AKA Daniel Radcliffe, as the hero. Sweeping shots of the city streets and skyline punctuate the film as the action moves through familiar locales such as Riverdale Park, Cherry Beach, Queen West, East Chinatown and even ventures out to the Scarborough Bluffs. The interiors are equally familiar, with the leads making regular stops at the George Street Diner and meeting by chance at the Royal – a historic Art Moderne movie house in Little Italy. Of particular note: they play Ping-Pong inside Spin, an event space, featuring raccoon graphics, designed by MSDS Studio.

Originally published by our sister publication, Azure, to coincide with the magazine’s 30th anniversary issue dedicated to Toronto.