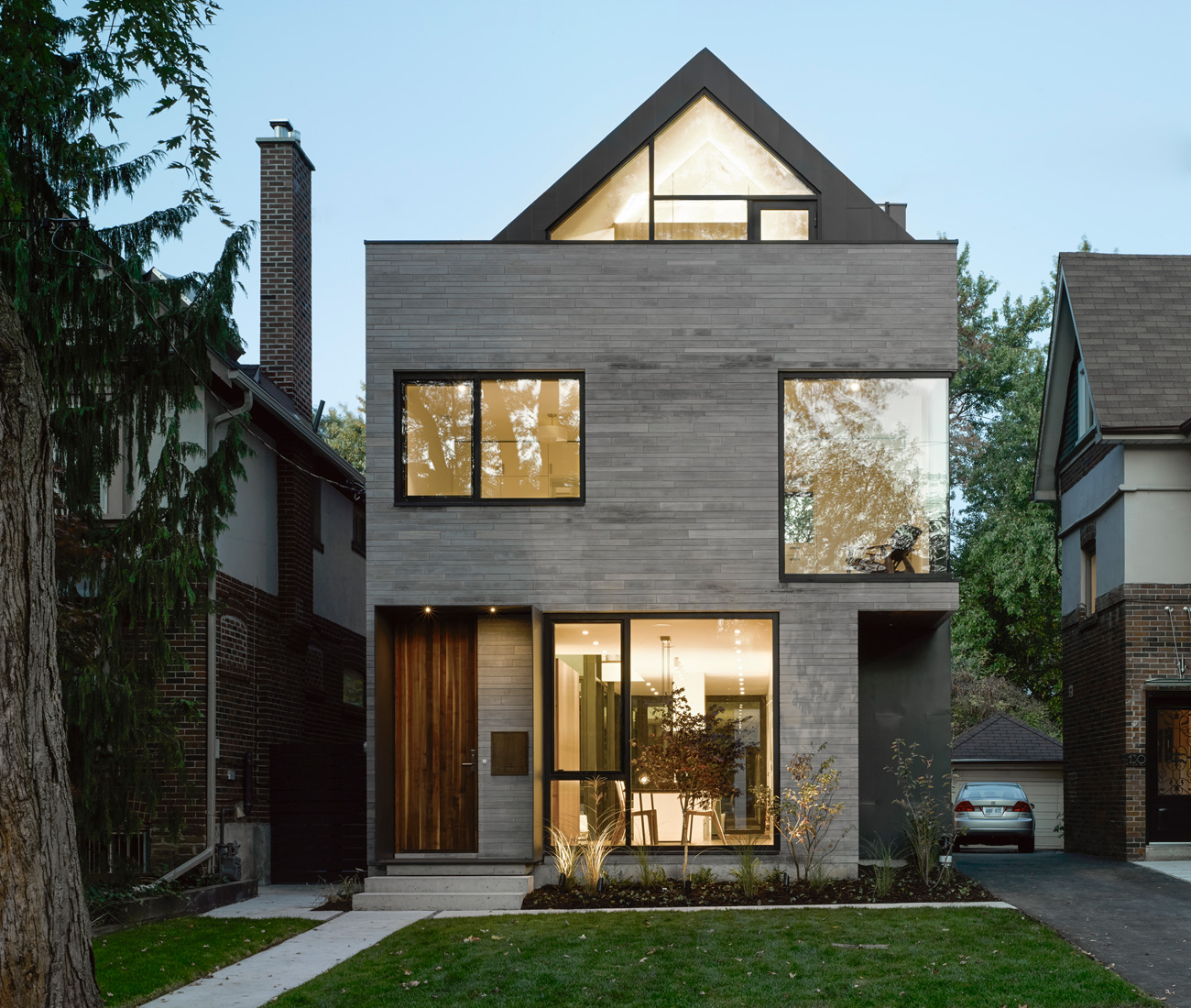 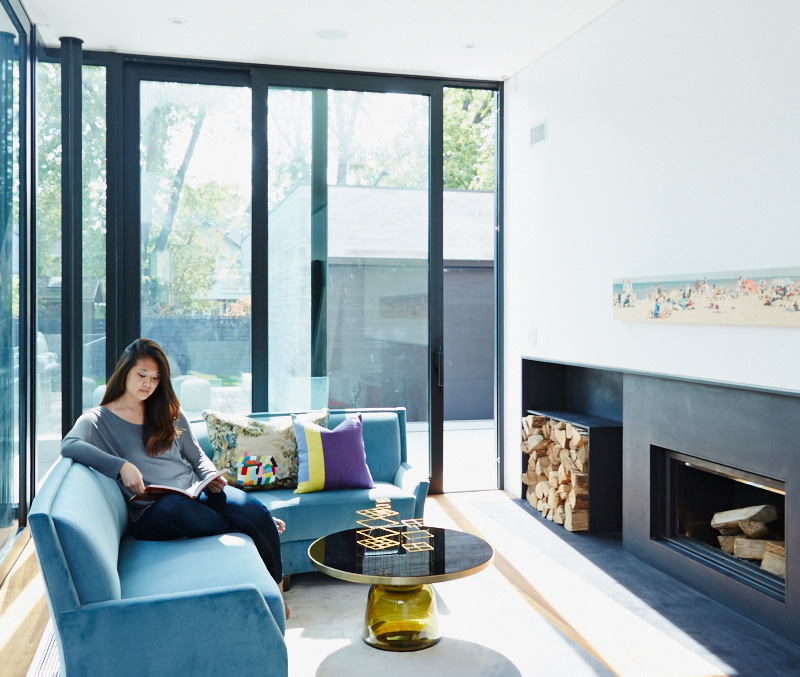 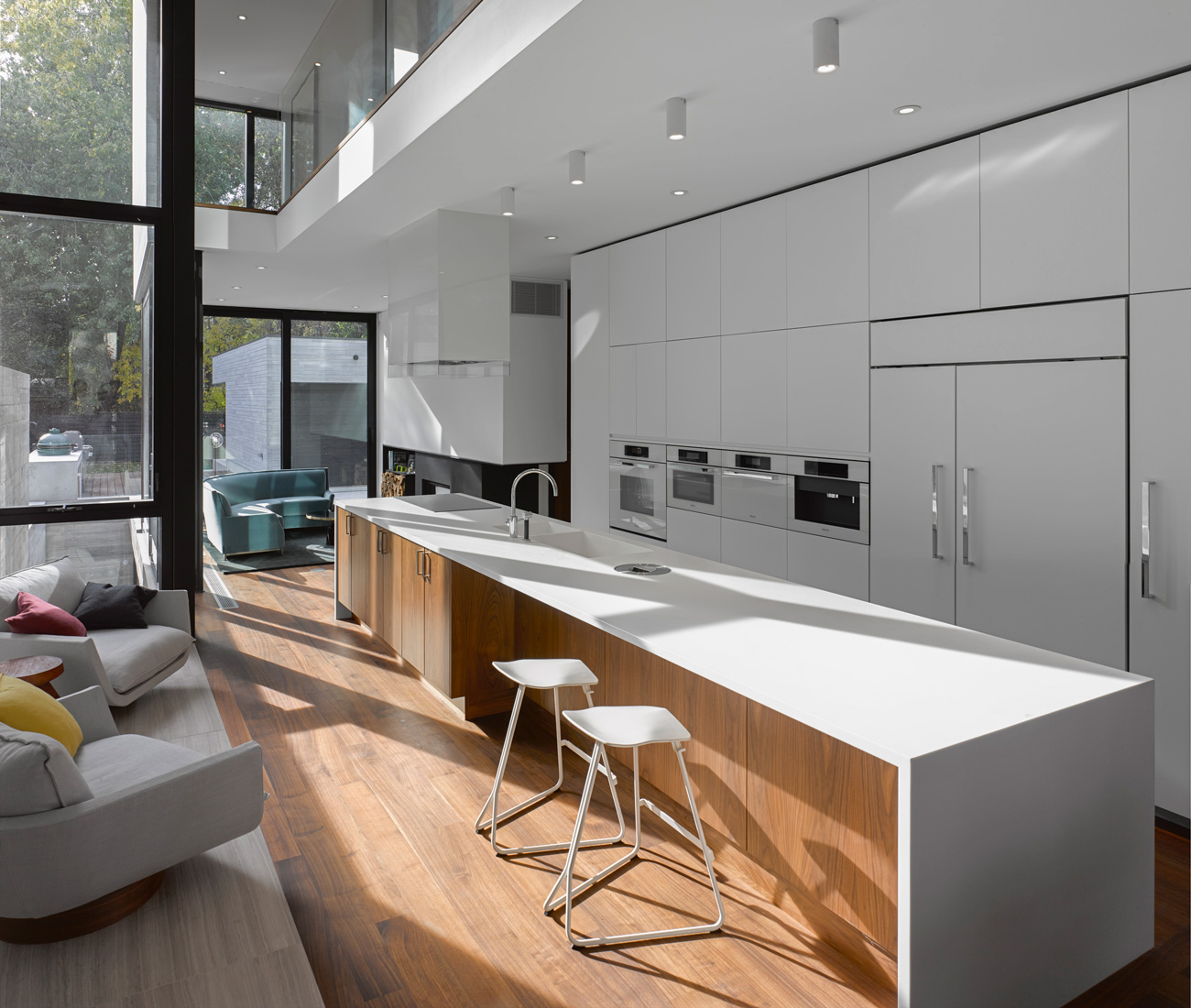 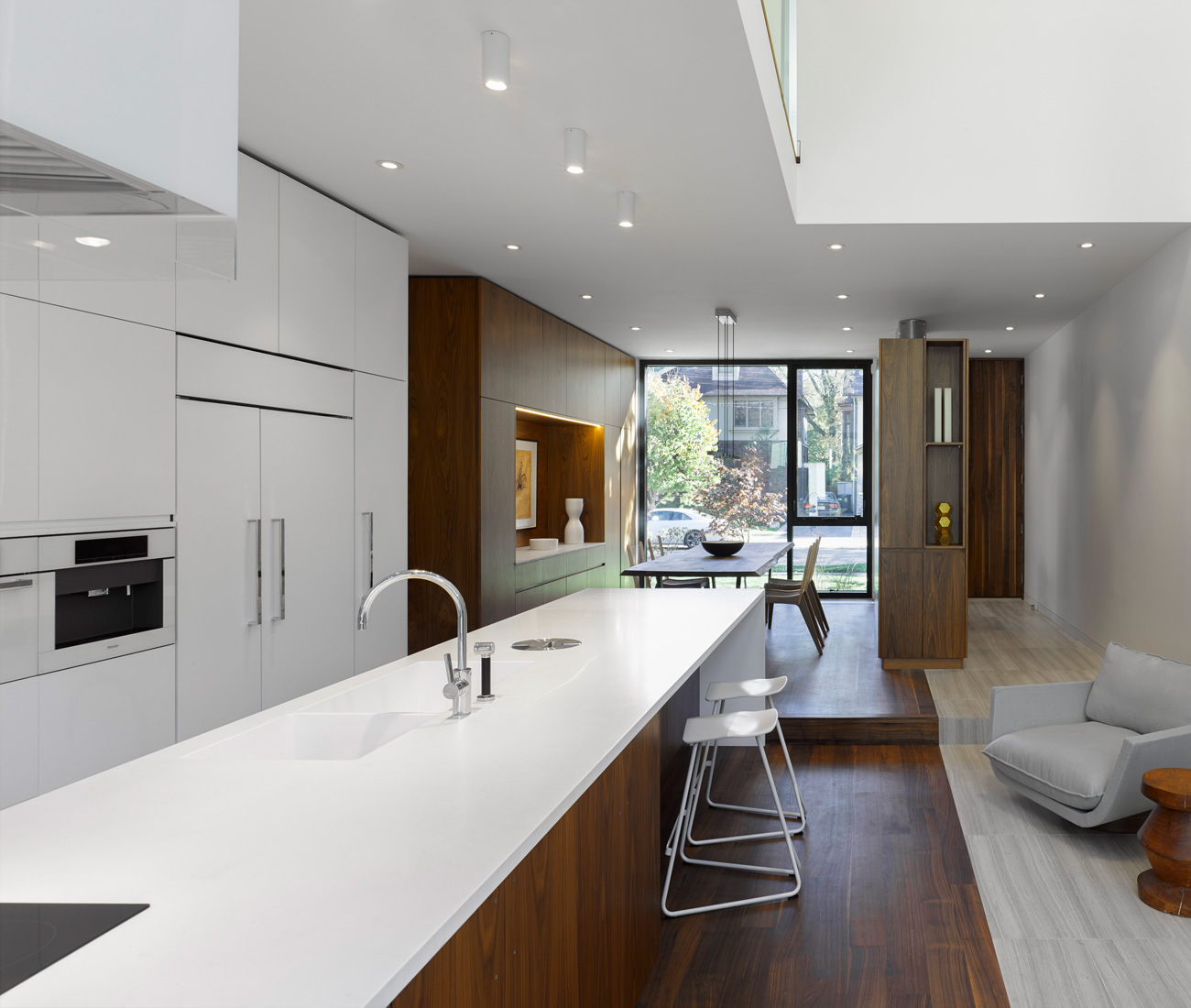 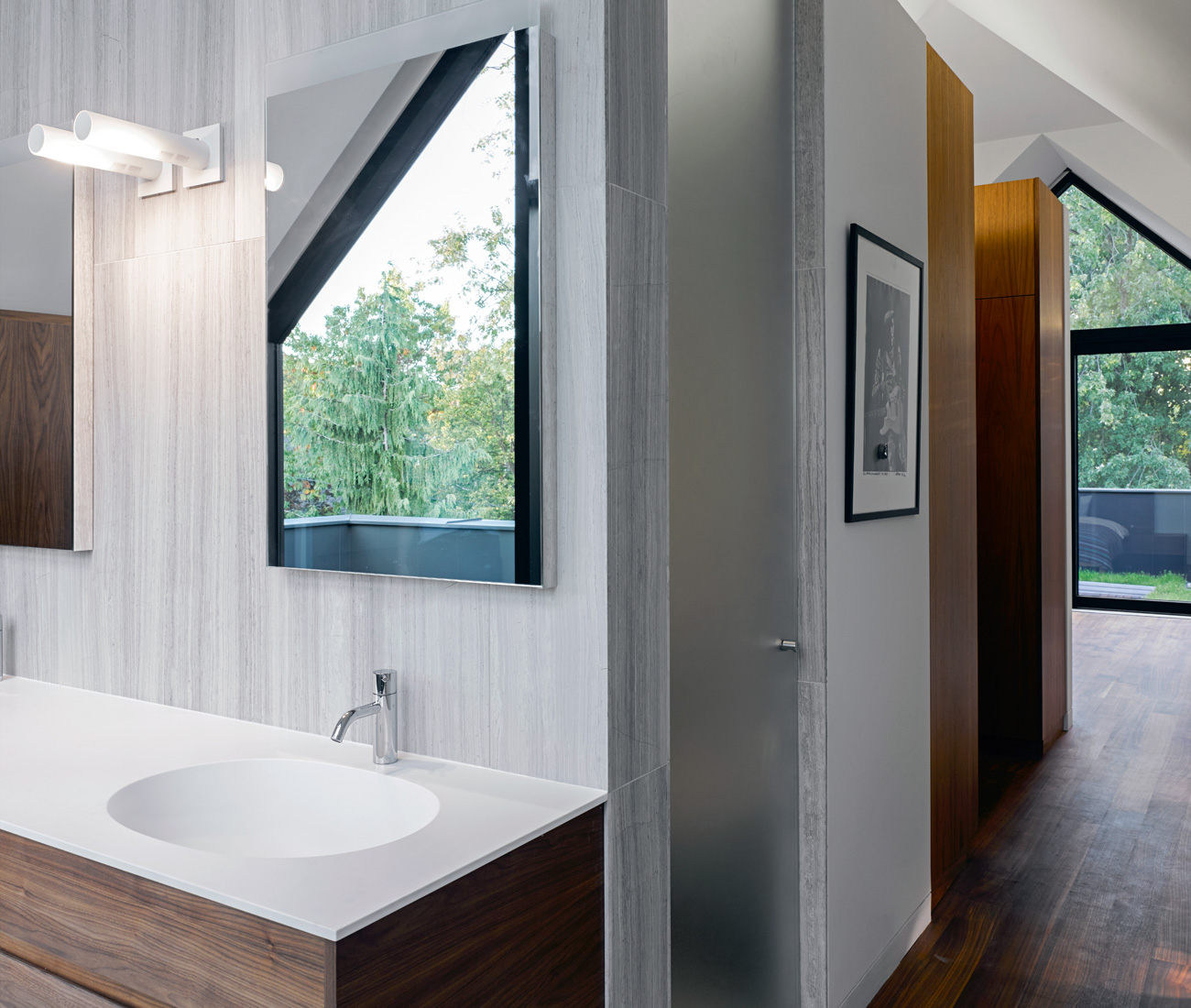 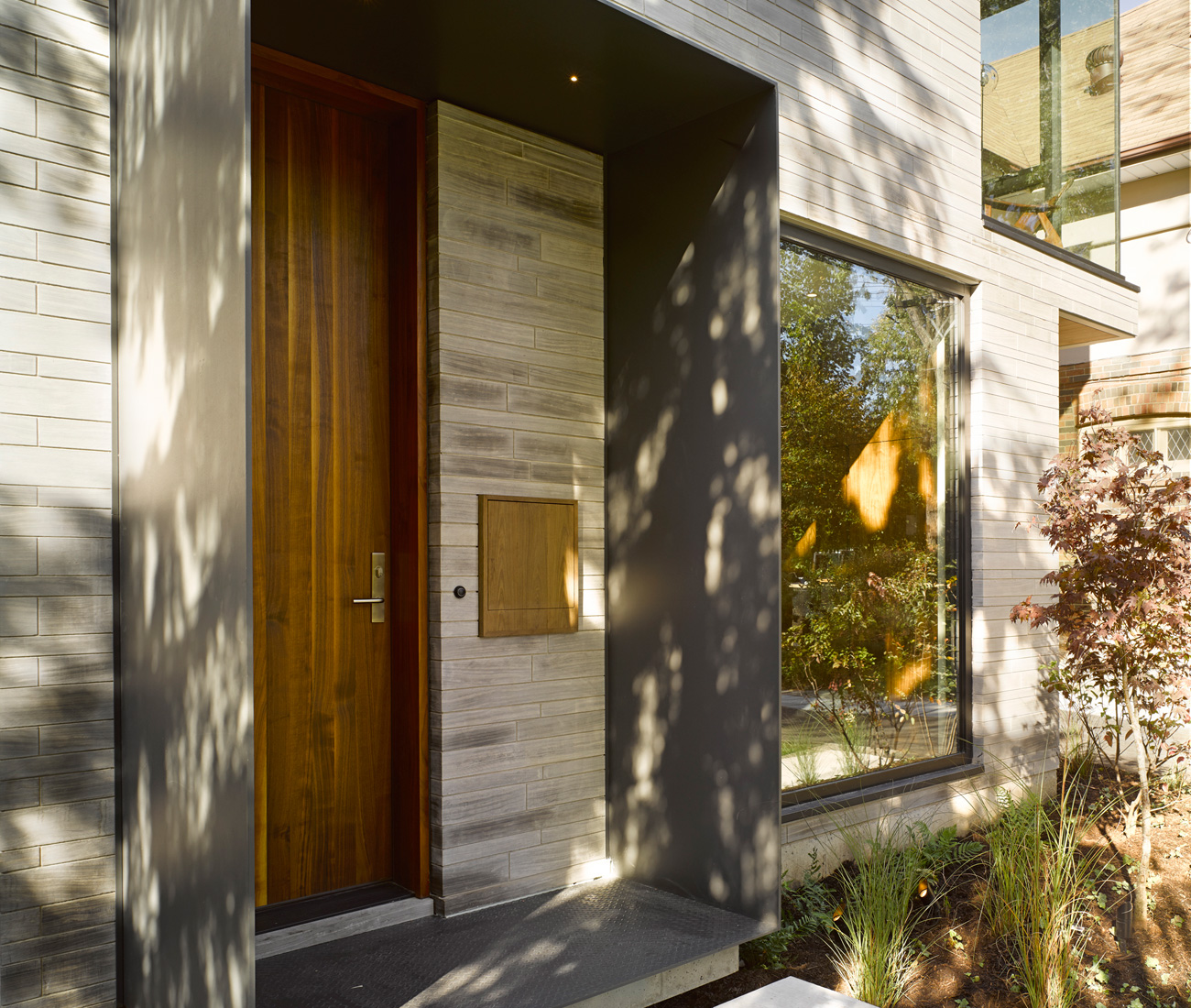 In architecture as in life, it’s hard to stand out from the crowd while fitting seamlessly in. Architect Drew Mandel’s design for a Moore Park residence accomplishes that feat and then some. His clients, a couple with a young son, liked the neighbourhood for its leafy quietude, but wanted a 21st-century home. That meant tearing down and rebuilding – a novel proposition on a street replete with ’20s houses, the kind with peaked roofs and mazes of dark rooms and shallow basements. Mandel’s creation plays with that form but imbues it with openness and light.

He began by designing a flat-roofed, unabashedly modern space – an aesthetic for which he’s known and one of the reasons the clients chose him. But just as he had conceptualized the design, the city introduced a new zoning bylaw that limited flat-roofed homes to two-storeys, whereas peaked-roof structures could still have three. Rather than fight the city or lop off the third floor, Mandel decided to embrace the challenge and add a pitch.

Happily, the constraint didn’t diminish the modernity of the 390-square-metre three-bedroom home; rather, it resulted in one of its most remarkable features – the master bedroom. Directly beneath the peak, and bookended by two outdoor terraces, a cathedral ceiling runs east-west. Here, Mandel included a series of clerestory windows, so the interior partitions that separate the otherwise open-concept en suite, dressing room and sleeping space wouldn’t have to reach to the ceiling. Not only does the glass allow for a stronger reading of the architecture, it draws light through the entire area.

Constraint resulted in another of the home’s achievements – the basement. “The clients didn’t want a lower level at all,” Mandel says. They viewed subterranean spaces as dark, dank and dreary. He tried to accommodate their wishes, but since they asked for a home office, media room, gym and wine cellar he realized he’d have to build a fourth floor. Building this above grade was not an option, and so the puzzle would have to be solved with a light-filled lower level.

Mandel dug out the basement, making it as lofty and airy as possible by cutting out a notch from the back of the house for a deep, wide light well, which he lined with texture-rich, board-form concrete. The slice allows for floor-to ceiling windows underground, illuminating the den and an adjacent yoga studio. The lighting is spectacular. It washes down the concrete wall, not only making the rooms feels larger but sublimely distinguishing the house from its earth bound neighbours – without overpowering them.

Originally published in our Fall 2014 issue as Piqued Interest.