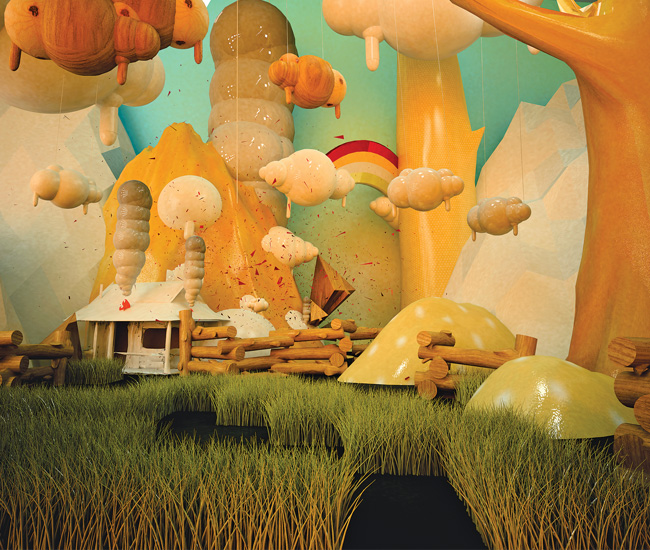 It looks like a diorama made of marshmallows, but Alex McLeod digitally rendered this fairytale scene – and it’s not as sweet as it appears

This ain’t cottage country. The wood fence and cabin imply serenity, but there’s something weird about those puffy clouds and that storm brewing out of the roof. Best to paddle back, through the reeds and past the cake-mould tower. Welcome to the dichotomous world of Alex McLeod. “My work revolves around the idea of the process of matter, how things die and are reborn,” says the internationally blogged-about local artist. “Things explode, but it’s not necessarily bad. I guess that’s why I have cheery colours – so it’s not too doom and gloom.” McLeod uses both sourced and custom-built elements in his computer-generated pieces, and he gives them a realistic, sculptural feel by focusing on surface quality and balancing between reflection and matte finishes. His idyllic-yet-ominous 3-D scenes have taken on a new twist, where he’s traded pastoral backdrops for the urbane. But don’t expect to see any buildings you recognize: McLeod is careful not to model specific architectural forms. “I don’t want that direct connotation,” he says – which means it’s up to us to imagine how Toronto would look if downtown was built at the foot of an ice mountain.