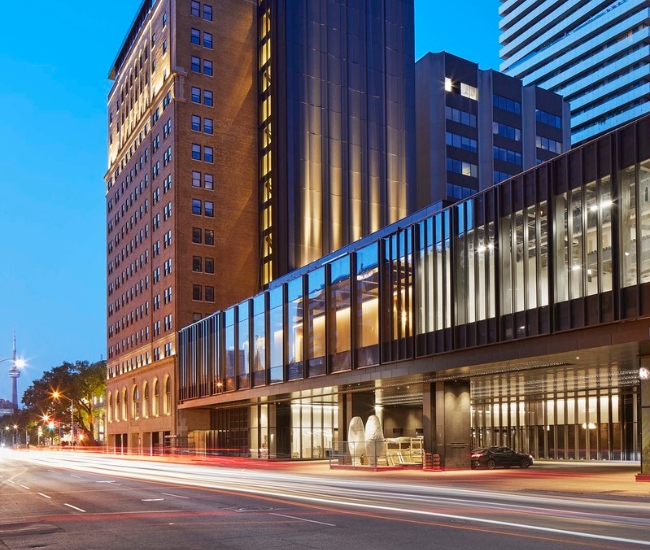 After a four-year renovation by KPMB Architects, Studio Munge and ERA Architects, the venerable hotel is looking better than ever

There are hotels that provide out-of-town visitors with a place to sleep, and then there are places like the Park Hyatt Toronto: a true local landmark that has established itself as a key part of the city’s urban fabric. A Bloor Street fixture since 1936, the hotel’s Art Deco tower (originally opened as the Park Plaza Hotel) has long drawn tourists and locals alike to its rooftop bar, which boasts one of the best views of the city.

Needless to say, when Oxford Properties announced that it would be overhauling the entire Park Hyatt Toronto complex – including the original 17-storey south tower, the modernist north tower added in 1956, and the base podium that connects the two – the pressure was on to deliver something appropriately grand. Thankfully, they assembled an expert team: KPMB Architects to orchestrate the big architectural moves, Studio Munge to design refined interiors and ERA Architects to oversee the restoration of key heritage details like the south tower’s brick and limestone facade, now scrubbed clean and refreshed with more efficient windows.

Unveiled last week after four years of work, the interiors deliver both a sense of escapism and a reminder of what makes Toronto special. Examples of stylish Canadian and local design are spread throughout the lobby and 219 guest rooms: Dora vases by Coolican & Company rest on a bookcase in the presidential suite, Bocci pendants float above the front desk and Laurent chandeliers by Lambert et Fils hang over the bar at Joni, the hotel’s new restaurant. At the south end of this luxe dining space, a true show stopper of a black feature staircase leads up to the second-storey ballroom, looking as dignified and ceremonious as a finely tailored tuxedo. A handsome palette of dark wood, natural stone and cushy leather adds to the rich ambiance.

Custom art, curated by Tatar Art Projects, is another key element of the revitalization. In the lobby entryway, guests are greeted by Dead Ringers, a wall tapestry by Shannon Bool that depicts runway models dressed in couture made by stitching together photos of local Brutalist buildings. (Central Tech high school has never looked so chic.) And along the sidewalk out front, a sculpture by artist An Te Liu sees two bronze forms positioned to look like they’re old friends engaged in conversation.

Speaking of which, anyone seeking somewhere to catch up over a drink will find plenty to enjoy in the reimagined Writer’s Room rooftop bar. While guest rooms now concentrated in the north tower and the south tower has been given over to rental apartments, this feature maintains its original pride of place looking out over the ROM. Its outdoor terrace has been significantly expanded, while fun caricatures on the walls inside recognize writers like Maragaret Atwood and Mordecai Richler who were once regular patrons.

Thanks to its new enclosure – a modern glass box that matches the look of a new elevator core and the rebuilt ground-floor podium – the new rooftop bar makes a bold impression even from street level. For anyone in town for the first time, it’s encouragement to explore the local scene. And for those who call the city home, it’s a reminder of what makes Toronto a destination in the first place.