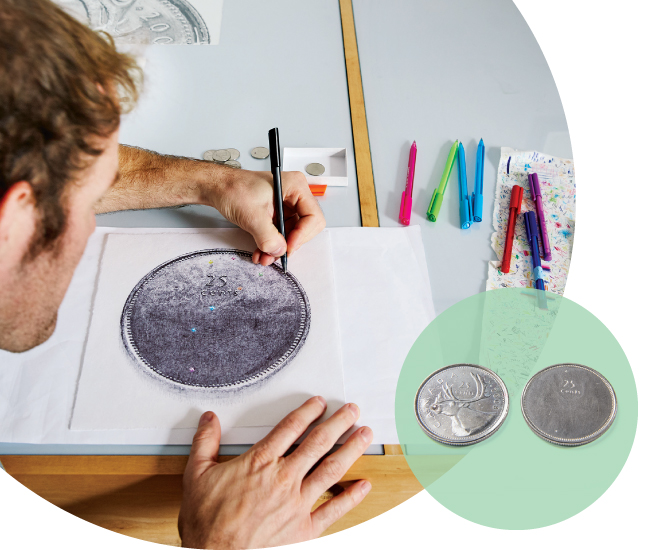 How the artist transforms loose change into exceptional sculptures

Whether we know it or not, each of us carries around miniature artist multiples almost every day. Coins might not be worth much more than the fraction of a dollar stamped to their sides, but they express something about history and design in their finely wrought details.

Artist Micah Adams discovered this eight years ago in the tiny maple leaves on the soon-to-be-discontinued penny. Using a jeweller’s saw with a blade a quarter-of-a-millimetre wide, he cut out each one until he created a Lilliputian pile. When the copper was heated, the leaves turned iridescent colours, just like in autumn. He has reassembled the details on our currency in many ways ever since.

His skill at working in a small scale began in the jewellery studio at art school, but the roots of this interest go further back. “I would pick little things up off the street when I was younger and keep them in my pocket, like they were precious,” he says. Adams eventually concentrated on coins because he was fascinated, in part, by the mint’s graphic decisions, quirks and all.

For example, he discovered that those three pinpoint markings around the caribou head on Canada’s quarter were meant to represent something more significant. “The designer, Emanuel Hahn, wanted to include the Big Dipper,” he says of the 1937 arrangement. “But just these three dots are left.”

This inspired Adams to erase the quarter’s embossed designs, all but the trio of stars. To help make this intervention even more visible, he recreated the coin in page-sized, ballpoint drawings that look like enlarged rubbings.

As to whether it’s legal to destroy cash in the name of art, Adams admits it’s a grey area. He’s never heard of anyone getting arrested for it, so he’ll keep on crafting coins until the real coppers come calling.