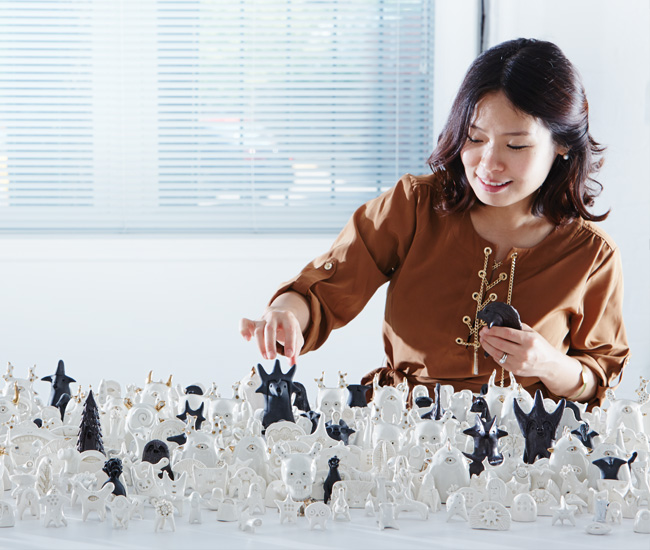 At the Harbourfront Centre’s Craft Studios, a lineup of clay beasts awaits finishing touches, and despite the funny faces the process is no laughing matter. Take the Eye Popping salt shaker: a 12-centimetre-tall skull with inset eyes and an ear-to-ear grin (if it had ears, that is, instead of gold-tipped horns). Unconventional beauty marks are added after it’s sprung from the mould, ahead of a three-round, 24-hour finishing procedure, which begins with a bisque fire to transform the clay to ceramic. Then the skull is glaze fired, which seals and hardens the body. A final lustre firing stage fuses the hand-painted accents. The resulting quirky good looks and exquisite artisanship is signature Grace Eun Mi Lee, a ceramic artist whose elegant repose belies a wickedly mischievous sensibility. 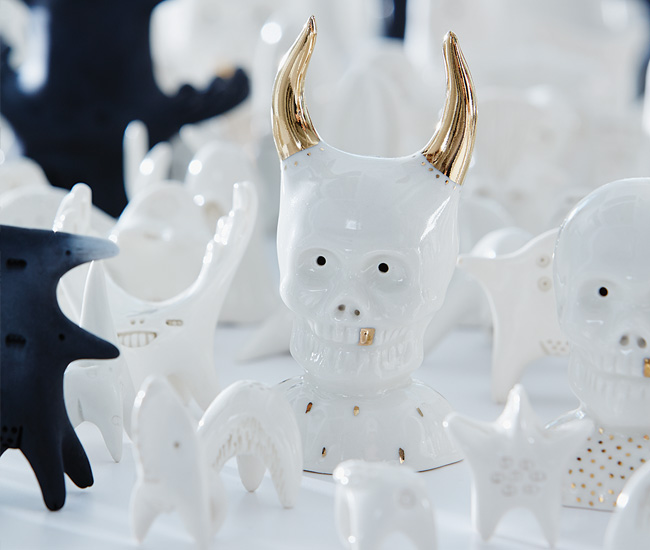 The skull salt shaker is actually one of the more functional creations in Lee’s vast repertoire, which includes four-legged critters whose faces resemble sea anemones; horse-shaped characters wearing elaborate helmets; and a squat, globular body with nothing more than bat ears and an upward-pointed mouth full of teeth. Using Q-tips, screws, pens and pencils, she sculpts her porcelain army by replicating silhouettes, but always varies the features. The rogue limbs, gaping orifices and sagging body parts are inspired by everything from idiosyncratic human faces to micro­organisms. But because we can’t actually know what lies behind facial expressions, or how miniscule living things go about their daily lives, Lee leaves much to the imagination. “When I’m in a creative mood, my hands just take over and produce things,” she says.

A relative newcomer to the Canadian design scene, she began her career in 2000 as a ceramics student in South Korea. At first, she crafted larger sculptures, but she found them “tough to keep, hard to sell” and decided in 2006 to go small – literally. She’s made thousands of figurines since, grouping large masses together to create swooping exhibits at Nuit Blanche, the Gladstone Hotel and the Craft Ontario Shop (beginning on August 7). But a recent show at the Ascenseur Gallery signals her move toward more functional pieces and bespoke commissions, like a chess set featuring beautiful black and white enamel aberrations that resemble the inhabitants of Middle Earth. “I don’t want to make art only for me. I want to make people smile,” Lee explains as she pulls out a notebook and rattles off ideas. She talks of music boxes, mobiles and piggy banks. And while delightfully diminutive, they’ll also be covered in extra limbs, horns and scowls – an altogether different, yet amiable kind of charm. eunmilim.com

Originally published in our Fall 2014 issue.