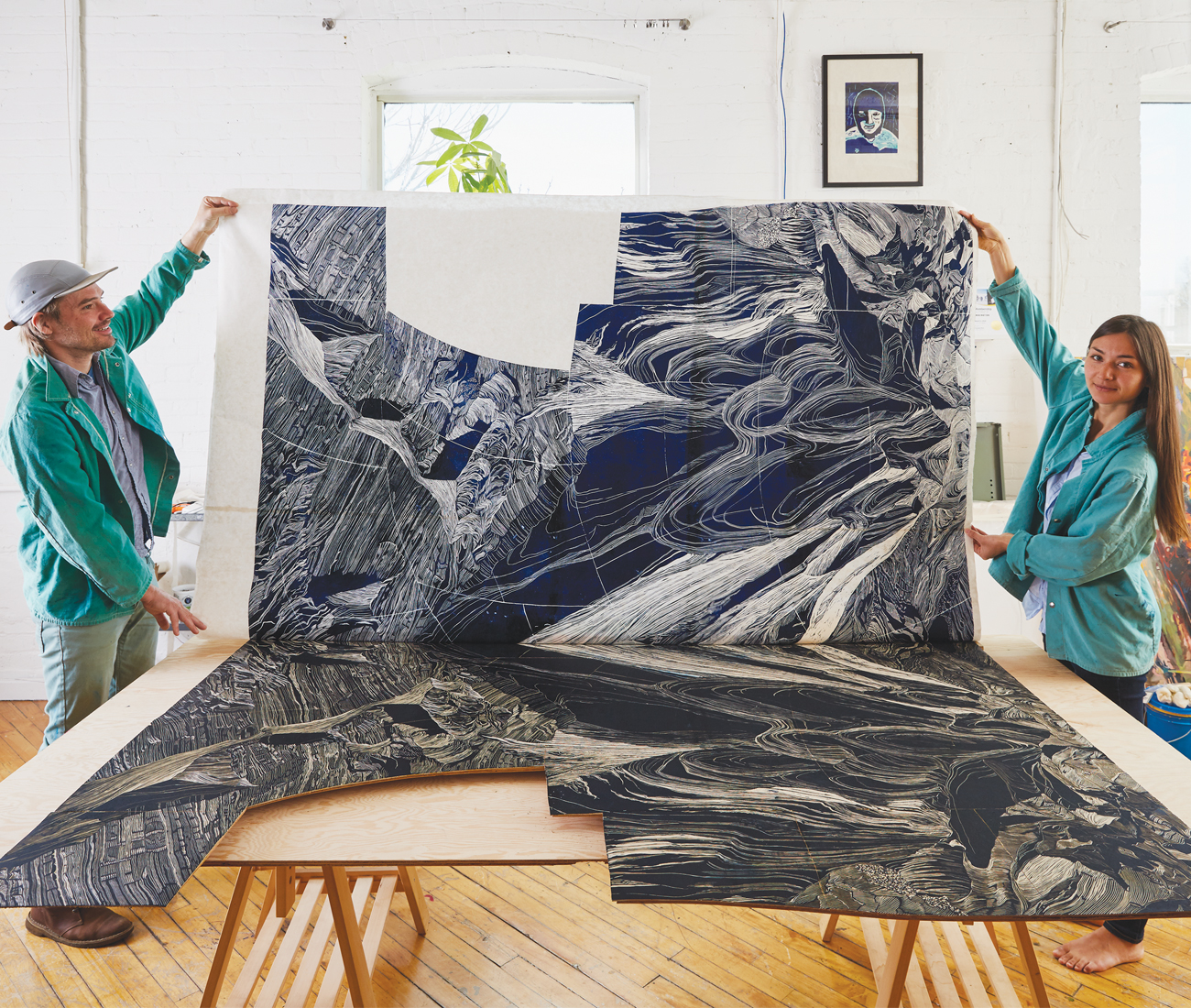 PA System’s Patrick Thompson and Alexa Hatanaka with a version of the lino-print they’re showing at the AGO. 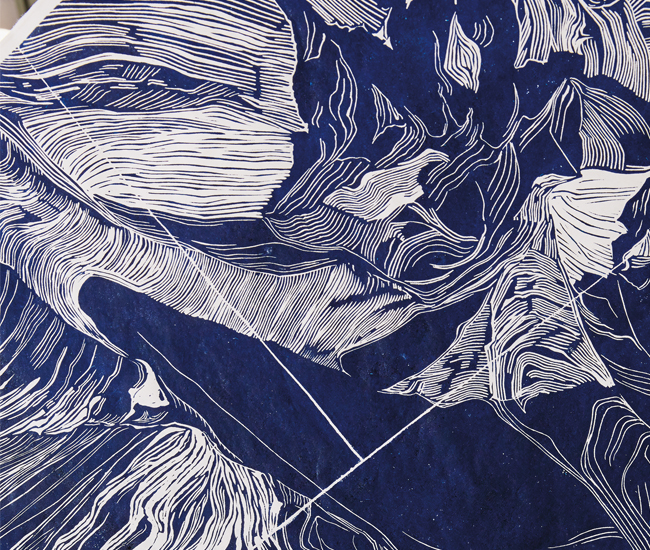 The limited-edition lino prints showing at AGO are 1.5 by 2.1 metres in size. Depicting snowdrifts that naturally form in the Arctic, the image was made over four months. It is printed by hand with spoons on Haini Kozo shoji paper from The Japanese Paper Place using an oil-based ink. 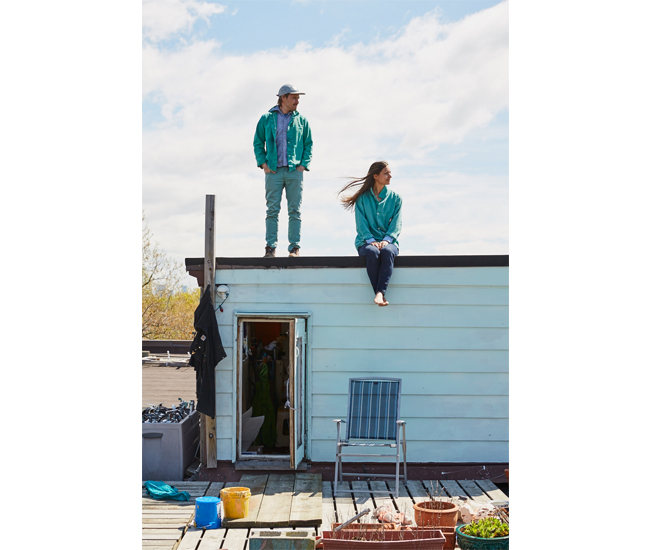 The two artists atop their Parkdale live-work space. They use the rooftop to prep and dry various works. 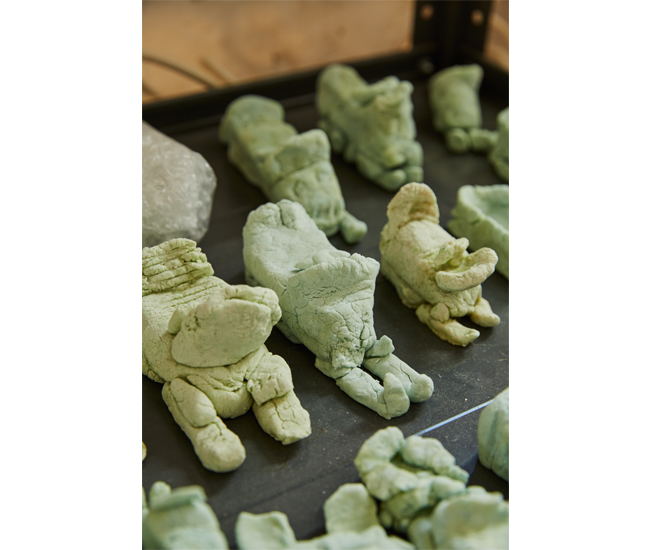 Miniature snowmobiles were made by Cape Dorset youth using homemade playdough. These were then scanned at U of T and then sized up and 3D printed by PA System. 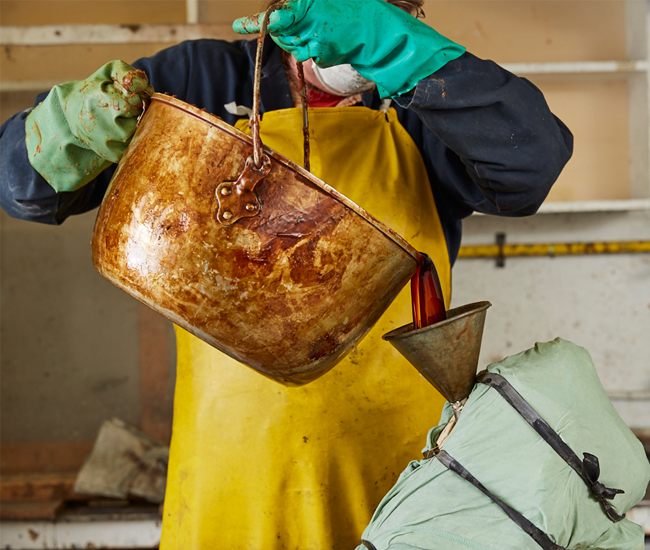 Using PA Systems’ moulds, George Farmer of OCAD U remade the snowmobile sculptures and then cast them in aluminum from material salvaged from the former Peter Pitseolak High School in Cape Dorset. 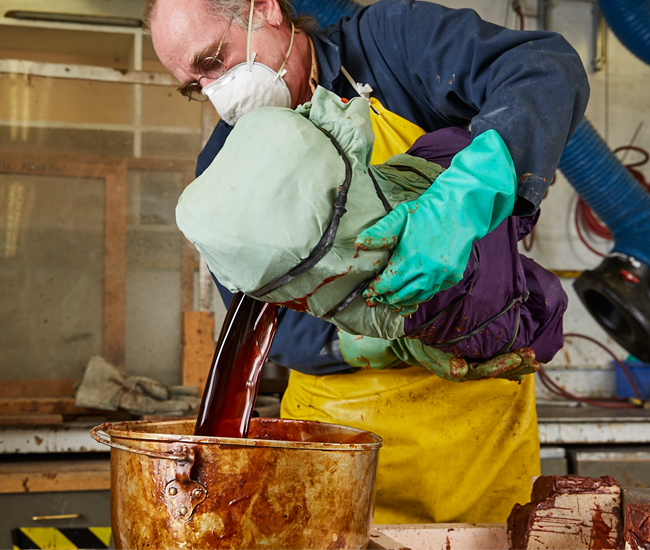 It takes several steps to pour and drain the moulds of wax. 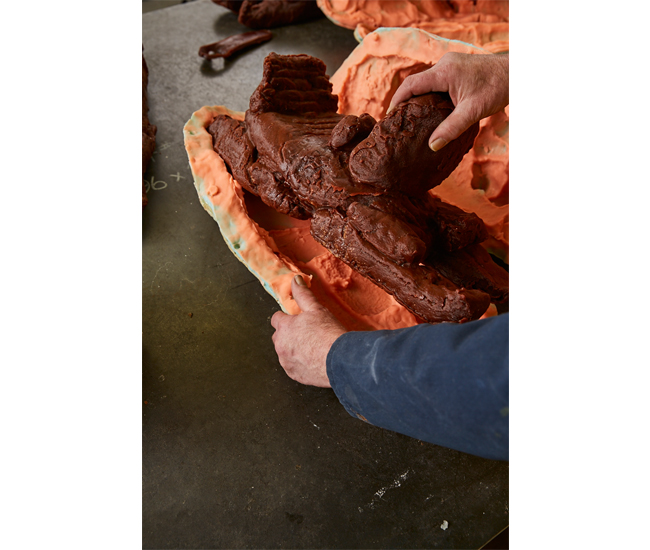 George Farmer removes a snowmobile from its shell. PA System will show four aluminum cast snowmobiles at the AGO exhibit. 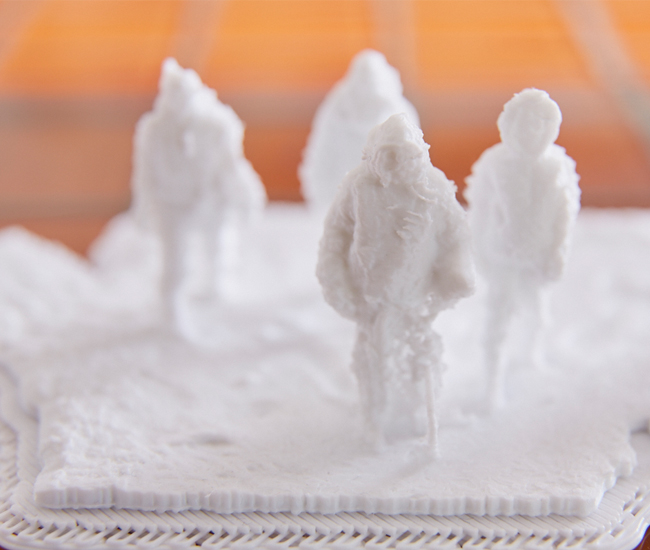 The PA System also scanned the makers of the snowmobile sculptures in Cape Dorset. These figures were 3D printed here in Toronto. 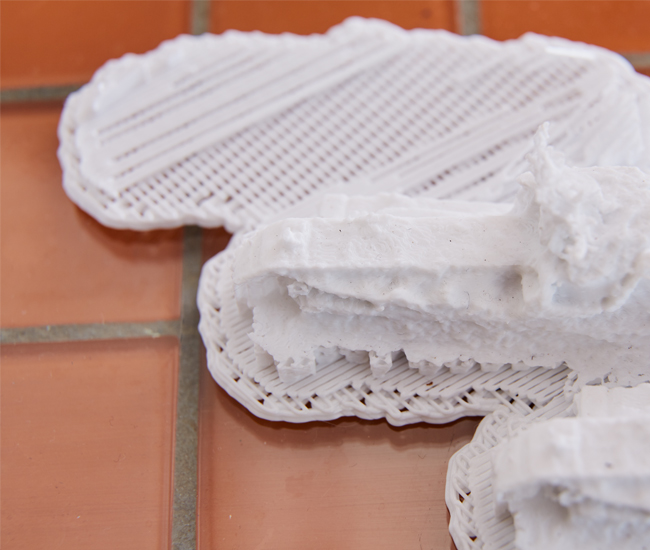 At the southwest corner of Trinity Bellwoods Park, an old, nine-metre-tall mural by Alexa Hatanaka and Patrick Thompson is visible. The cradling hands, hidden figures and unfamiliar landscape are rendered in bold colours and fine details. Though fading, it still speaks to the subject matter at the heart of these artists’ work, and to truly understand it, you must travel as far north as Canada goes.

Thompson came of age in Ottawa’s graffiti scene and met Hatanaka in 2010, while she was studying printmaking and material arts at OCAD University. He had already created murals in northern communities and when she joined him, the artists fell in love with the region.

As commissions came in from hamlets like Igloolik and towns in northern Quebec, the duo – called PA System – wanted to involve the youth they met. “When the opportunity came up to paint a mural in Cape Dorset in 2014, we were determined to offer a robust workshop for youth,” says Thompson. “That set the stage for getting a real sense of what youth were keen on but not accessing.”

That’s how Embassy of Imagination, an arts initiative for these youths, came to be. Hatanaka and Thompson – who live and work in Parkdale – now spend three months of the year in Cape Dorset, and have invited teenagers from the community to paint murals in Toronto and Montreal.

In addition to upcoming projects in Chettipalayam, India, Hawaii and Toronto, PA System recently contributed an installation to the AGO’s Every. Now. Then: Reframing Nationhood exhibition. Some of the materials for this work came from the remains of Cape Dorset’s high school, which was destroyed by arson and is currently being rebuilt. Flooring scraps were used to create a giant lino-print of stylized snowdrifts, and salvaged aluminum was cast in the form of snowmobiles. These were originally modelled by the kids in Cape Dorset using homemade playdough, scanned and then enlarged in Toronto with a 3D printer.

“We not only want to share our personal experiences – the joys and concerns regarding our favourite place on earth – but we felt it necessary to find a way to help bridge the gaps we observe,” says Hatanaka. “The youth lack services and recreational programs; many lack the necessary equipment enabling them to access experiential learning of their own culture and traditional knowledge. Engaging the youth helps them to create the reality they want, with art.”

To that end, sales of the cast snowmobiles go to purchasing actual vehicles, and paying elders to guide youth trips out onto the surrounding land to hunt or ice fish. This encourages intergenerational learning and contributes to improved mental health and wellness. “We’re drawn to the disconnect that exists between the southern art market and the reality of the North,” says Thompson. “This project revolves around accessibility. We’re trying to encourage the art world to give back to the youth we work with.” 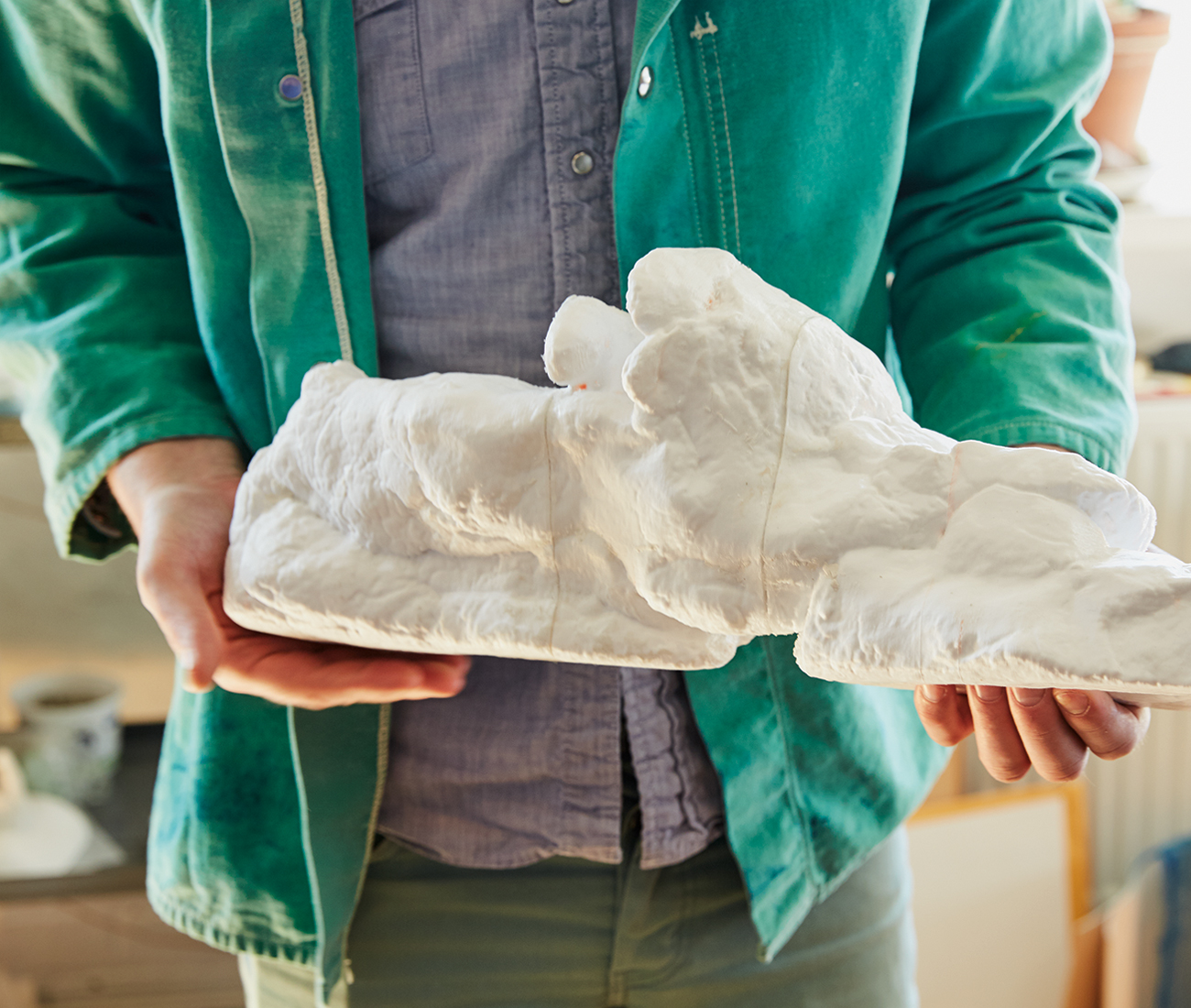 PA System’s AGO show includes cast snowmobiles that will be sold to buy actual vehicles. Five Cape Dorset youths – Christine Adamie, Nathan Adla, Lachaolasie Akesuk, Moe Kelly and David Pudlat – crafted miniature versions using homemade playdough. These were scanned by U of T’s Giles Morrow, 3D-printed by PA System and cast by OCAD U’s George Farmer in metals rescued from Cape Dorset’s former high school. “The Elders Council, youth and community at large have wanted a consistent land-trip program for a long time but there has been a lack of resources,” says PA System. “These snowmobiles demonstrate how art can play a bigger societal role.” 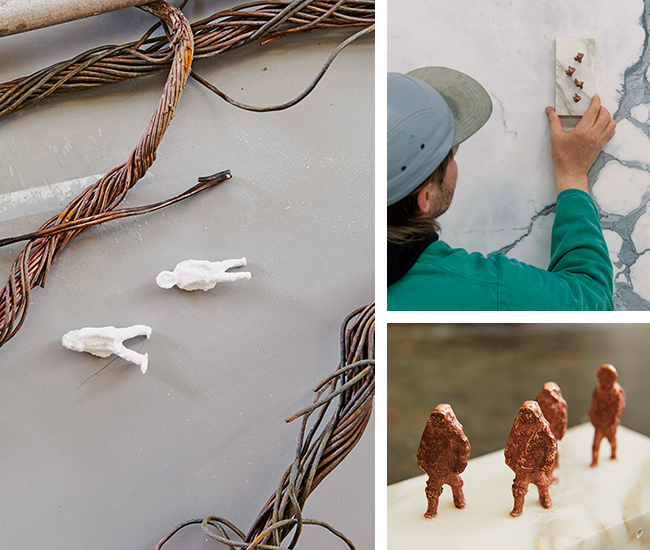 Book-matched slabs of Calacatta marble with small figures attached to their surfaces are also part of the AGO installation. The figures are 3D-printed scans of Cape Dorset youths, cast in reclaimed copper wiring by Fair Trade Jewellery Co. “Marble is an object of extreme luxury, power and privilege,” say the artists, “but it has the uncanny appearance of an aerial view of the arctic when the sea ice breaks up in the spring. Visually, as a raw material it is stunning, but we hope the marble prompts discussion around inequity in this country, and that there is more value to the north than concerns over sovereignty and resource exploitation.”