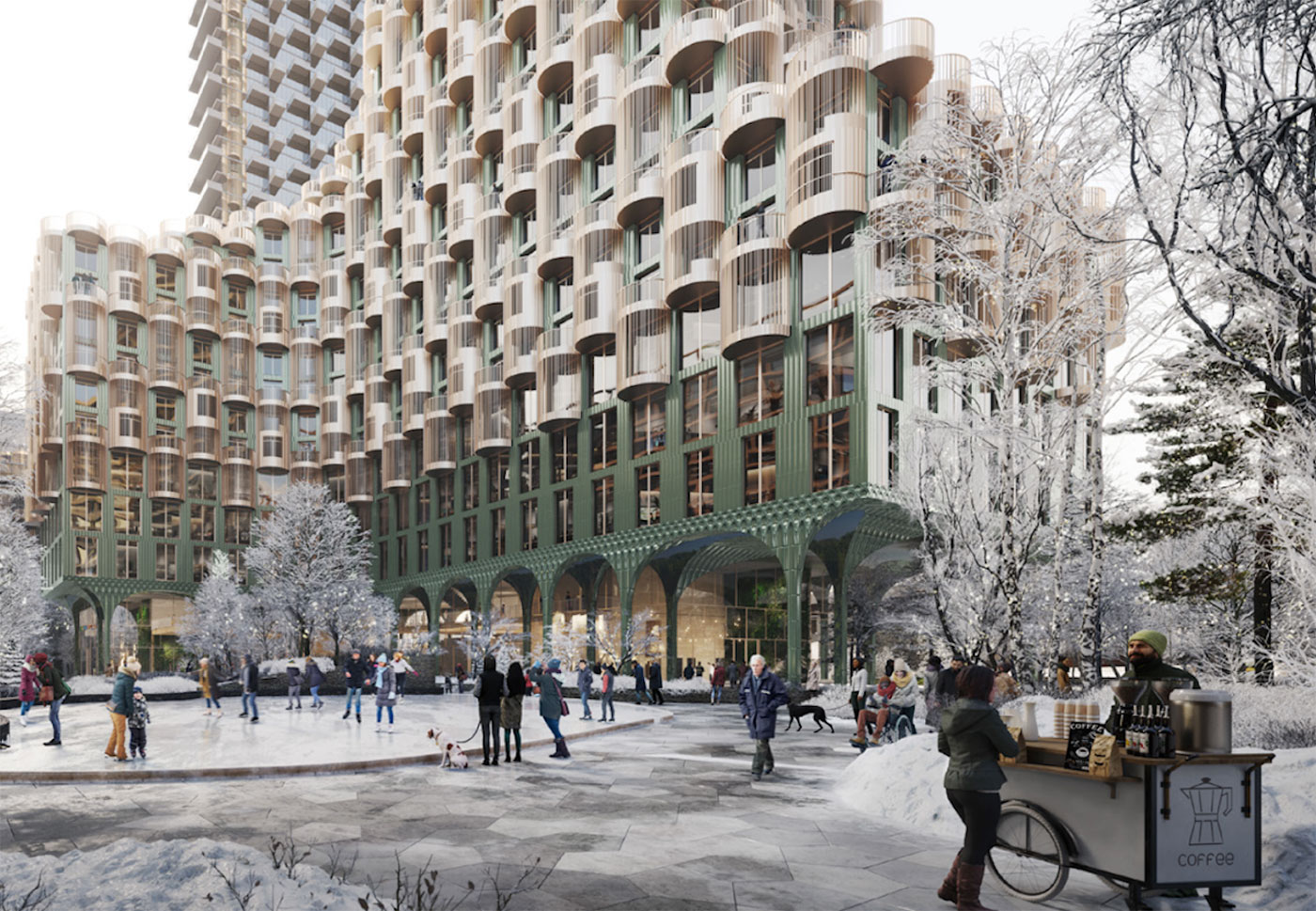 Toronto condos have become synonymous with the city’s urban identity and rapid population growth. Though at times a divisive topic, the towers reshaping neighbourhoods across the city have contributed to Toronto’s global appeal as a destination for metropolis living—with more active cranes operating across the city than any other in North America. In the midst of a busy development boom, these noteworthy projects are standing out from the crowd. 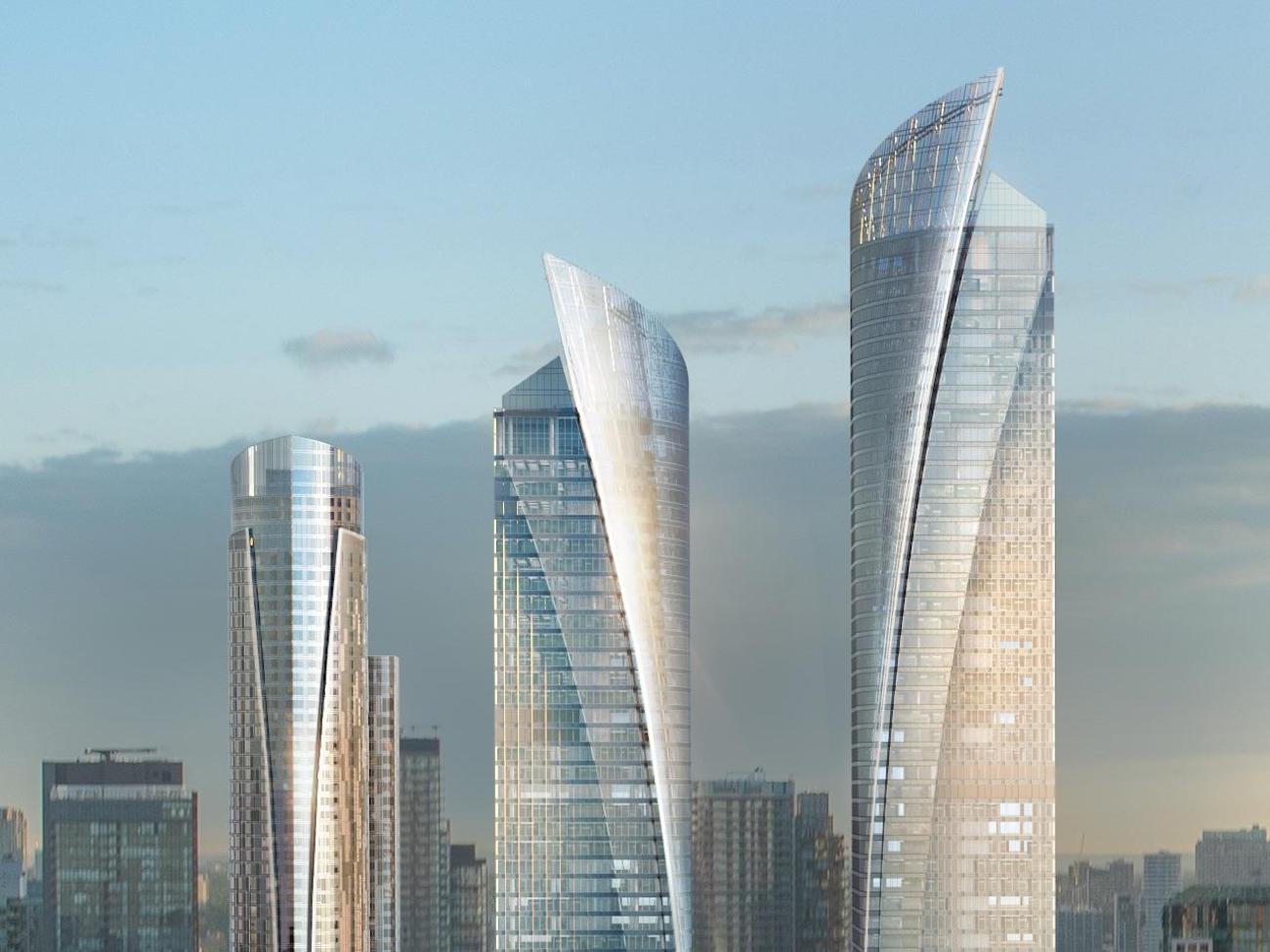 Office, residential, retail and public green spaces are the four building blocks of Union Park—a new development proposal by Oxford Properties Group, the real estate firm behind the Financial District’s EY Tower. The multi-use complex will sit adjacent to the Rogers Centre along a 4-acre site and house roughly 800 rental units. Its largest of four buildings will stand at just over 300 metres tall and offer towering views of the downtown core and Lake Ontario, in addition to the Union Park Overbuild park, a 1.9-acre park proposed to be constructed on a deck above the Union Station rail corridor. 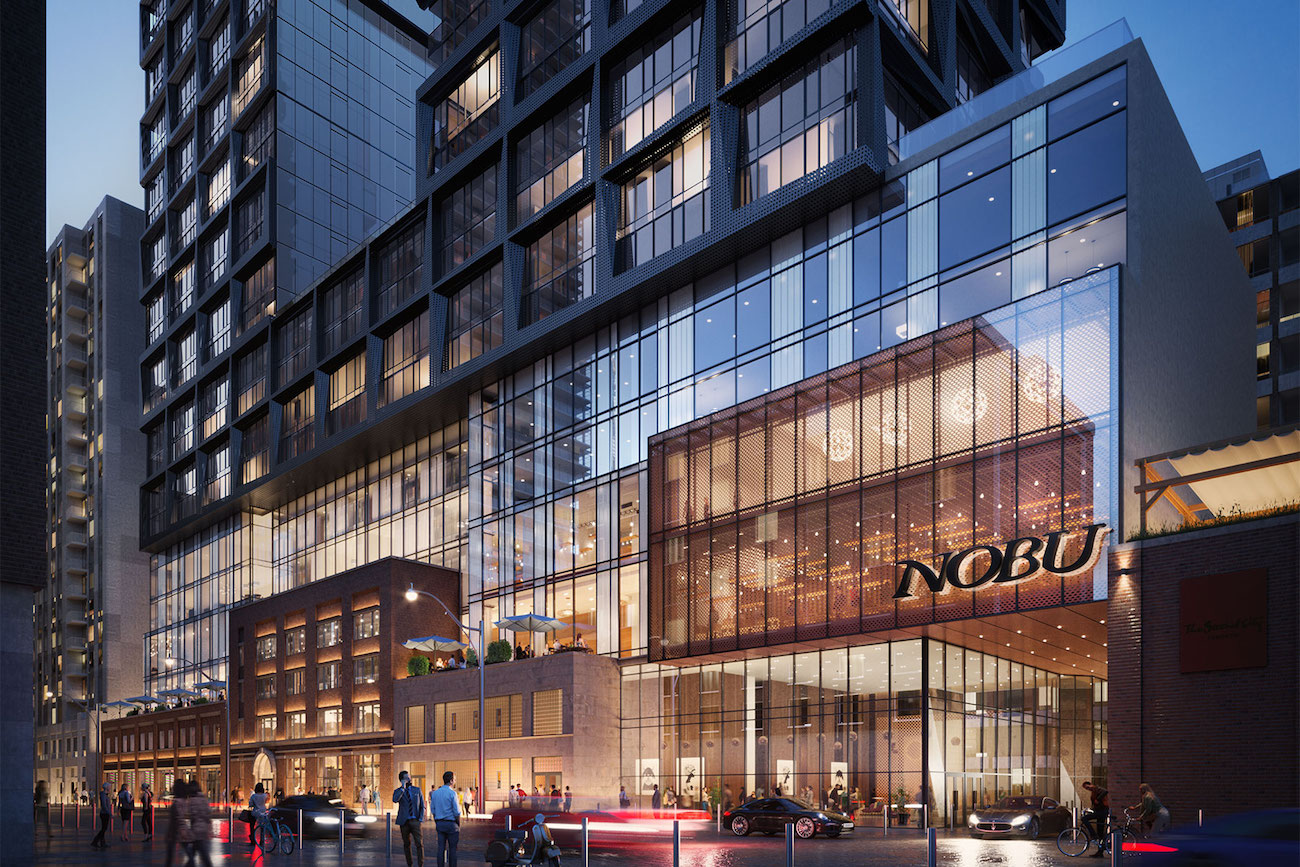 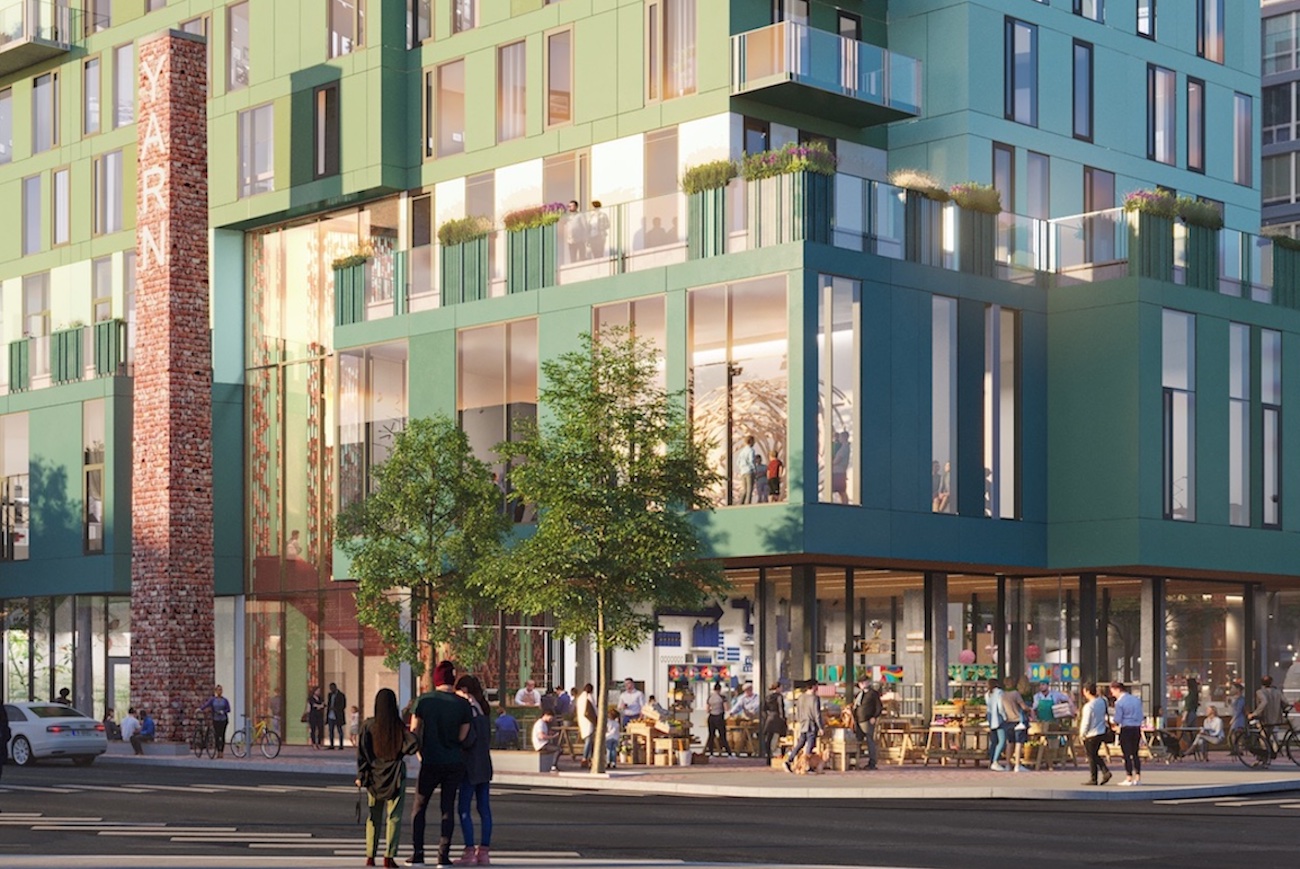 With a graffiti-tagged facade and peek-in views of spacious loft-like studios, the four-storey warehouse at the corner of Dupont Street and Ossington Avenue has had many lives. Originally a yarn-spinning factory, the site is set for a rebirth after nearly a century of occupying the Dovercourt Village intersection. A new 14-storey mixed-use rental building by TAS will soon sit on the northeast corner, bringing 155 purpose-built rental apartments zoned for live/work—10% of which are aimed to meet affordable housing standards. The ground floor design will optimize multi-use space for community gatherings, exhibits and markets. TAS has also announced its exploration of additional opportunities like co-working spaces, lounge areas, small-scale retail and a cafe. 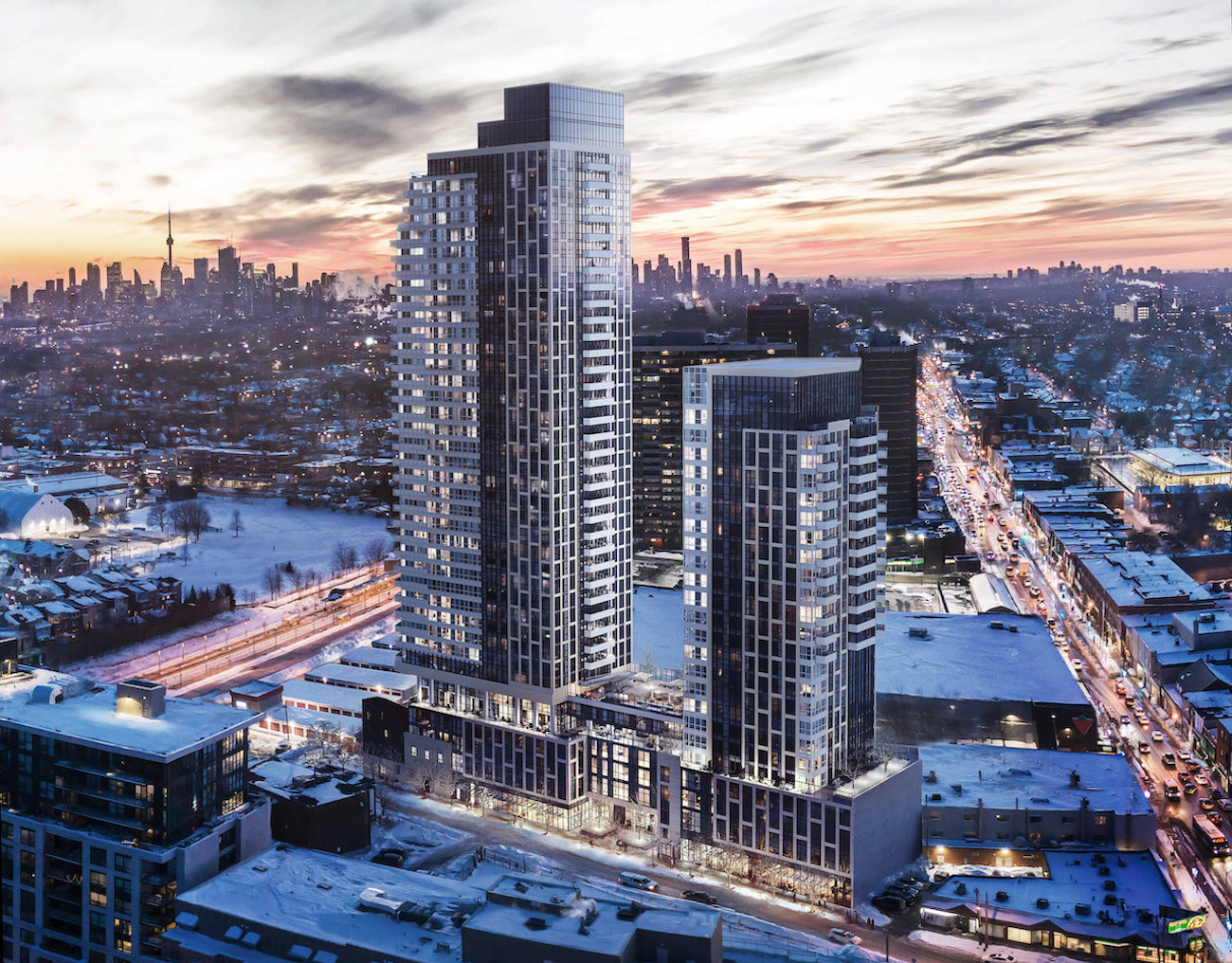 Bordering Scarborough, The Dawes by Marlin Spring Developments is set to begin construction in the spring of this year. Tucked off of Danforth Avenue, the zone has garnered a transit score of 93/100 and a walk score of 91/100—enhancing its demand for high-density residential and commercial development—not to mention public services with a revived Dawes Road Library currently in the works. The proposed 38- and 24-storey mixed-use condominium will include 616 dwelling units, a U31-designed lobby and amenities spaces, plus a daycare facility built into a renovated 1906 grain elevator and mill at its base. 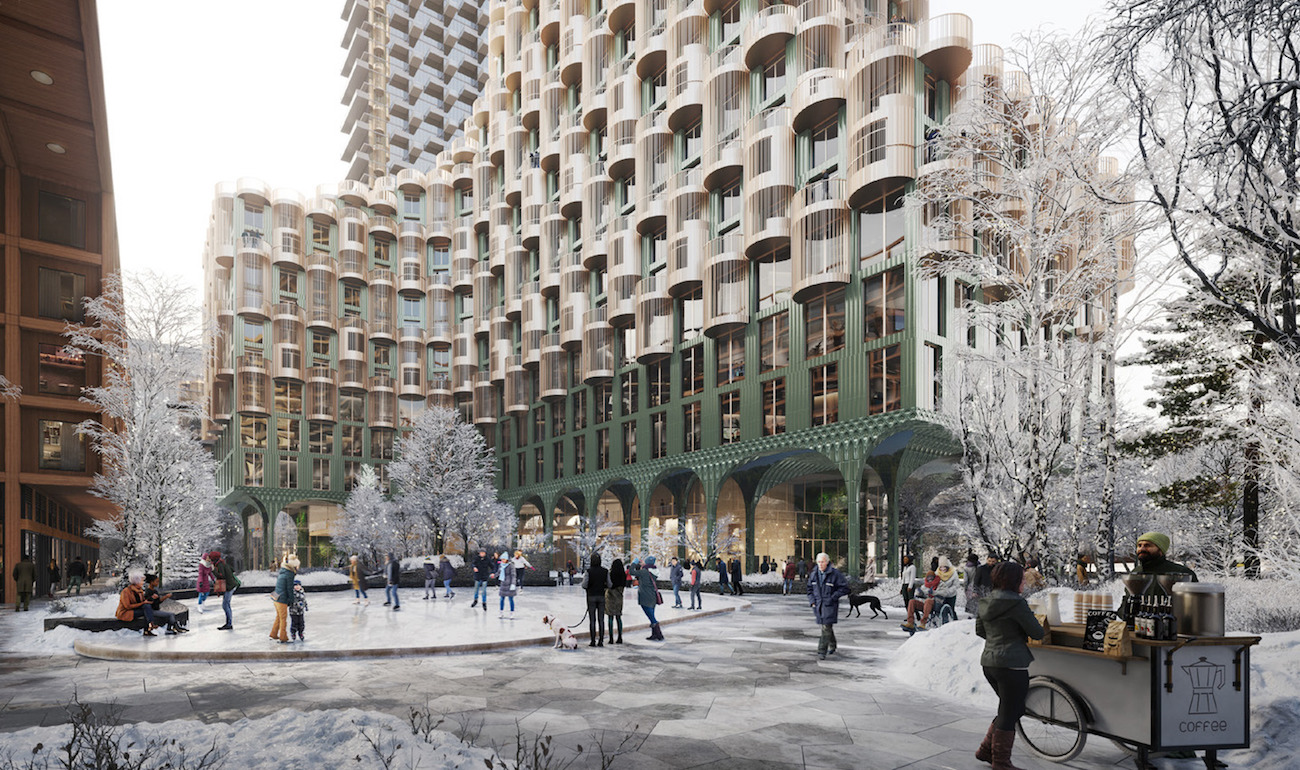 The Western Curve at Quayside

The proverbial north star of booming eco-conscious Toronto condos, Lake Shore Boulevard’s Quayside project proposes the city’s first electric, zero-carbon community along its eastern waterfront. Local developers Dream Unlimited and Great Gulf Group – together known as Quayside Impact – were selected to develop the mixed-use community led by Waterfront Toronto in tandem with project partner Mississaugas of the Credit First Nation. Among renderings of the project’s five towers released early last year, the Western Curve is a standout. Distinct in its arched façade with balconies featuring wooden lattices distributed in clusters on the upper floors, Western Curve will house the largest portion of 4,300 housing units to be distributed across Quayside. 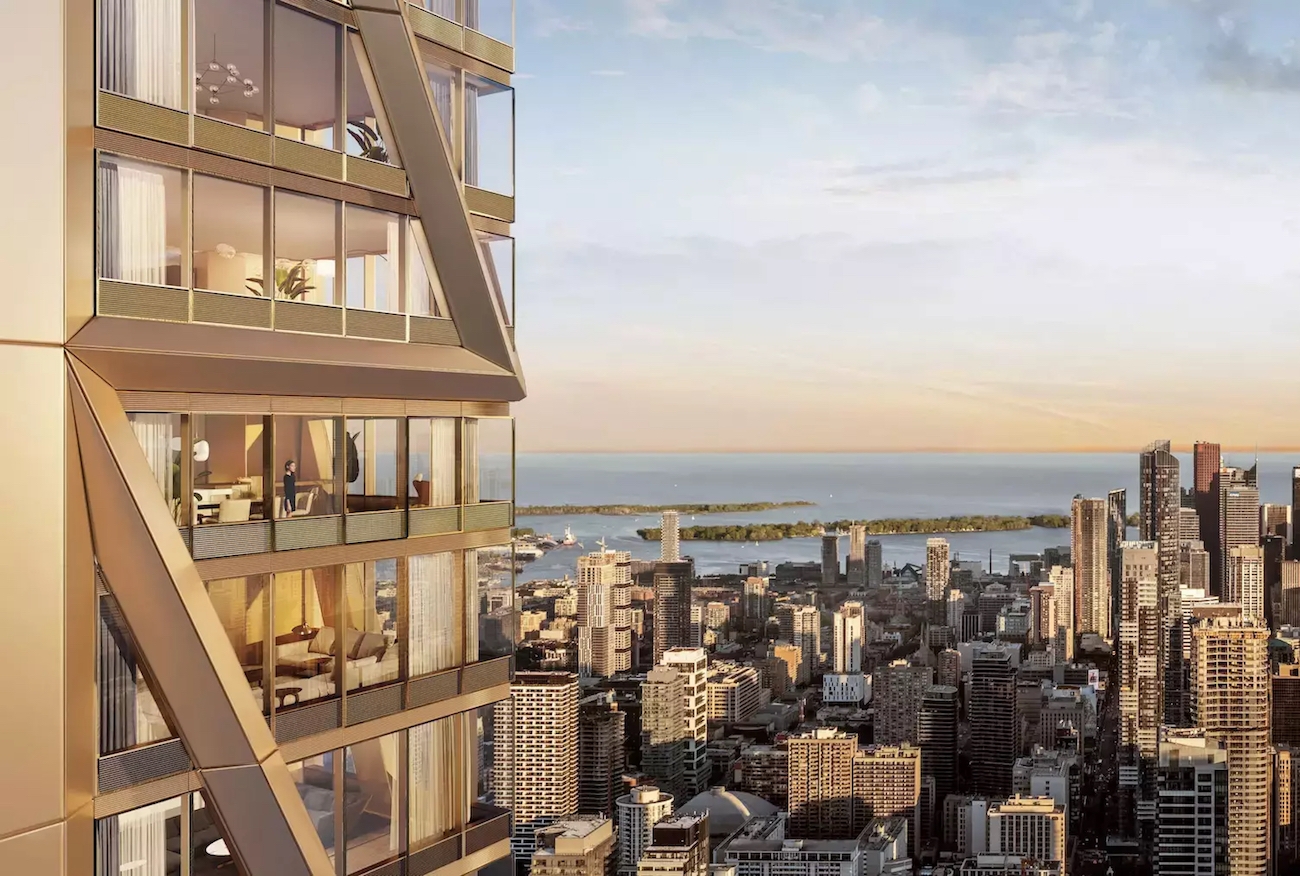 One of the most highly-anticipated Toronto condos on our list, The One by Mizrahi Developments is a luxury hotel and rental building plotted for the vibrant Yonge and Bloor intersection. Though approved at 85 storeys, the developer is seeking an increase of nine floors which would mark the 338-metre-tall proposed structure as the tallest residential building in Canada — a height nearly mirroring the CN Tower’s observation deck. Coined “The Limited Collection,” the top 23 levels of The One are devoted to ultimate luxury residential living, where a multi-level residence with an unlimited number of rooms can be created. Here, residences are designed to be completely customized. 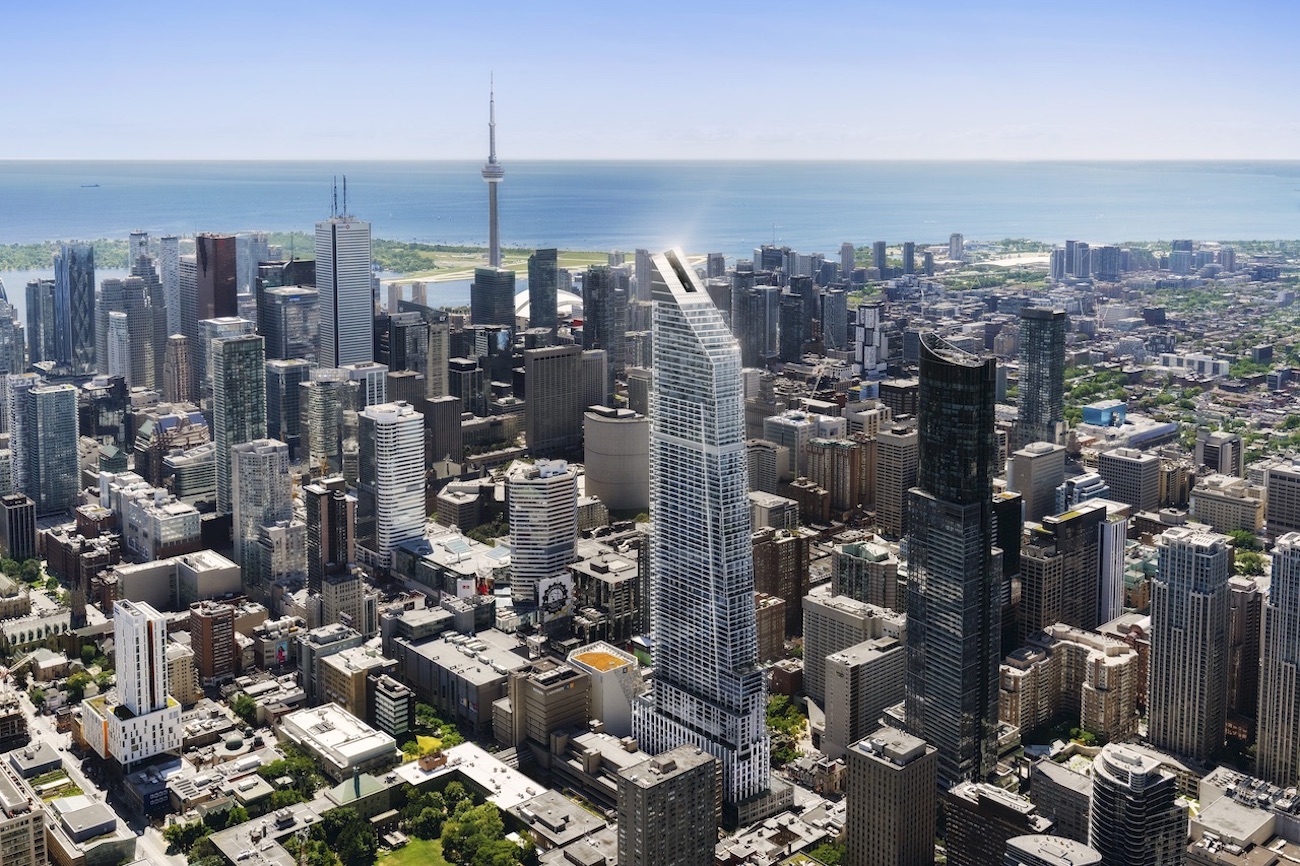 Only a few short blocks south of The One, an 85-storey mixed-use condo will join a cohort of skyscrapers in the downtown core. Concord Sky’s steel-frame facade and jagged point designed by world-renowned KPF architects fit the city’s expanding skyline while still distinguishing itself from neighbouring giants. Proudly named after developer Concord Pacific, the project broke ground in 2021 and will house more than 1,100 residential units. 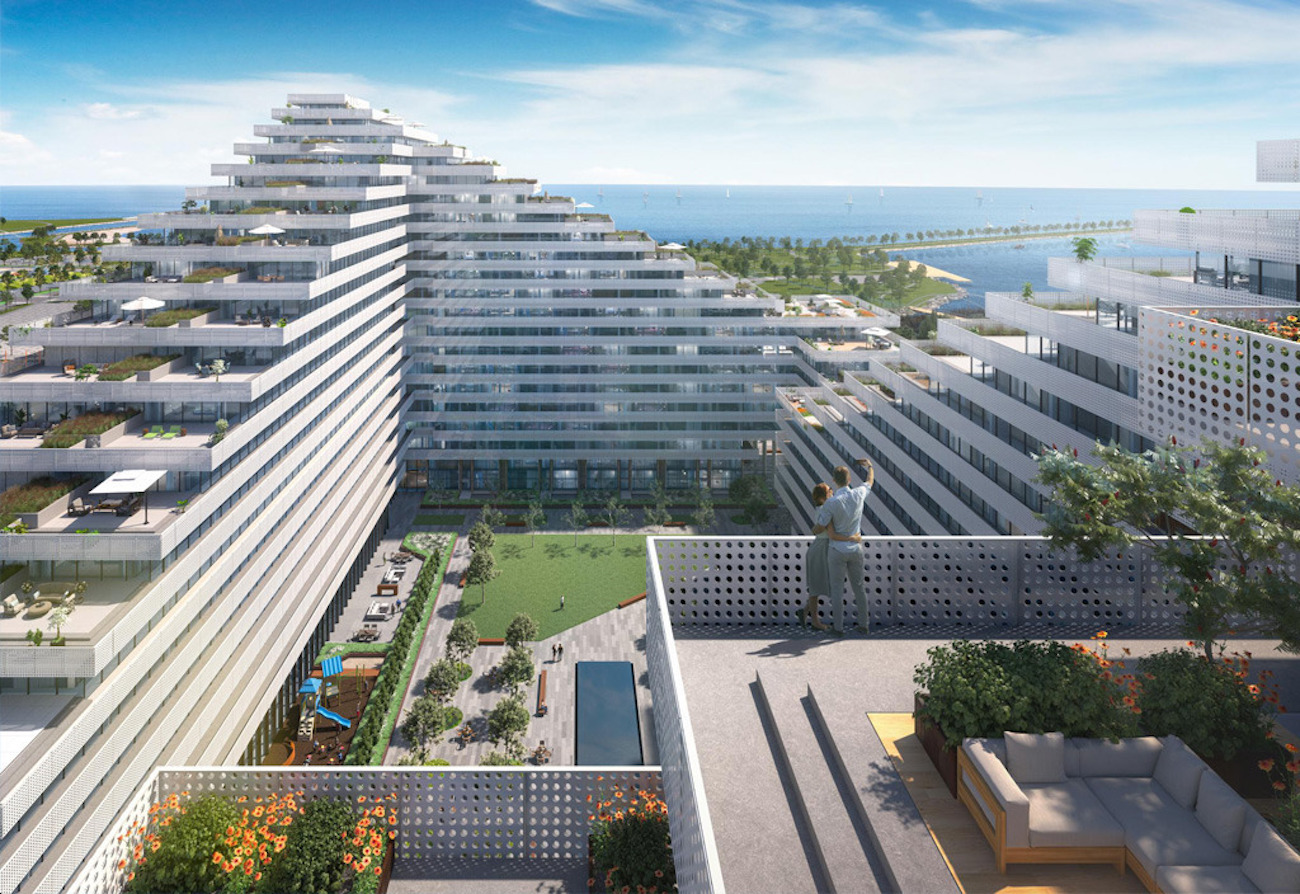 West of the city along Mississauga’s shoreline, the Harbourwalk Condos by Tridel have commissioned architectsAlliance and II BY IV DESIGN for the design of two remarkable, eye-catching buildings with a series of stepped setbacks, connected by a vast courtyard. The pyramid-like structure is part of a larger development project poised for Mississauga’s Lakeview Village and will offer four collections of suites ranging from large luxury terrace suites to boutique-style units with courtyard views. A Mediterranean spin on typical Toronto condos, Tridel envisions Harbourwalk as a destination for “resort-style life year-round.” 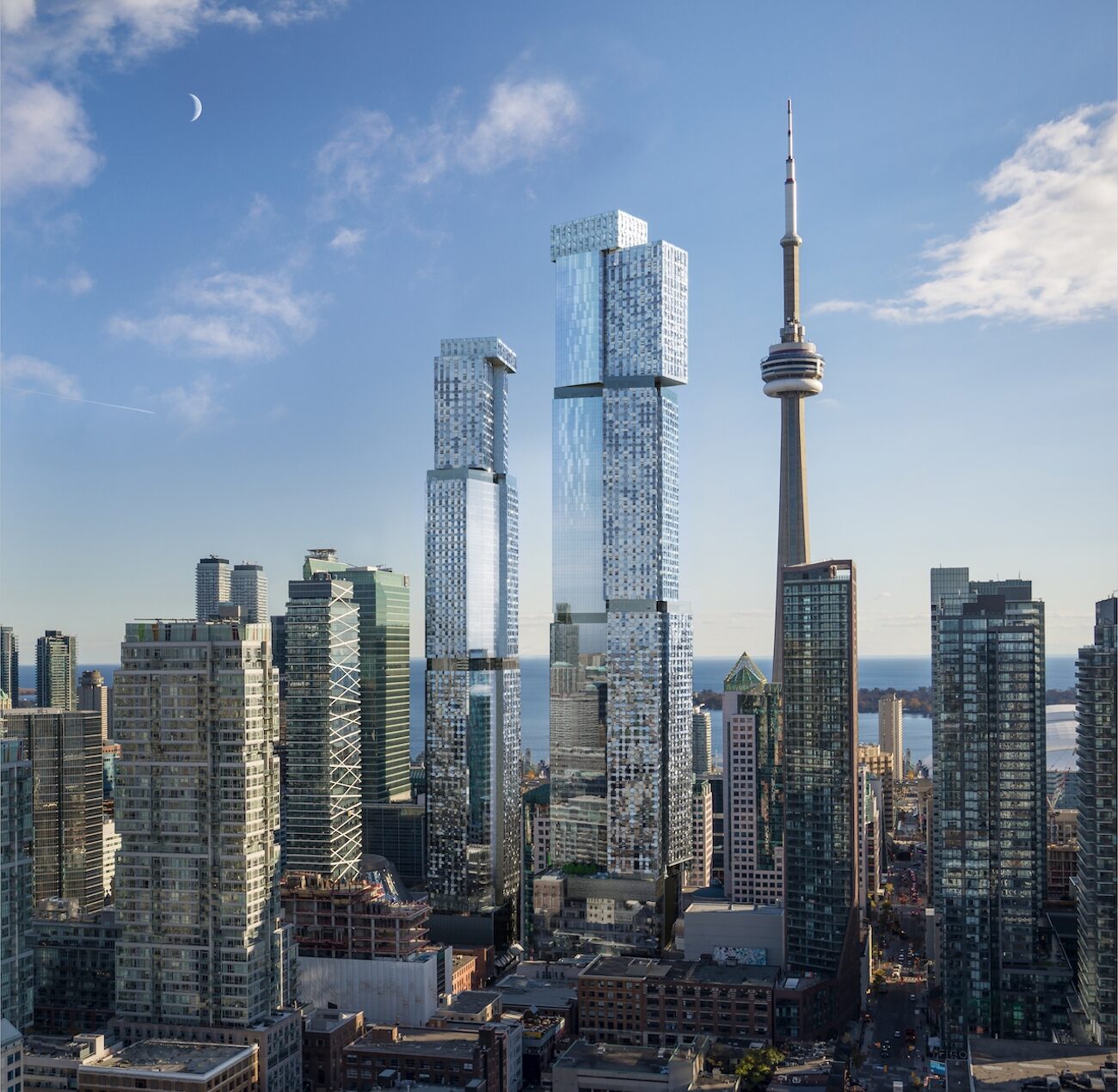 It’s been more than a decade since the two gleaming, stainless-steel-clad residential buildings by legendary architect Frank Gehry were announced for construction in Toronto. Though patience is wearing thin, the sculptural Forma Towers are anticipated to change the city skyline forever. New renderings of the Studio Paolo Ferrari-designed amenities have sparked excitement once again, confirming the Toronto condo’s icon status. Presenting world-class architecture and interior design, the 73 and 84 storeys-tall buildings will be Frank Gehry’s tallest residential towers yet, offering breathtaking views, bespoke suite finishes and a network of creative coworking spaces unlike any other in the city. 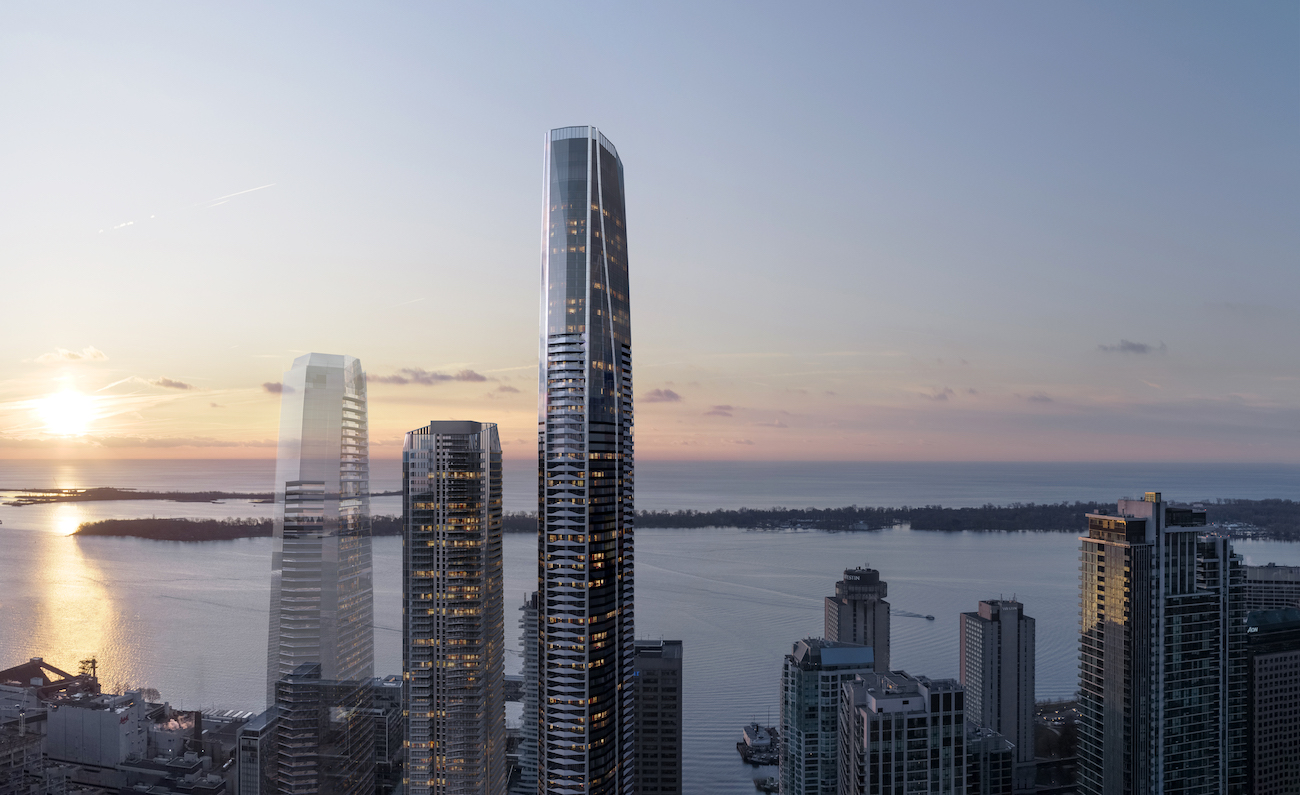 Unmatched lake views and interior design by Toronto’s own Tanner Hill and Associates are two of the many selling features developer Pinnacle International has boasted for SkyTower. Duking out the spot for Canada’s largest residential building with The One, SkyTower’s tallest of three structures will peak at just over 344 metres (with a proposal for an increase). The three Toronto condos that make up SkyTower will bring over 2,500 residential units to the downtown core, along with a hotel, community centre, and residential connection to the PATH.