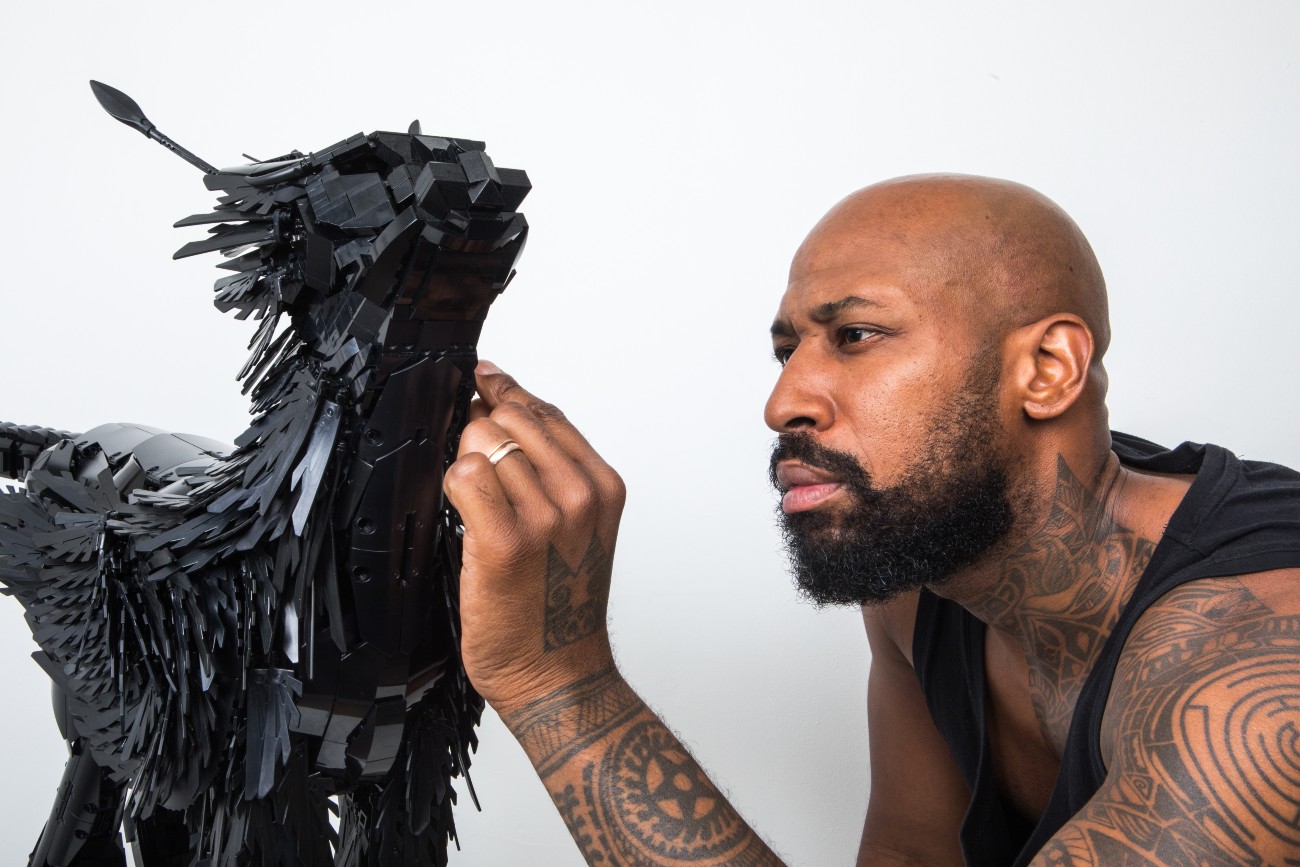 With sculptures rooted in Afrofuturism and African mythology, the Ghanaian-Canadian artist is creating a new iconography

There is no separation of art and design for artist Ekow Nimako. Through his Lego-made creations, he masterfully reimagines African architecture and artifacts, and sometimes disregards them entirely to engineer his own, with futuristic themes. With their roots in Afrofuturism and African mythology, Nimako’s sculptures expand Black diaspora folklore and iconography by using storytelling to situate his pieces simultaneously within our world and worlds of their own.

The Ghanaian–Canadian artist, who first played with Lego as a child, had his interest in the plastic bricks piqued again when he began purchasing sets for his children. Playful construction became earnest art-making, and in 2014, he had an epiphany that informed his current approach. “A lot of the merit of a Lego creation is that it’s made of Lego,” he says.

“I strive for my work to be engaged with for its formal quality and content, to transcend the material and the expectations of what that material can achieve.”

For Ekow Nimako, who weaves between bins of meticulously catalogued black Legos and free-standing sculptures while working in his basement studio in Leslieville, it is imperative that his forms transcend their physical confines and be regarded as otherworldly. By the same token, his work acknowledges, honours and affirms the traditions of African art by placing it in spaces – like Toronto’s Aga Khan Museum, which recently acquired Nimako’s 2.7 square metre, 100,000-brick cityscape, Kumbi Salah 3020 – where it would likely not otherwise exist.

“Someone will be able to Google Anansi,” he says of the mythical spider (known as a trickster god in West African, African–American and Caribbean folklore, and the subject of a work in progress), “and find a fine art sculpture made of black Lego by a Black artist. It became important to me to do these things and make sure that they exist in some way.”

The artist first discovered Anansi by way of a non-Black author, and it was then that he decided to use his work to subvert how the white gaze may misconstrue Black storytelling. Anchored in a framework Nimako calls “speculative reclamation,” his skepticism-guided interrogations of African legends, myths and folklore afford him ways to build upon pre-existing narratives or exchange them for new ones. And he’s added gravitas to African and Black diasporic mythology within the world of fine art through two critically acclaimed and ongoing bodies of work: Building Black: Civilizations re-conceptualizes societies and civilizations like his native Ghana, while Building Black: Amorphia interpolates African mask-making traditions. These are mythological recreations of Nimako’s own invention that, in an effort to reclaim Black mythology-making, shun the assumption that Black creations are antiquated cultural artifacts and proves that they can be established and appreciated contemporarily. EKOWNIMAKO.COM