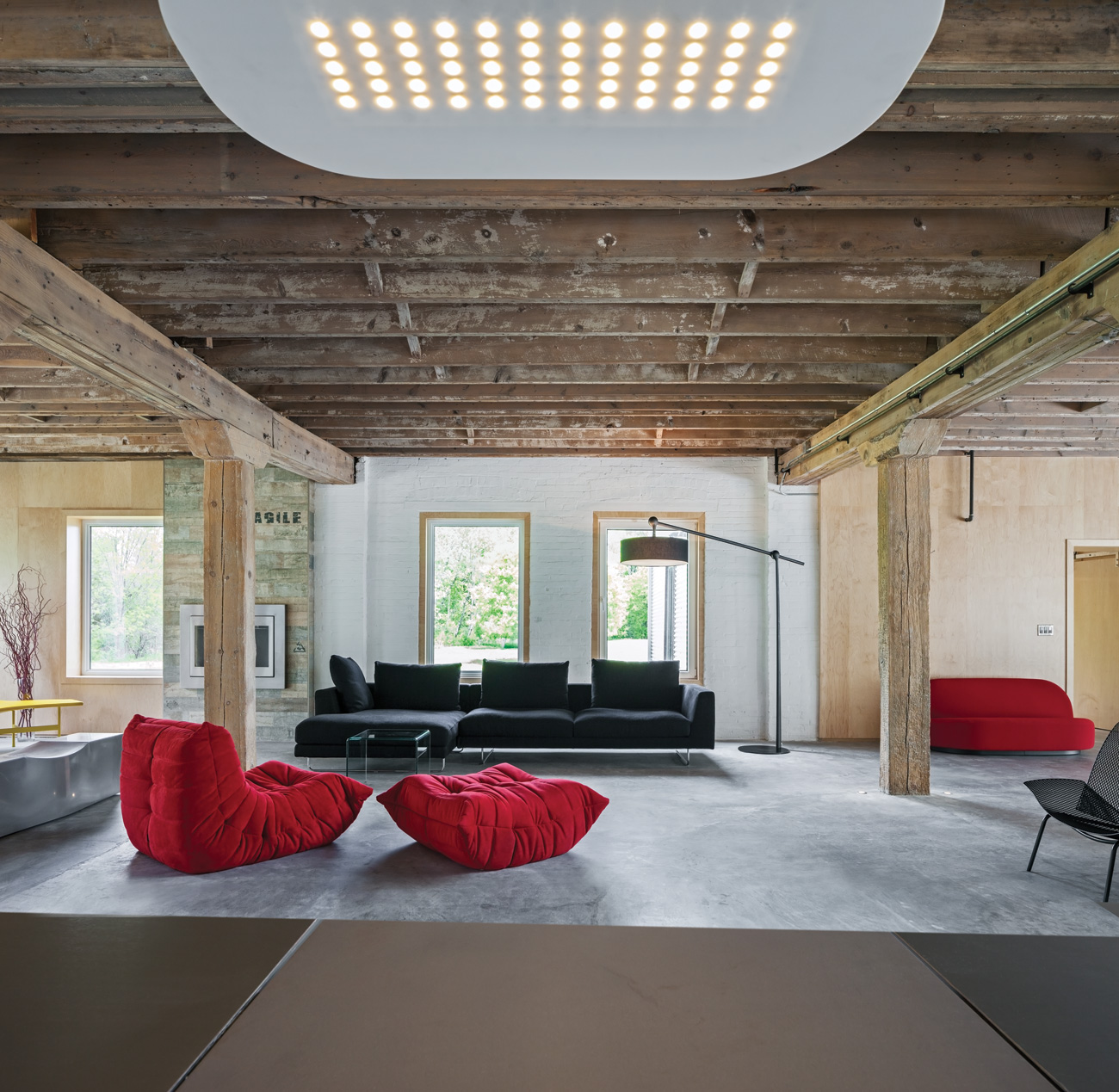 Transforming an old canning factory in southern Ontario into an idyllic getaway residence and event space.

When Toronto graphic designer Cliff Smith found it in 2005, the century-old brick and mortar cannery an hour’s drive east of Toronto was in ruins. The walls of the main structure needed mending, and the metal siding on the adjacent plank barn had been mostly stripped, scavenged and carted away. The 1.5-hectare rural site, located down a two-lane county road and with only one other house across the street for a neighbour, was a dismal spectacle. 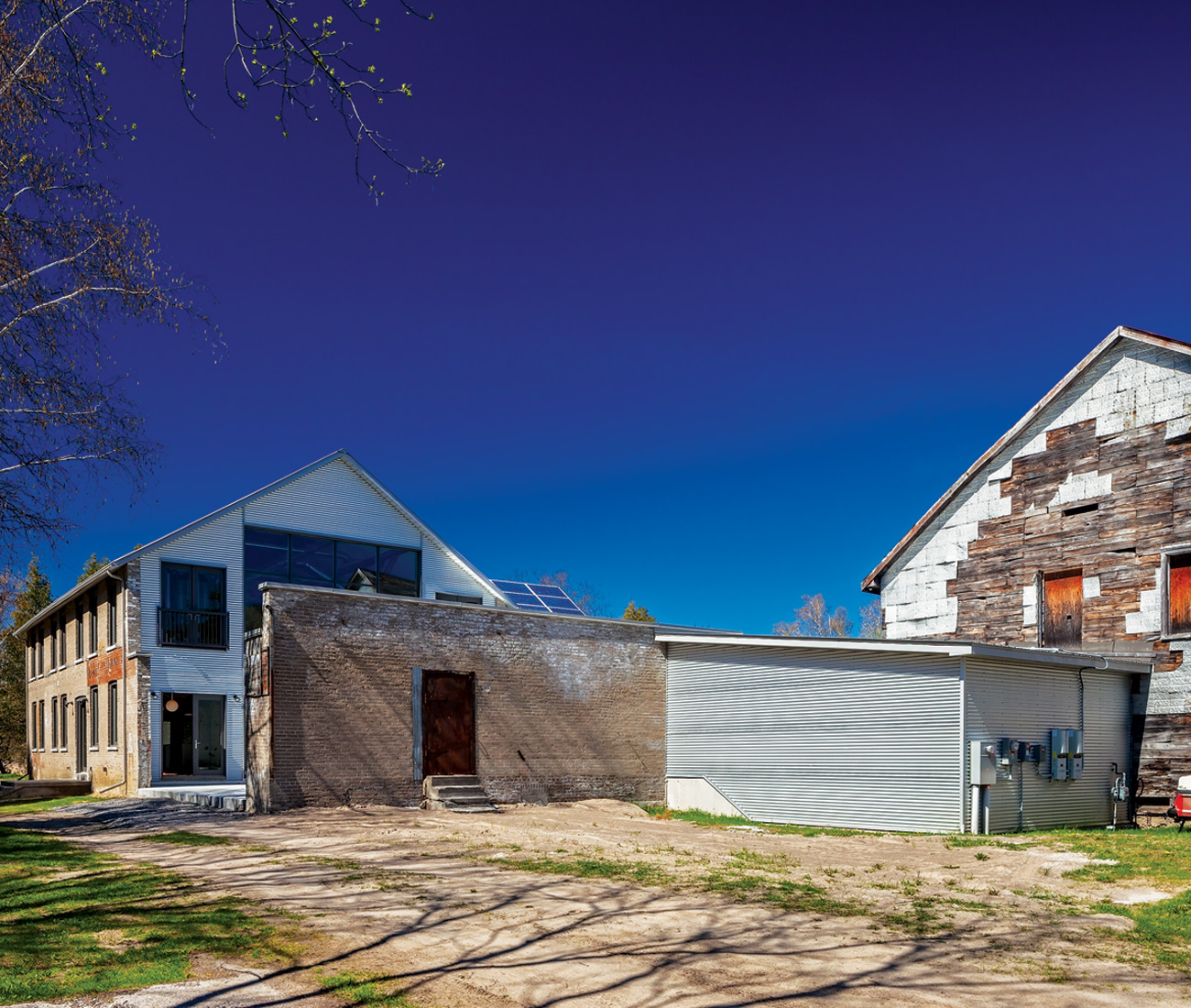 But Smith, as it happens, is one of those people who can see past dereliction into the bones of a building. The potential he glimpsed in the spacious two-storey factory excited him so much that he bought the place, and soon after embarked on a restoration that he has largely completed. The result of his 10-year labour is an attractive complex that now serves a couple of purposes, and could, if the owner’s ambitions are fulfilled, do more in the future.

At present, however, it serves as a weekend getaway for Smith and his wife. The couple have a choice of sleeping quarters, occasionally taking their rest in a tiny bedroom in the 37-square-metre annex he has attached to the east facade of the roughly 465-square-metre main building. Also on the upper storey of this extension is the sumptuous – and very white – bathroom, accented by black minimalist fixtures from Gessi Milano.

Or, if they choose, they can roll out sleeping mats on the floor of the nearly empty 230-square-metre upper storey, which is ringed by large windows and open to the south via a wide expanse of shade-free glass. Long, slanting poles hold up the high-pitched ceiling, and the brick walls are faced with maple panels that warm the big room and soften (without abolishing) its shop floor austerity.

Dining takes place on the lower level, where sofas and seating by the likes of Ligne Roset and B&B Italia fill the room. But visitors could be forgiven for believing that no cooking goes on here: the kitchen hardware is camouflaged within dark, nondescript oblongs designed by Smith and Toronto interior designer Jacques Dinel. When not in use, the stovetop, dishwasher and sink disappear behind sliding panels of stainless steel veneer.

One reason for keeping the kitchen visually quiet has to do with the dual use of the downstairs. It is also the trade showroom for Belgian manufacturer Vincent Sheppard’s Lloyd Loom furniture, which Smith distributes.

The chairs, ottomans and other pieces of Lloyd Loom are on display around this ground-floor space. The stuff resembles rattan, but it is actually metal wire wrapped in paper and woven into a tough fabric, which contrasts well with the renovated interior. Underfoot is newly poured concrete; the walls are brick, maple panelling, or glass; and the pillars and ceiling maintain the original distressed wood beams.

So far, Smith’s project has succeeded in doing what it was designed to, but if one of his plans comes to fruition the old factory will find yet another use. He envisions turning it into a resource for both the local community and city dwellers. Weddings, professional gatherings and musical concerts could be accommodated in the upper room. In fine weather, receptions and parties could spill out into the courtyard and onto the broad lawn. Whatever fate lies in store for it, Smith has already done a good job of rescuing a piece of Canadian manufacturing history, and repurposing it for the delight of those who live in the here and now.