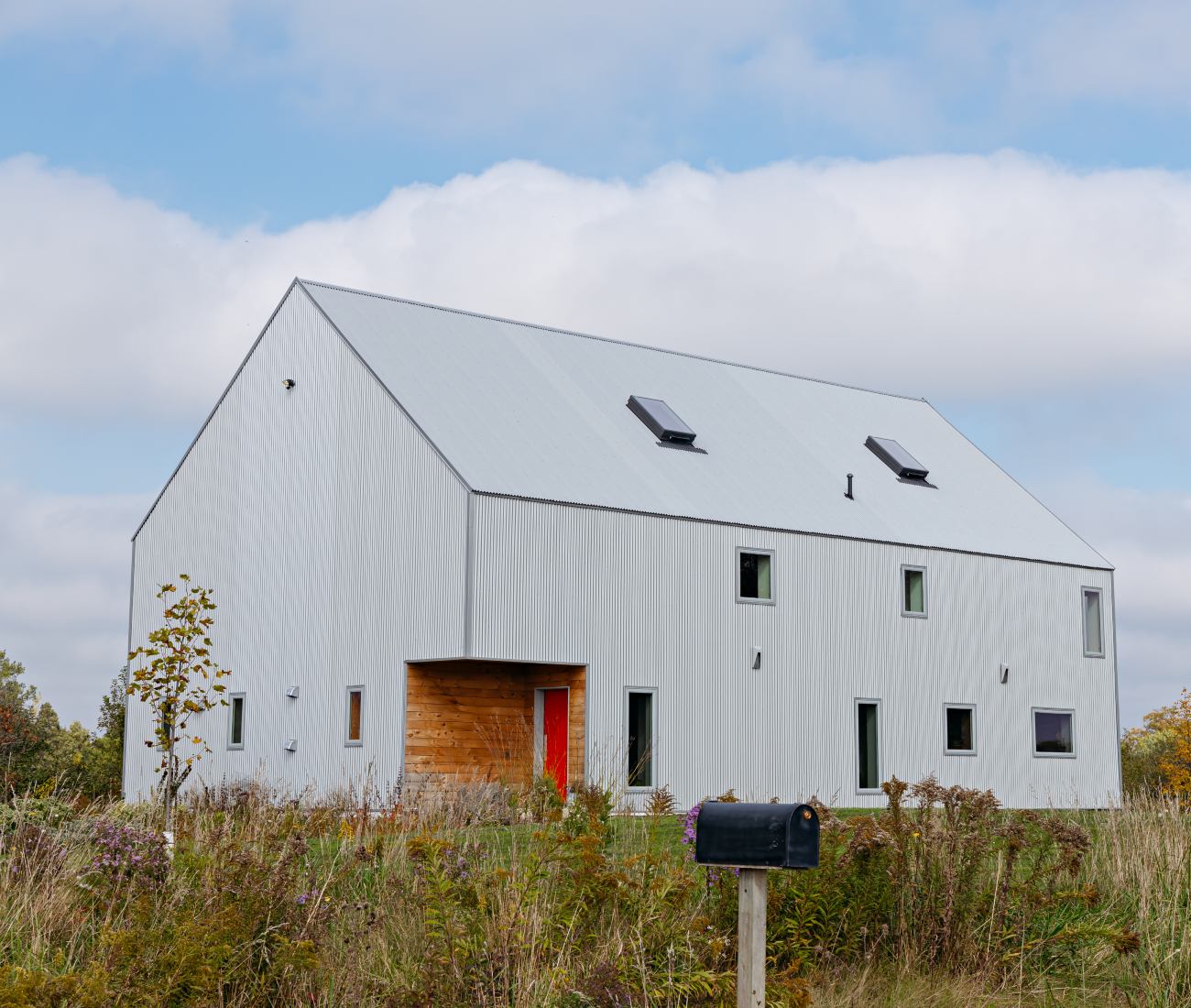 Nestled into the hillside of Norfolk County, this barn-like farmhouse is one Toronto couple’s perfect antidote for big-city fatigue

“It’s really the house that claustrophobia built,” says owner Dan Nuttall, who, along with his husband Frank Infante, was looking for some breathing space outside the city. “As we explored rural Southwestern Ontario, our eyes were drawn to the character of the wood barns – many dilapidated, some being restored, newer ones made of metal.” After scouting a few abandoned ones, their design plan solidified. “Those first impressions of barn interiors were thrilling, indelible. All that open space, light and rough-hewn timber,” says Nuttall, a retired landscape architect and professor. They also took their cues from biological research stations “where the buildings and the people within them are in constant dialogue with their natural surroundings,” as well as holy spaces. “I guess barns, churches and research stations create spaces for relating, or seeking refuge,” he says.

He and Infante, a structural engineer, conceived of and built the house themselves, putting in long days to finish the project in just over two years. During that time, they lived in the adjacent barn – unheated and without electricity or running water – testing their mettle along the way. The pair put their stamp on everything from the design and engineering to the foundation, painting and tiling, and everything in between. When you walk into the space, which soars to 34 feet at its highest point, you can feel that personal touch and positive energy. Infante ensured that the home was as energy-efficient as possible, too, using structural insulated panels with an R-value of 39, an air-to-water heat pump that warms and cools the house with extraordinary efficiency, and windows placed to maximize solar gains.

The couple held true to their first instinct for the house. “For me, it’s vitally important not to lose that first impulse,” says Nuttall, who approaches his landscape projects with the same visceral response. The only thing that changed was how the home is sited on the lot. Skewed at a purposeful 11-degree angle from the road, the plan accomplishes three things: privacy (no windows line up with neighbours’); efficient and beautiful use of natural light; and aligning the long axis of the home with the area’s rolling hills. “I used to say to my students, ‘Good design solves multiple challenges simultaneously,’” says Nuttall.

Outside, the natural environment is given the same attention to detail with an emphasis on native plants and a local ecology, one that integrates into the unique ecosystem it’s in, Carolinian Canada. “We have nucleating Carolinian forest patches and habitat resources, such as a snake hibernaculum, a vernal pool fed by water from the house-foundation weeping tiles, bird boxes that supply habitat for cavity nesting birds, and no-mow zones,” he says.

For Nuttall and Infante, who were looking to escape the city, the process of building their own home-away-from-home has been joyful and transformative – taking away the stressors of everyday life with Mother Nature at their doorstep. The large back windows, in fact, allow nature to play out as theatre viewed from the comfort of the living room. “The building is working hardest when it’s quiet and near-empty,” says Nuttall. “What is the relationship between architectural space and moments like that?” DANDOESDESIGN.COM

See also:
A Collection of Modern Farmhouses in Ontario