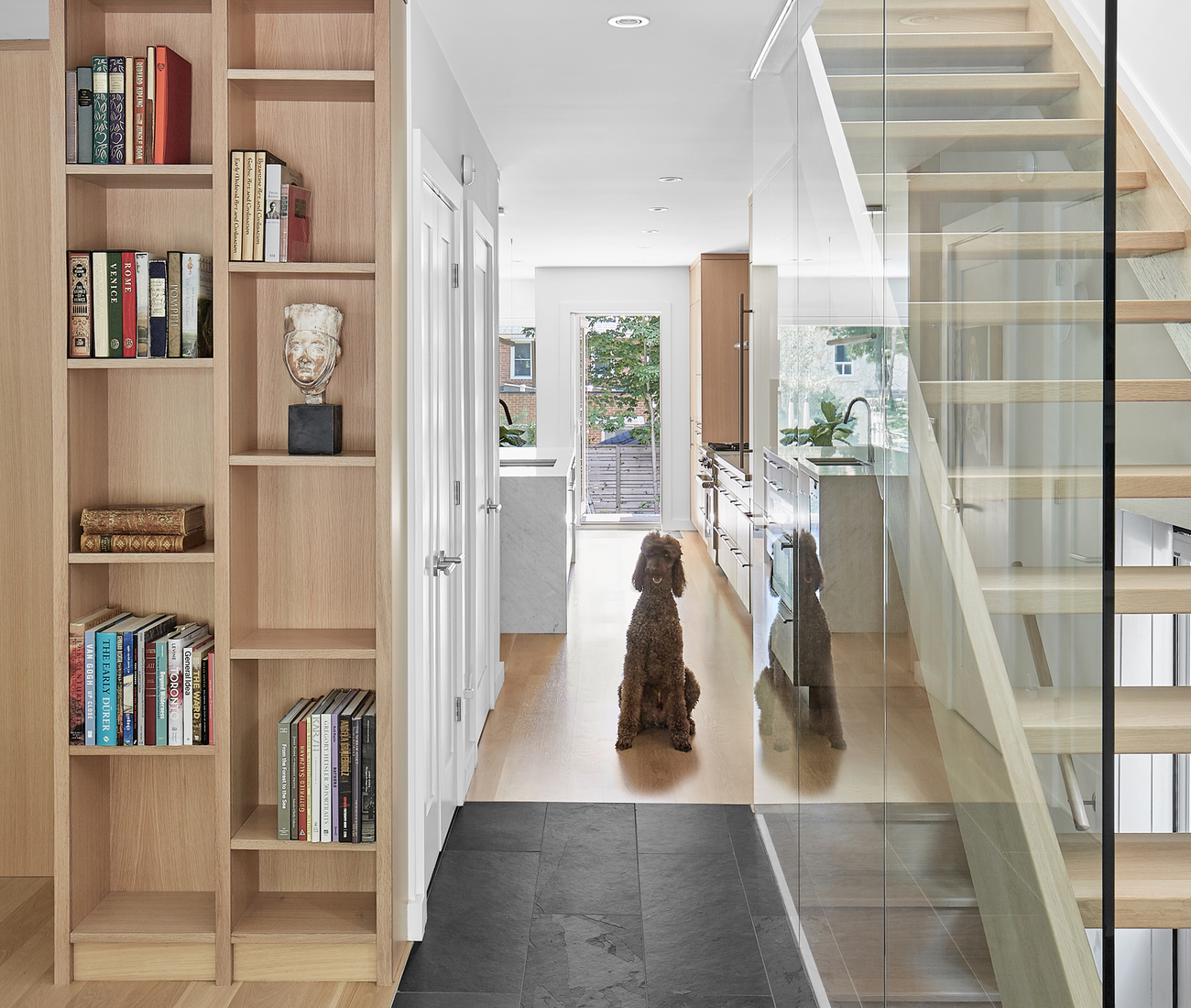 Instead of downsizing, an empty-nest couple tasked Asquith Architects with reimagining a North Toronto home for their next life phase

House of Louis, a recent North Toronto renovation by local firm Asquith Architects, isn’t named for its owner. It isn’t named after their kids, either. Rather, it’s a reference to a stately standard poodle who features prominently in the project’s architectural photographs. But more on that in a sec.

Louis’ starring role in the architectural photos isn’t simply a whimsical touch (though more project photos should include pups along with blurry passersby, if you ask us). Rather, House of Louis is a renovation for an empty-nest couple – the kids have launched, but the family pet remains. And as the duo readied for their next life phase, they required a house that matched their lifestyle. 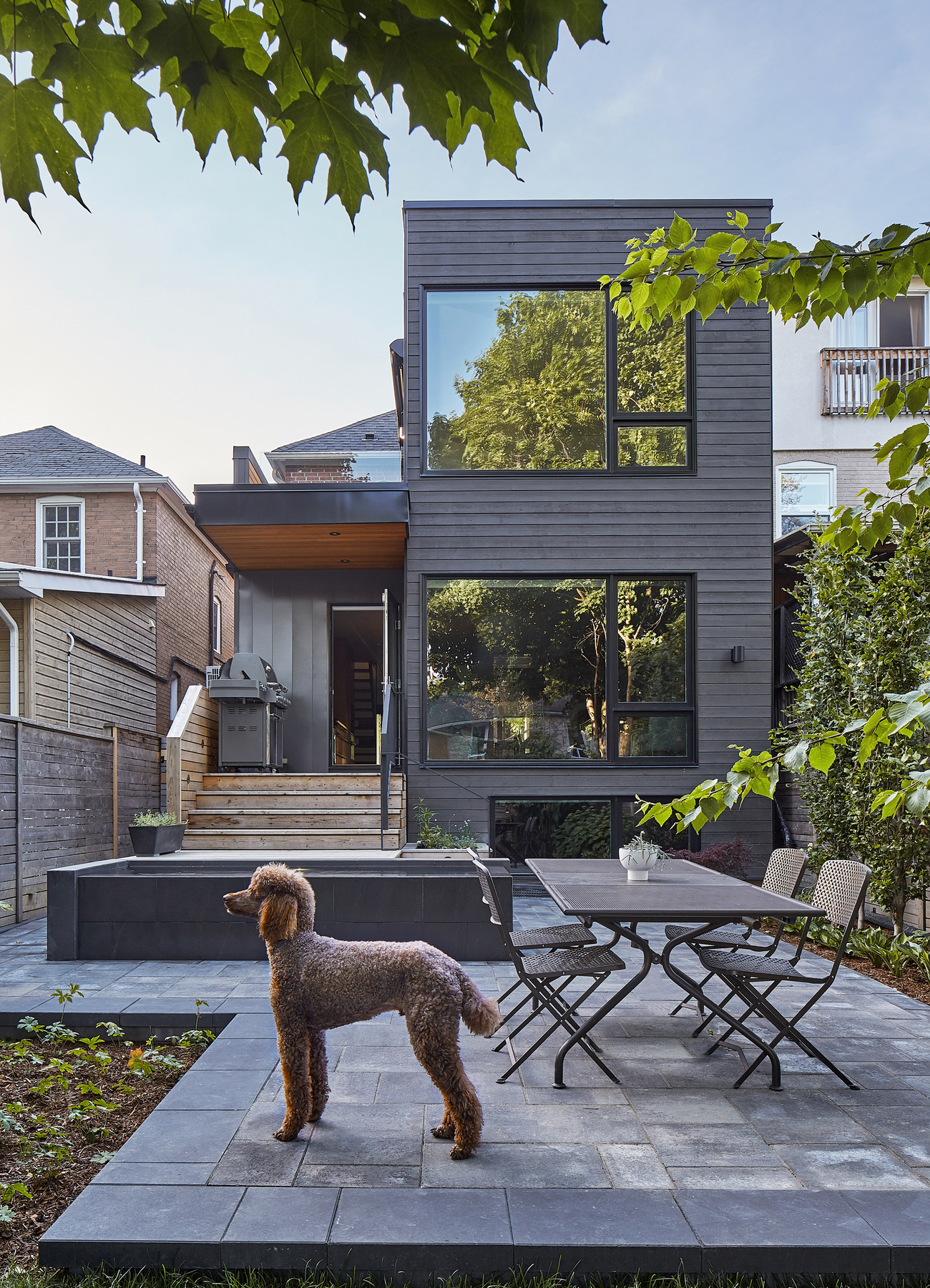 Many empty nesters choose to downsize, but House of Louis’ inhabitants wanted to stay put: along with owning a two-storey Edwardian on a 25-by-100 lot, the couple also felt deep connections to the neighbourhood. Their three adult sons had moved out, so they wanted to spread their wings – and wanted a more open-concept layout than the existing space, divided into smaller principal rooms, afforded. At the same time, they wanted to maintain a “family hub,” a place that would welcome their kids and grandkids.

So it tasked Heather Asquith, Asquith Architects’ founder and namesake, with the job. “I think there is a certain freedom in re-thinking your house after raising a family,” she says.

Asquith responded by adding a two-storey volume to the house’s rear. Stretching across the residence’s width, the addition “cuts in,” creating a sitting window on both floors, offering views of North Toronto’s mature greenery. The cutout “also allowed for a taller, more slender form instead of one that stretches straight across the back,” says Asquith. “It gives the addition more of a lantern-like expression.”

The volume’s shape also creates space for a small deck, which houses a barbecue, before descending onto a landscaped patio. 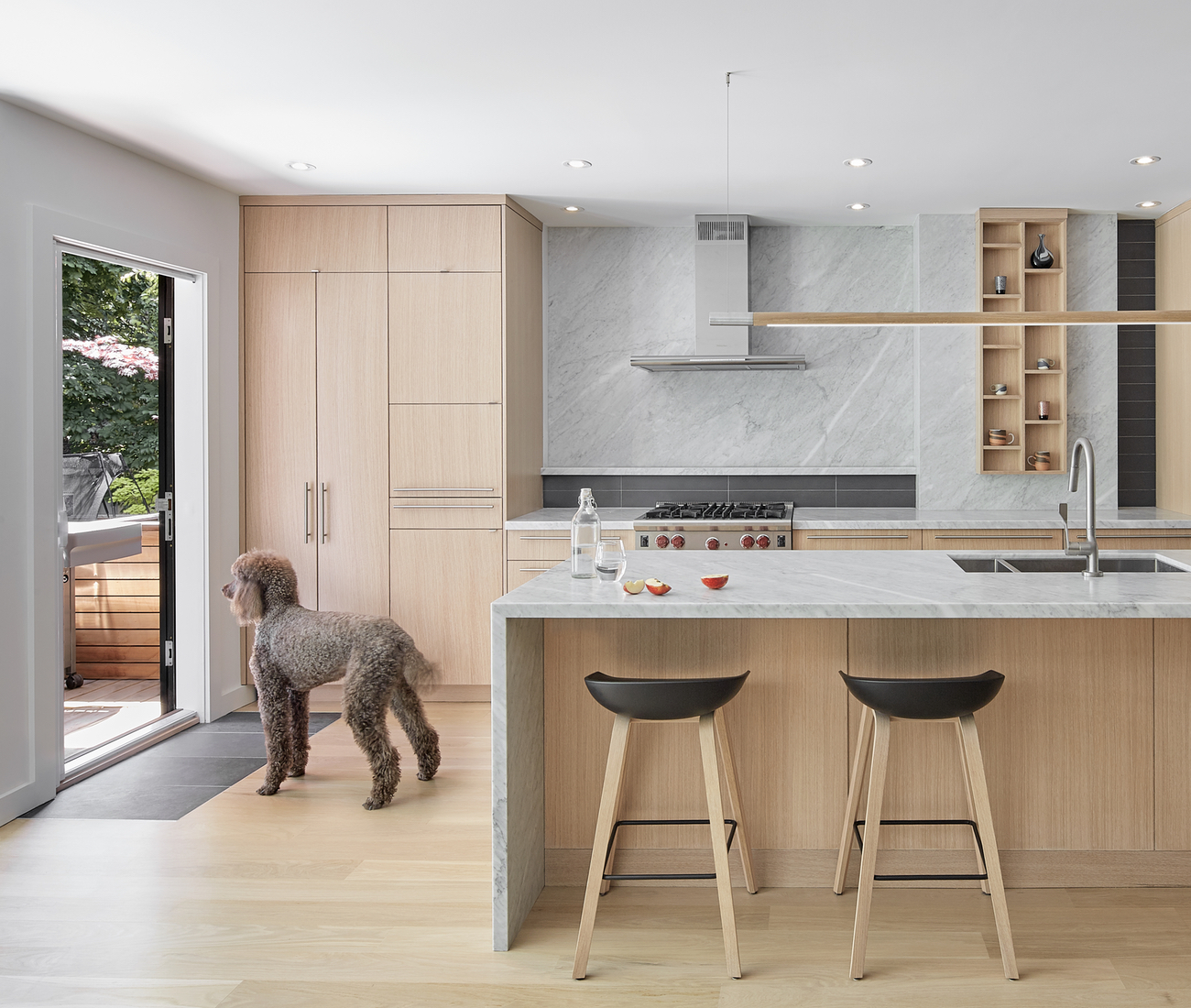 On the ground floor, the contemporary volume allowed Asquith to add an open-concept kitchen / dining area. Here, bright, light and pure is the name of the game: the first thing visitors notice is the Carrara marble, which is showcased on countertops and the kitchen backsplash, and custom-stained white oak flooring. To keep things uncluttered – and to ensure that eyes stay on that gorgeous marble – the Edwards & Wilson cabinetry features concealed shelves for small appliances. 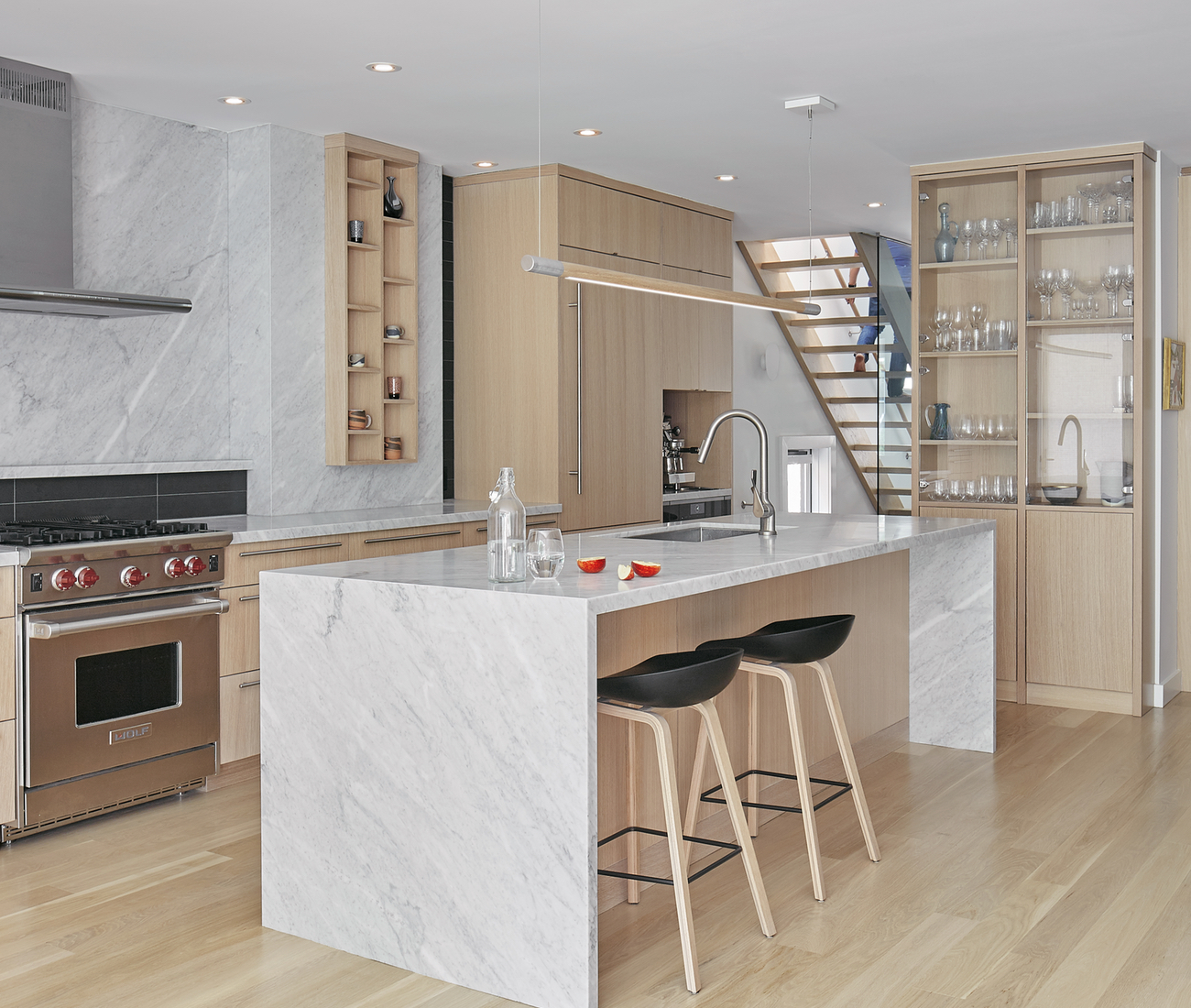 The kitchen / dining area is completed with thoughtful touches, including a concealed Miele fridge, Hollis & Morris‘ Bennington pendant suspended over the island, a dining table set by Kastella, tucked-away stools by Hay and a stunning light fixture by Lambert & Fils. Pipe chases and duct runs are also artfully concealed in a custom cabinet, which incorporates a bookshelf, recessed lighting and adjustable shelving; it also delineates living and dining areas.

“Keeping the design clean was important, and the rear wall was a real exercise in composition, with things like a slate shelf above the counter, and a shallow display cabinet for small bits of small pottery,” says Asquith. “We tried to be careful to keep it minimal but not stark, and maintain points of interest.” 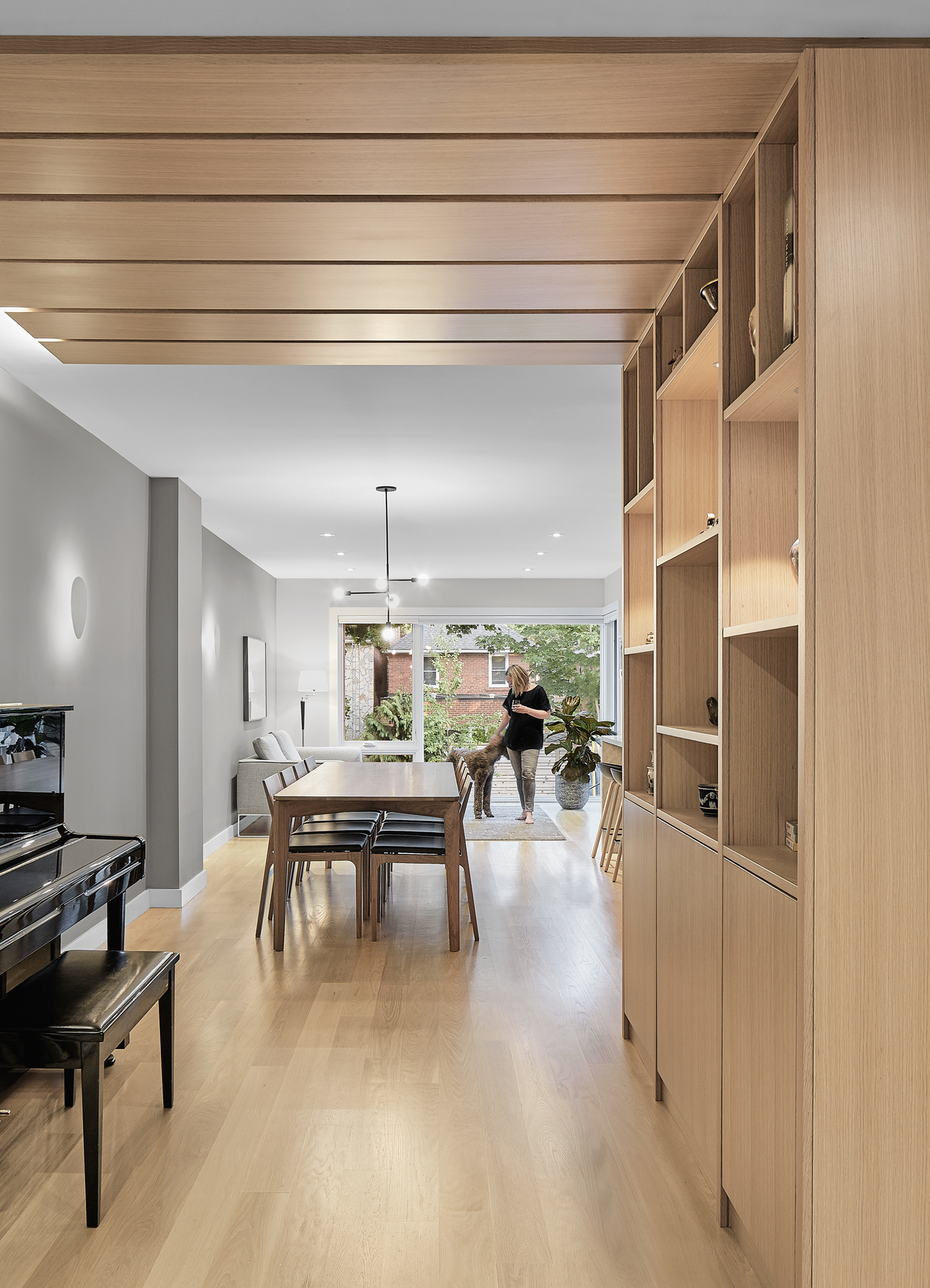 In the living room, Asquith also completely rebuilt the original wood-burning fireplace, which replaced the original brick with concrete panels by Dekko. As the renovation progressed, the architect also elected to replace the existing staircase with open-rise stairs and a glass wall, allowing light from from a second-storey skylight to filter downwards. “The one reminder of the old house,” says Asquith, “was the single stained glass window at the foot of the stair.” 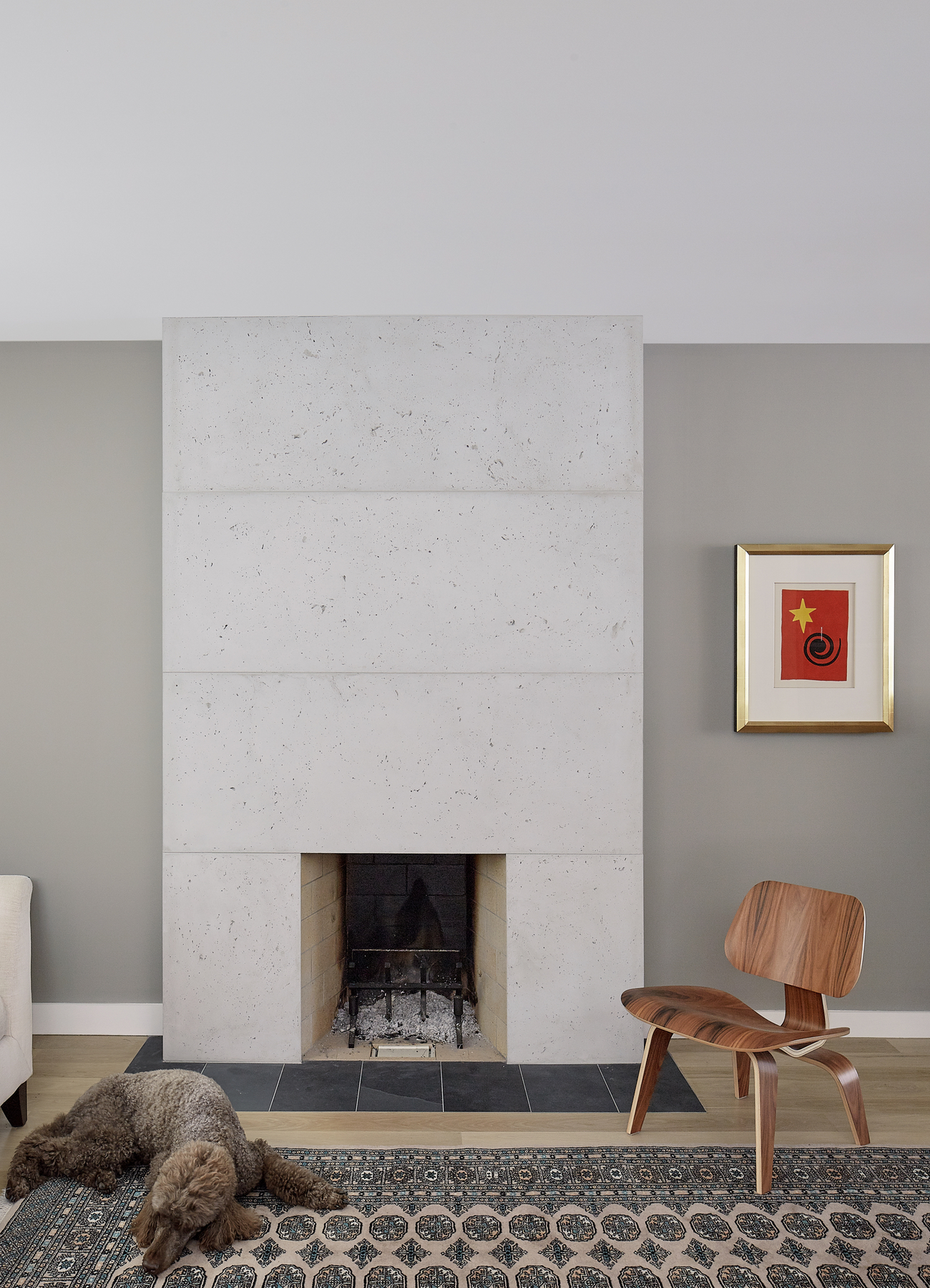 That brings us back to Louis, the adorable grey poodle. Though Louis is undeniably photogenic, Asquith and the project’s photographer, Nanne Springer, didn’t expect him to be a star model. That was a choice all his own. “Louis, the owners’ beloved standard poodle, is always around,” says Asquith. “He was very interested in the photo shoot, hence his frequent presence in the photographs. It was actually Nanne who named the photo shoot ‘House of Louis’ as a joke,” she says.”Anyway, we were very happy to include him in the shoot, and to be honest, it would have been difficult not to!”

And while Asquith didn’t design any pup-centric features into the renovation, she says that Louis loves lounging in the south-facing master bedroom window. It makes sense: it offers a birds-eye view of the surrounding canopy and the squirrels within. Get ’em, Louis. asquitharchitect.com 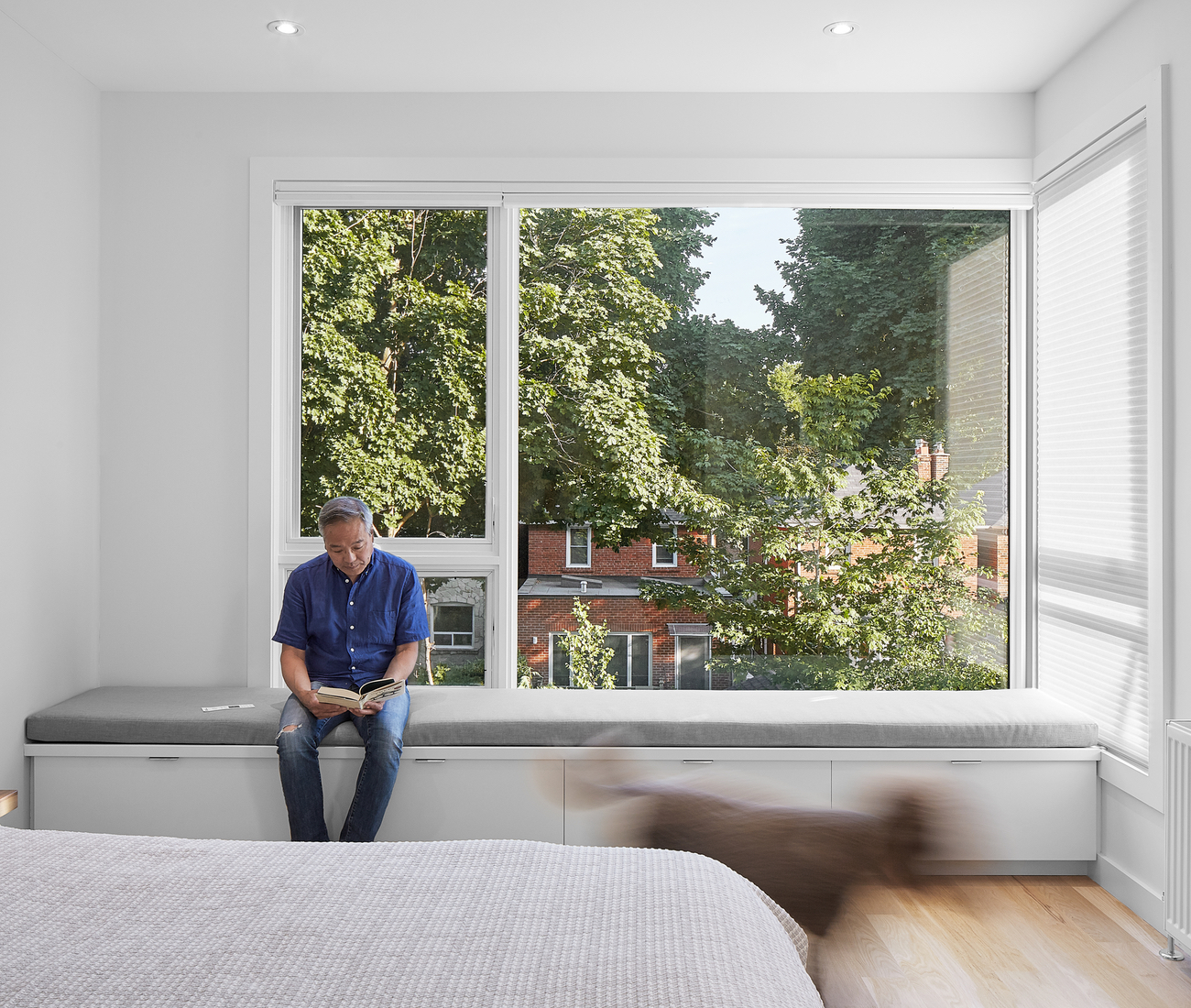