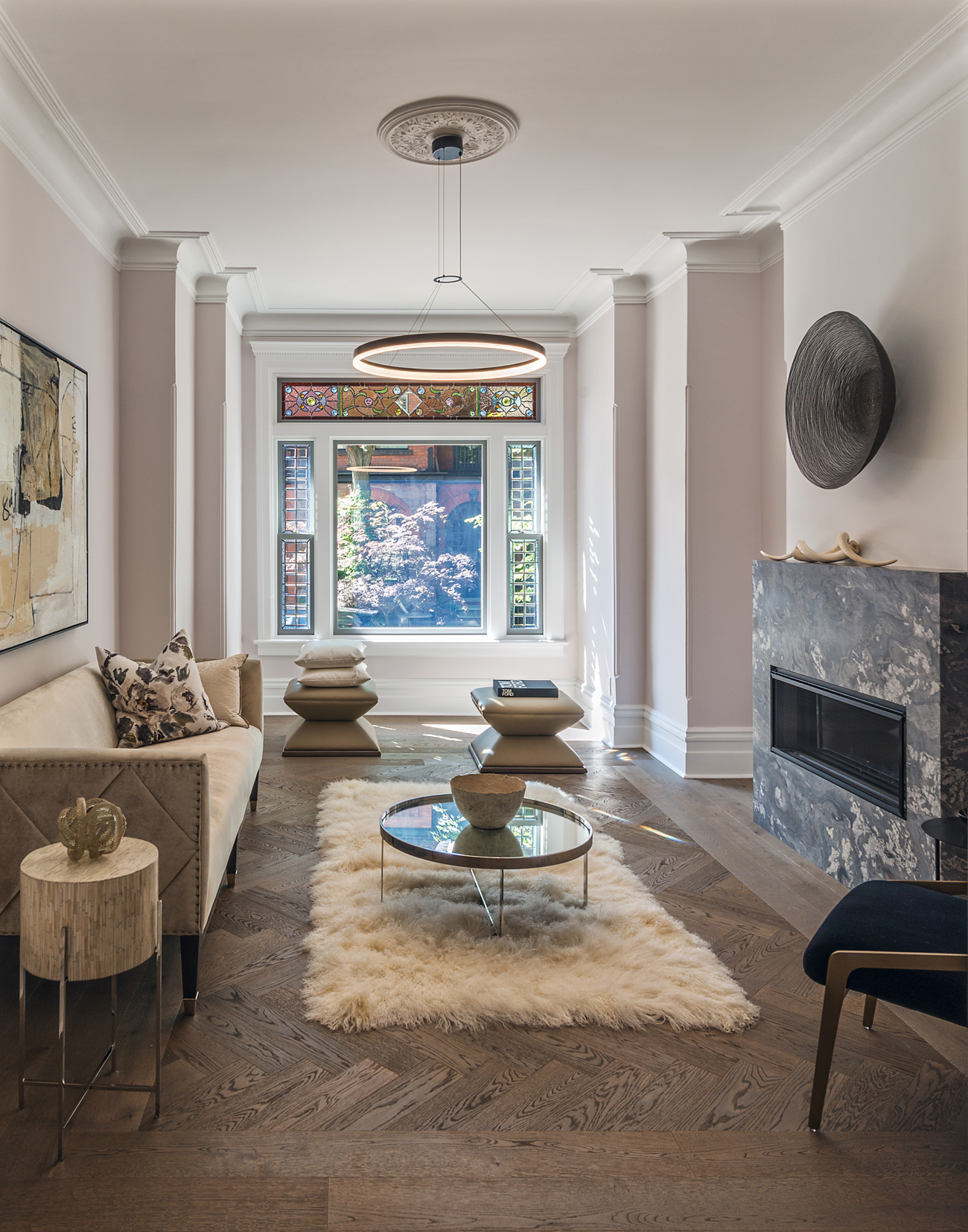 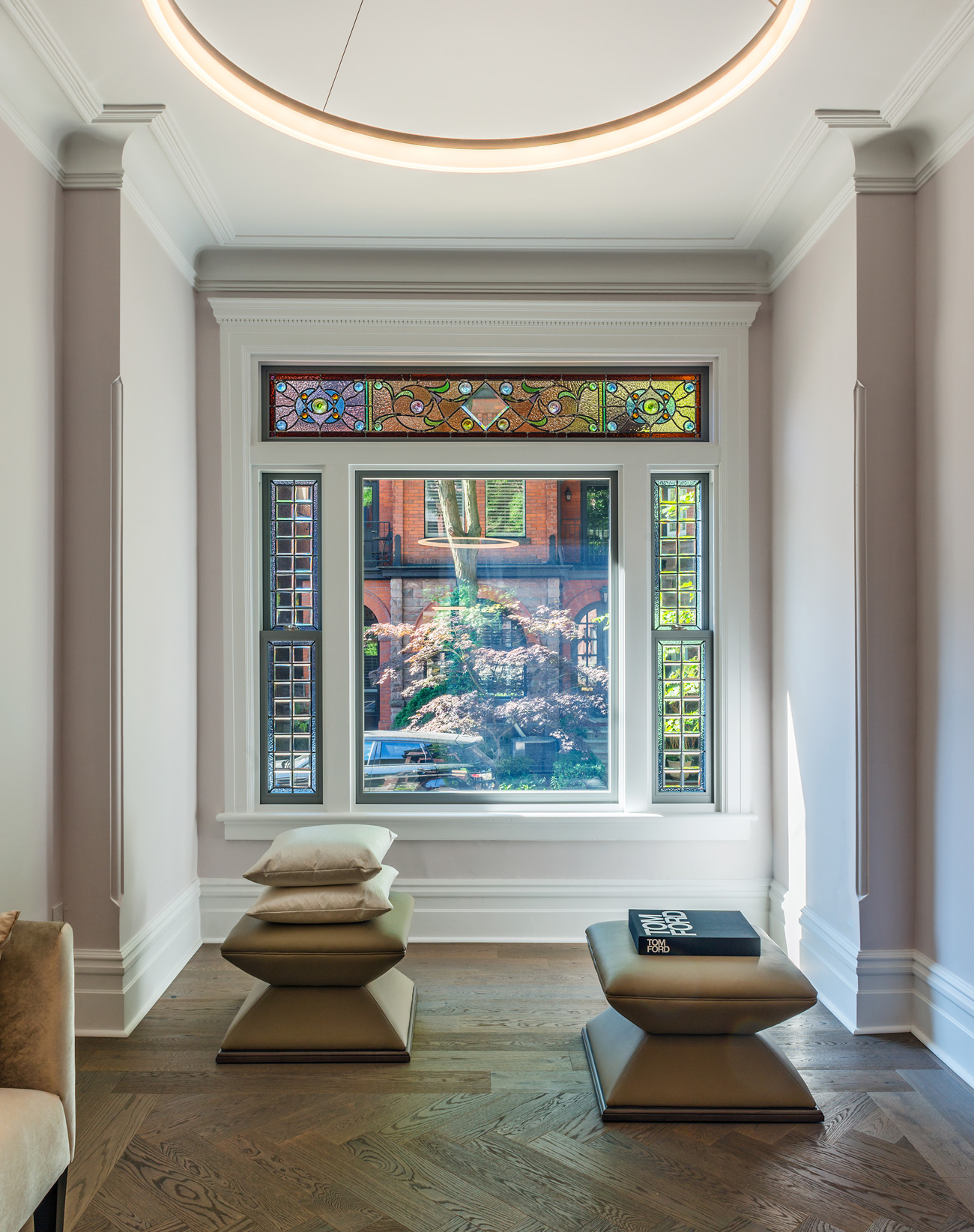 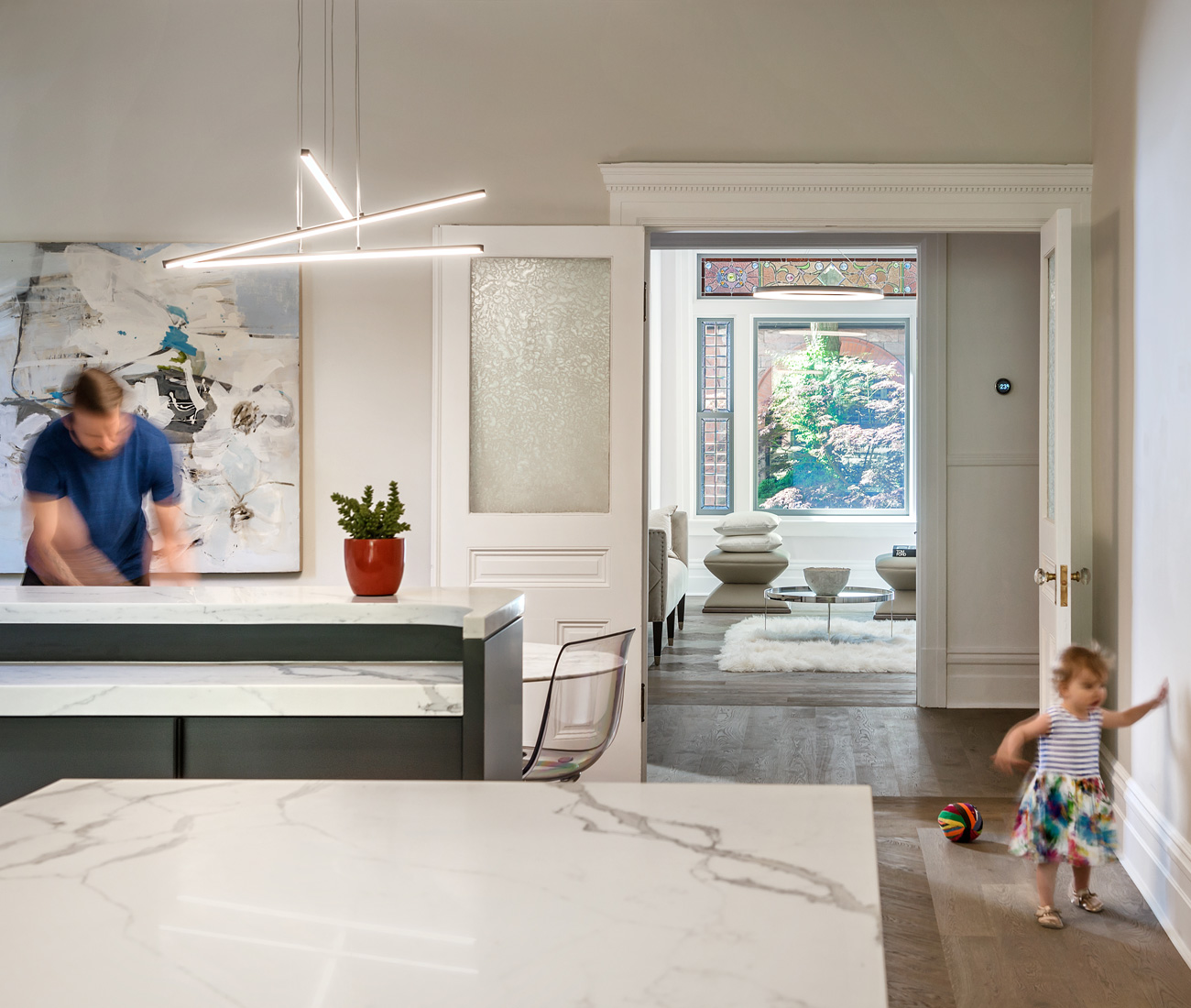 Book-matched quartzite on the island and backsplash lends the contemporary kitchen timeless appeal. Light from Sescolite; art by Rachel Ovadia. 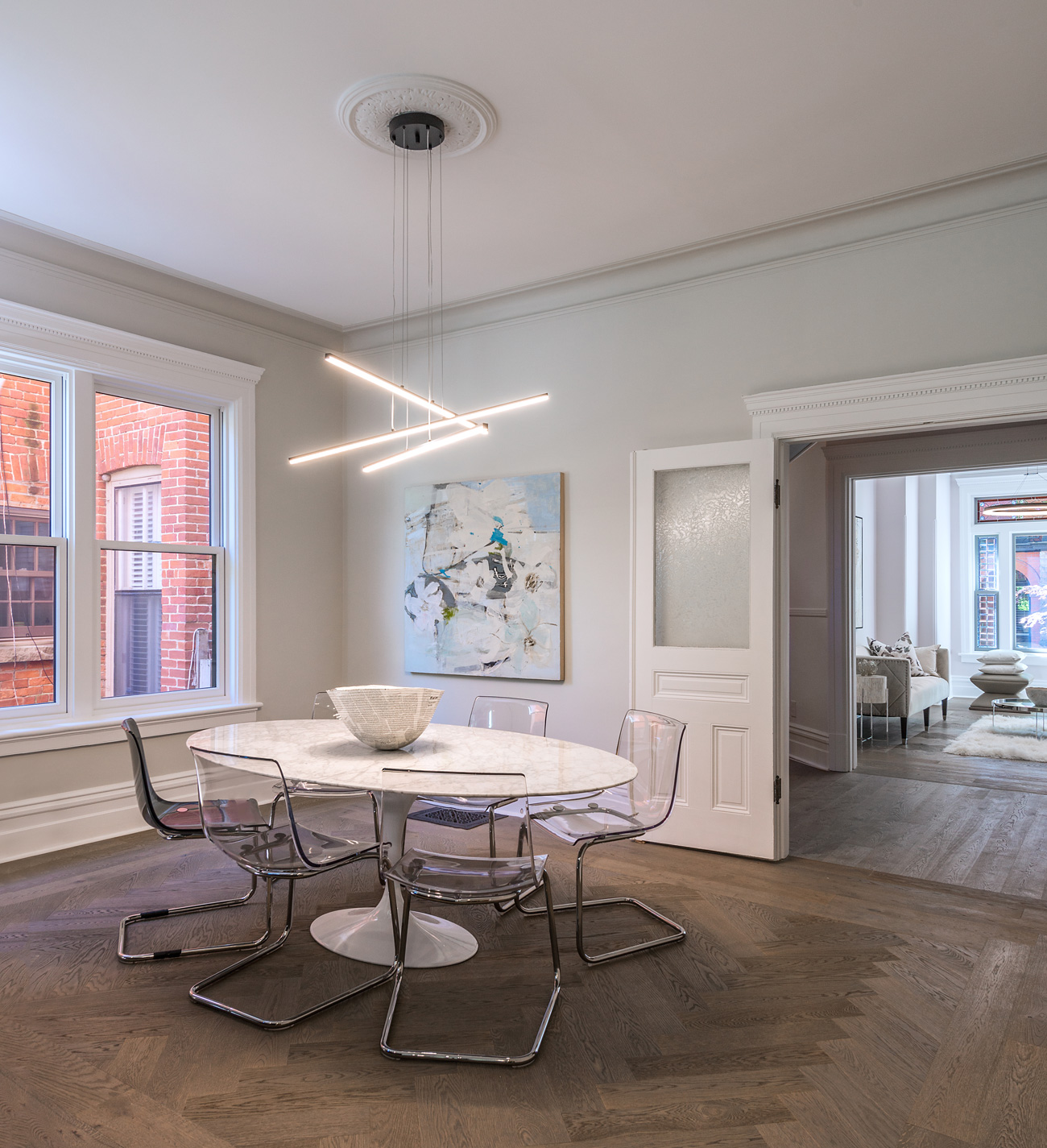 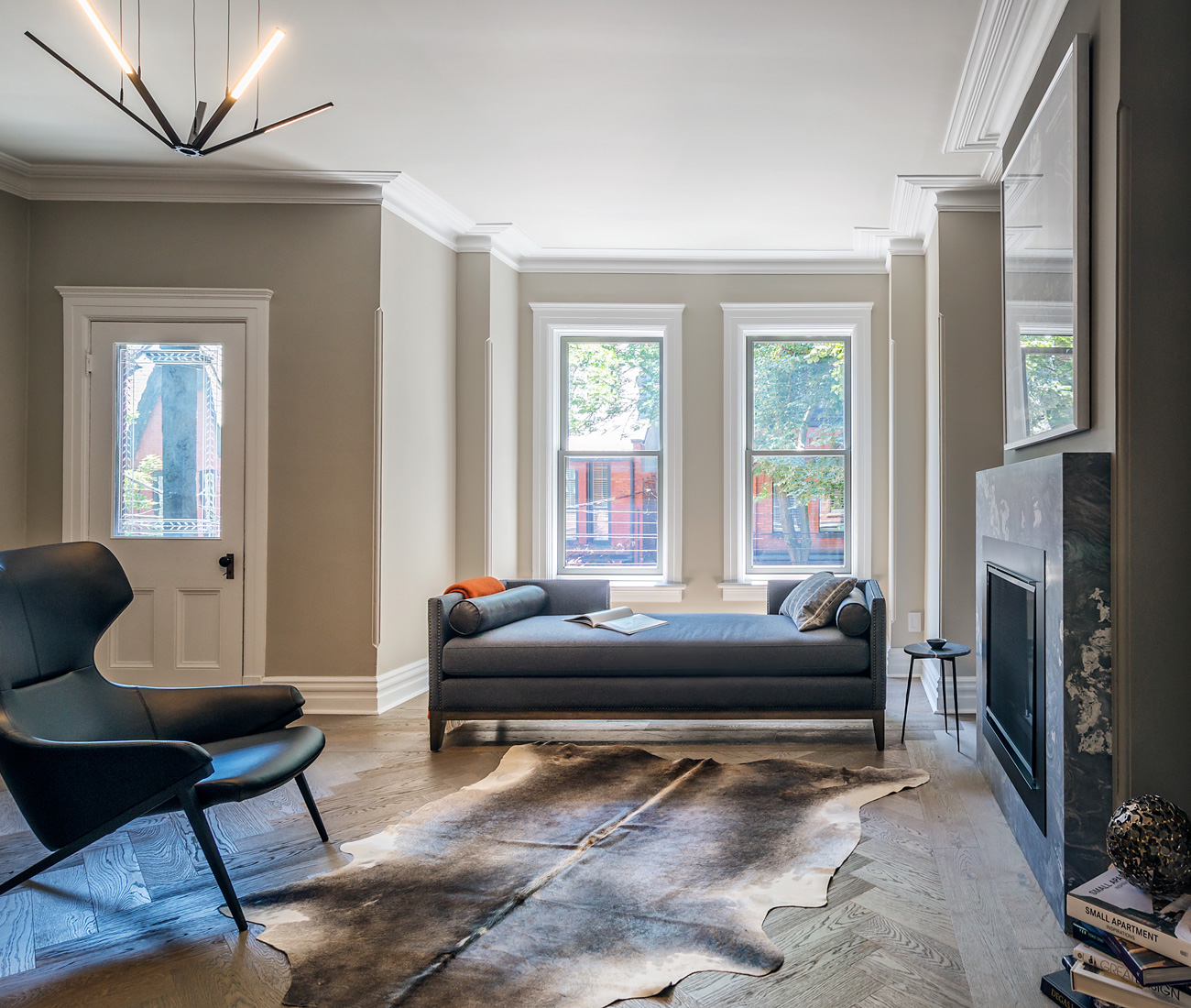 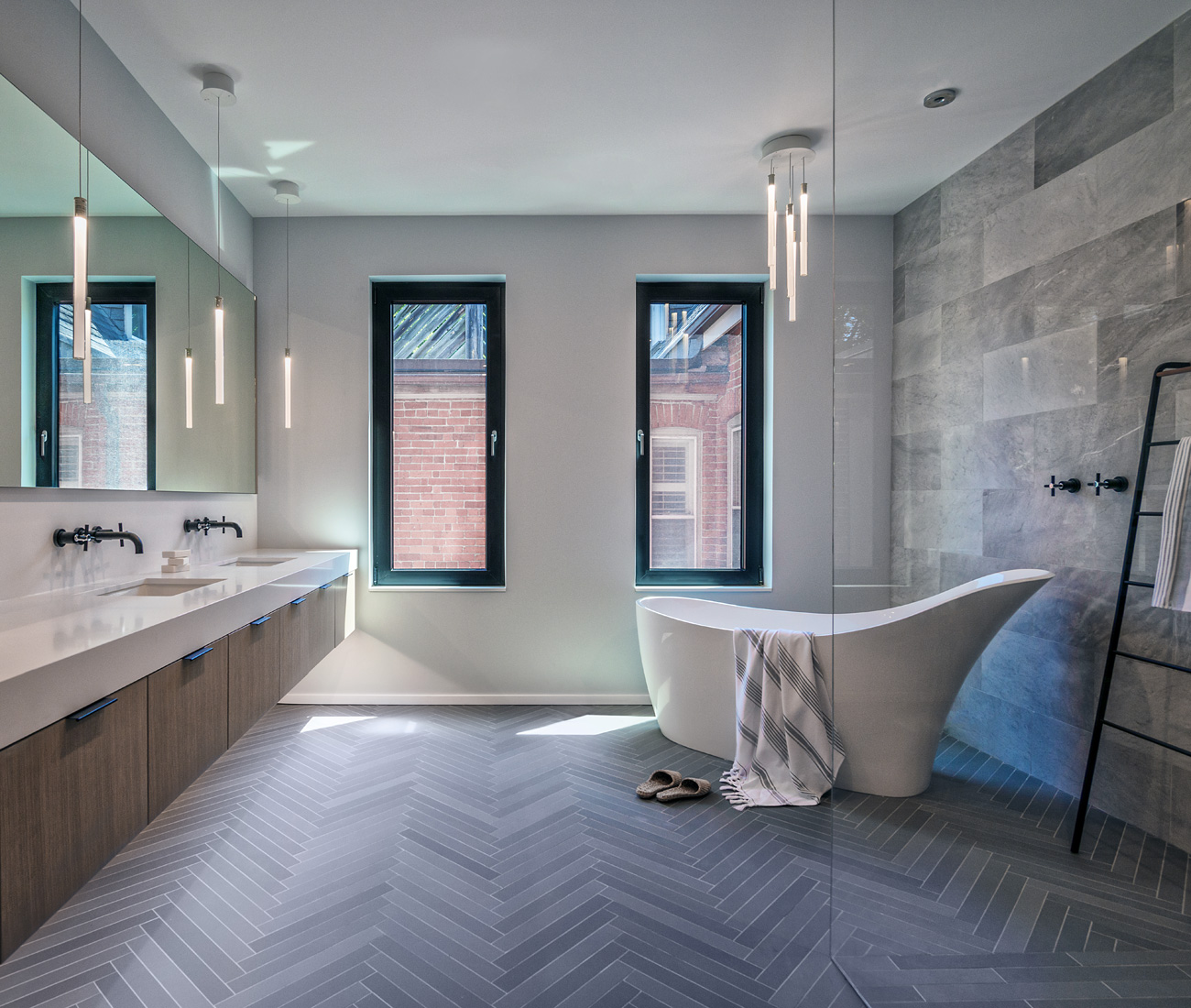 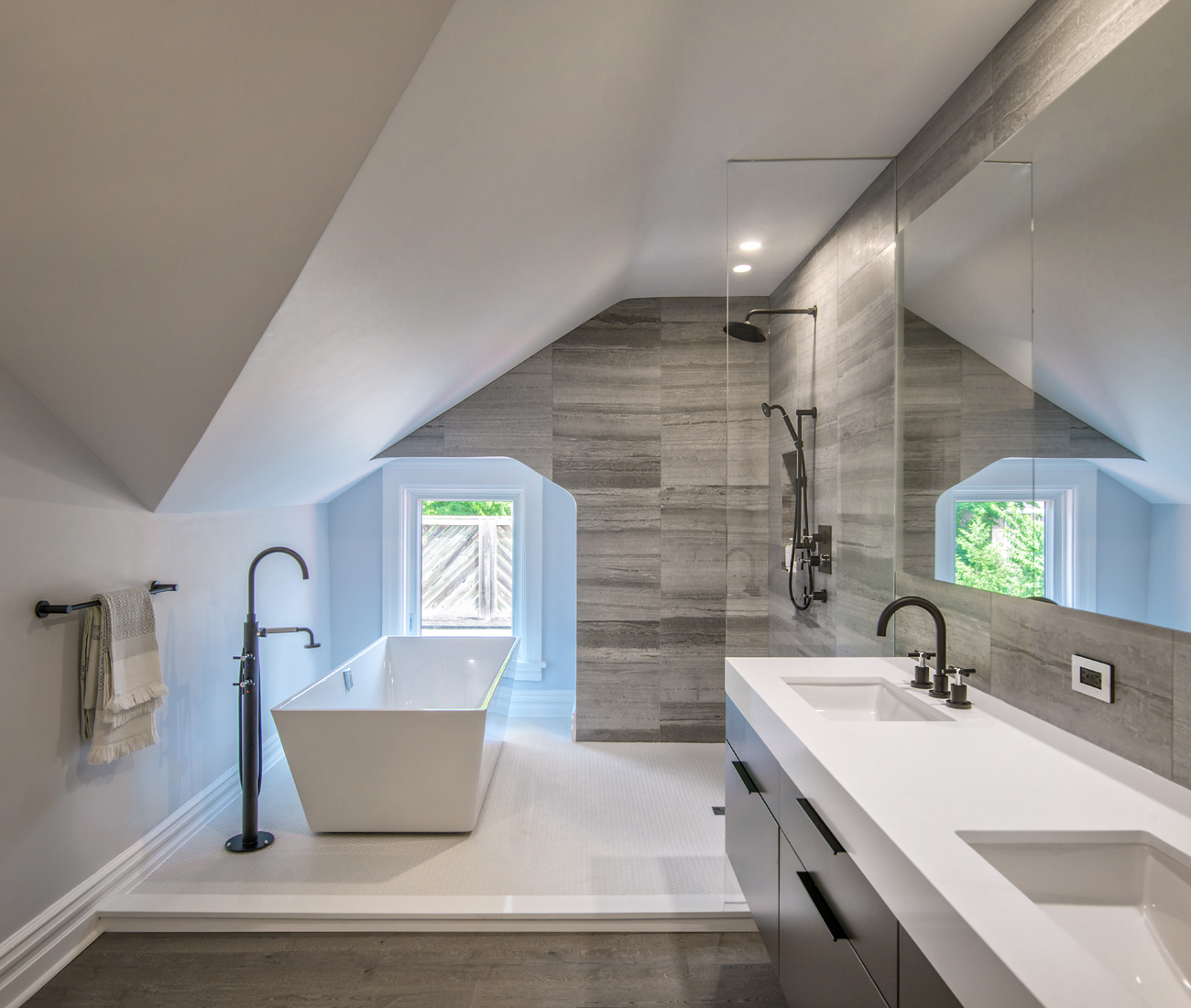 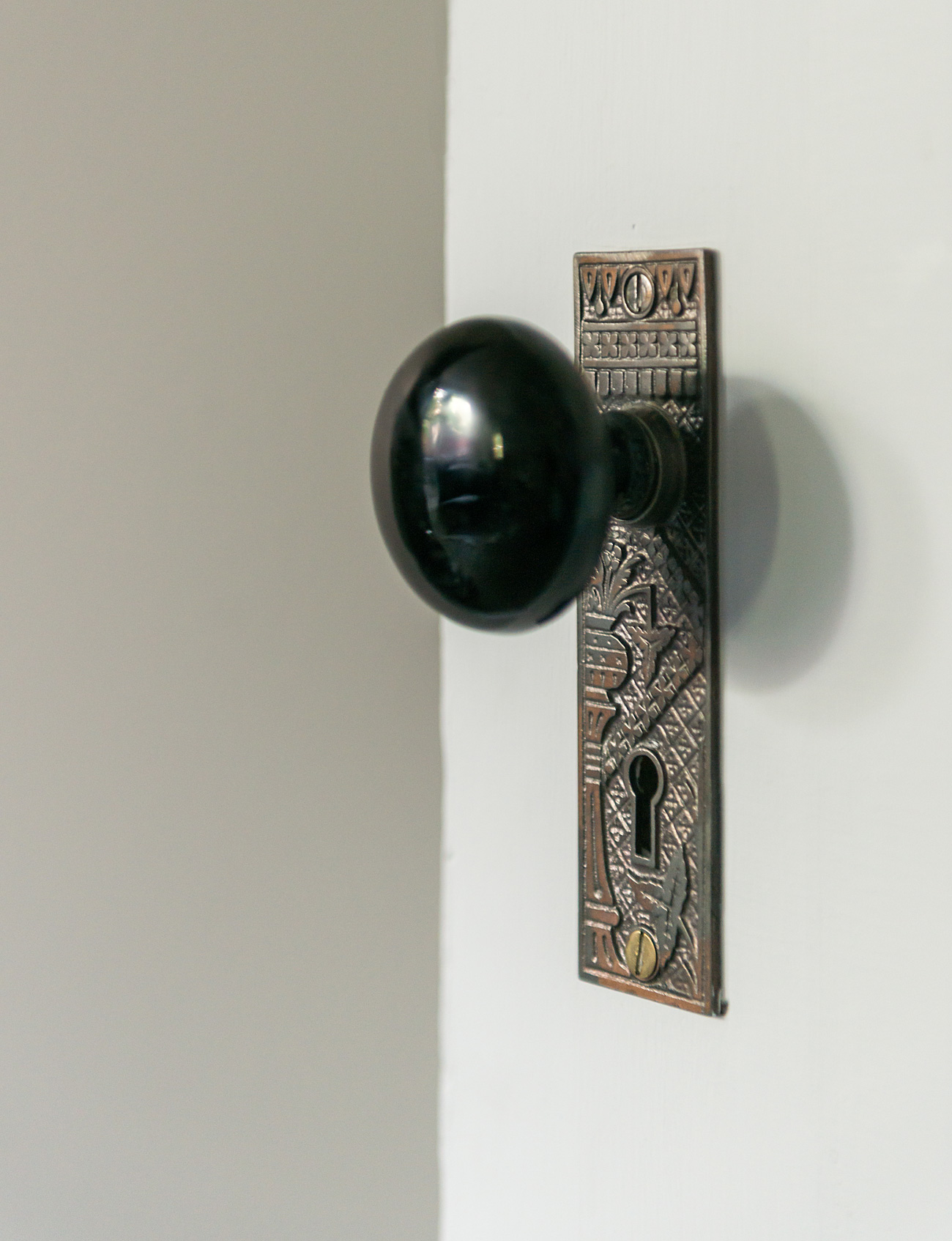 Tranby Avenue’s heritage-designated houses are jewels of late Victorian architecture. Hand-painted birds adorn the stained-glass transom windows – a gift from the home-builder – above many front doors. These sorts of beloved historic elements are why, in 2015, the appearance of a renovation permit in the window of an 1892 beauty raised eyebrows. A developer, 3Gen, was flipping the property.

The inclusion of Betsy Williamson quelled any concerns neighbours may have had. Co-founder of Williamson Williamson Inc. (formerly Williamson Chong Architects), the Harvard educated architect whose work has been recognized with the Professional Prix de Rome from the Canada Council is known for her finesse with fine detailing, careful use of materials and professional integrity. In 3Gen’s Darcy Ward and Alexis Walker, she found like-minded collaborators. “Darcy and Alexis didn’t approach the project like typical developers,” notes Williamson. “From the beginning, they treated the home as though it were their own.” The team devotedly restored the original form and function where possible and inserted updates where necessary.

Stepping into the foyer is like a quick study in Victorian detailing: delicate mouldings accentuate the walls, handsome baseboards stretch up from the floor and, of course, the street’s signature tweeters are nestled above the door – in leaded glass expertly restored by the great-great-grandson of the window’s original artisan.

Beyond the entry, the juxtaposition of the historic and the contemporary becomes more pronounced. “Our office only does contemporary and modern work,” says Williamson.  “So what interested us was showing exactly what was original and what was new, as opposed to making something faux-historic.” The strategy was simple: rooms that were in good condition were preserved, with such details as art nouveau doorknobs and hinges left intact. Areas that had been chopped up by previous renos – the kitchen, bathrooms and master bedroom – were made proudly new. 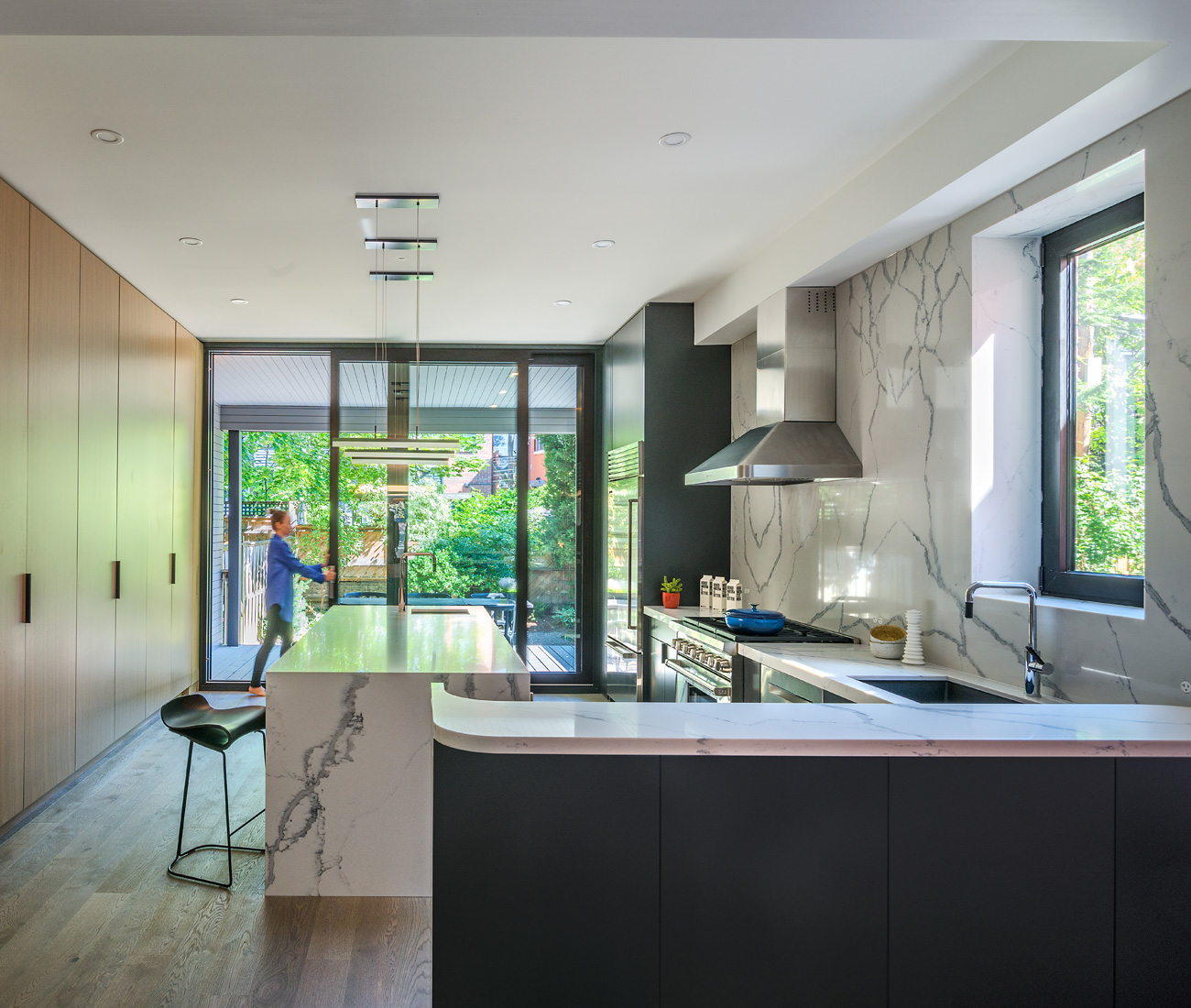 Some unique changes capture the contrast perfectly: a former servants’ passage linking the dining room and the kitchen was no longer needed, so was closed in with sleek white-oak millwork that slips behind the original mouldings. It contains a powder room, a bank of floor-to-ceiling storage cupboards and steps to the basement. The cabinetry is a signature move for Williamson, who loves working with minimally detailed feature pieces.

The rest of the kitchen was a total gut. It’s now clean-lined and bright, with swaths of quartzite wrapping the counters and breakfast bar.

The upstairs is even more radically reconfigured. In the master bedroom, the bed now sits in an open-concept alcove. A wall was removed to make the space feel as large as possible, with more signature millwork separating it from the marble-clad ensuite. Three giant, sliding panes of glass lead to a leafy, private oasis that replaces a former addition.

The glassy back contrasts the home’s fastidiously preserved front. The result is not at all a jarring contrast. Rather, the mash-up bridges the best of both worlds. “We took the home back to what it was meant to be,” says Williamson. That is: beautiful, functional and built to last for many more generations of passersby to flock to.