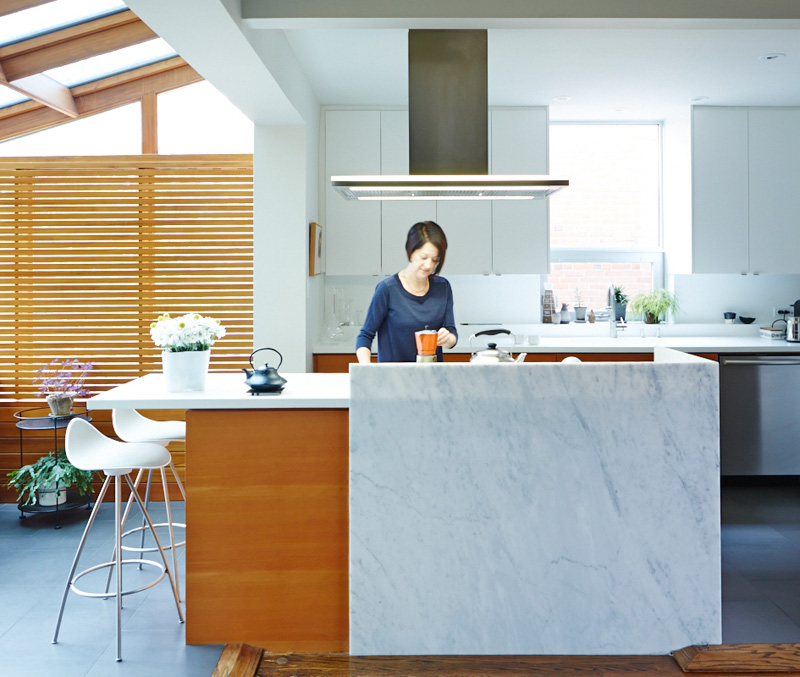 The original solarium, kitchen and dining area were replaced with an open-concept layout. 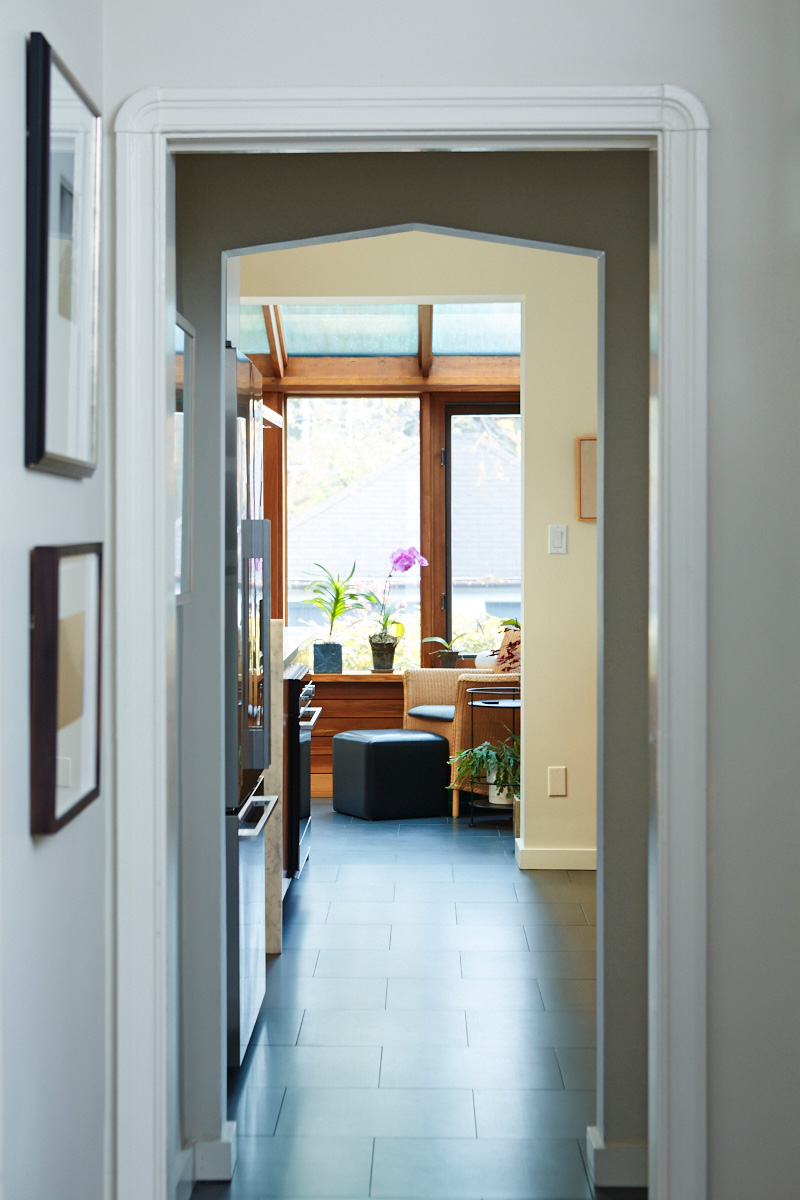 Porcelain flooring from Stone Tile leads from the front door, through the kitchen and to the solarium. The original ogee moulding adds a graphic touch and frames views. 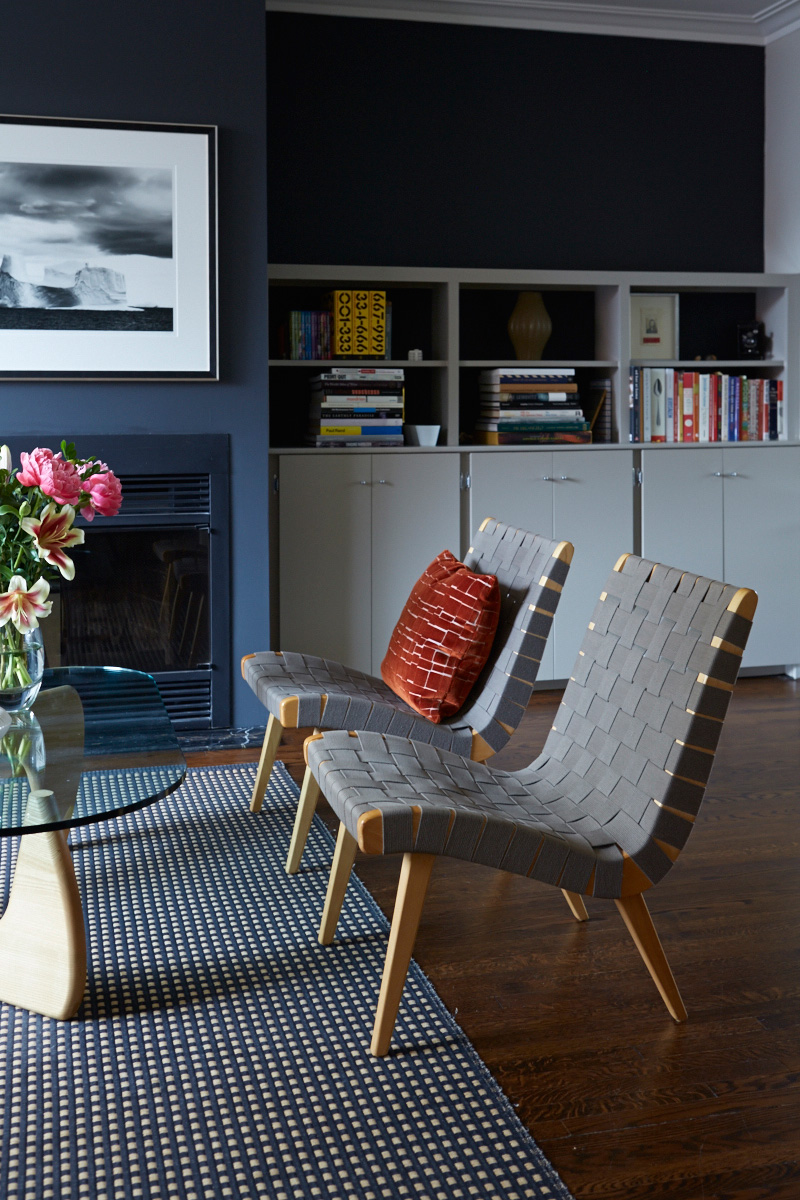 The front room’s fireplace is surrounded by built-in cabinets, which along with the hardwood flooring are original. Noguchi table and Knoll Risom chairs available at DWR; rug from Klaus. 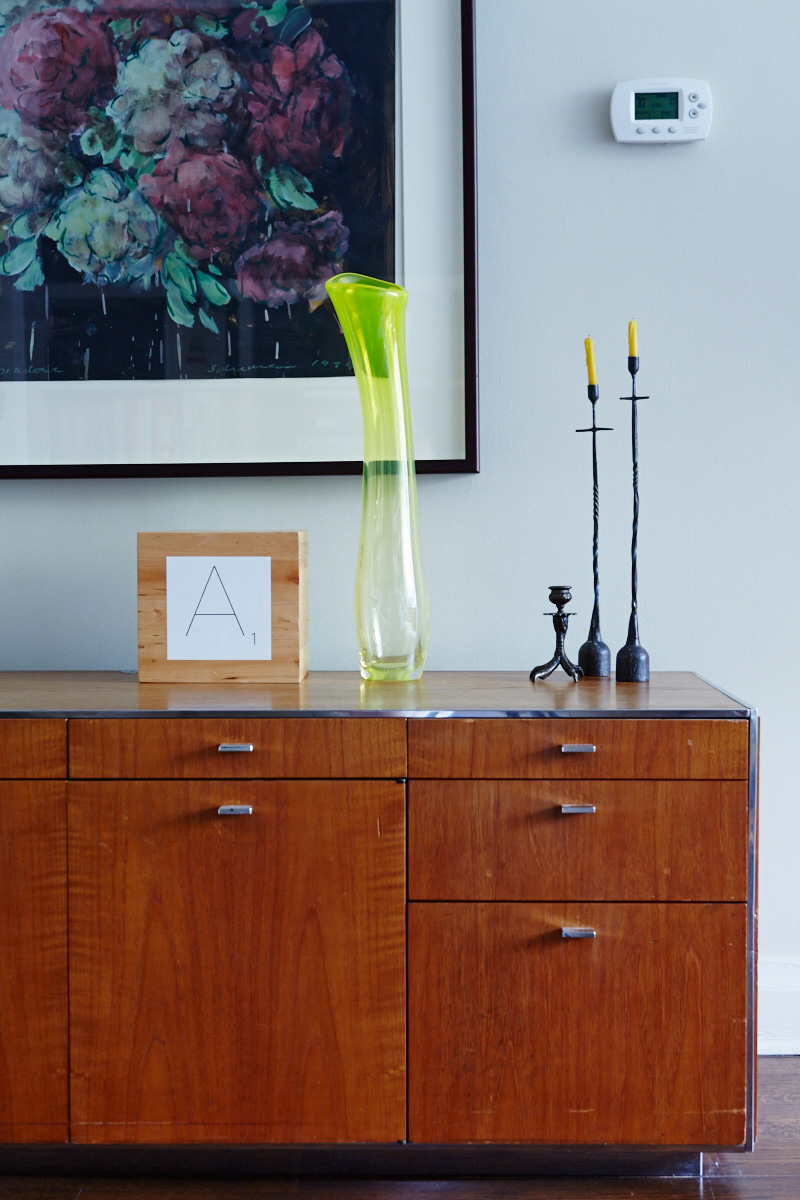 Neat arrangements of art and objets accentuate the home. A ’70s credenza is topped with a vase by Jeff Goodman and iron candlesticks from Hollace Cluny. Painting by Tony Sherman. 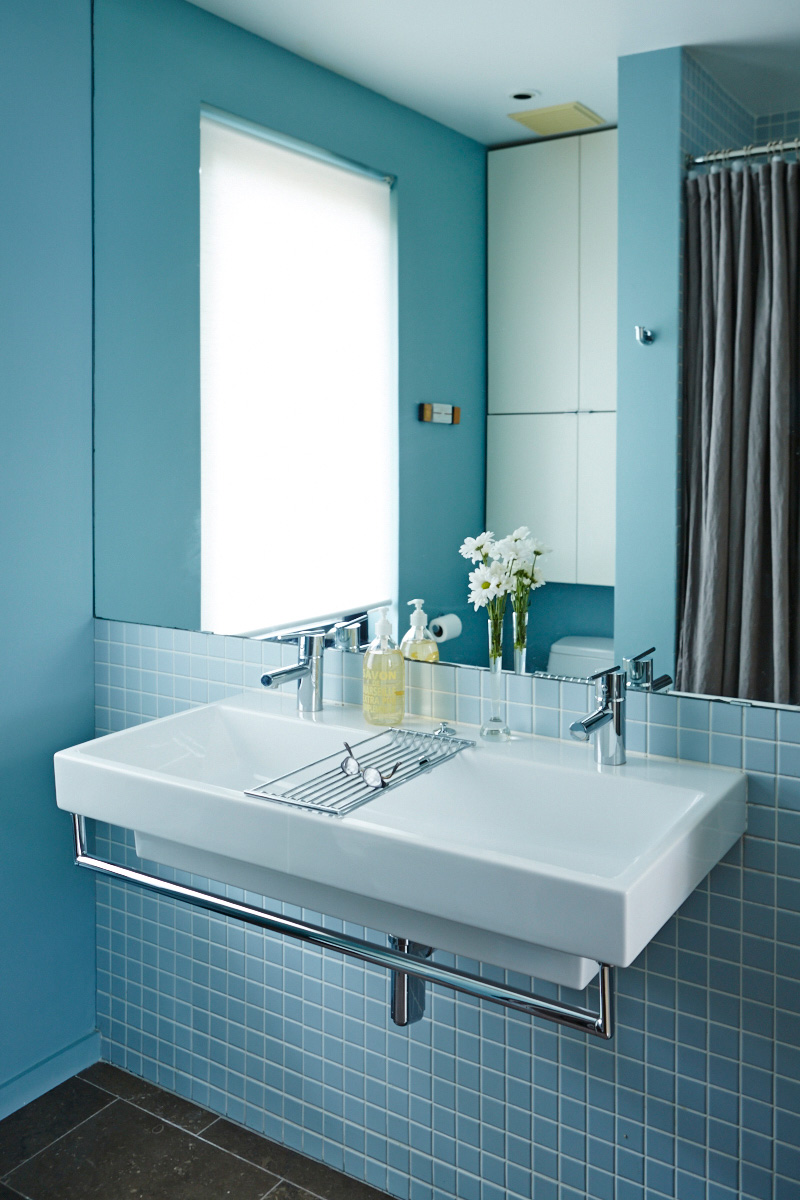 Architect/designer Andrew Jones updated the bathroom with powder-blue tiles and limestone flooring. The mirror opens at both sides, revealing his and her shelving. 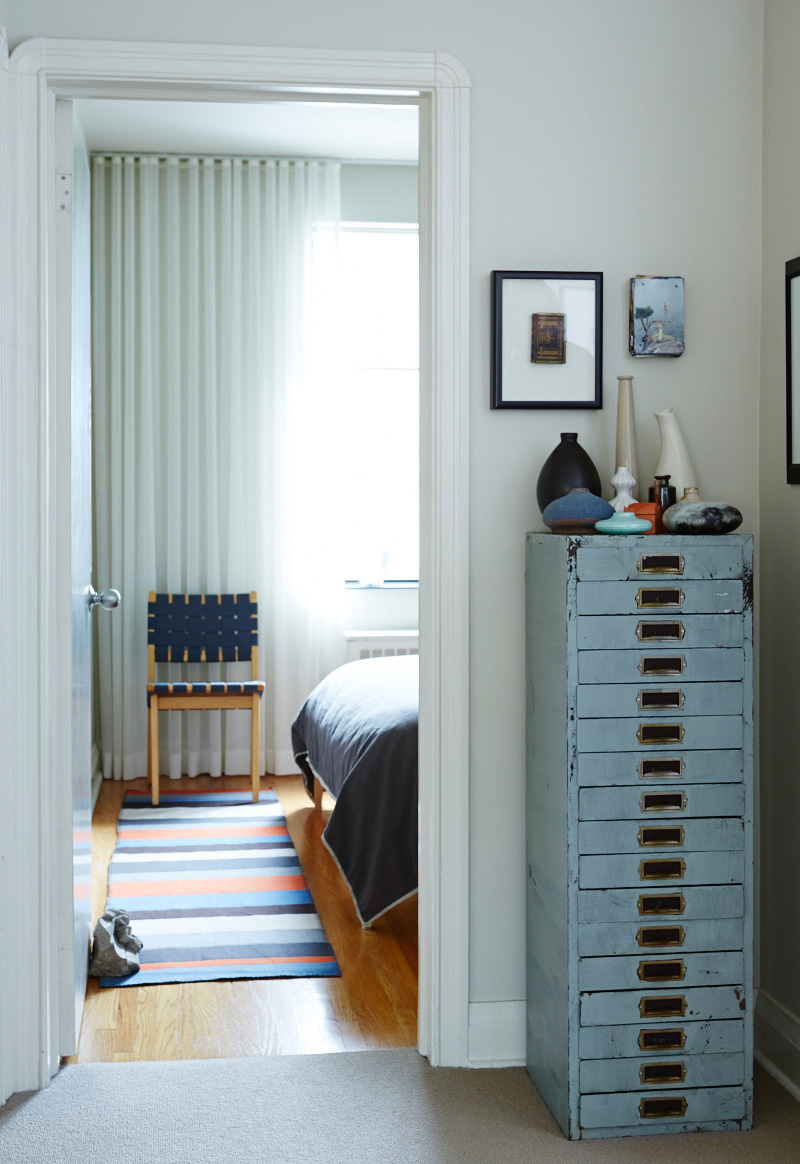 A vintage watch-maker’s filing cabinet is topped with a medley of vases; an heirloom, shadow-boxed Bible hangs on the wall. Runner by Bev Hisey. 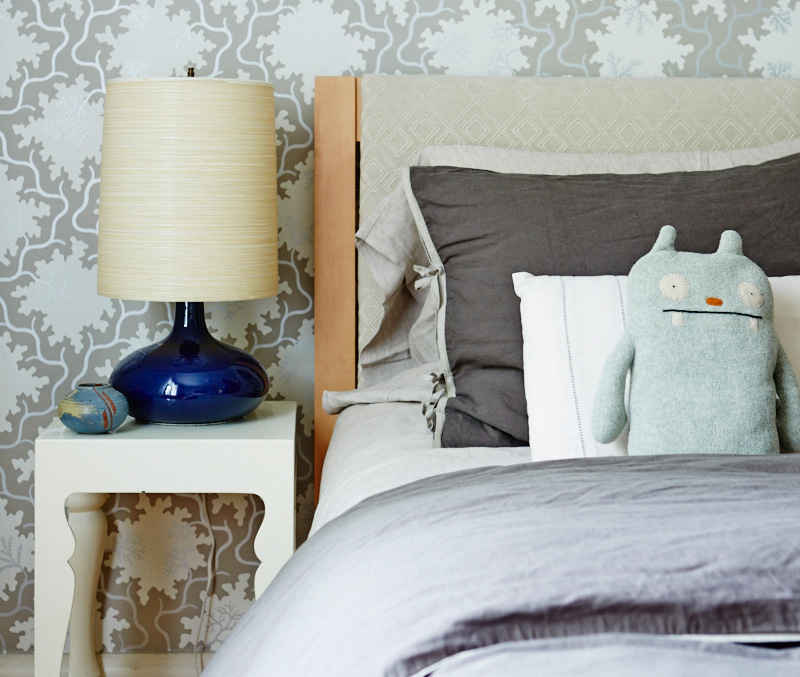 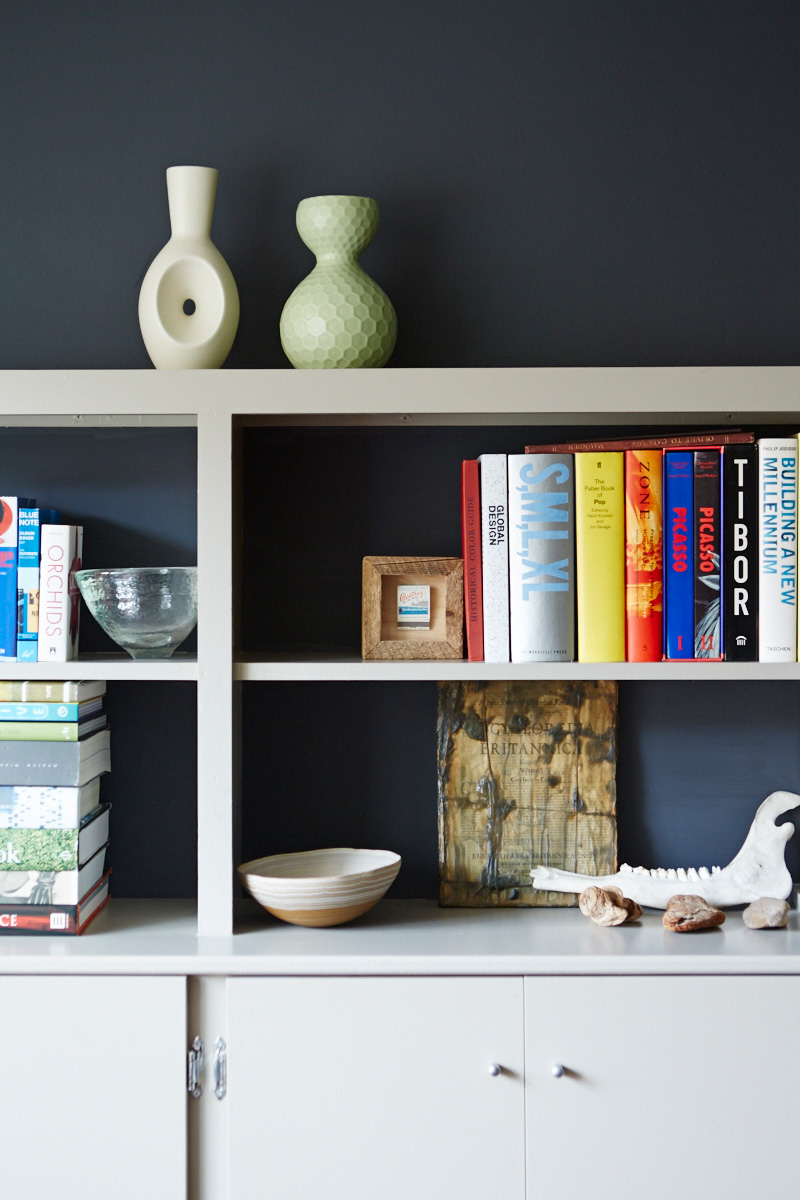 A beautiful blend of creative directors and a 1940s home

When they married in 2002, graphic designers Glenda Rissman and Derwyn Goodall went an unusual route and moved into a 233-square-metre house on Tyrrel Avenue. Rather than ripping the heart out of the 70-year-old structure and rejigging it along modernist lines, they kept it more or less intact; highlighted a few period elements; and turned it into a showcase for their passions and interests – gardening, entertaining, music and art. 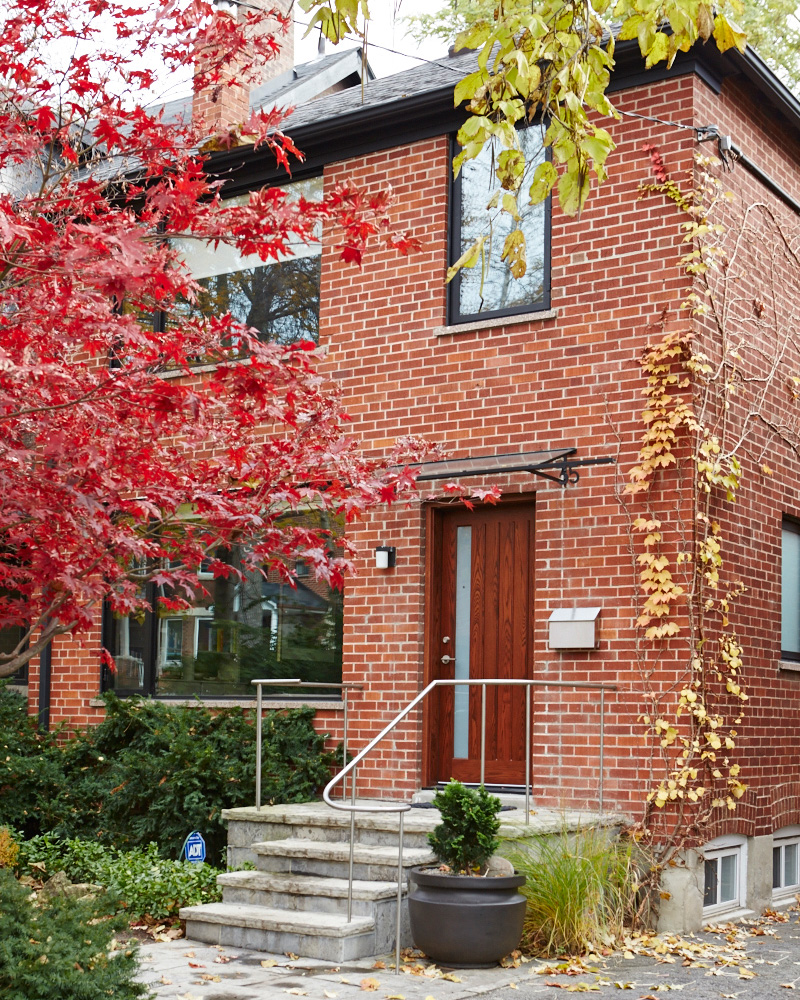 Situated on a 12-by-40-metre lot in the Hillcrest area, directly below Wychwood Barns, the house boasts a long lineage. One of several brick homes an apple farmer built for each of his children in the ’40s (the original farmhouse is three doors down), its boxy configuration features liveable if not large rooms, warm hardwood floors and a handful of details that lend it a quirky charm.

On the preservation front, the couple chose to retain the original staircase and scalloped detailing. They painted the archway between the living and dining rooms white, a colour that pops against the slate grey walls and perfectly frames views of each room. This effect is repeated and heightened on both floors by original art deco ogee mouldings around doorways.

The pair discreetly upgraded the many small, energy-inefficient paned windows with brick-to-brick plate glass, which admits more light and provides unimpeded sightlines to the lush, landscaped gardens at the front and rear of the house. They removed the confining dining room wall and rebuilt the kitchen in birch veneer, marble and white Corian. And they turned the stove-and-prep counter into a joint island/breakfast bar, adding a pocket door to mask what Rissman (admittedly a messy cook) calls the “Tasmanian Devil” detritus. To extend their kitchen and enjoyment of the outdoors, they re-clad the beat-up 20-year-old solarium in red cedar and lowered the back deck (also red cedar) to ground level, ensuring unobstructed views to the garden.

Upstairs, the couple turned the front master bedroom into a media room and used the quieter back guest room as their sleeping quarters. Finally, in the partially finished basement, Goodall commandeered a small room for a wine cellar and a larger one for listening to vinyl.

The twosome, who married later in life, have different tastes – he’s a modernist who prefers logic and order, and she’s more eclectic – but they nevertheless managed to meld their possessions and their design preferences to harmonic effect. (Luckily, when they moved in together, says Rissman, he had more furniture and she had more art.) Together, they have crafted an incredibly comfortable home that reflects their mutual respect for the past and their modern, artistic sensibilities.

Originally published in our Spring 2014 issue as Collage of Art & Design.