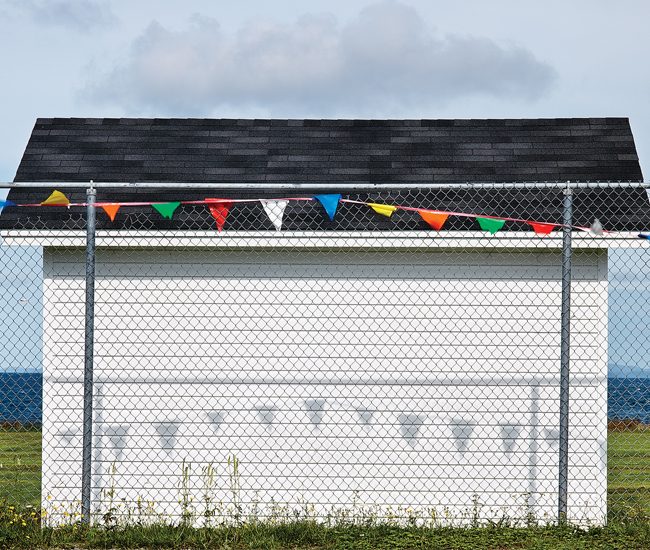 What to see at the month-long 2016 Contact Photography Festival

Now in its 20th year, the Scotiabank Contact Photography Festival spreads images by a talented roster of international photographers across 100-plus Toronto galleries and businesses. Among the exhibitions on view throughout May, a number spotlight the beauty of the built form. Below, we flag five photography shows that focus on architecture and design.

Each of Dean West’s crisply stylized, carefully staged shots tells a complex narrative, complete with an eclectic cast of characters and rich, nuanced settings. In Palm Springs #1, for example, a minimalist, mid-century modern home – note the Flos Arco floor lamp – serves as the backdrop to the dissolution of a relationship. The homeowners stand facing opposite directions – one craving a closer connection to the deer outside, the other embracing domesticity with a dress that matches her living room furniture. Other similarly surreal situations on view depict a man emerging from a pool naked, plus a motley crew of disengaged ferry passengers. Apr 27-Jun 4. Free. Alison Milne Gallery, 134 Osler St, Wed-Sat 12-6.

2 A City Transformed: Images of Istanbul Now and Then

Collecting past and present depictions of Istanbul, this photography show charts the rich history of Turkey’s most populous city. Incredible 19th-century panoramas of what was then known as Constantinople are displayed alongside Murat Germen’s shots of the skyline of modern-day Istanbul. Germen’s warped images exaggerate the mega-city’s scale while drawing attention to details that linger from days gone by. $20. To Jun 26. Aga Khan Museum, 77 Wynford Dr, Tue 10-6, Wed 10-8, Thu-Sun 10-6.

Born-and-raised Newfoundlander Ned Pratt captures the rugged beauty of his home province. Shot dead-on with simple colour palettes and stark compositions, many of his images bear closer resemblance to abstract geometric paintings than to landscape photography. What gives them added depth is the rich textures of the vernacular architecture depicted. Wooden shelters and other structures appear beautifully weathered by the region’s harsh climate, as is the case with the worn fence in the appropriately titled South of Ragged Island. Other photos spotlight a more recent addition to this picturesque region: the award-winning architecture of the Fogo Island Inn. Apr 28-May 21. Free. Nicholas Metivier Gallery, 451 King St W, Tue-Sat 10-6.

Rock band R.E.M.’s cheery doomsday lyric “It’s the end of the world as we know it, and I feel fine” would make an appropriate caption to artist Alex Mcleod’s intricately-detailed cityscape. The computer-generated image depicts an apocalyptic scenario that is more enchanting than alarming. Glass and concrete towers, soaked in a soothing, otherworldly glow, are shown flooded by floating globules of water. While mesmerizing, the image lacks any signs of human life – hinting that the spectacle depicted has come at a cost. Indeed, Mcleod considers his show a warning not to become so seduced by the beauty of bright lights and big cities that we ignore the implications of unrestricted development. May 1-Sep 18. Free. Harbourfront Centre parking pavilion, 235 Queens Quay W

Not since American Beauty have plastic bags looked so beautiful. So often a container for other goods, the transparent packaging is celebrated in Sjoerd Knibbeler’s Current Studies series as a fascinating subject in its own right. The Dutch artist’s photographs document how such bags respond to air currents, showing them warped into dramatic, expressive shapes. The inflated mass in Current Study #3 resembles a human heart, while Current Study #10 evokes a topsy-turvy tower. By shooting this everyday sidewalk litter against vibrant backdrops that recall supermarket signage, Knibbeler also calls to mind anti-consumerism and environmentalism movements. Apr 26-May 31. Allen Lambert Galleria, Brookfield Place, 181 Bay St, Sun-Sat 9-9.