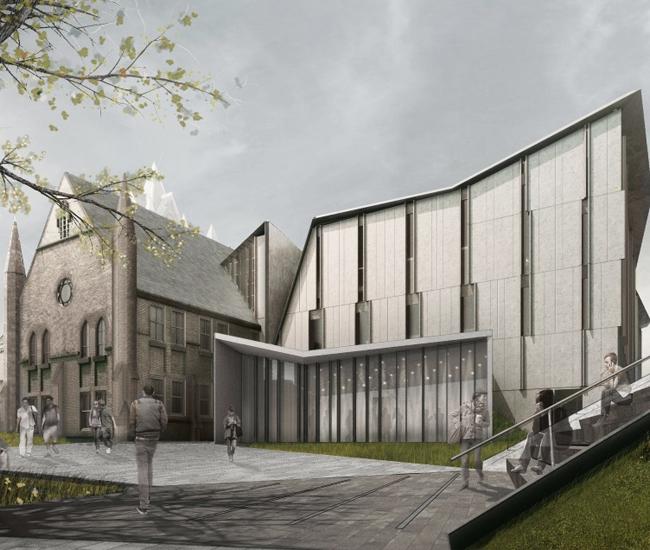 Mizrahi Developments generated a lot of excitement when they announced Norman Foster as the designer of an upcoming condo tower at Yonge and Bloor, but the project won’t be the city’s first by the acclaimed British architect. The University of Toronto’s Foster-designed Leslie L. Dan Pharmacy Building, a 12-storey glass box that houses two suspended, orb-shaped lecture halls, opened in 2006.

In the past ten-odd years, several other notable architecture firms have also envisioned avant-garde buildings for Toronto campuses. The most famous of these, of course, is OCAD U’s Sharp Centre for Design by Will Alsop. The tabletop-on-stilts structure became so iconic that when the art school rebranded in 2011, it adopted a box-y identity inspired by the building’s checkerboard cladding.

Hoping to use architecture to bolster its own identity, Ryerson University recently tasked Snøhetta with designing a student centre that could signal the start of a new chapter for the school. The finished building, an angular glass gem covered in a digitally-printed pattern, is a striking campus landmark that caters to students looking for the kinds of modern, informal workspaces you might expect in a Google office building.

What’s next for the city’s universities? Below, we spotlight six upcoming academic facilities that deserve top marks. Don’t worry – there won’t be a pop quiz at the end.

Daniels Building
1 Spadina Cres
Walking through U of T’s St. George campus is like taking a crash course in architectural history. University College, a Romanesque building from the 1850s, sits on the same street as Brutalist behemoth Robarts Library and such slick 21st-century designs as KPMB‘s Joseph L. Rotman School of Management expansion. Next up: a project by Boston firm NADAAA that weaves past and present together all on one site. With guidance from the heritage experts at ERA Architects, the firm is restoring an aging Gothic Revival building and adding a contemporary glass, stone and steel wing. When finished in 2016, the complex will serve as the new home of the Daniels Faculty of Architecture, Landscape and Design, inspiring the next generation of architects to repurpose old structures in thoughtful new ways. 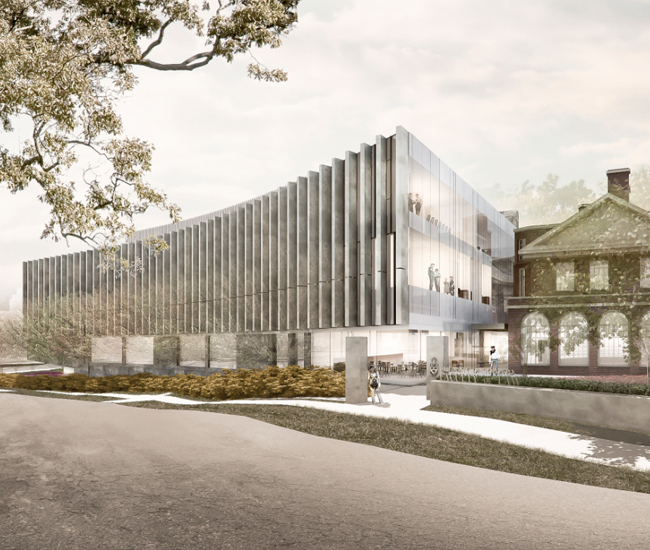 Jackman Law Building
78 Queen’s Park Cres
U of T’s Faculty of Law is set to move into courtly new Hariri Pontarini Architects and B+H Architects-designed digs next year. The department’s extensive renewal project includes renovations to two existing buildings, plus the construction of a three-storey addition designed to mimic the curved shape of Queen’s Park Crescent, which it overlooks. A facade lined in nickel fins gives the new wing the rhythmic elegance of a Greek temple, while glass walls keep it decidedly modern. No objections here, your honour. 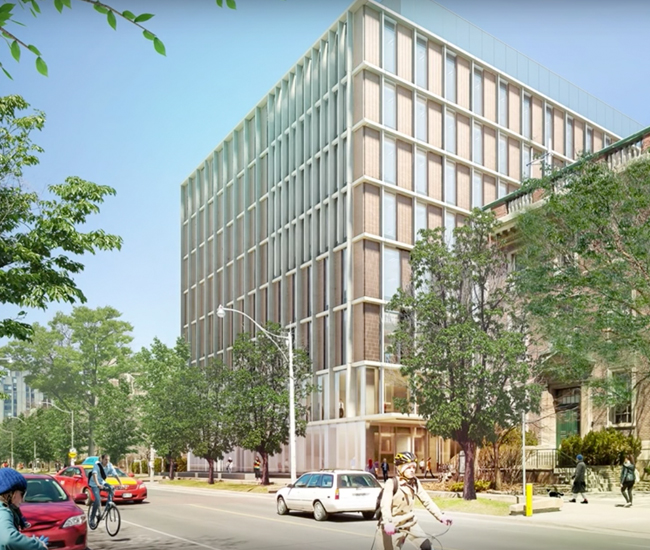 Centre for Engineering Innovation & Entrepreneurship
55 St. George St
At first, the handsome eight-storey tower Montgomery Sisam Architects designed for U of T’s engineering faculty does not seem like anything radical. But don’t be fooled by the building’s traditional appearance: its sustainable features are cutting-edge. For example, the structure’s exterior frame integrates passive solar shades that leverage the sun’s heat in January and block it in summer. While the complex won’t be finished until 2017, it’s worth paying a visit to the site now. An 84-metre long construction hoarding mural by street artist Jason Wing (AKA Skam) salutes innovative designs by U of T engineering grads. Look for illustrations of the solar-powered Horizon race car and the ultra-efficient Nanoleaf light bulb. An “entrepreneurial hatchery” in the finished facility will offer assistance to students looking to get their own innovative ideas off the ground.

The Bergeron Centre for Engineering Excellence
Nelson Rd, North York
York’s Lassonde School of Engineering asks, “Why not keep your head in the clouds?” Designed by ZAS Architects, the faculty’s soon-to-open building is inspired by the sky. The distinctive structure’s top storeys are encased in a billowy form modelled after a mass of water vapour, while the lower levels open up to a rugged plaza that mimics a rocky landscape. Inside, flexible, open-concept spaces promote collaboration. 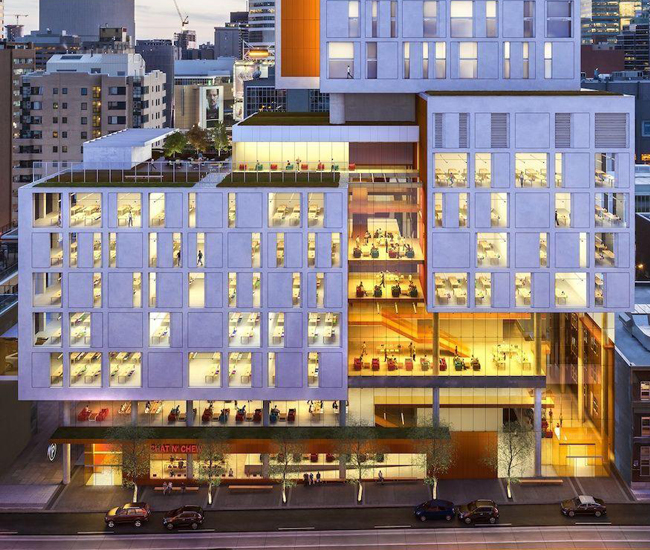 Church Street Development
270 Church St
After years of watching such hyper high-density developments as the 78-storey Aura condo tower rise nearby, Ryerson has decided to follow suit. Over the next three years, the university will transform a parking lot on Church Street into a massive mixed-use facility designed by Perkins+Will. Set to open in 2018, the health sciences complex will house the school’s nutrition, midwifery, nursing and public health faculties alongside a new student residence. Irregularly placed windows on the building’s upper podiums and tower create a pattern that looks something akin to a DNA sequence. 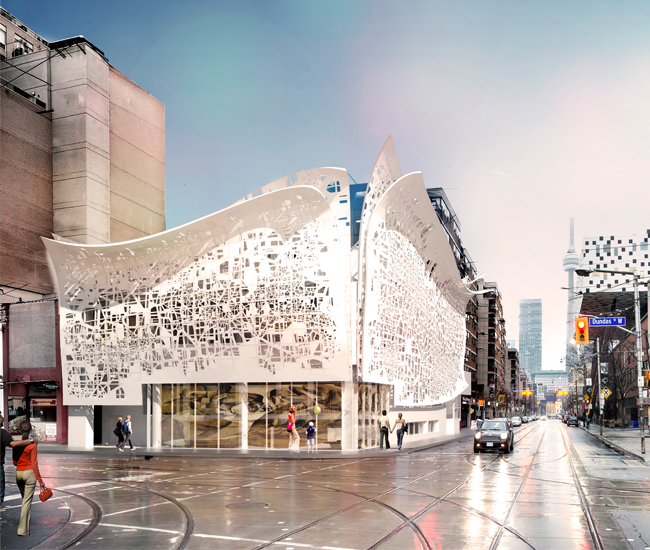 Rosalie Sharp Pavilion
115 McCaul St
Still in the planning stages, this project will transform an OCAD U administrative building into a mixed-use student centre offering both study and exhibition space. The proposed design by Bortolotto Architects wraps the building in curled white aluminum sheets. An intricate pattern laser-cut into each one was inspired by a mapping exercise that tracked student movement throughout the city. Smartphone or tablet-toting students will be able to interact with the facade via an app developed by the school’s Digital Media Research Lab.