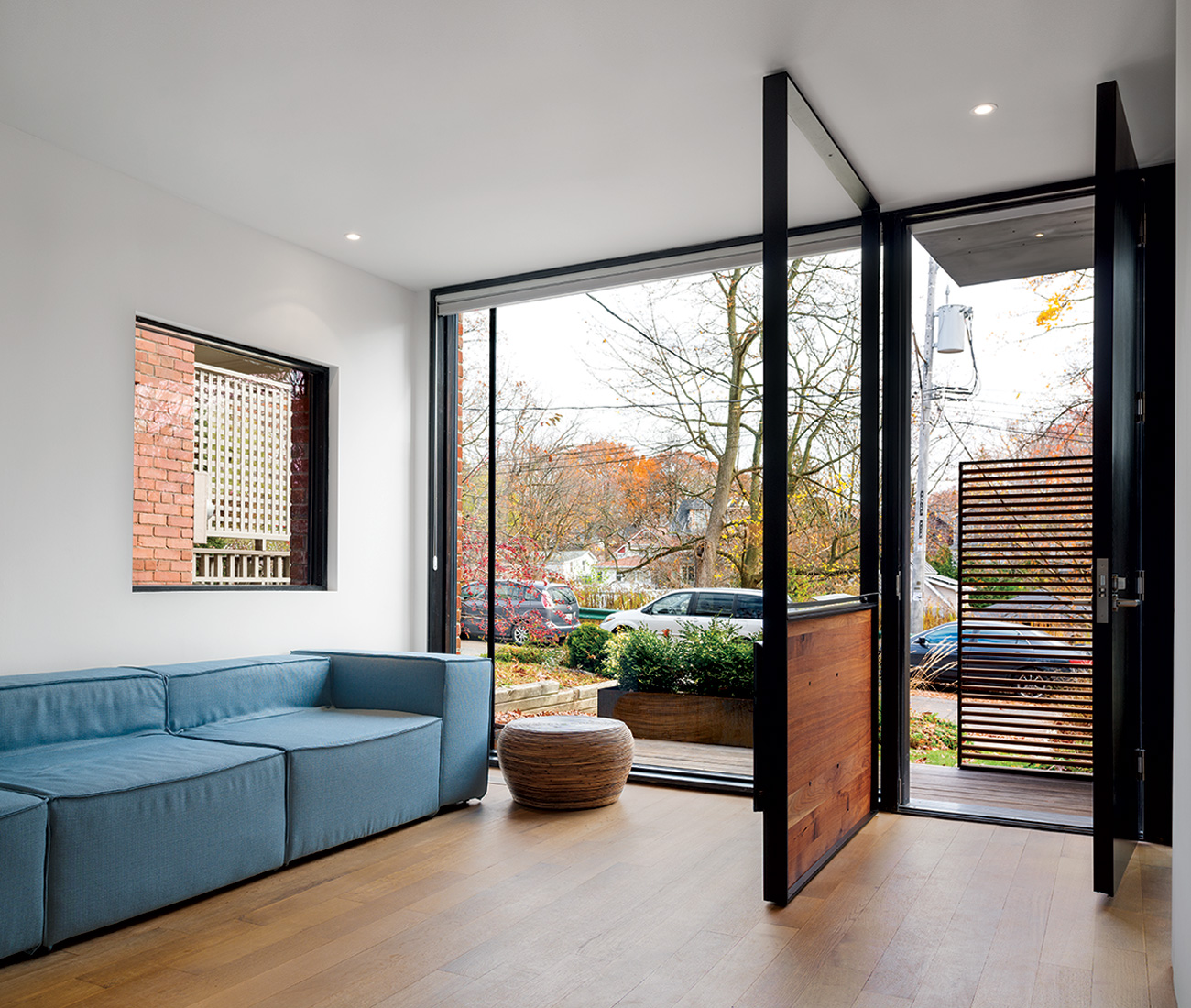 The entryway’s steel frame features a thin tray for stashing keys, and supports a flat screen TV opposite the sofa. 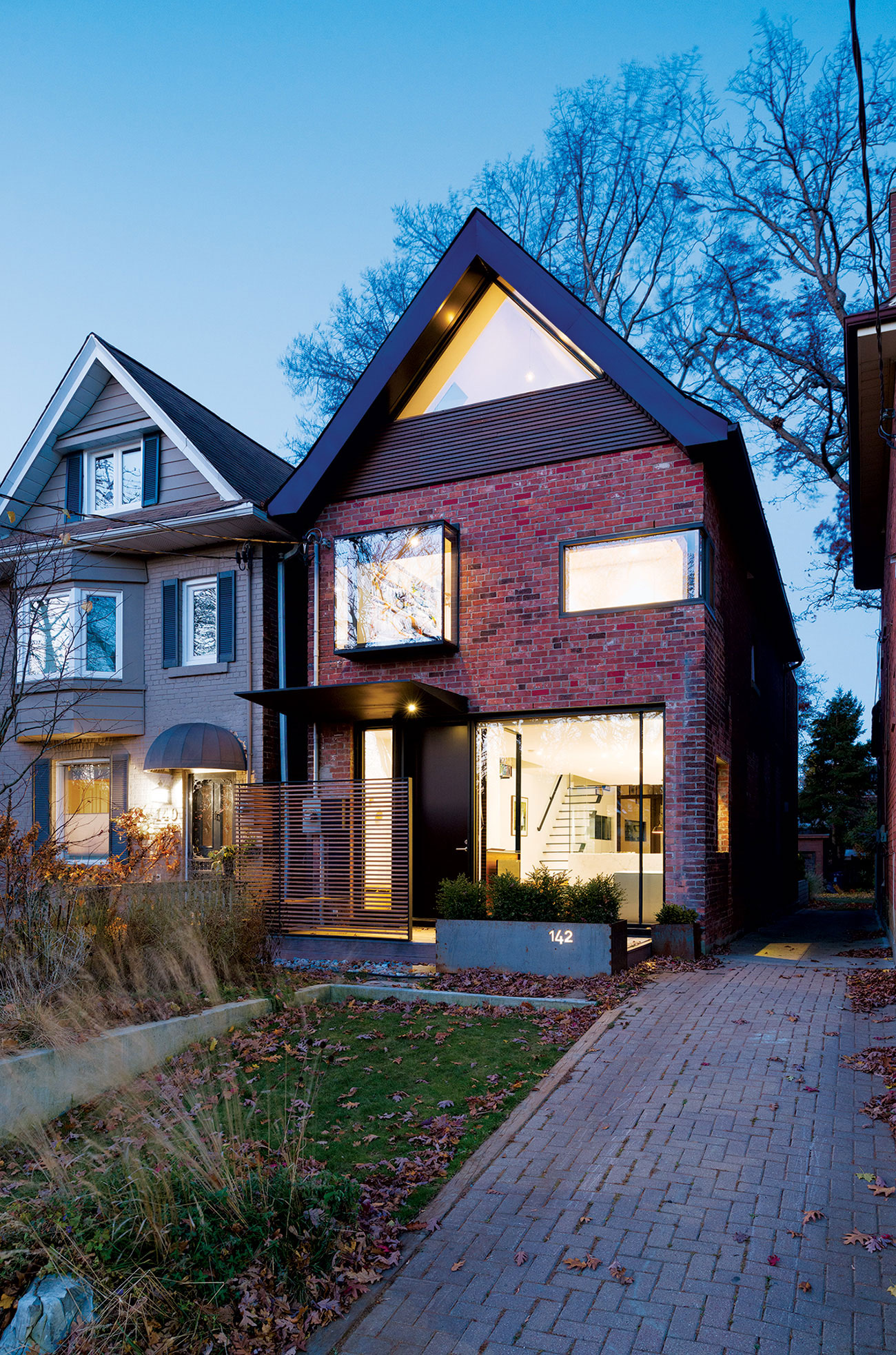 The house blends into the neigh­bour­hood, yet stands out from it, thanks to surprising glass insertions. 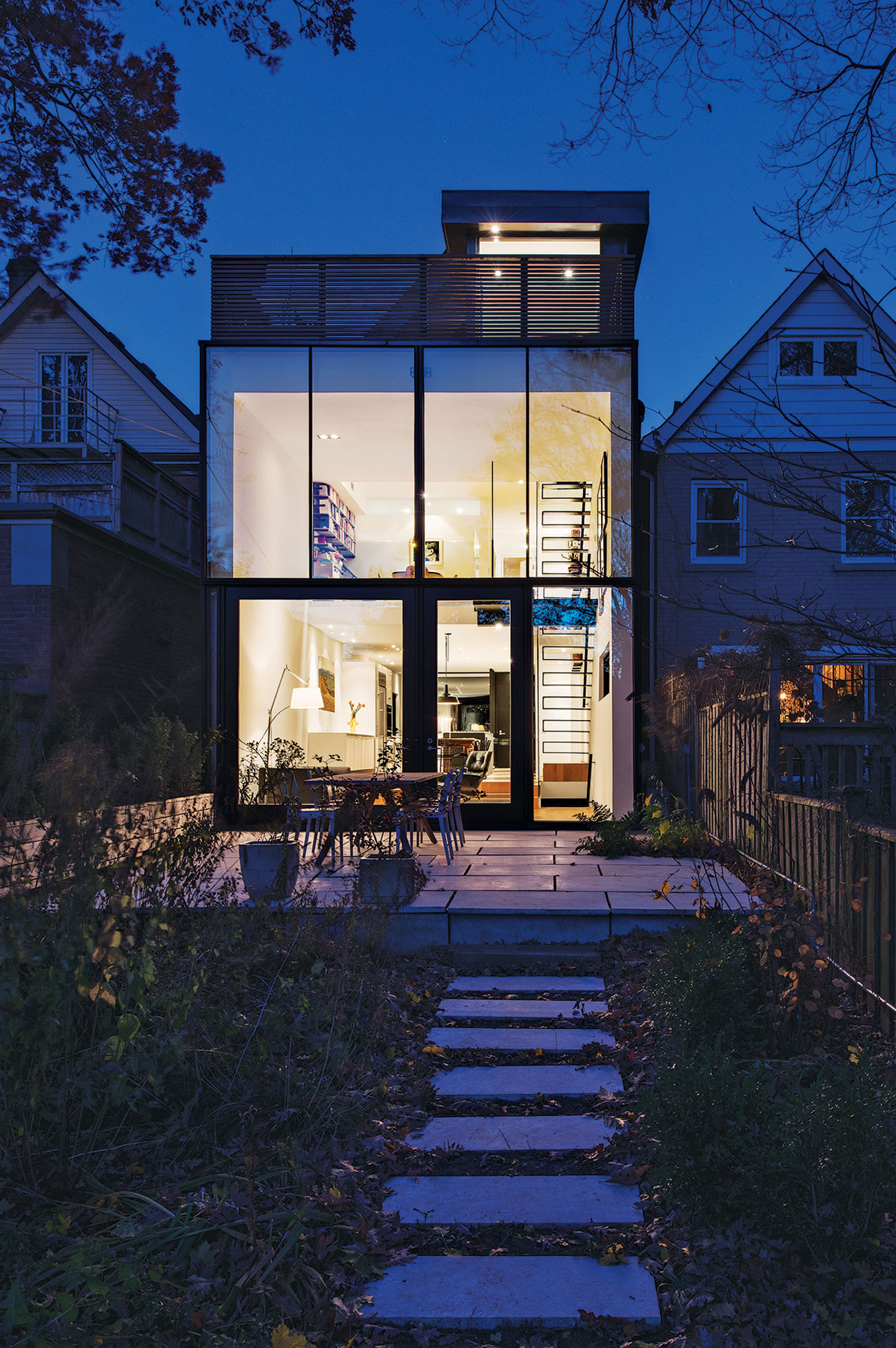 The fully glazed rear facade leads out to a patio whose flagstones are made of reclaimed marble cladding from Toronto’s First Canadian Place.
Share Tweet Pin Email Print

On a quiet street in Toronto’s east end, one modern home blends in with the early 1900s builds that surround it – until you get closer. Then its surprising insertions begin to materialize: A squared-off bay window protrudes from the second floor, and the attic’s glazing forms a crisp triangle. A steel cantilevered canopy and an ipe screen enclose the entrance and the expansive front window, which also enhance the central motif. Local designer Johnson Chou fashioned the 178-square-metre, three-storey house to read like a series of frames. From virtually every angle, openings provide unexpected perspectives for owner Joseph Siahou, his wife Emma, and their two young children.

In the front sitting area, which is animated by a bright blue sectional, the main window and a square cut-out in the adjacent wall reveal a generous street view. At the opposite end, the fully glazed rear facade extends the sightline past the open concept kitchen and the double-height living room to the back patio. Smaller framing moments pack their own surprises. On the second storey, Chou inserted a glass section directly into the floor. The effect is a trompe l’oeil : two shelves on the main level appear to burst through the opening, extending as a bookcase on the second level. “I wanted to provide visual access throughout the space,” says Chou, “on the horizontal dimension and the vertical.”

The revamp constitutes a major departure from the home’s previous life as a cramped three-bedroom residence sliced in half by a stair. After buying the place sight unseen, Siahou called Chou (who had designed both locations of Siahou’s Blowfish Restaurant and Sake Bar) during the couple’s first panicked walk-through. Chou got straight to work, knocking down walls and relocating the stairs to one side. He inserted a floating staircase made of 13-­millimetre-thick steel plates welded into rectangular boxes; inspired by Donald Judd, one of Chou’s favourite artists, the steps further the frame theme.

To transform the attic into the master bedroom and ensuite, an elegant sequence of spaces separated by glass enclosures, Chou flattened the ceiling but maintained the peaked front, where a sculptural Corian tub stands before the triangular window. (From the outside, the pitched roof blends in with its neighbours. “In the Beach, you don’t mess with twee,” jokes Siahou.) Chou also built a 4.5‑metre-deep extension off the back to support a terrace and create the living room, with its soaring ceiling. For the largest frame of all, meas­uring 5.3 by six metres, a dramatic curtain wall encases a massive pivoting door and a second opening that lead out to the marble slab patio. Chou used thin-lined mullions, so the window appears detached, floating. “There’s this gradual insertion of modernism throughout, until you get to the back,” says Chou. “I wanted the rear screen to be more abstract and create a dialogue with the front.”

Despite its bold aesthetic, this is a family haven, “a modern house that works like a home,” says Siahou. The marble-topped kitchen island is clad in doodle-happy chalkboard. In the daughter’s room, the bay window pops out to provide a reading nook filled with toys and trinkets, like a little castle turret. And the living room seems sparse for good reason: a trampoline usually resides here. Says Siahou, “I want to make our home the most attractive, so that all of the kids come here rather than some other place where they can get into trouble.”JOHNSONCHOU.COM