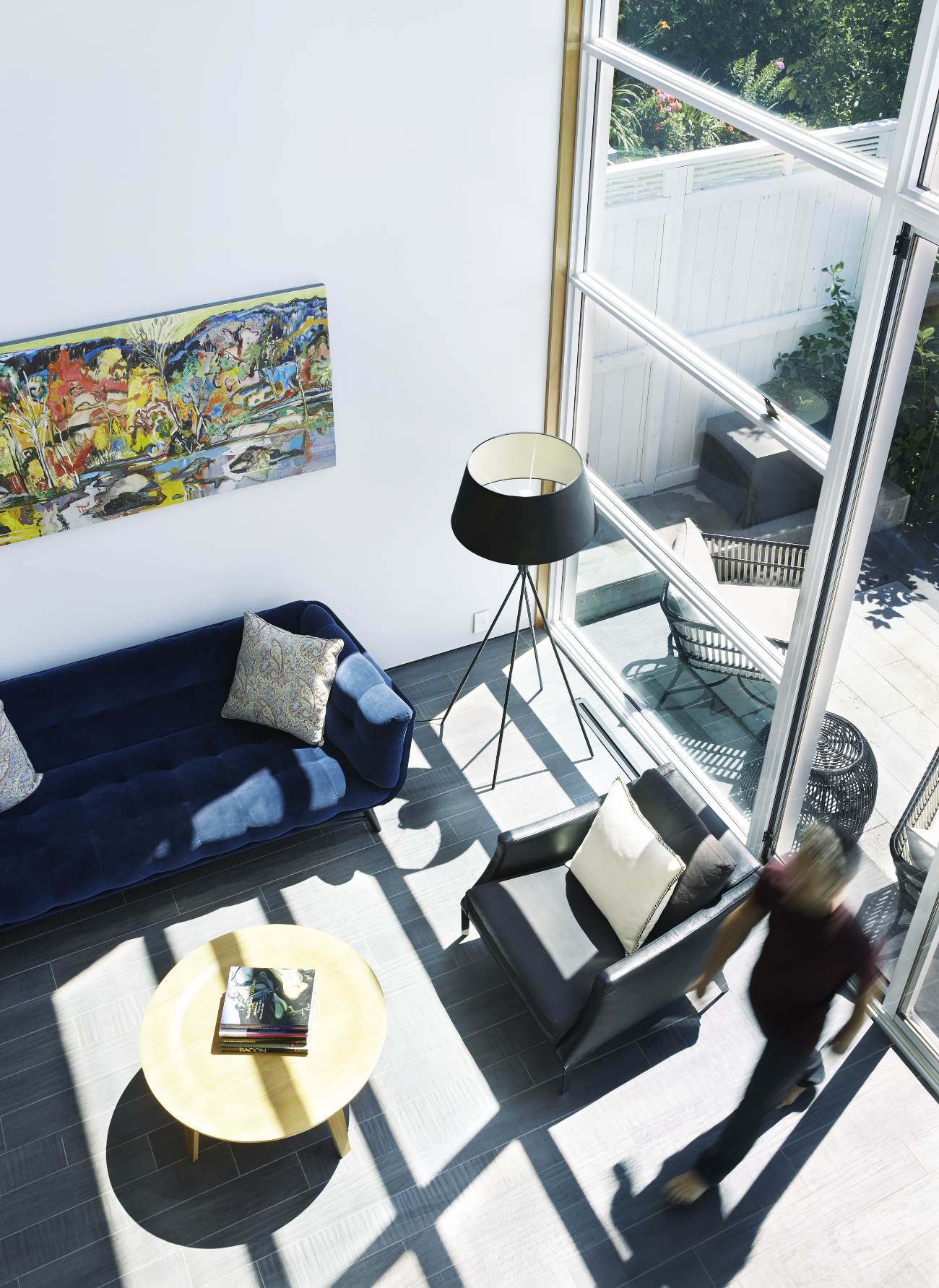 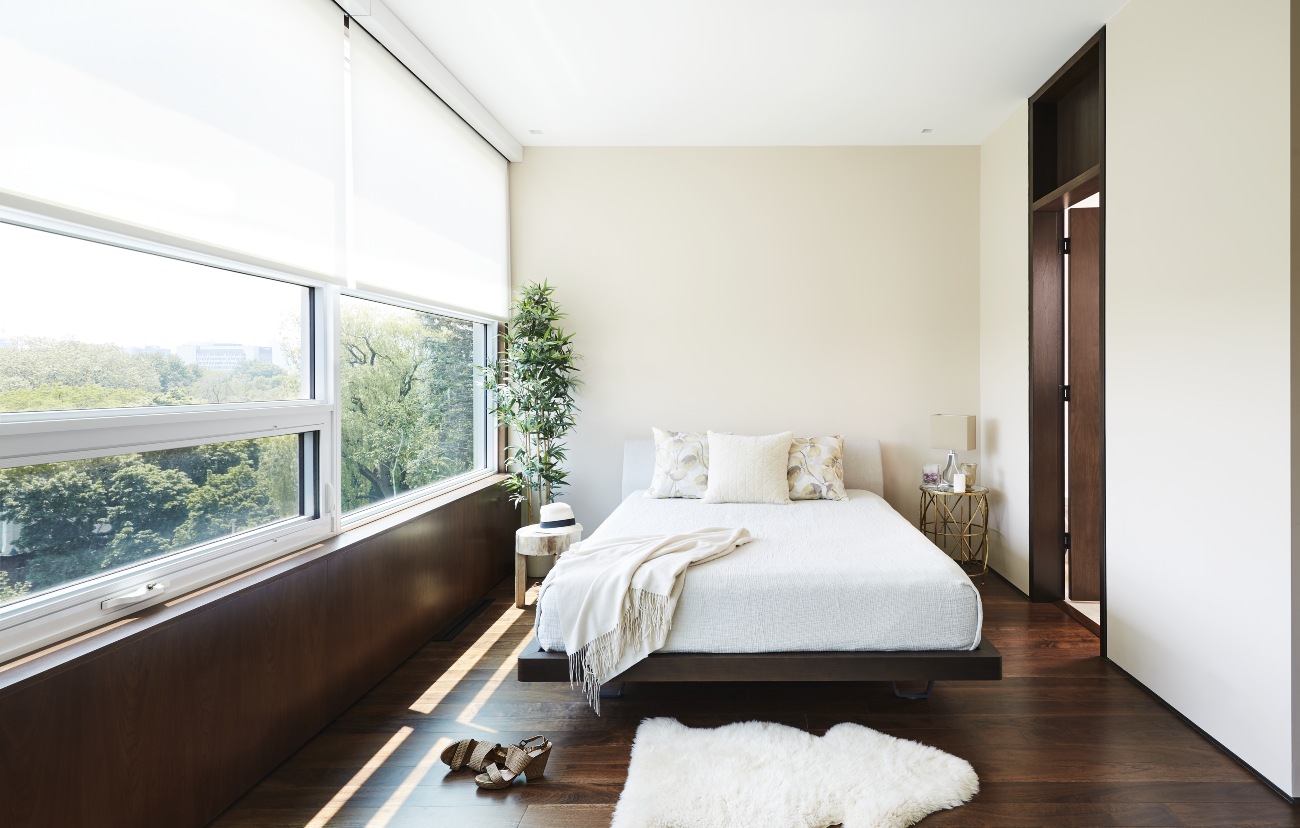 Engineered walnut (from The Floor Shop) runs throughout the third level, including the master bedroom and ensuite. Bed from Palazzetti. 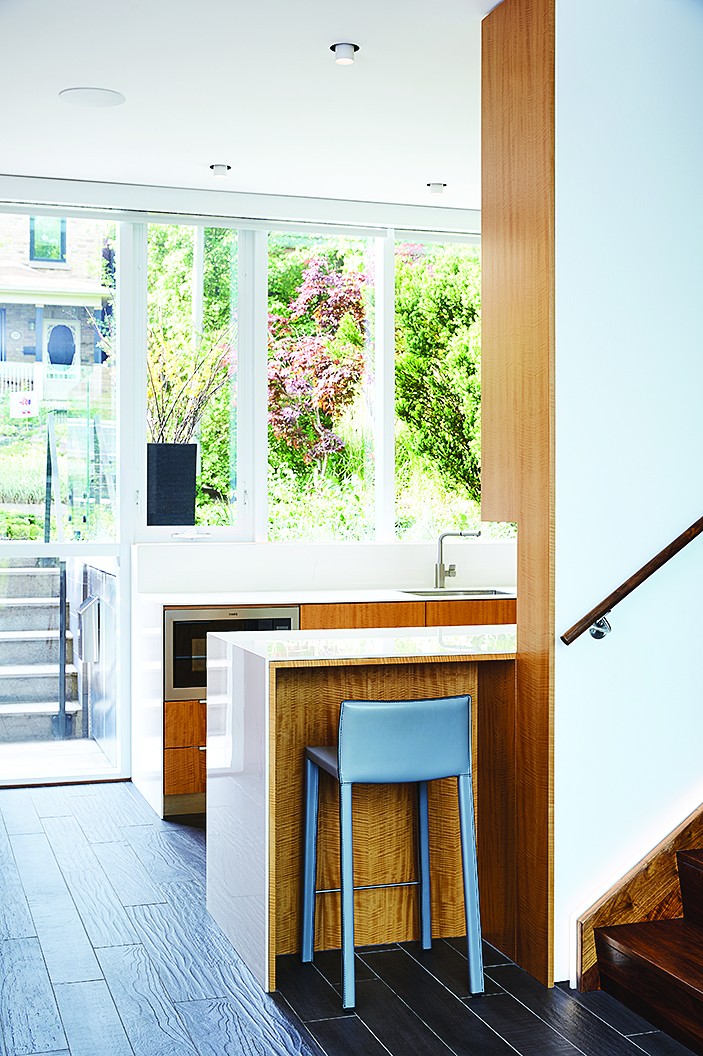 From the sidewalk, visitors step a metre below grade into the foyer beside the galley kitchen. Built by R&R Woodwork, it features bookmatched anigre wood topped with Laminam from Stone Tile.
Share Tweet Pin Email Print

There’s no mistaking Rudy Wallman’s house for his neighbours’. Situated among Riverdale’s Victorian and postwar homes, the translucent glass box was designed by Wallman – principal of Wallman Architects and a specialist in glass high-rise design – for his family of three. “We really wanted something that had no connection to the surrounding houses,” says Wallman. Freed from the constraints of peaked roofs and brick facades, and inspired by the iconic glass houses of Ludwig Mies van der Rohe and Philip Johnson, Wallman’s 320-square-metre home also maximizes outdoor space and interior light.

To make use of the small, sloping lot, Wallman spread the house over five levels, with the main floor set one metre below grade. “Unlike the houses on the street with porches, we did the opposite,” he says. “That allowed a more direct relationship to the overall landscape.” Not only does this split-level design make the most of the home’s modest footprint, it also allows light from the windows and skylights to penetrate deep into the structure.

Off the street, the front door opens into a galley-style kitchen. This leads to a double-height living room lit by a two-storey glass rear wall: the perfect perch to overlook the garden. A central staircase leads up to a second-storey office, which surveys the living room, and a bedroom that faces the street. The third floor, meanwhile, reveals a guest bedroom and a master suite, both illuminated by floor-to- ceiling windows. Another floor up, and through an operable skylight, the rooftop terrace provides panoramic views of downtown, Lake Ontario and the treetops of nearby Withrow Park.

Back on the street, the house’s glass facade transforms into a display case at night. To make allowances for neighbours and passersby, Wallman opted for glass treated with a translucent film and blackout curtains for nighttime privacy – essential in a house that attracts so much attention. No, Wallman’s glass box is not quite as transparent as Mies van der Rohe’s or Johnson’s, nor does it boast bucolic surroundings. It does, however, succeed in creating some of the neighbourhood’s best views, both inside and out. WALLMANARCHITECTS.COM