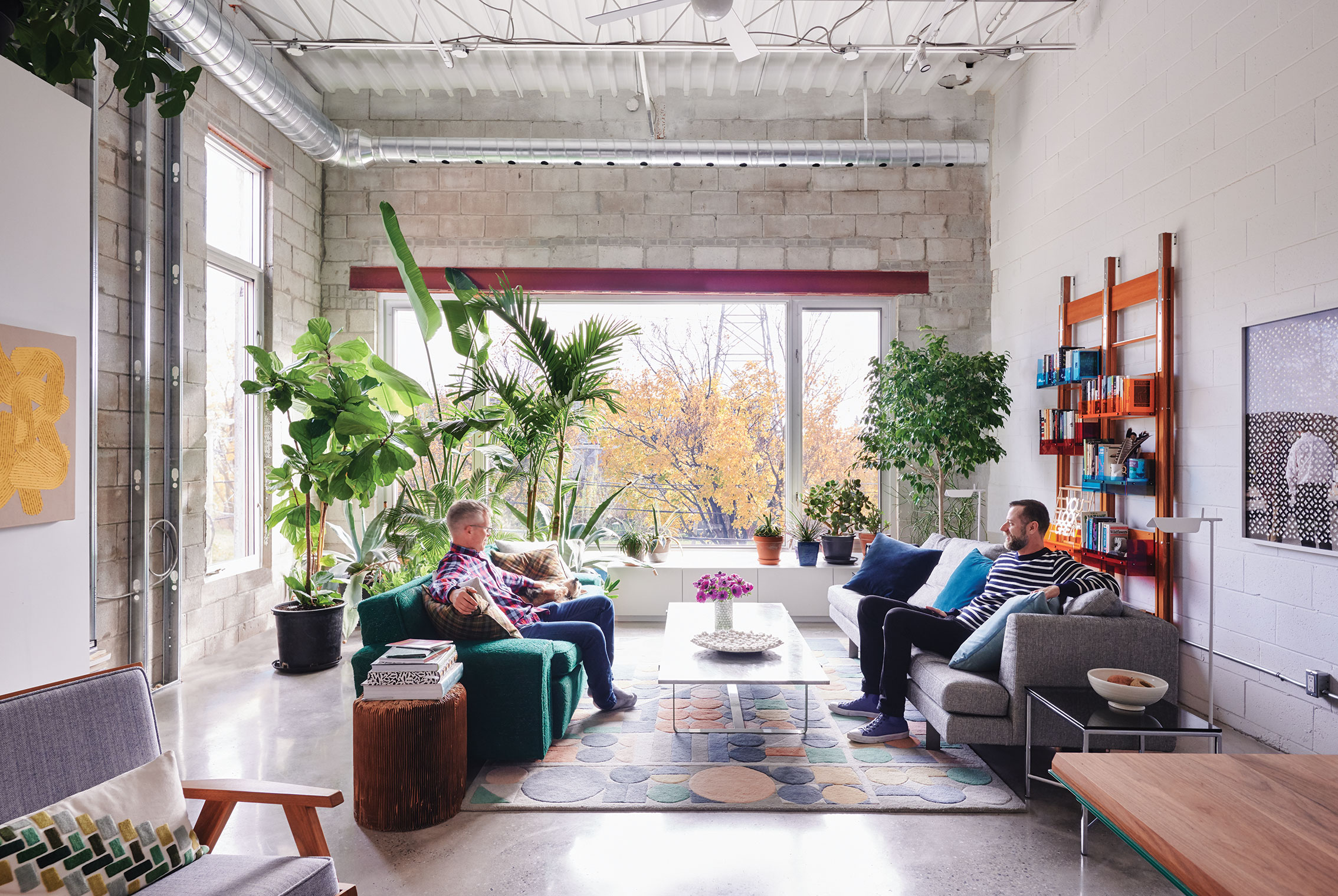 The green sofa is from the ’90s, but the grey Bensen sofa (from Kiosk) and Tab F floor lamps (from Flos) to either side of it are thoroughly contemporary. Area rug by Liz Eeuwes. 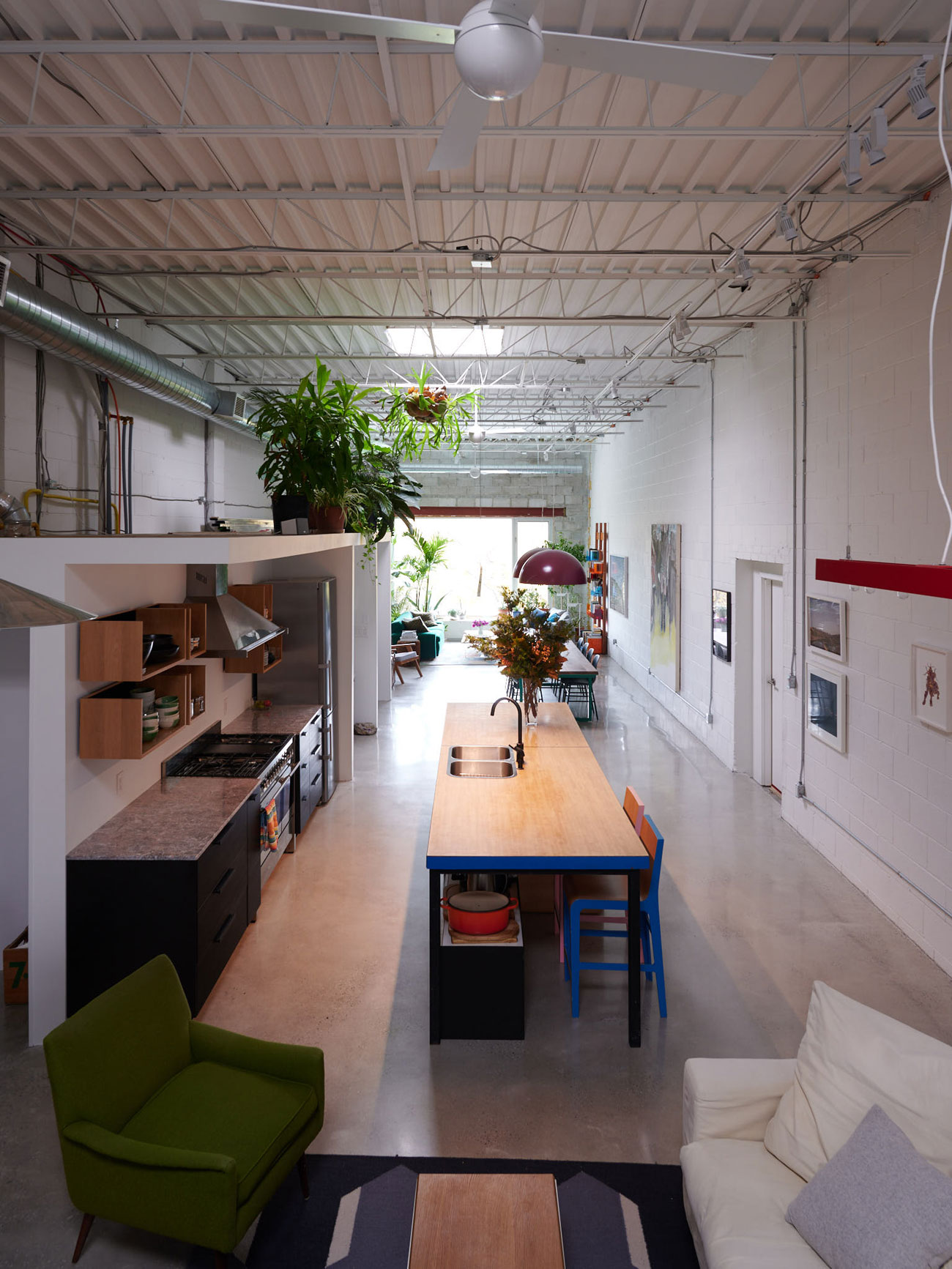 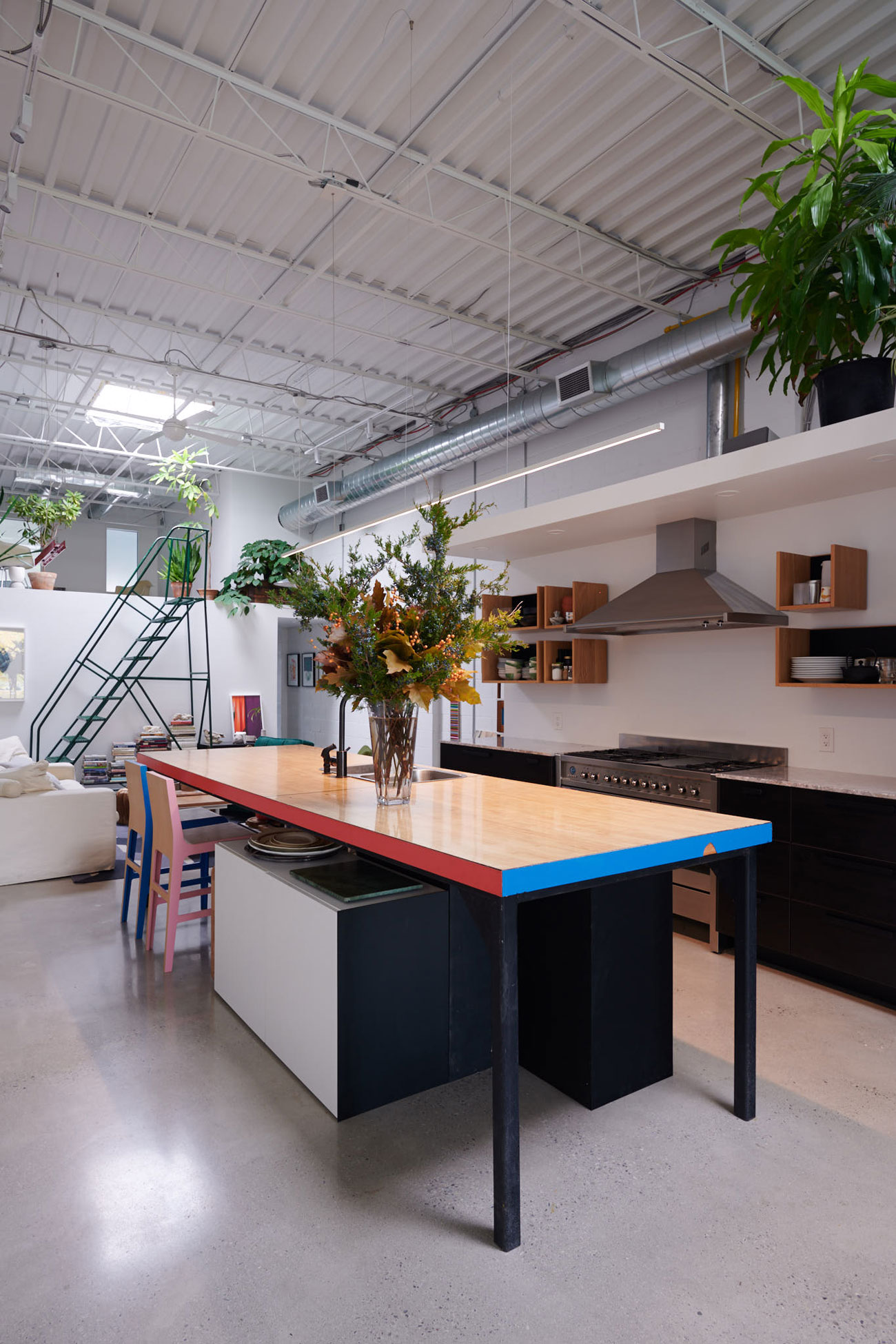 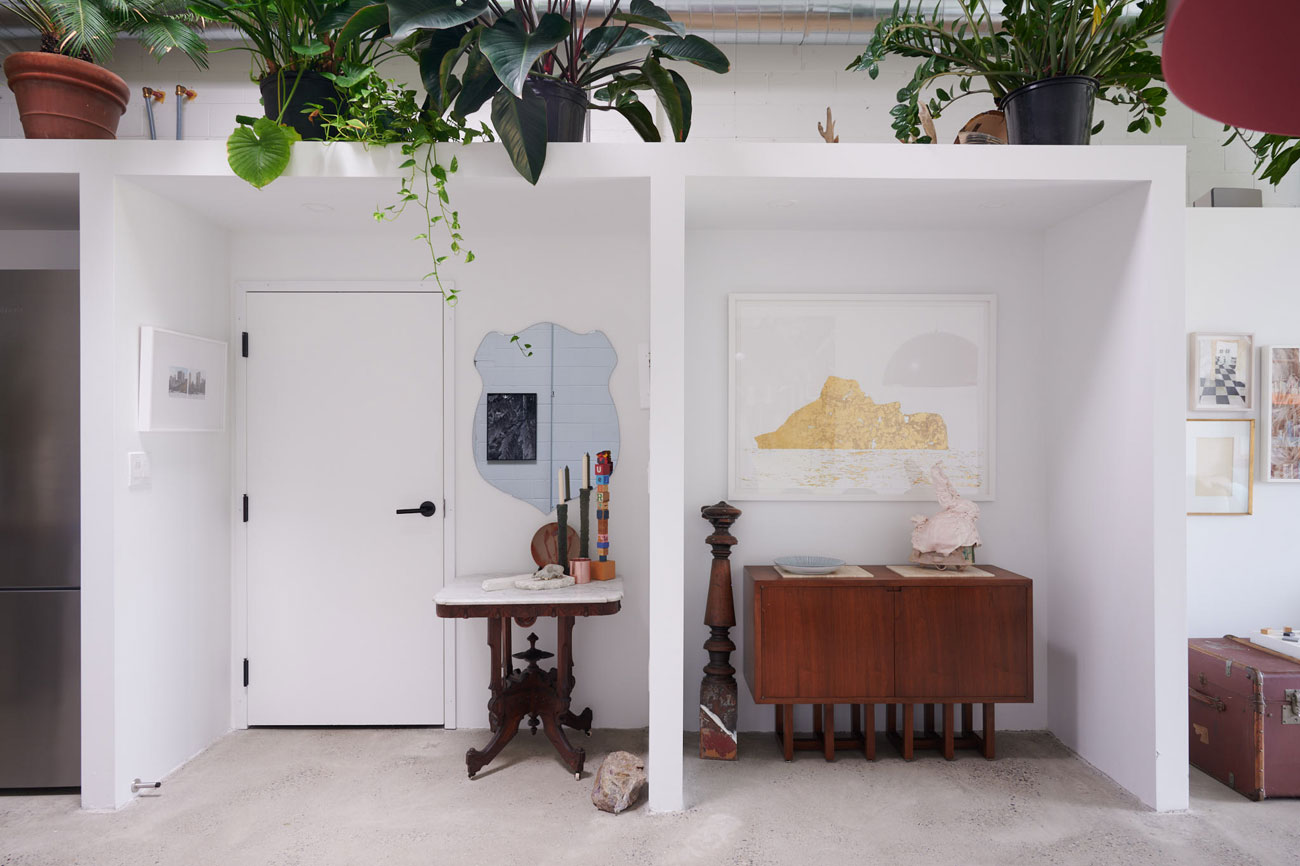 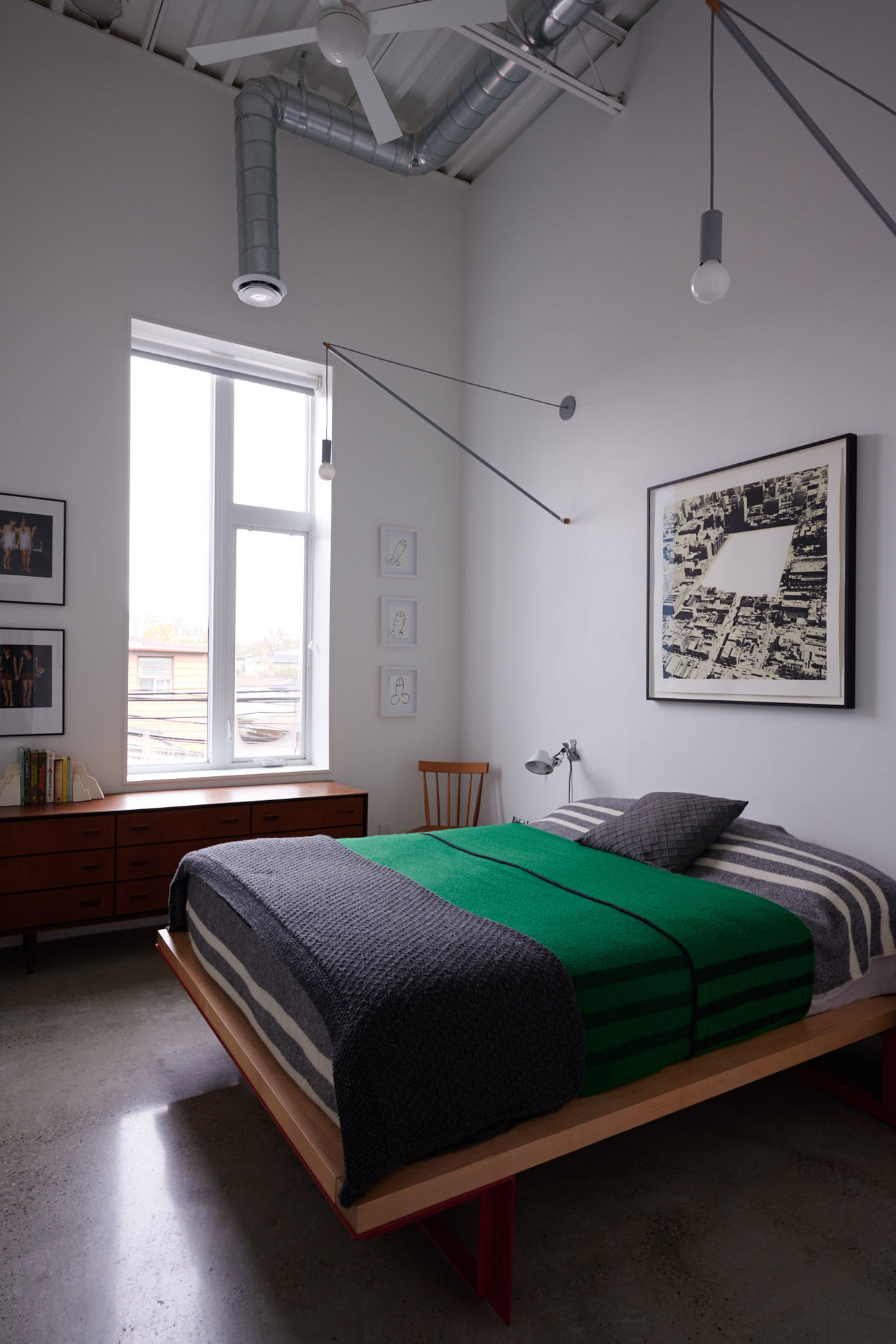 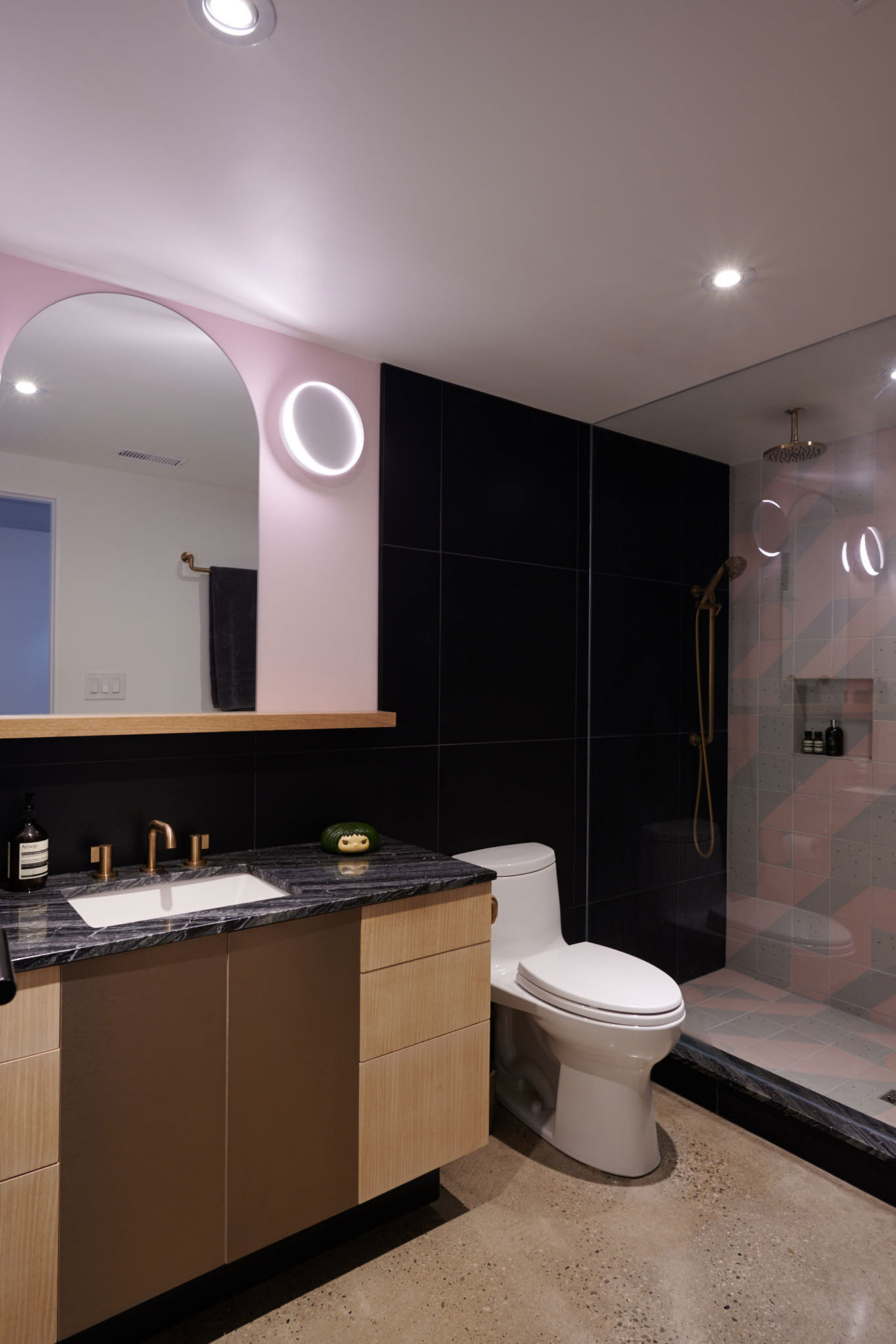 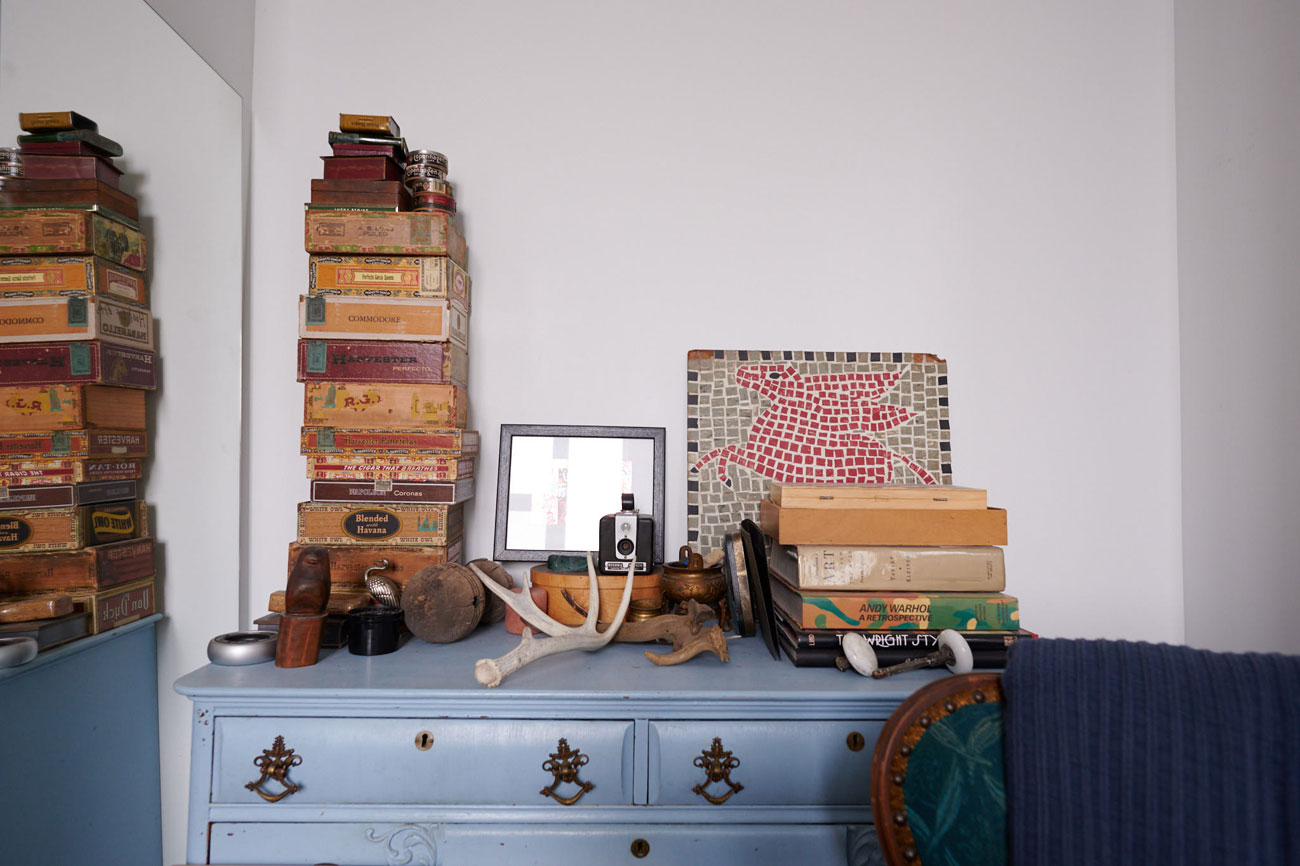 One way to gauge the success of a client-architect relationship is to ask either party if they remain friends post-project. As testament to a job impeccably done, partners Shaun Moore and Todd Caldwell speak almost daily with Tamira Sawatzky, the architect of their 185-square-metre hard loft on Geary Avenue, and frequently have dinner with her and her wife, filmmaker Elle Flanders.

Their proximity helps: the four not only live across a red-carpeted hall from one another, each in similar industrial conversions, but they also work out of the building (the former warehouse of a bomboniere importer), which they co-own. Moore and Caldwell run side-by-side retail shops below their place – Made Design, which specializes in custom-designed furniture, and Emblem, a floral design studio – whereas Sawatzky and Flanders are partners in Public Studio, an art and architecture practice with an office next door.

Such amicable co-living is rare, says Sawatzky. “And it’s not something we take for granted,” adds Moore. It’s also not something that happened overnight. Moore and Caldwell first met Sawatzky in 1998, the year the three all moved to Toronto from their hometown of Winnipeg. Sawatzky later renovated the couple’s old Cabbagetown Victorian, embracing its pre-modern charms while adding modern amenities.

“When Tamira told us about the Geary building in 2016, where we could both live and work and not pay expensive rent for our stores anymore, we didn’t hesitate,” says Moore. Once again, Sawatzky embraced the existing essence of the space and layered in livability. Industrial open web steel joists, a corrugated-steel ceiling, polished concrete floors and cinder-block walls envelop the sprawling living areas. The spaces shine under skylights that pour sun into the deep floor plate.

To further infuse warmth, Moore carefully selected wood furniture and finishes. The dining room table, his own design, is topped with dark, richly veined walnut. The bathroom cabinetry blends white oak and shimmering brass. Two bedroom suites tucked into the back of the loft are decked out in mid-century teak. An embrace of the unexpected gives things a lift, too. A mezzanine sitting space that overlooks much of the loft is accessed by a vintage rolling library ladder. “We found it here and decided to keep it,” says Caldwell of their decision to give the old steps new life – just as they’ve done with the warehouse itself.

Get the Designer: Public Studio