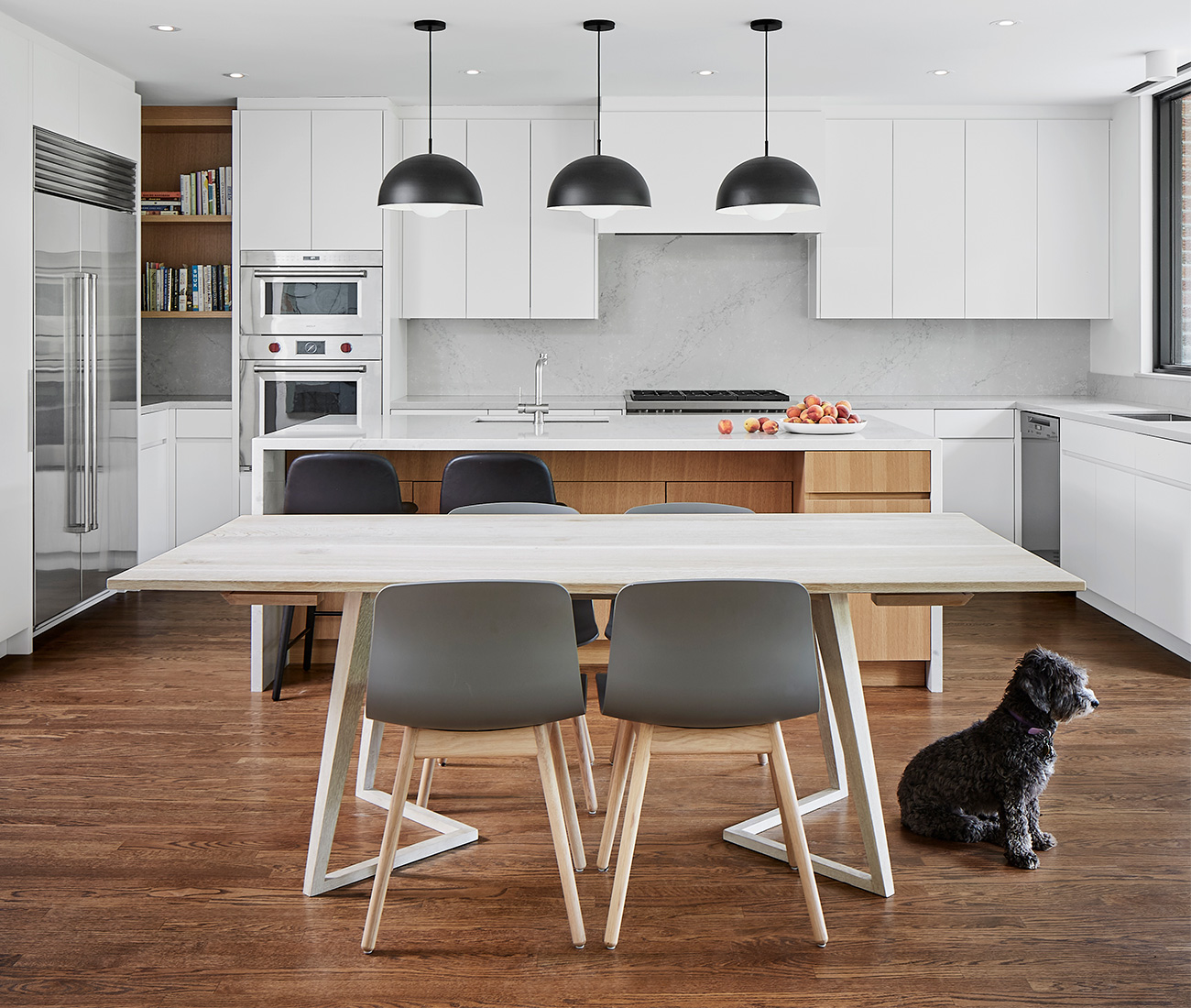 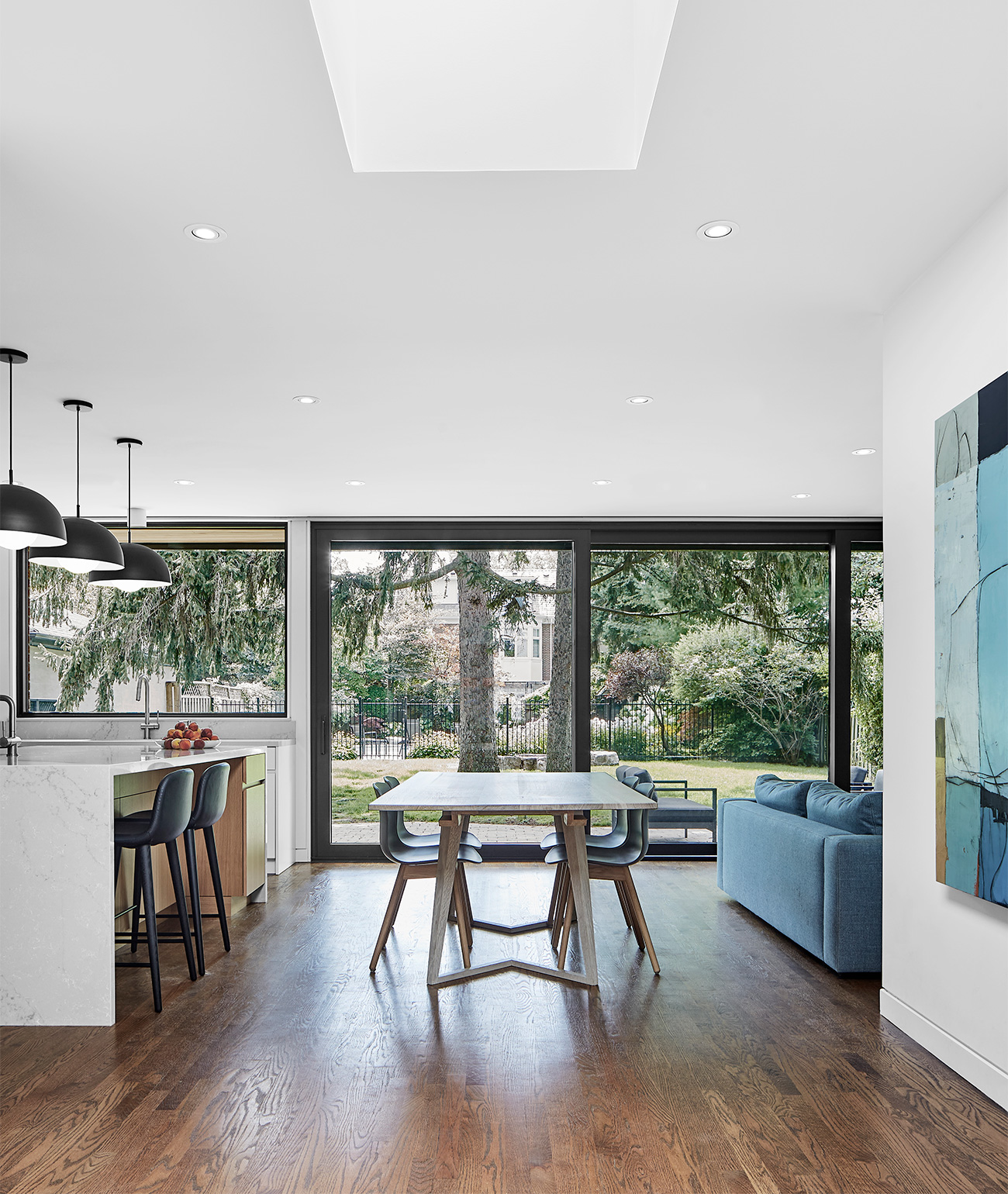 One large skylight, from Velux, illuminates both kitchen and family room. 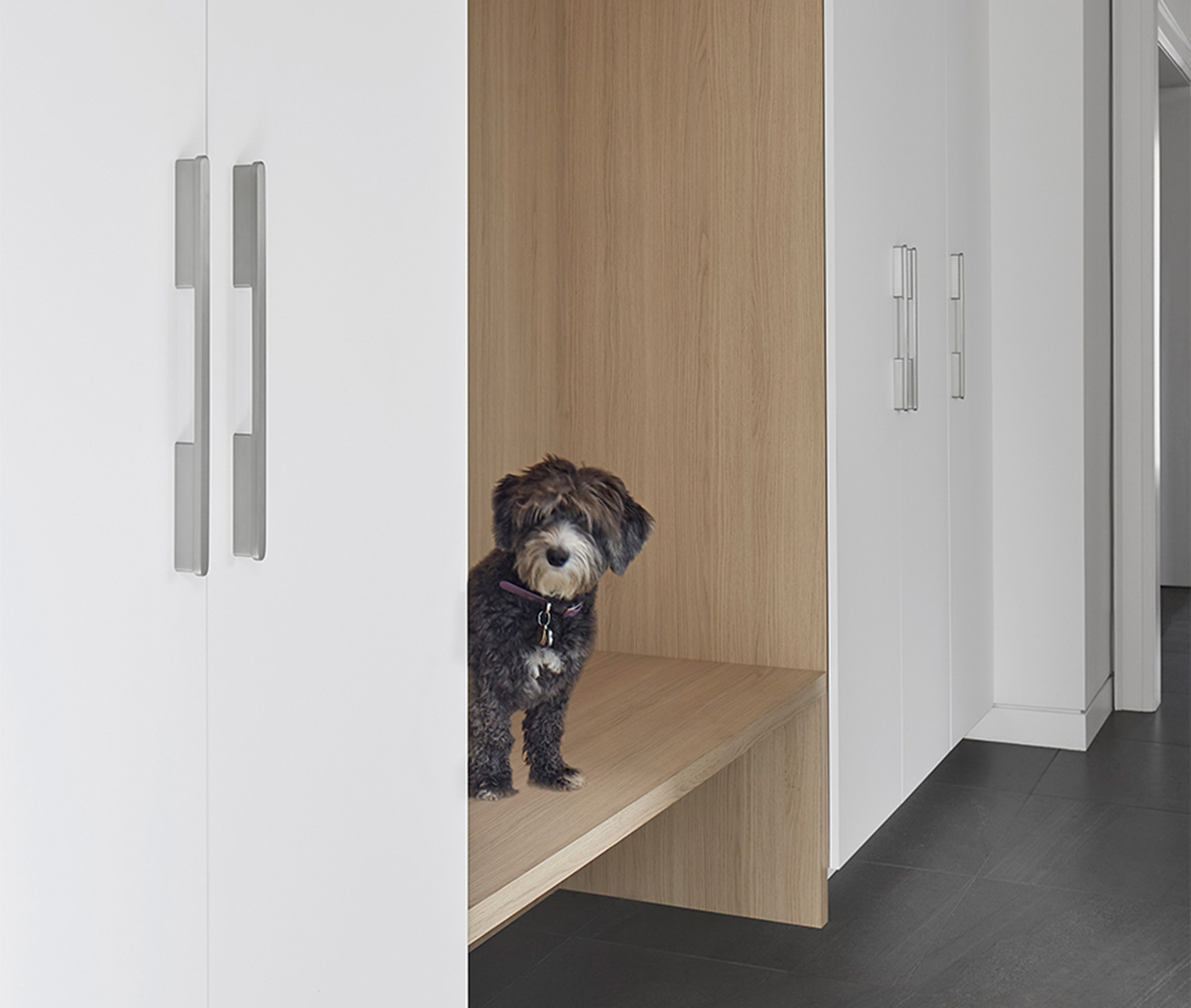 Marley peeks out from the storage system in the new mudroom. The cubby is clad with water-resistant Decotec; flooring from Stone Tile. 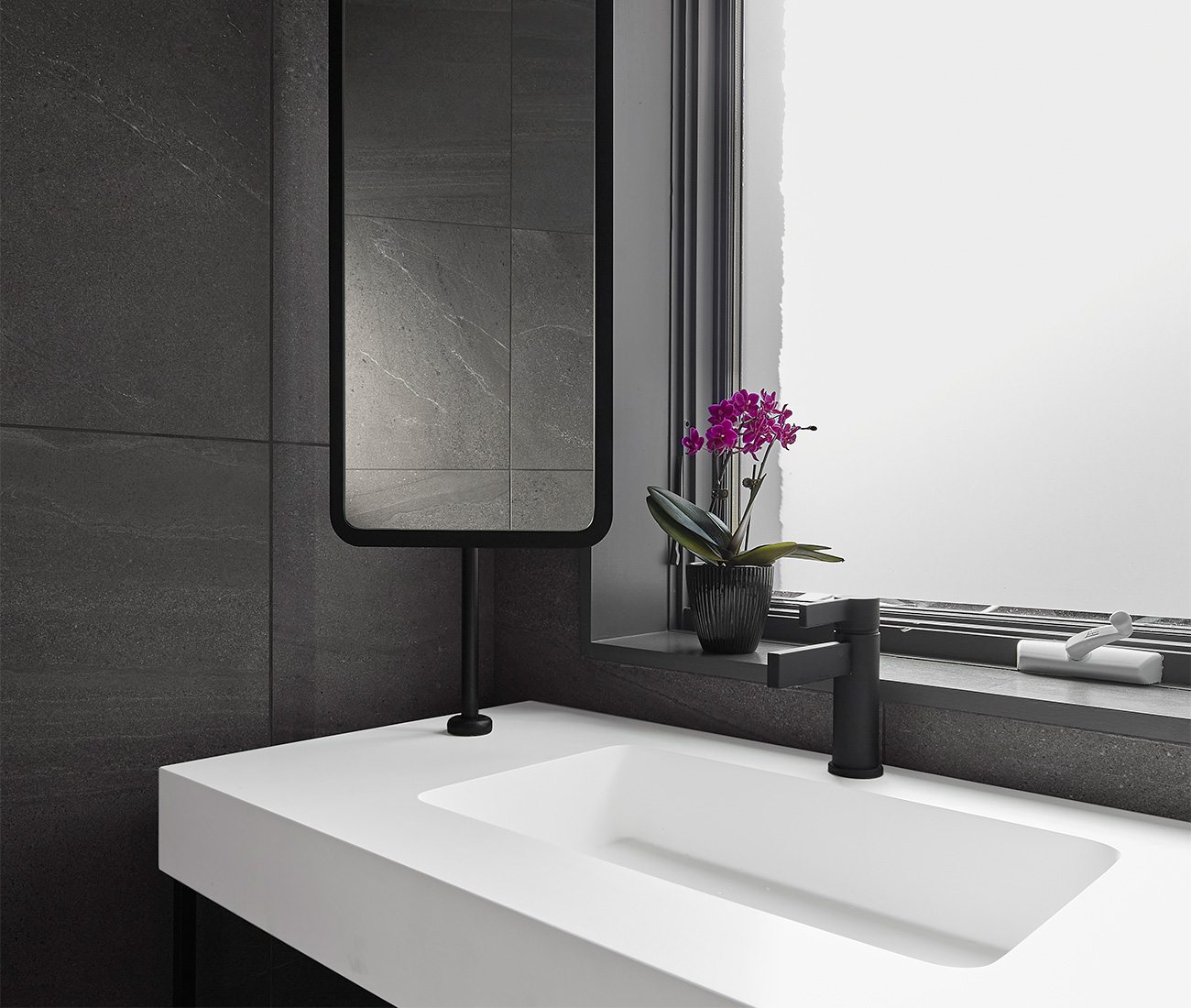 Preferring not to block this powder room's single window, Myers opted for a pivotable mirror (by Homa Signs) instead. Faucet and vanity from Roman Bath. 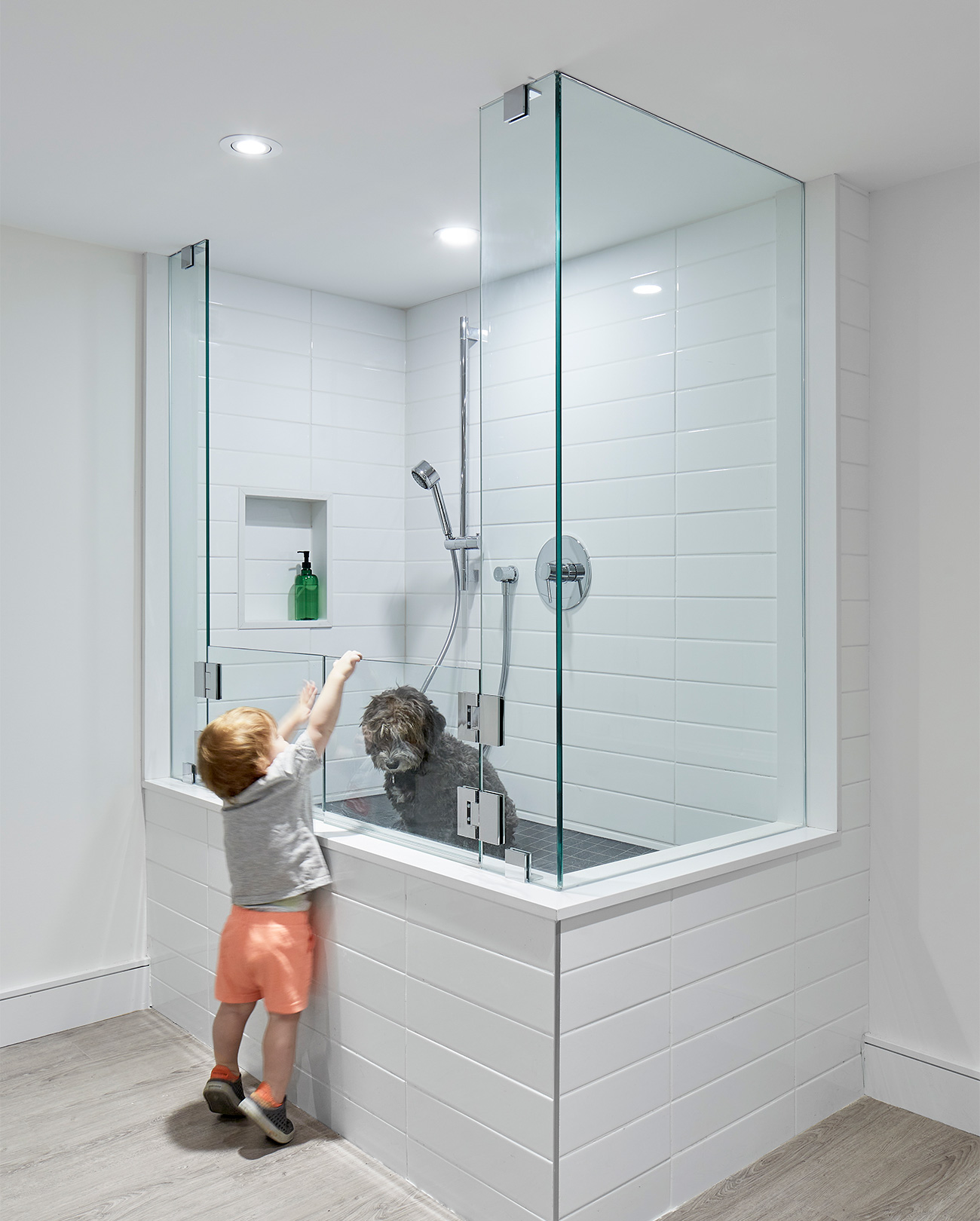 Muddy Marley gets a scrubbing in his own personal shower, located in the newly dug out basement. 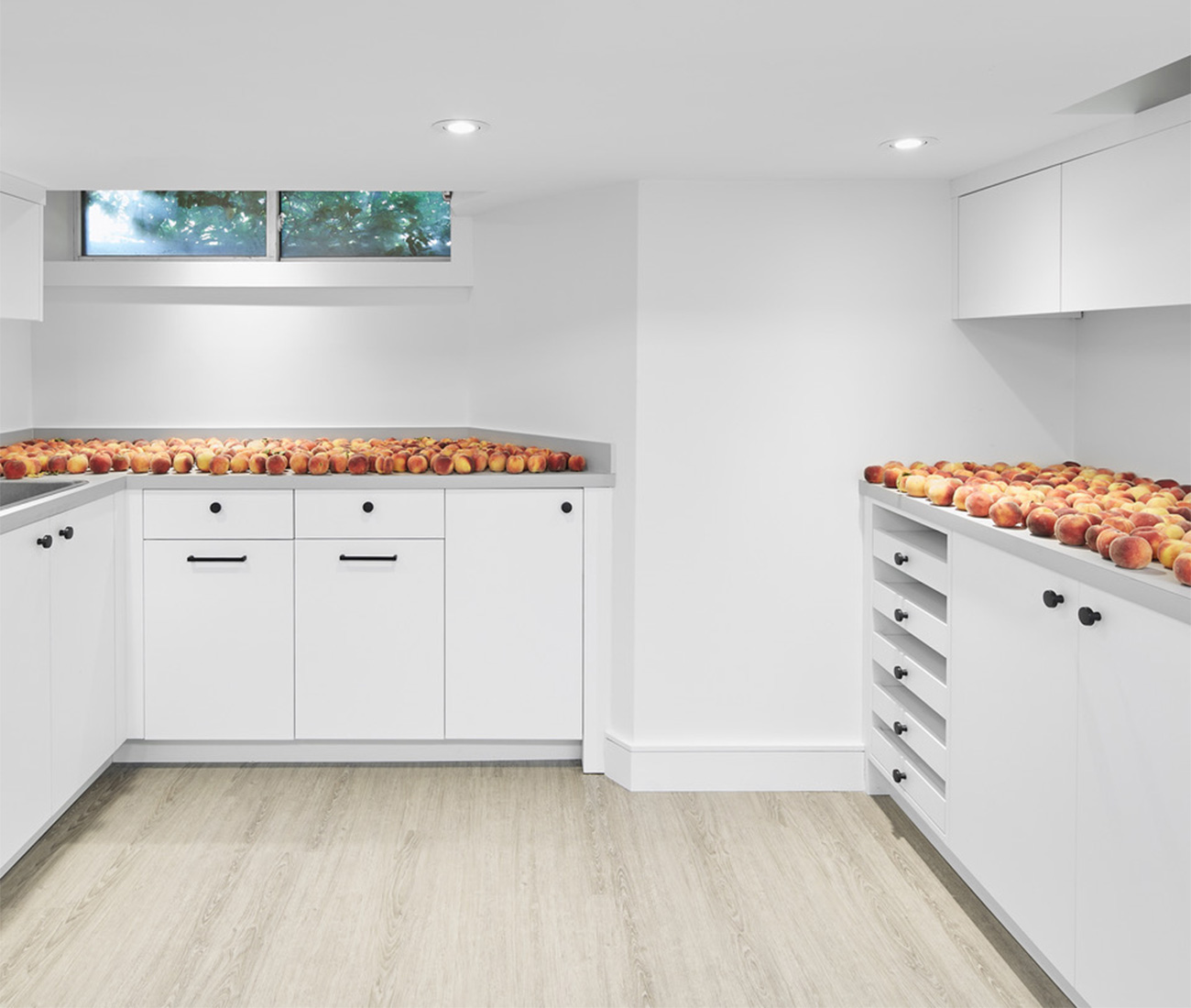 Also in the new basement is a workroom perfectly suited to preserving and canning fresh fruit. 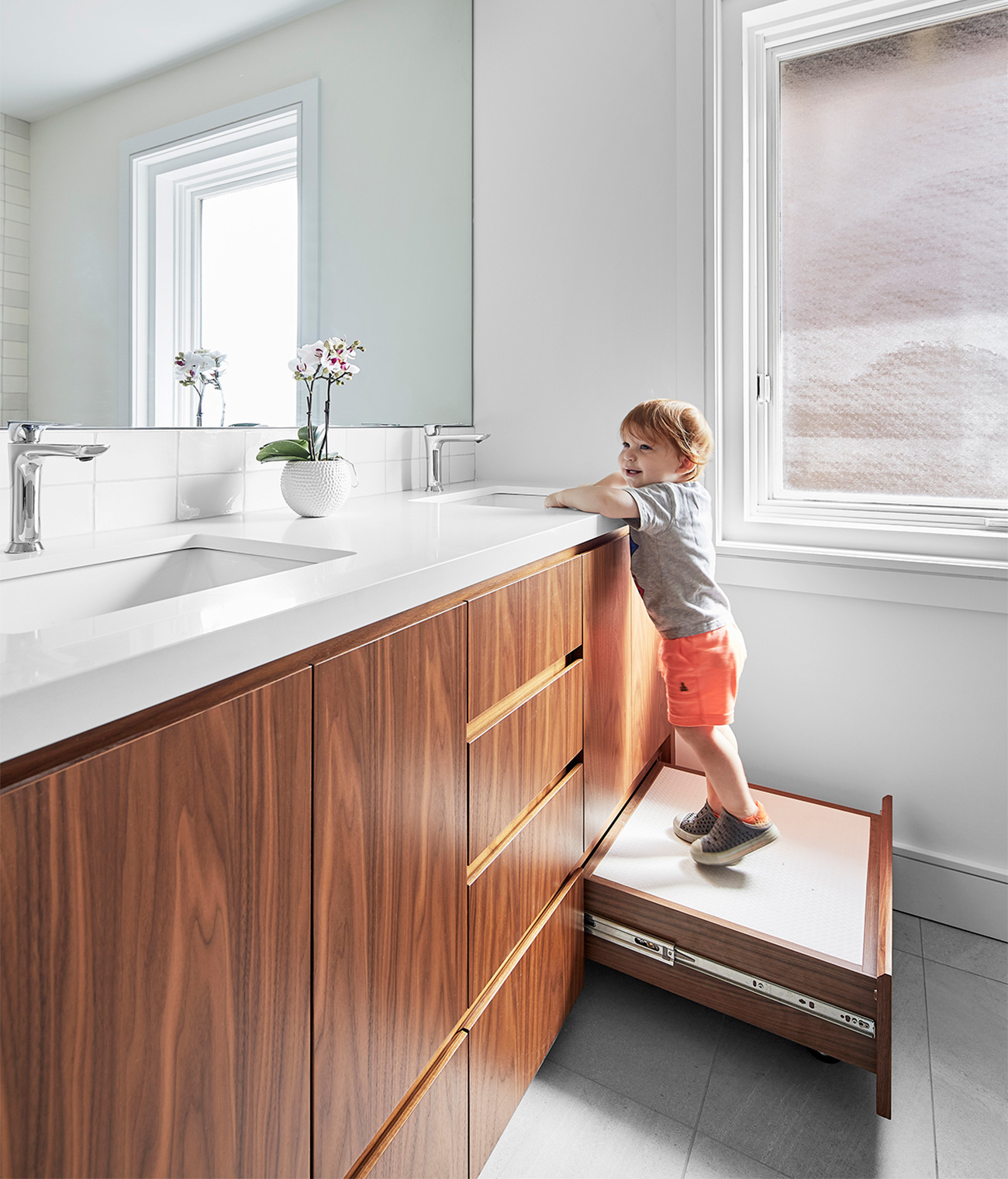 “The kitchen was a bunker, there was limited access to the backyard, and an awkward division in the family room made it hard to furnish.” These were just three problems the Lytton Park Tudor had. Oh, and much of the basement was but a glorified crawl space and the roof of the garage was too low. The laundry list of improvements was growing for the recently retired couple that lived there. Would it be wiser to downsize and move into a condo? For some, yes, but not for these outdoorsy hobbyists who can often be found chasing after their grandkids, who are in turn chasing after their dogs. Instead they called upon Toronto architect Joanne Myers for a much needed overhaul.

From the street the 1925 house is immaculate – phew, one less thing to do. But what Myers walked into was anything but. The addition at the back needed a serious rethink. Meant to be a family room, it was instead uninhabitable thanks to a huge fireplace placed in the middle. The kitchen was awkward and ran along the east side of the house. “The rooms weren’t dark,” Myers says of the ground floor, “but you could never get a clear view to the back, where they spend a lot of their time.” There was also no place to store their bikes and wipe down muddy dogs, nowhere to seat the extended family or process a harvest, and definitely not enough room in the garage to work on yet another passion project: restoring vintage cars.

Over the course of two years, Myers and contractor Casa Building Group brought the bygone home up to speed. Space was snatched from the first floor and given over to the garage whose roof was raised. Inside there is now more than enough space for hydraulics to lift and lower vintage cars, and better yet there is a new mudroom between the kitchen and front hallway big enough to store all manner of outerwear. A new staircase was added in the garage so that the newly dug up basement could not only be accessed but used for storage, dog-washing and even more food prep.

On the main floor, Myers reorganized the kitchen, situating it just off the now fireplace-free family room. Thanks to a large island, plenty of counter space and an extendable custom dining table, canning, preserving, cooking and hosting is a cinch, all of which can be done while enjoying views of the backyard through new sliding glass doors. And from the back – which was re-bricked so that it all matches – you can see clear through to the front. This is the perfect vantage point from which to take in the flow of the first floor, the contemporary upgrades and the Tudor’s original detailing. The home is now everything the hobbyists ever wanted. Project complete. JMARCH.CA 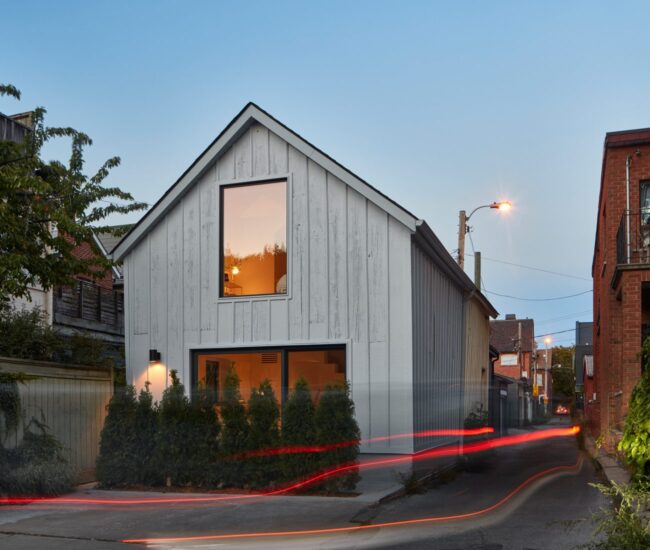