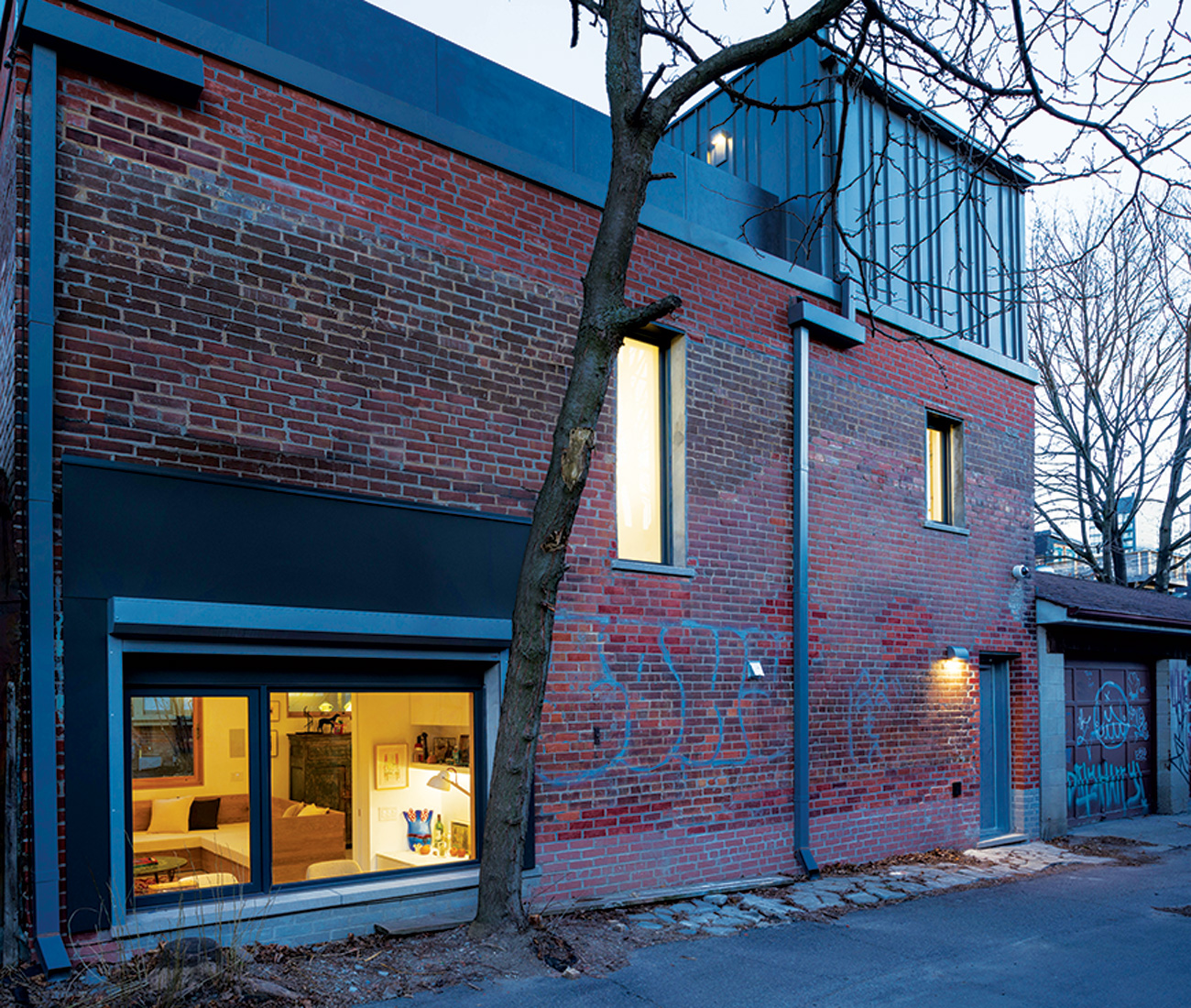 Original brick was reused to rebuild the structure, which is now topped with zinc roof flashing and eaves. A Nice For You shutter secures the office window at the push of a button. 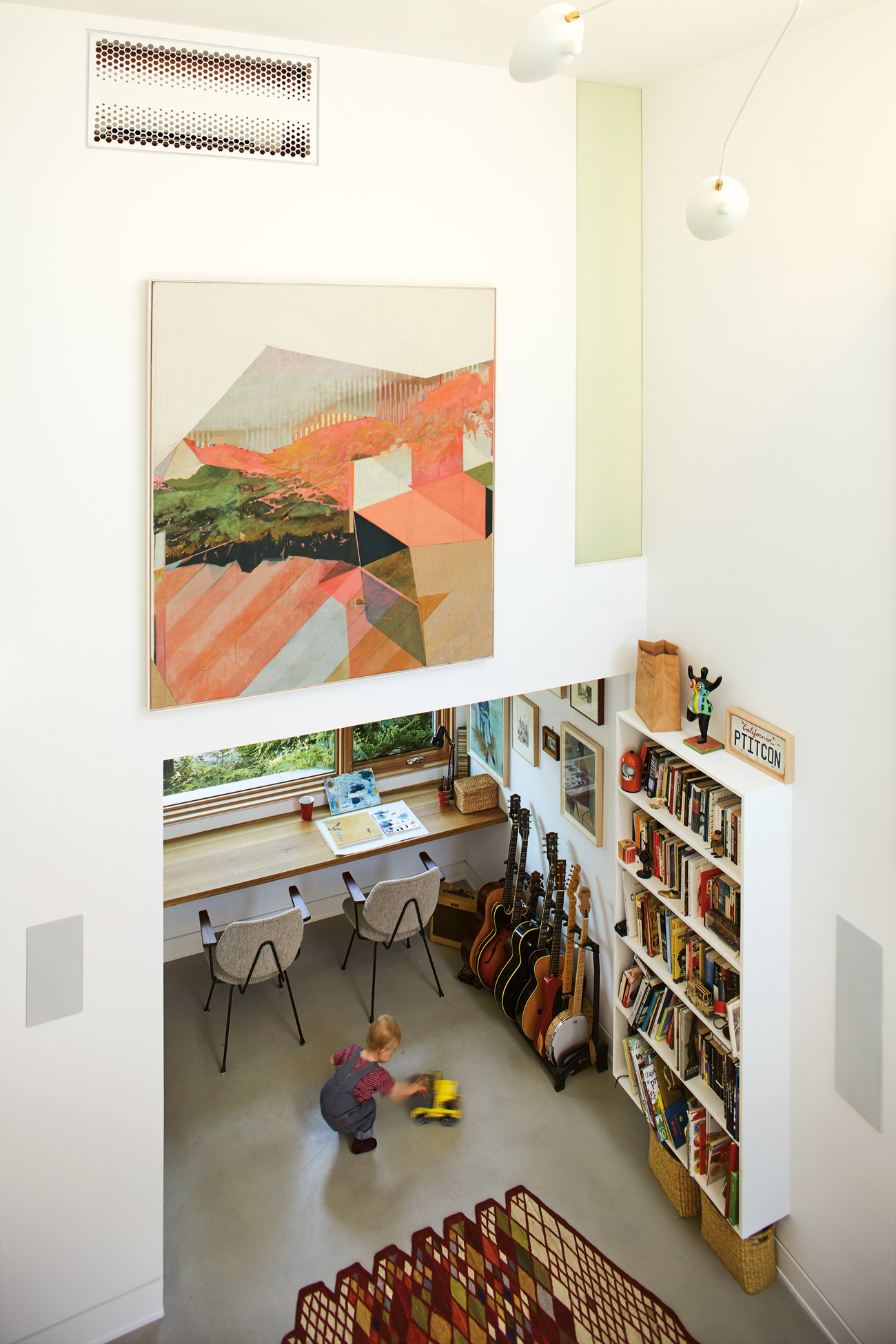 A pocket door closes the office/jam room off from the living room. Above the office, a vertical window illuminates the master bedroom’s walk-in closet. Painting by Andy Curlowe. 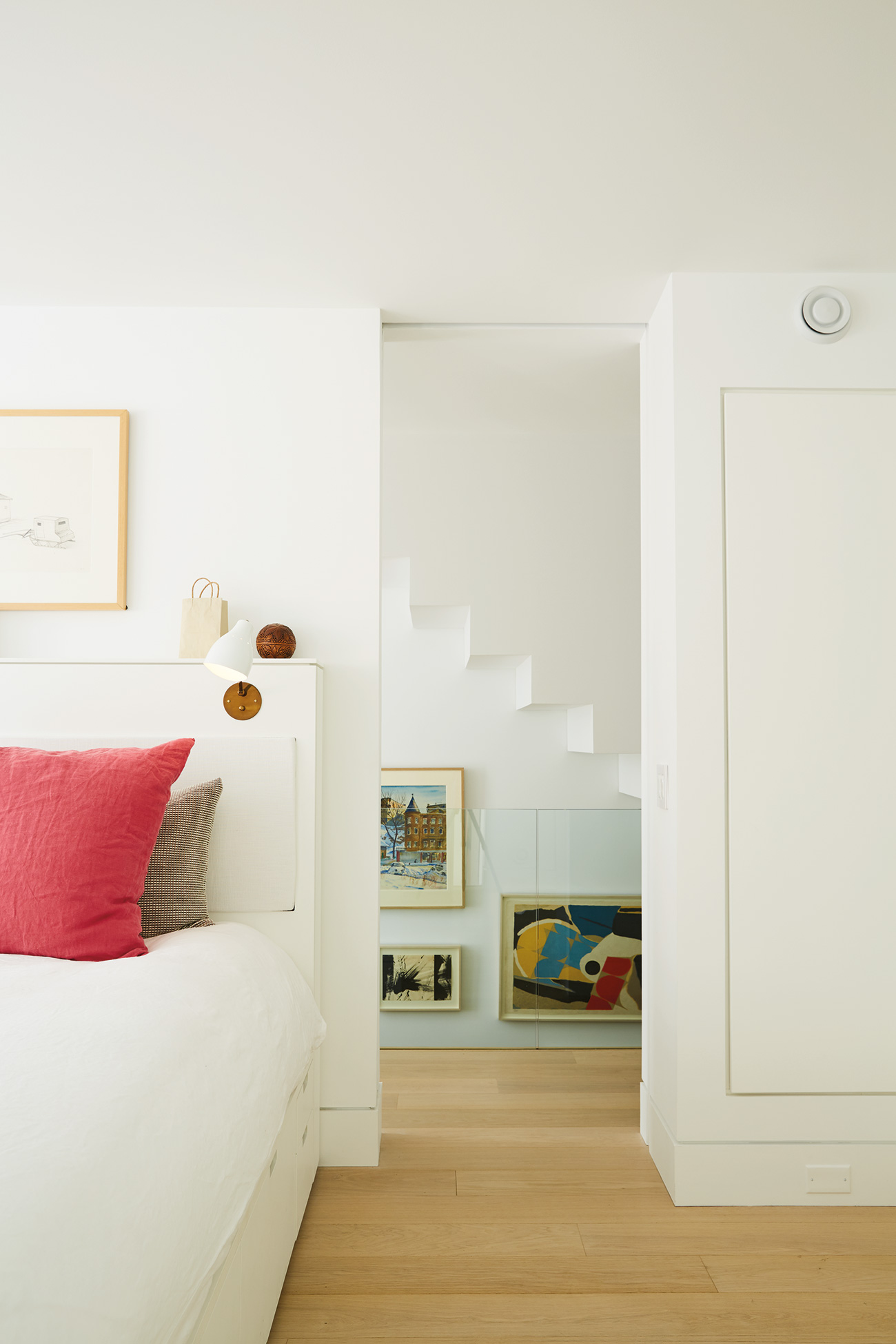 On the second floor, the master bedroom and its walk-in closet are bookended by a bathroom and the stairwell. Custom bed by O’Sullivan Millwork offers tons of storage; rift-cut white oak flooring throughout by Northern Wide Plank. 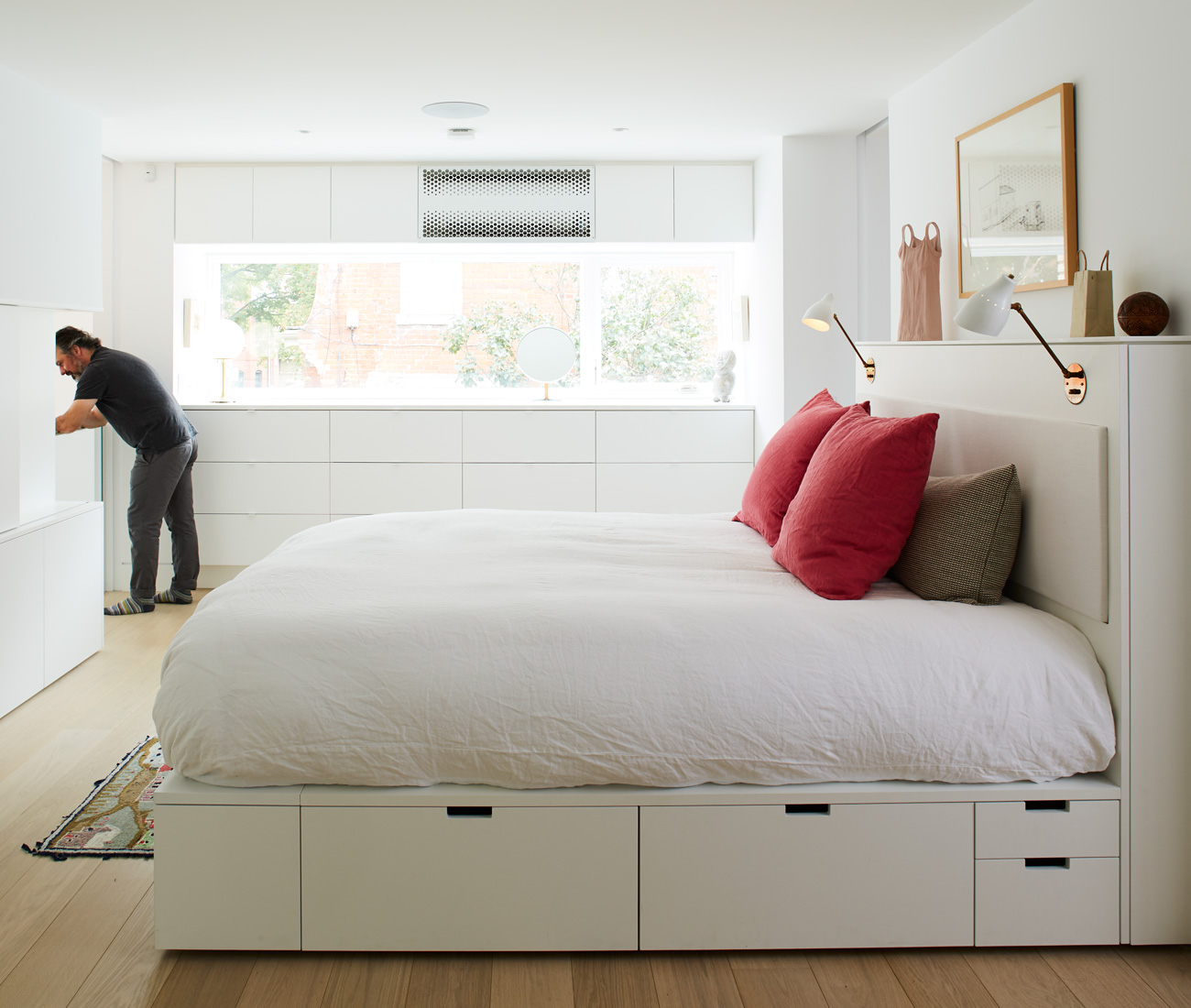 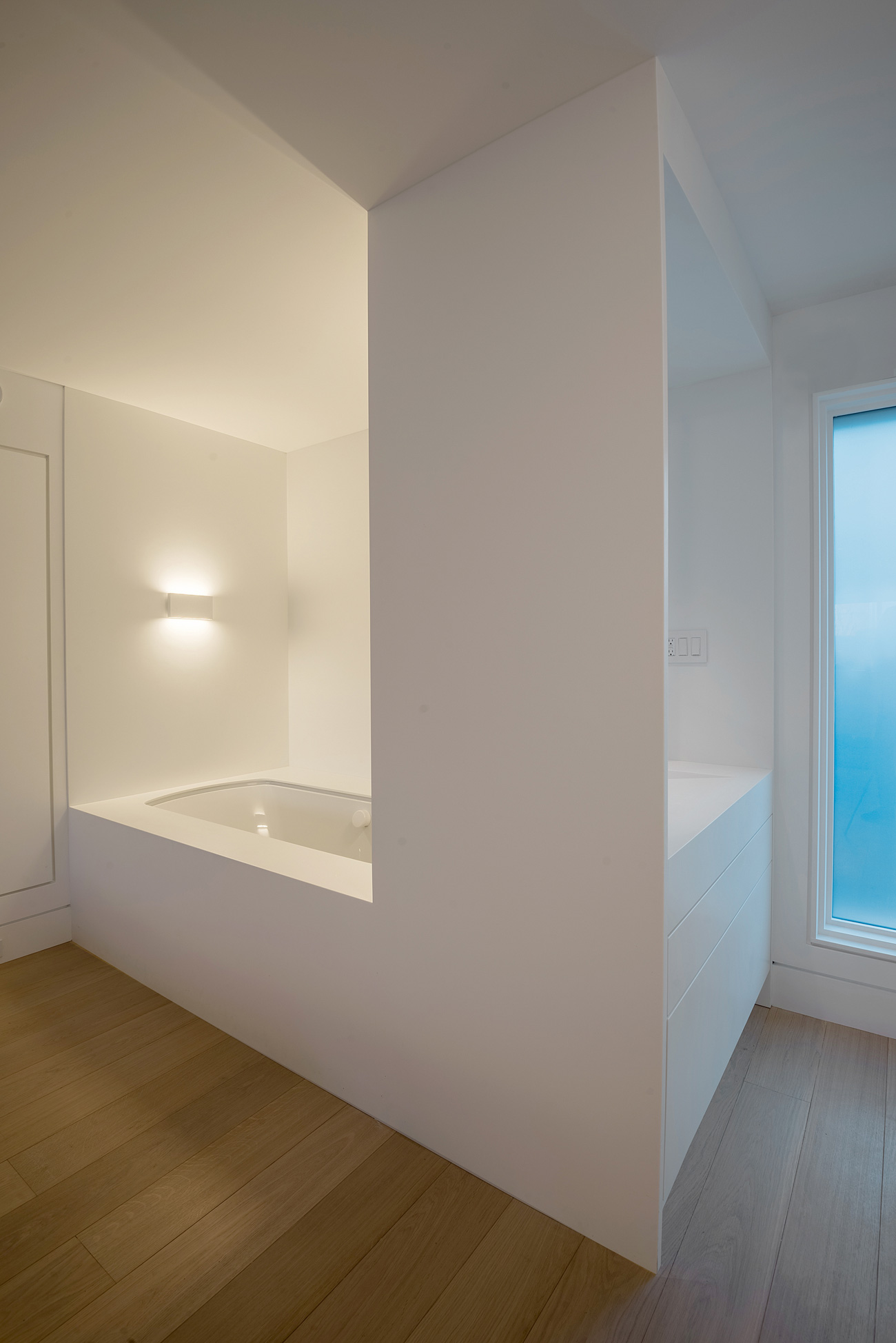 BainUltra tub in the master; all Corian work by Surface One. 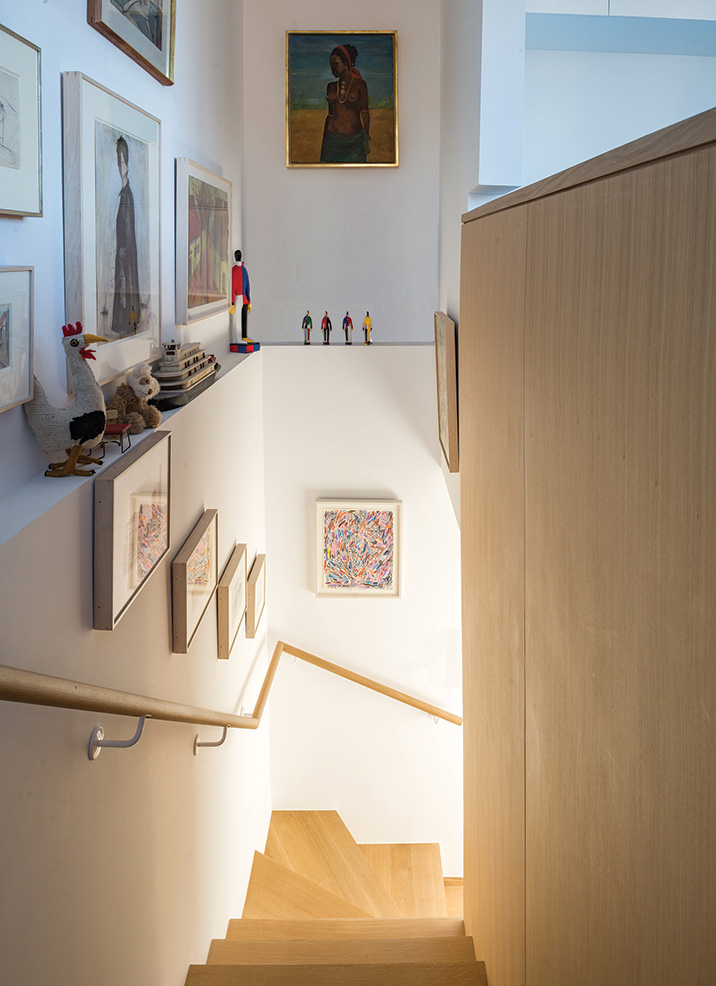 White oak handrails along the volumetric staircase are lit by recessed LEDs. 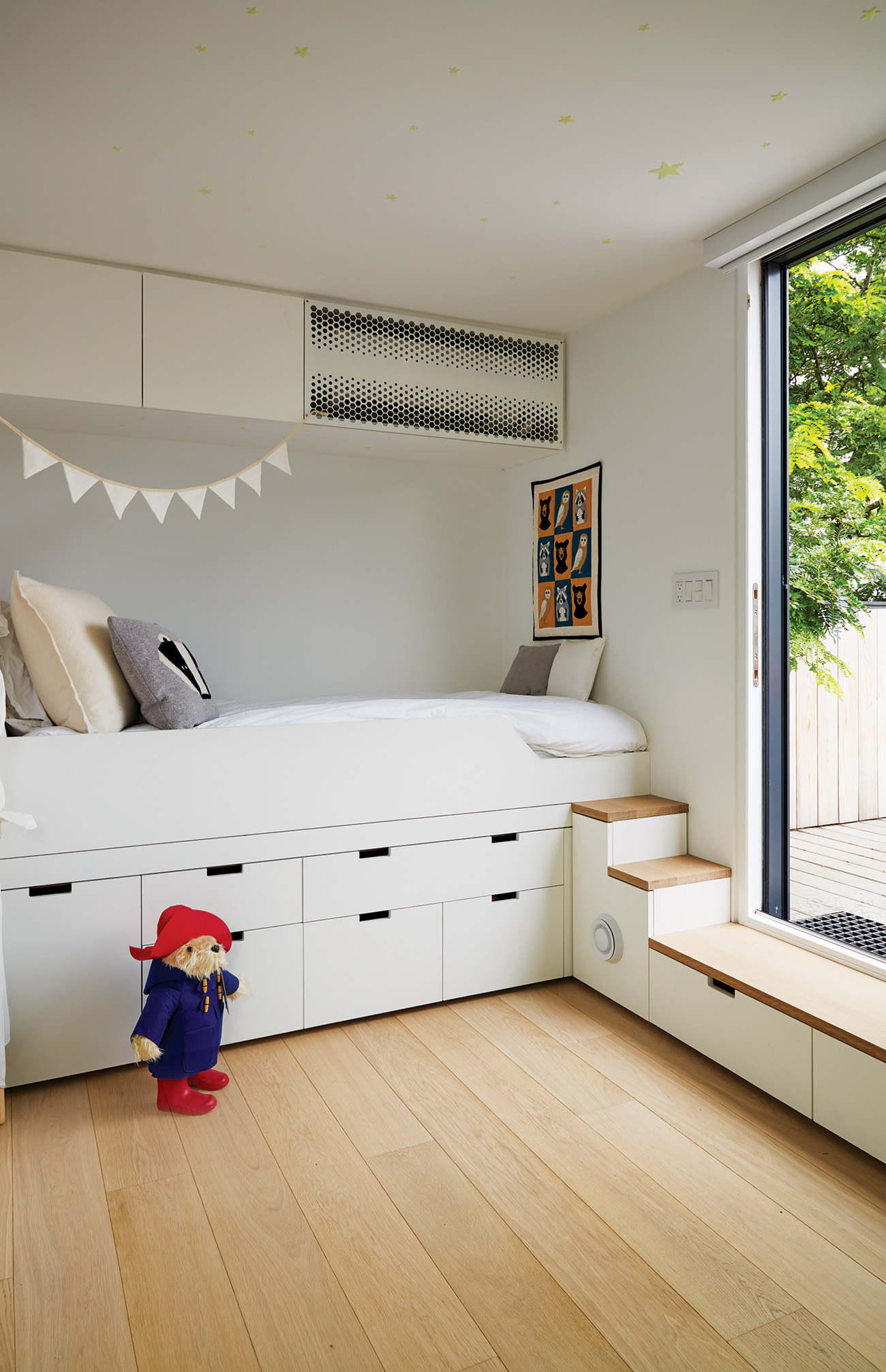 By Simon Lewsen
Photography by Naomi Finlay and Andrew Snow

Living small means rethinking conventional notions of luxury. Forget conspicuous consumption. What matters is quality of place. This Toronto Beaconsfield Village laneway house was built in the 1880s for horses, hay and carriage parts. Today, it’s a sophisticated custom home for a family of three. In 2014, Timothy Mitanidis, co-founder of Creative Union Network, was hired to retrofit the property, which his friends – two actors with a young son – had newly acquired.

Toronto laneway home units aren’t normally zoned for residential use, so Mitanidis pleaded his case with the city’s planning department and the Committee of Adjustments. The 10-by-8-metre building had been illegally renovated in the ’80s, and the bricks were disintegrating and the roof joists showed signs of rot. Mitanidis argued that, to make the property worth restoring, his clients would need permission to live there: “We said, ‘Listen, we want to fix this place up to maintain the city-scape, but we’re not going to turn it back into a coach house.’” In 2015, the city acquiesced, so long as Mitanidis didn’t alter the size or shape of the exterior structure.

The architect repointed chunks of the original brick wall, rebuilt the roof and dug out the floor to nearly a metre below grade. Inside, he created angular, prismatic rooms, which are illuminated by skylights and clerestory window bands. Every square inch counts. Relocating closets and keeping bathrooms as small as possible saved precious floor area for the priority zones, like the 45-square-metre kitchen-living room and the master bedroom above it. The finishes are unimposing: light concrete floors on the main level and white oak upstairs and on the kitchen cabinetry downstairs, which hides the utilities and equipment. “We’re not looking to show off the shiniest, biggest appliances you can find,” says Mitanidis.

Similarly, the furnishings were chosen – or, in most cases, built – with functionality in mind. Around the kitchen island are four Mario Bellini stools, which are sufficiently comfortable to sub in for dining chairs, since there’s no space for a table. The custom sectional houses LPs and a sound system, and upstairs, the master bed has built-in storage and pop-out nightstand drawers. Mitanidis placed the tub in the bedroom, a move that is both practical (“If you put it in the washroom, you lose too much valuable space,” he says) and decadent: Who doesn’t like watching TV in the bath?

To confront the density crisis, Toronto is considering following Vancouver’s lead and developing its laneways. Mitanidis shows not only that such a feat is possible but that it can be done in style. “Beautiful design always arises from constraints,” he says. Even if you can’t live large, you can still live well. CREATIVE-UNION.NET