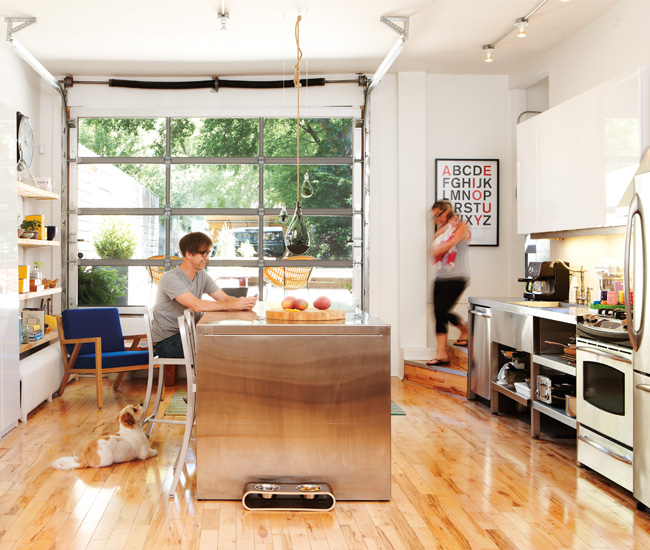 In good weather, the door opens up to the backyard patio’s barbecue and dining space. 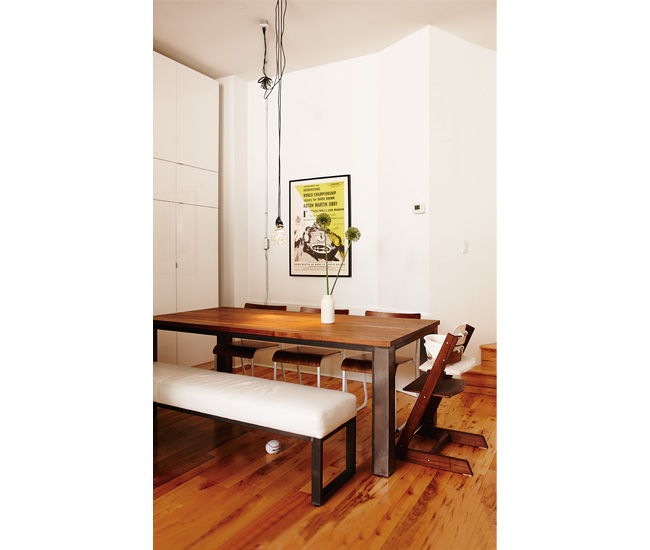 A walnut dining table is surrounded by a leather bench and “school” chairs, all from Stylegarage. Cabinets by Ikea, high chair from Ella + Elliot. 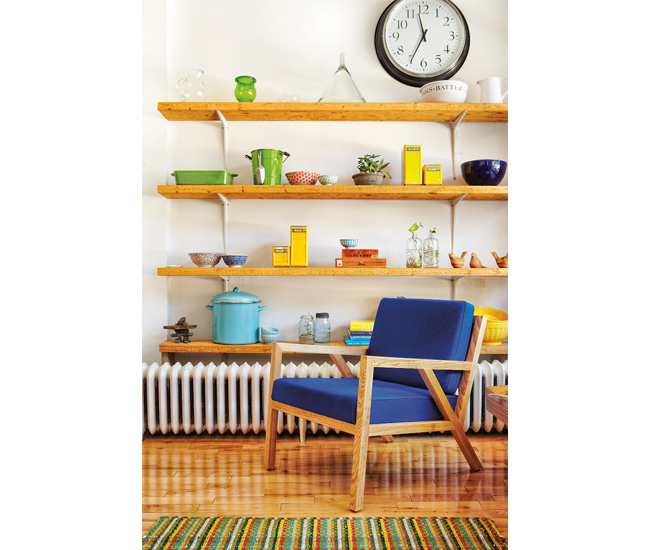 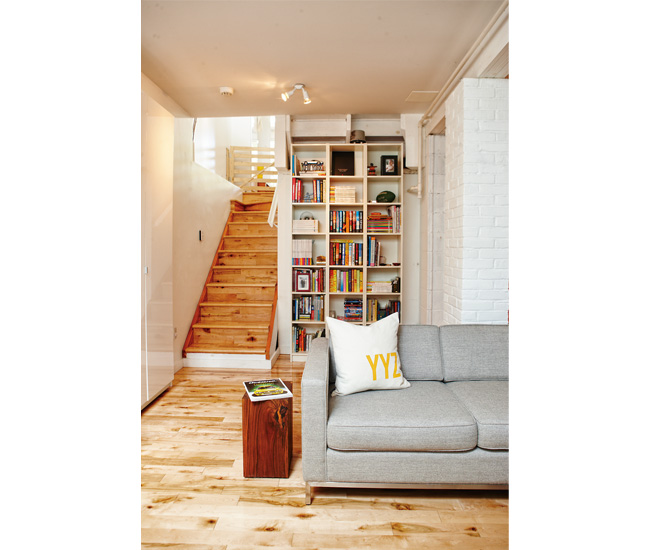 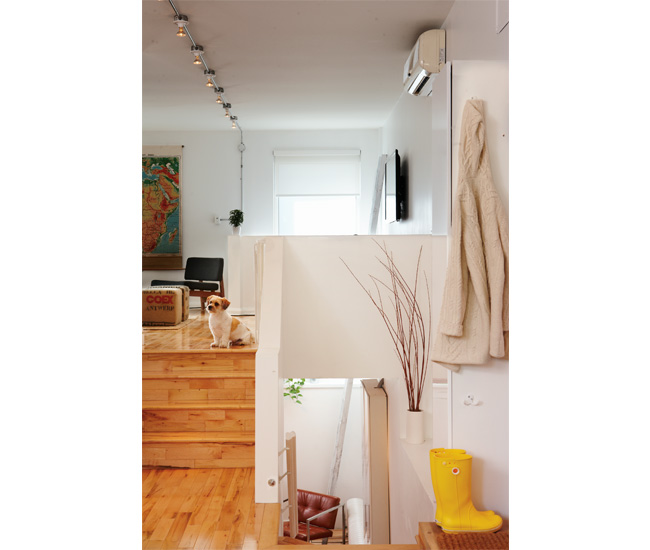 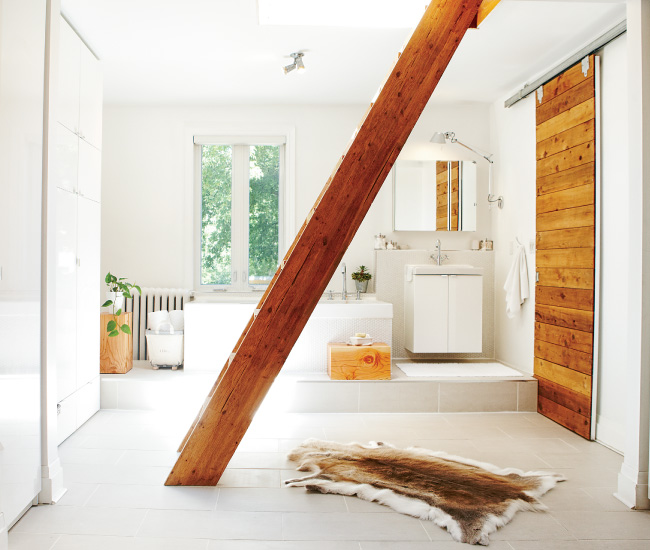 A pocket door in the master bathroom hides a water closet. The ladder leads to a rooftop patio. Ceramic tile from Olympia, tub by Neptune. 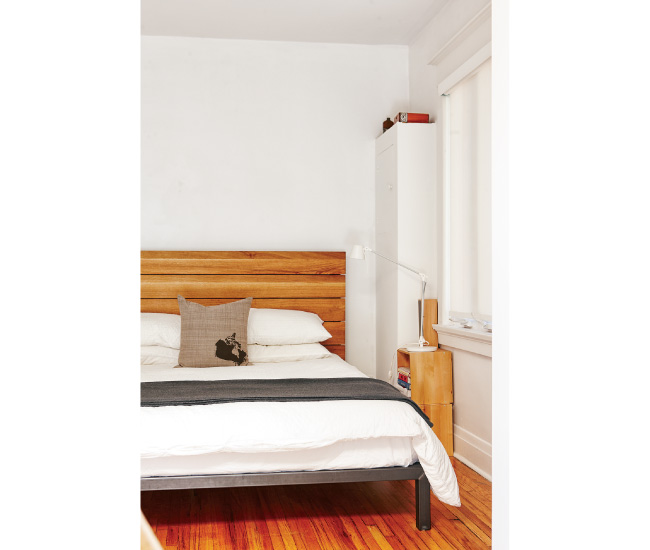 Trinity bed with a solid rift-cut oak headboard and pillow from Stylegarage. 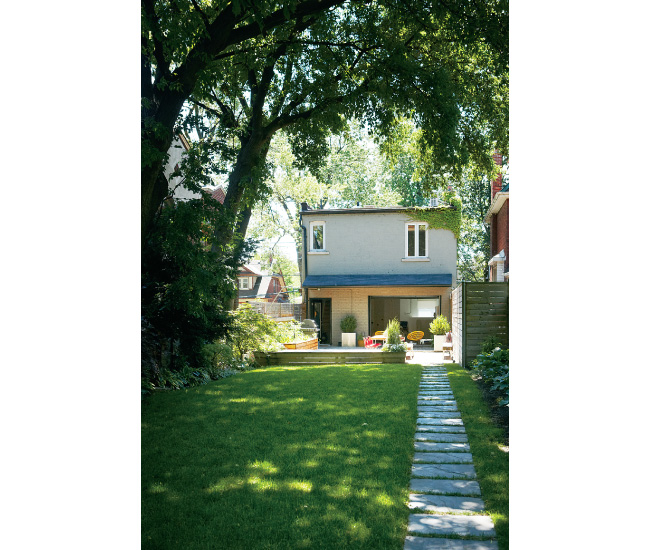 A view of the house from the backyard. 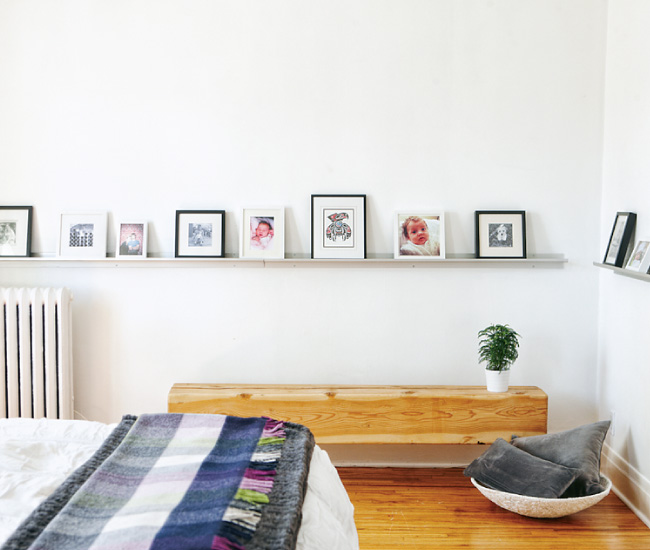 Picture rails span two walls in the guest bedroom. Bench is from Stylegarage, throw from Design Within Reach. 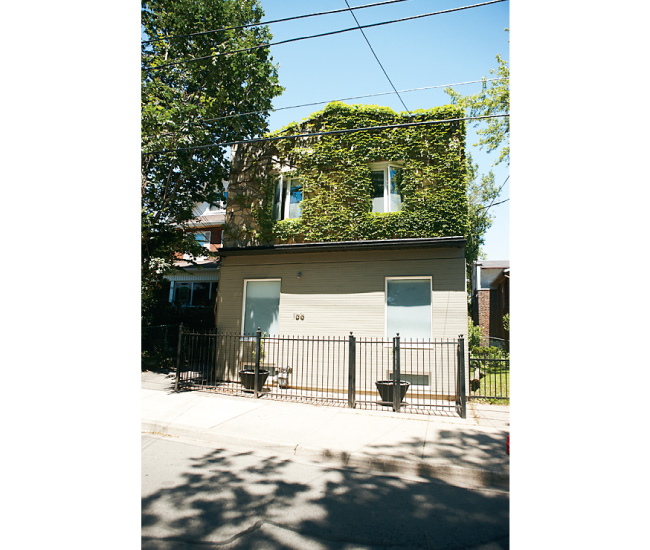 The vine covered, white-brick house in Mimico is a modest three-bedroom. Its no-fuss approach to modernity – art deco-style house numbers, frosted windows – is evident from the street. But when you step through the side entrance, there’s a glass panel garage door that rolls up into the ceiling, linking the kitchen to a lush, breezy garden.

The industrial, organic look might be familiar. It was David Podsiadlo and his wife Amanda Schuler, owners of the Queen West furniture store Stylegarage, who renovated the house from its former life as a dry goods store. Their first move was to install a functioning garage door in the central living space.

Today operation of that garage door is in the hands of Neil James, the managing partner of Stylegarage, who bought the 1930s structure from Podsiadlo last summer. “When we first moved in,” says James, “friends asked, ‘What are you guys going to add?’” To which he replied, “What would you add?”

Except for some vintage Formula One racing posters and Expo ’67 memorabilia, James has barely tinkered with the original vision. Chalet-style maple flooring – with every notch and knot exposed – covers the ground floor and the book- lined media room downstairs. Exposed conduit tubes power bare filaments and caged lamps inside and out to the patio. A vintage apple-picker ladder fills a light well – once occupied by a dumb waiter used to lift deliveries – visually connects the basement with the living room and the home to its retail past.

On the second floor, a wall between the master bedroom and main bathroom had been demolished in favour of one large suite. A rough-hewn door on rails conceals the water closet, and a ladder made of scaffolding planks leads up through a hatch. From a minimalist rooftop deck, James can see the city encroaching. Design does so exist outside the downtown core.

Originally published in our Fall 2012 issue.