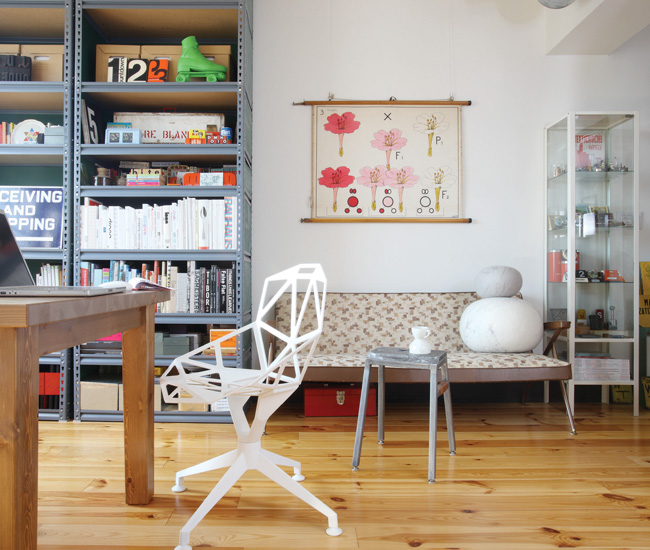 The couple’s home office is packed but hyper-organized. Deep shelves display their collections that include books with white spines. The desk chair comes from OneTwenty Modern and the rock pillows from Snob. The glass case to the right holds souvenirs from every city they have visited. 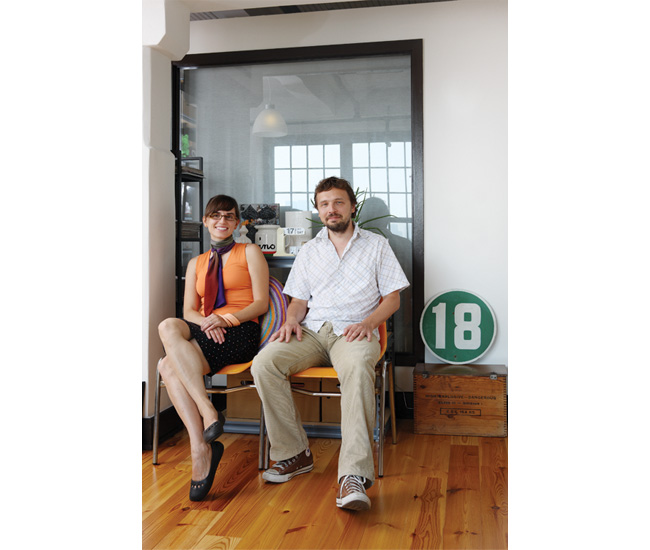 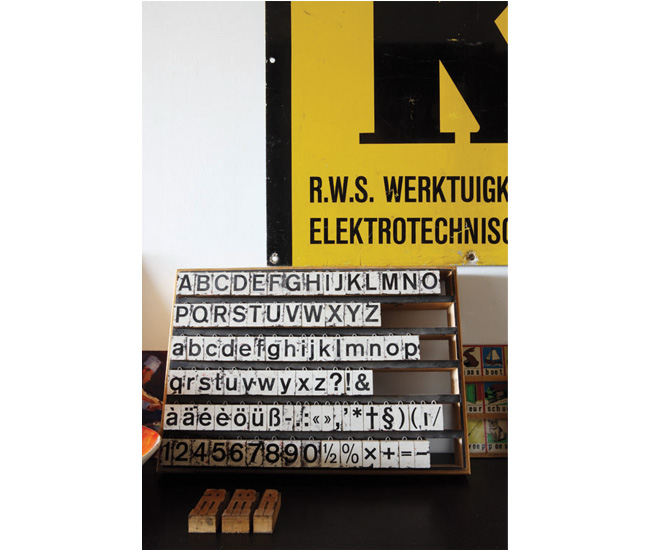 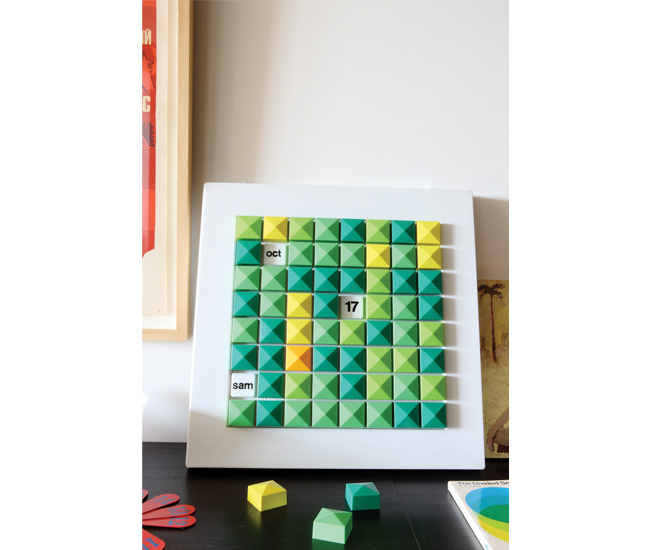 One of more than 100 perpetual calendars in their collection. Their plan is to stop buying them once they reach 365. 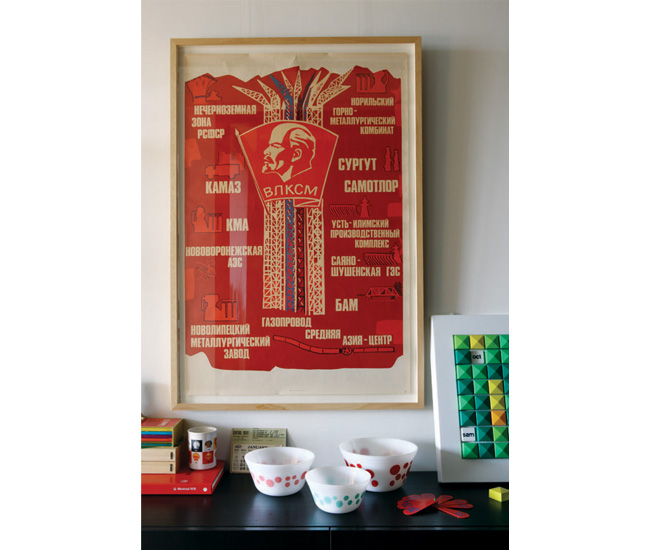 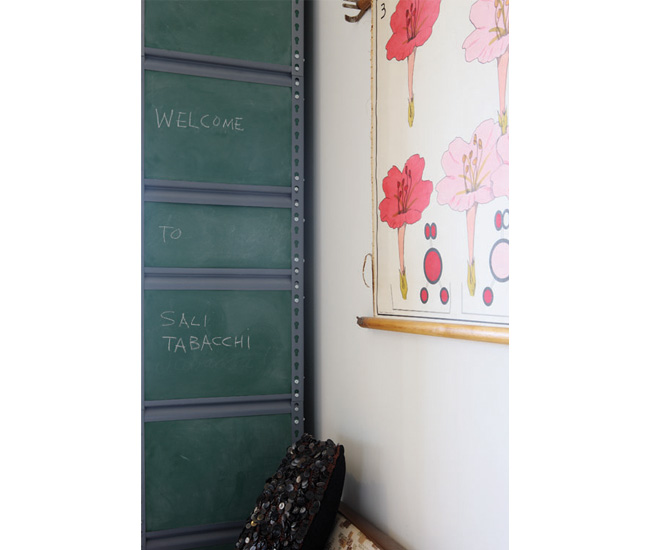 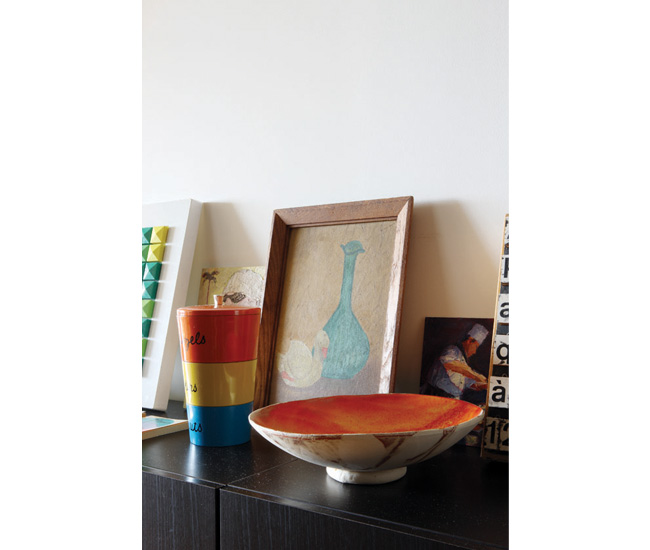 Almost everything they own has personal meaning. When they spotted the “ugly” duck-and-vase painting during a trip to Chicago, they both wanted it immediately. 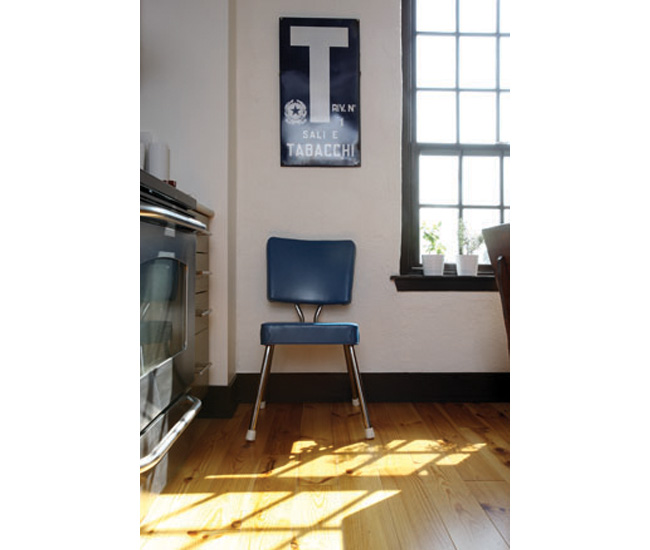 The Sali Tabacchi variety store sign, ubiquitous on the streets of Italy, inspired the couple as the perfect name for their eclectic design studio. 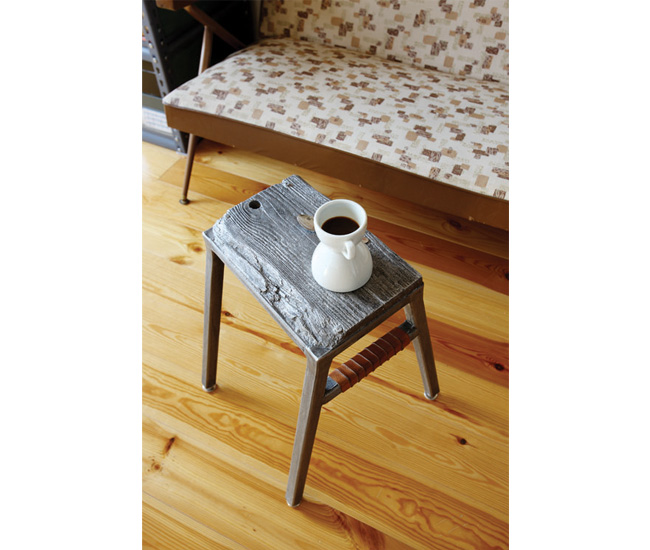 Cast aluminum Blind Stool by Castor, available at Ministry of the Interior. 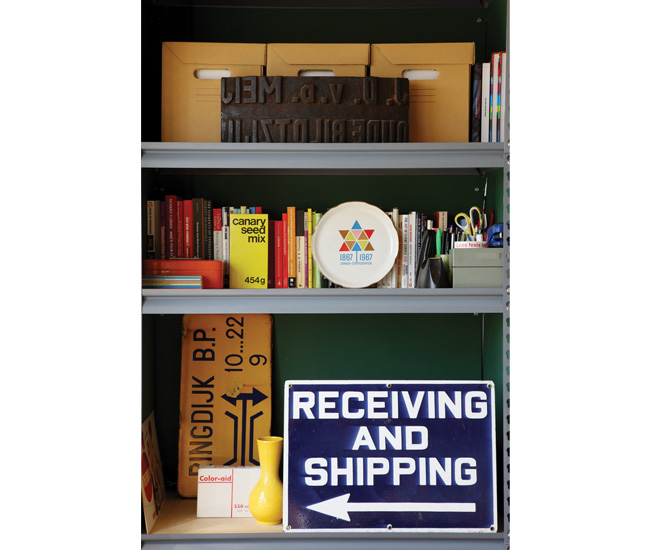 A farmer’s potato bag stamper from the Netherlands (top shelf) and a box of No Name bird seed. The receiving-shipping sign is from Smash. 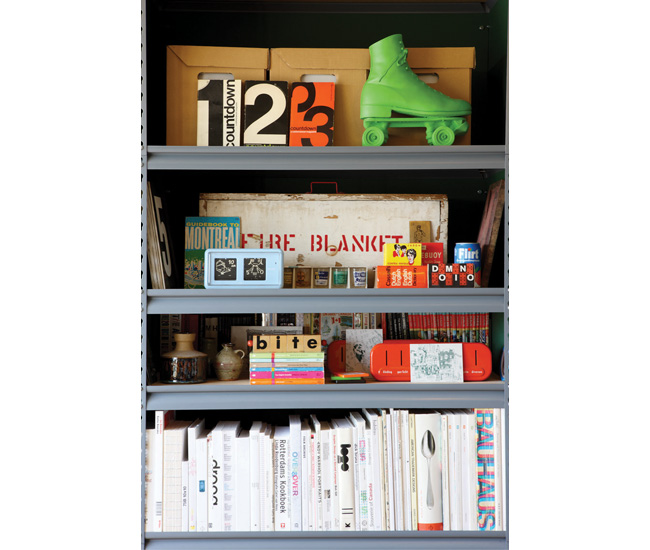 Green rollerskate by NY designer Harry Allen is available at Ministry of the Interior, and the baby blue flip clock by Yoshitomo Nara can be found at Magic Pony. 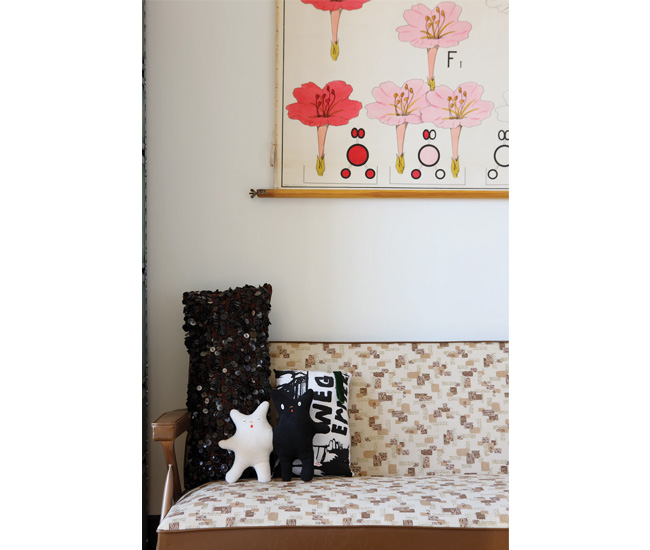 A pillow from Africa and made from buttons (from Snob) mixes easily with a graphic pillow by Amsterdam-based designer Bas Koster. 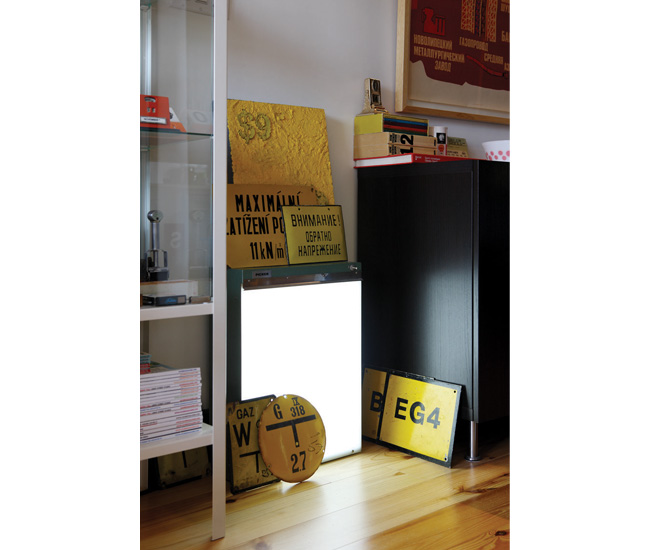 By grouping street and road signs in matching yellow hues, stuff on the floor looks like a still life, not clutter. 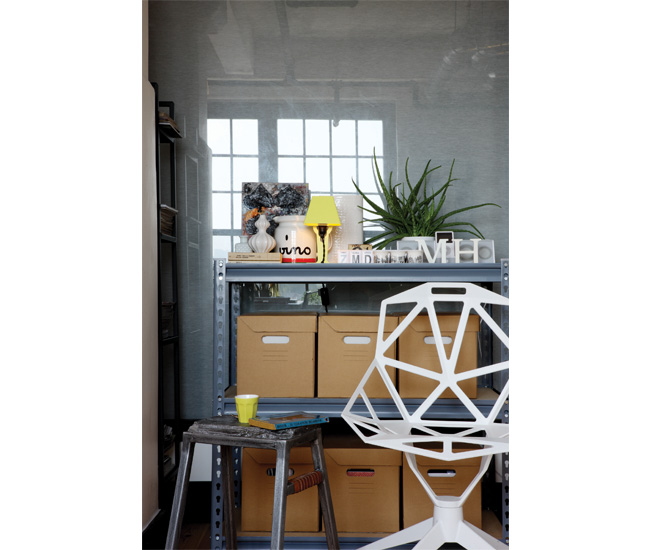 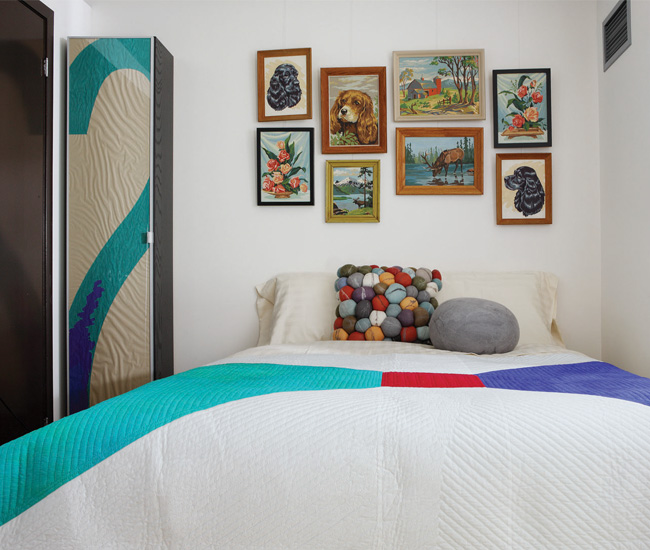 At their west-end home office, the duo behind Sali Tabacchi have a way of mixing business with pleasure

When graphic designers Melissa Agostino and Henry Tyminski search for inspiration, they don’t have to cast their eyes far. Their Beaconsfield Village loft, a mere 56 square metres in size, is packed with unusual collections, from metal road signs and wooden typesetting blocks to perpetual calendars and paint-by-number paintings – just about anything, in fact, that instructs, informs, and unexpectedly delights.

Above their workspace, which doubles as a dining room table, hangs the iconic Italian corner-store sign that gave their advertising and design firm, Sali Tabacchi, its name (they count among their clients Azure and this magazine). Not only do they admire the sign’s utilitarian look, but it also reflects the variety- store aesthetic of their work: “Sometimes our design can be crazy and colourful, and other times it’s very laid-back and black-and- white,” says Agostino.

Even their apartment resembles a store. Nearly every item on display has been creatively taken out of context: a church pew sits at the dining table; a vintage first-aid kit and a wooden dynamite box store knick- knacks and files; and a DIY metal shelving unit framed with a chalkboard – which they’ve dubbed Express Your Shelf – is both a focal point and a place to jot down erasable notes.

The couple expanded their quirky taste while living in Amsterdam and travelling around Europe to feed their obsession for found objets d’art. Among their prized possessions is a classroom poster demon- strating flower genetics (from Utrecht) and a vintage science set (Rotterdam). In St. Petersburg, they bought a perpetual calendar that looks like an oversized cigarette lighter – the first of 100-odd calendars they’ve amassed from around the world. They’re aiming for 365.

“Living in a small space and being a packrat is challenging,” admits Tyminski. “Sometimes you wonder what it would be like to be a minimalist – there should be a minimalist resort, or a cruise ship that has just white walls.” Likely, he’d still want to take home a souvenir, says Agostino. “Henry’s the first one to pick up a really tacky postcard or some cheesy statue. I’m a bit more on the pattern, colour, and illustrative side.”

Their interests mesh, though, when it comes to paint-by-numbers. Above the bed is an assortment of them, depicting baleful dogs and drab still lifes. Tyminski sees their banal charm as a lesson for designers in general: “I think sometimes we overcomplicate things.” The couple’s collecting habits also suggest, as the saying goes, small pleasures are best … especially if you have a lot of them.

Originally published in our Fall 2009 issue.