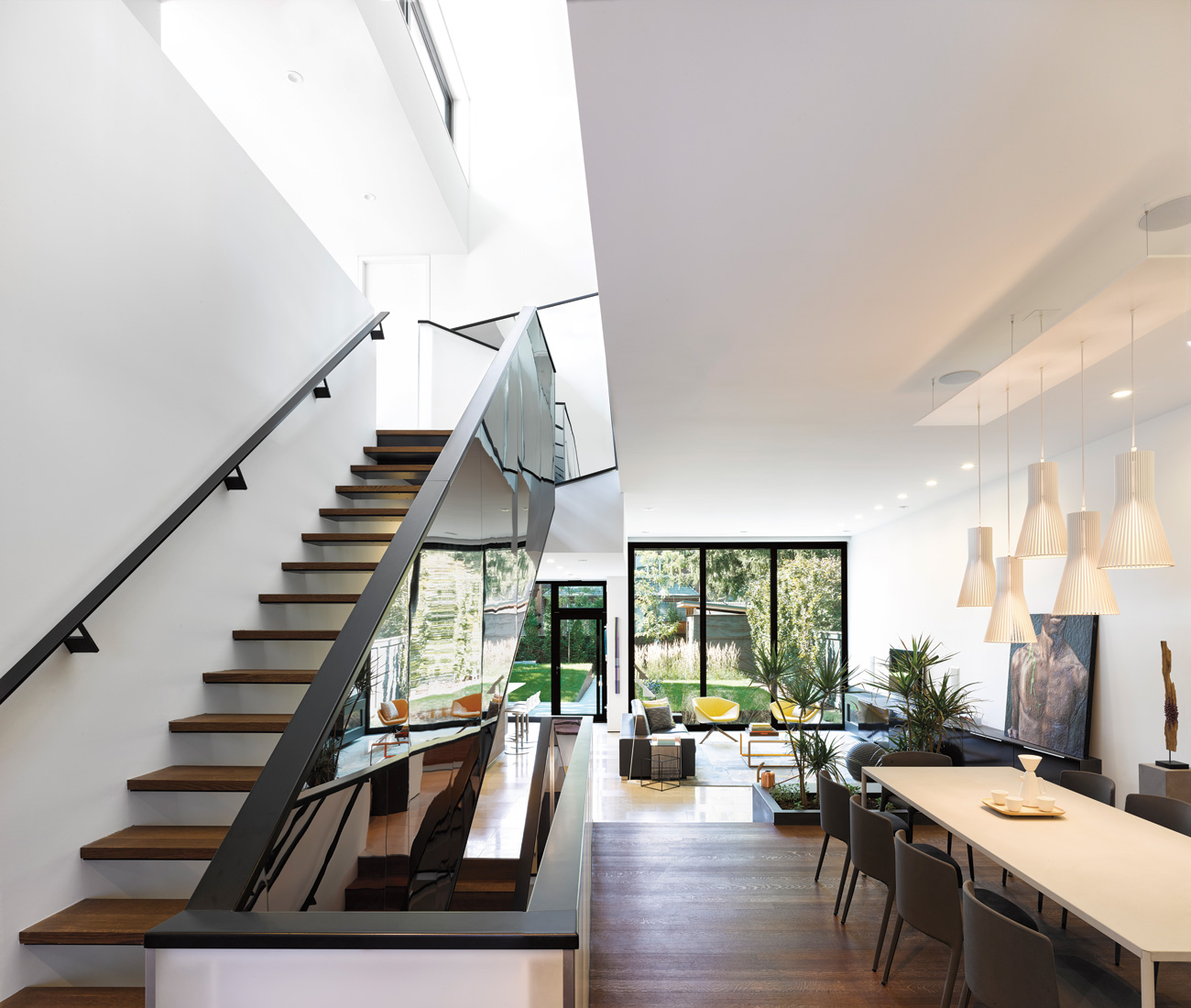 Five Secto pendants hang above the dining table and chairs by MDF Italia. A planter of tropical plants divides the dining area from a stepped-down living room and open kitchen. 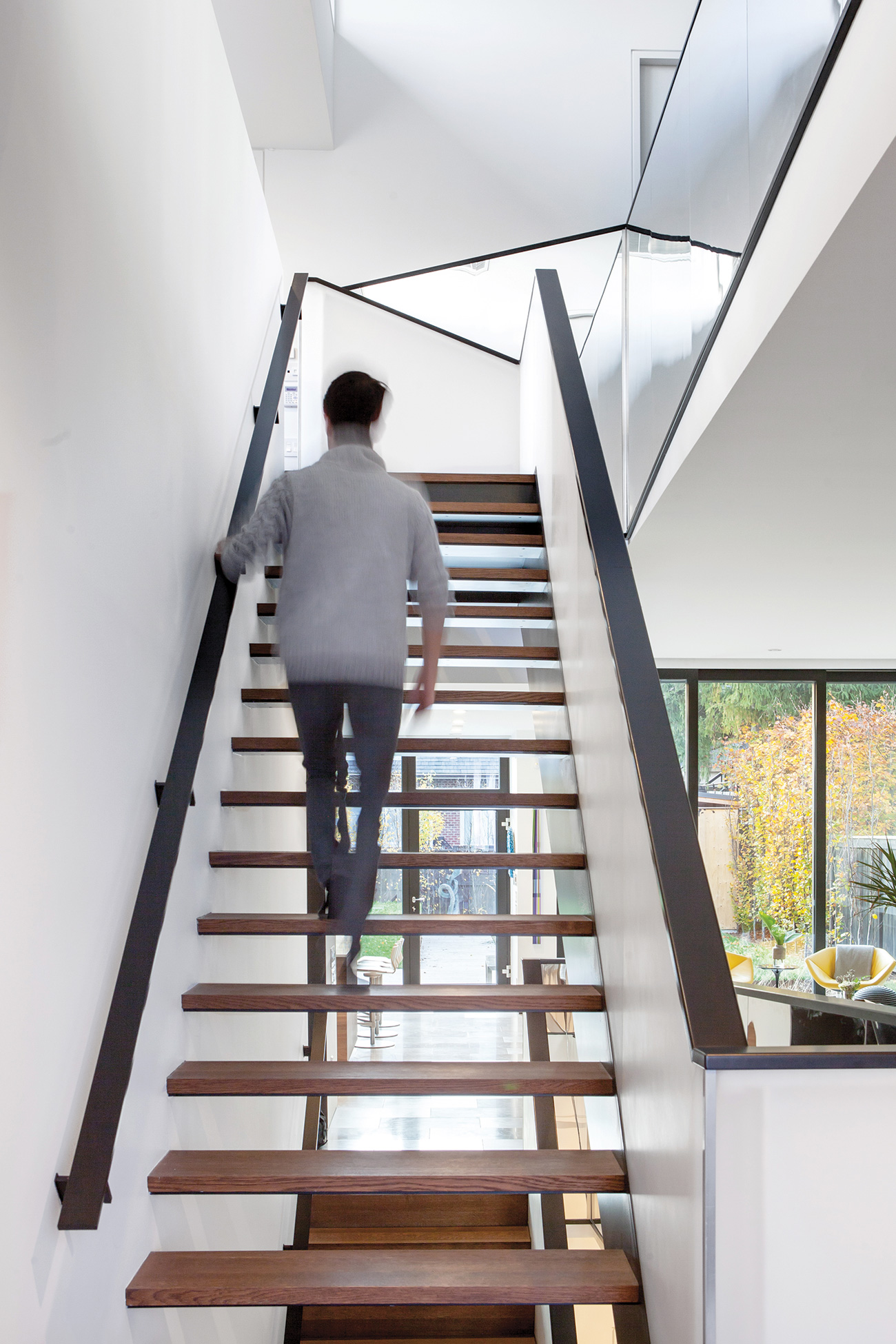 The open-tread staircase is at the centre of the house. 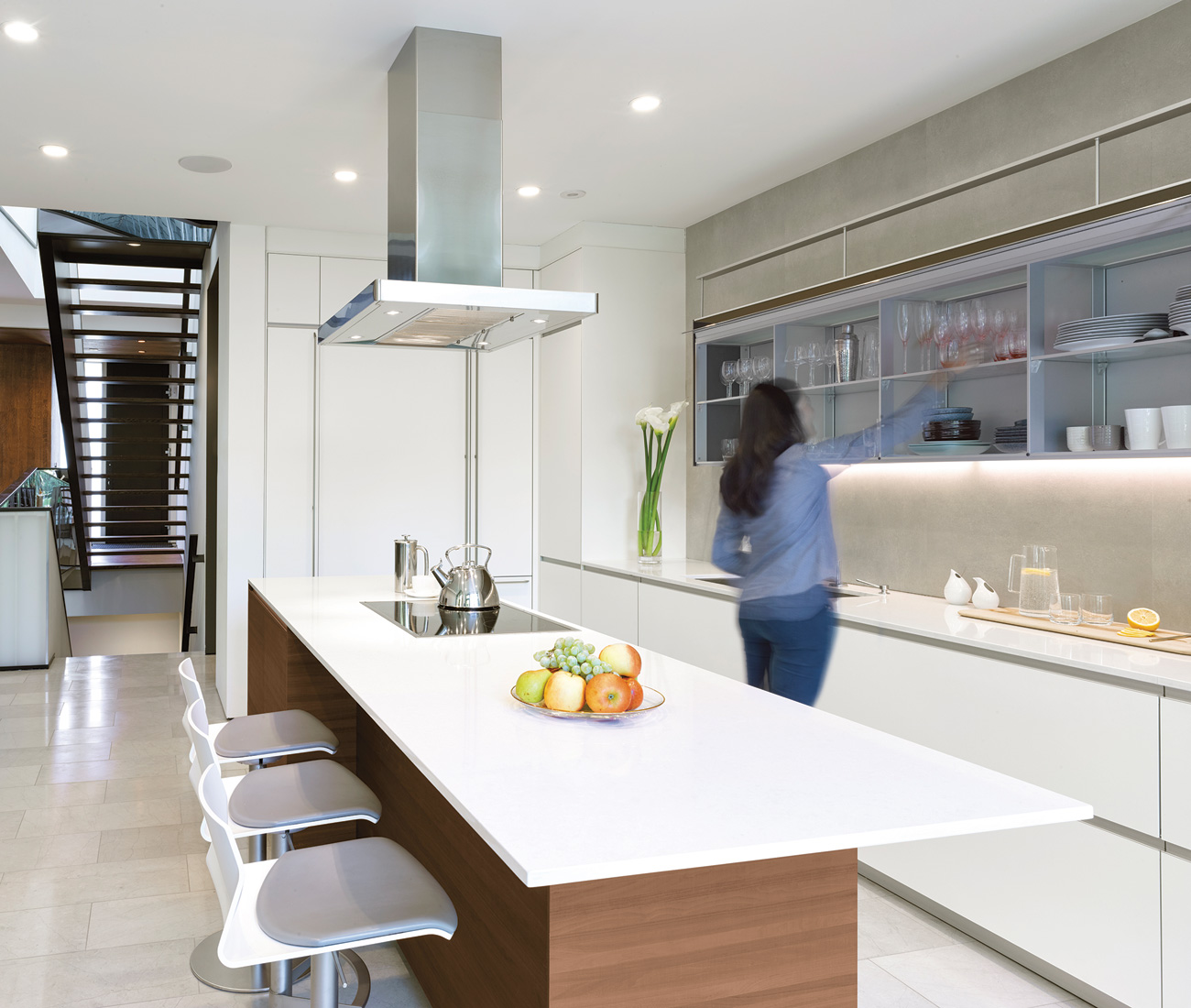 Architect Paul Raff obsesses over the sun. He pores over sun charts, uses computer modelling to observe how it behaves through the seasons, and creates time-lapse photographs to determine how light strikes his buildings at various times of the day. Were he a different kind of person, this fixation would seem almost spiritual, but Raff is a pragmatic designer.

He recently completed Kaleidoscope House, a Toronto residence that not only absorbs sunlight, but also repels, refracts, diffuses and channels it. The building, located in a tree-lined neighbourhood and designed for a family of four, is in some respects a typical contemporary home, with its split-level floors, oak-and-limestone material palette, and open-concept living area. But the fenestration is highly irregular. In many of his residential buildings, Raff experiments with windows, using crenellated or layered glass, or opting for lopsided arrangements that favour some walls and neglect others. The second floor of Kaleidoscope House has two clerestory window bands that face south: one running along the mezzanine just above eye level and a second in a vaulted ceiling atop the stairwell. The north-facing wall is almost windowless except for a small portal at the back of the laundry room.

This set-up is utilitarian, not stylistic. During the Canadian winter, the sun rises in the southeast and sets in the southwest; in summertime, it makes the same east-to-west journey but at a more northward tilt. Raff maximizes the natural light in the gloomy winters and limits it during the summer by setting windows primarily along the southern wall. “When you look at a house or any building in this climate, you should be able to tell which way is north or south,” he says. The Kaleidoscope House also has east- and west-facing windows — allowing views onto the street and backyard — though, here, the light is controlled by way of blinds, overhangs and backyard tree cover.

The centrepiece of the house, and what earned it its name, is the open-tread stairwell adorned with a mirrored balustrade. The shiny surface that extends from the basement to the second floor has an art deco glamour about it, but its elegance is also practical; the mirrors reflect light from the mezzanine and diffuse it throughout the house. “It isn’t always true that more light is better,” says Raff. “What matters is the quality of light.”

He describes the majority of Toronto buildings as “energy pigs.” Poorly lit and improperly insulated, most are made livable through extensive cooling and heating systems. Here, by channelling sunlight judiciously, the house reduces energy consumption significantly, with air conditioning an occasional peak-summer indulgence. The home is further future-proofed by keeping advancements in sustainability and technology in mind. The garage, for instance, has a port for electric cars, and the interior wiring is sheathed in outsized conduit chases, anticipating the advent of smart electrical systems that will require thick bundles of cables.

Raff designed the living areas in order to take advantage of the light quality. The furnishings and built-ins evoke themes of luminosity, fluidity and integration with nature. The firm created millwork pieces that demarcate nooks and hutches without cutting them off from the light flow. And at the centre of the downstairs living area, Raff set a rectangular planter containing three dracaenas, leafy shrubs native to Africa, South Asia and Central America. Normally in a Canadian home it would be impossible to grow tropical species far from the nearest window, but the decision bespeaks a sense of confidence. I can get away with this, Raff seems to say. The light here is just that good. PAULRAFFSTUDIO.COM