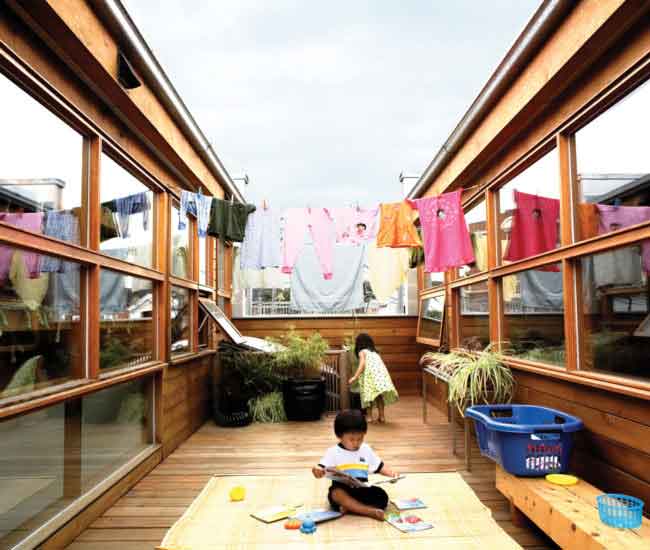 With Courtyard House, Studio Junction defies conventional wisdom about how residential architecture in the North should look — and feel

Modern architects have always admired courtyard houses, but when the concept was first proposed in Canada back in the 1960s, it was generally dismissed as unsuitable for a northern climate. So when Peter Tan and Christine Ho Ping Kong resolved to build a courtyard house for themselves, they took inspiration from their travels throughout southern Europe and Asia, where walled-in spaces are far more common.

Both grads of U of T s architecture school, the couple started off by purchasing an unlikely property: a bunker-like concrete warehouse on a laneway in the west end’s Junction. From design to construction, the project took six years with a schedule squeezed between the couple’s day jobs and the birth of their two children. Now complete, the two-storey family home perfectly demonstrates just how appealing it is to have a bit of outdoors inside.

A cedar-lined recessed entry, visible from the laneway, is the only hint of the transformation found inside. The entrance opens into the home office, where a dramatic double-height space is lit from above by clerestory windows and furnished with a single wall-mounted desk nine metres long. Around the corner are the kitchen, dining and living spaces, which face onto the courtyard and a small, detached studio beyond. The effect is almost magical. A fully glazed wall eliminates any visual barrier between inside and out, even in winter, and allows plenty of natural light to seep into the house.

Enclosed by concrete walls that reach two metres, the courtyard is adorned with very few obstructions, making it both a versatile space for large gatherings and a safe room for the kids. Tan planted a single Japanese maple at one side, and there is a tiny water feature with bamboo, barely a half-metre square. Paved in sandstone, its light grey surface matches the radiant-heated concrete floors inside. The continuity declares the whole ground floor as exterior space, especially when the sliding glass doors are open. In fact, the family removes outdoor footwear only to go upstairs, storing their shoes in drawers hidden in each rise of the stair.

Upstairs is no less spatially ambitious. A hallway divides two and a half bedrooms on one side from a luxurious sun-filled bathroom and laundry area on the other. The surprise is the narrow terrace off the bathroom: it’s like a second courtyard and offers views from the shower and a private place to read or hang the laundry. Windows on either side usher natural light into the office downstairs, and an ingeniously hidden skylight illuminates the kitchen.

Almost every surface throughout the house is covered in wood, contributing to the general calm ambience the home seems to exude. Tan, an expert woodworker, clad the walls with variegated teak plywood. Mahogany was used on the ceilings on the main floor and birch plywood on the second. Hand-built window frames and wall panelling upstairs were made from Douglas fir salvaged from the garage’s wooden rafters. On both floors, almost every wall hides floor-to-ceiling cupboard space, ideal for stowing away clutter and reducing the need for furniture.

Even though the courtyard was designed to give the family privacy, they regularly use it for large family gatherings and communal art exhibitions. The house is actually far more open than any detached house could be, and it s also more closely attuned to the climate. “We move about the house through the day according to the light,” says Ho Ping Kong, ”and in the courtyard, we watch the seasons pass.”

Originally published in our Spring 2008 issue as Living Outside the Box.