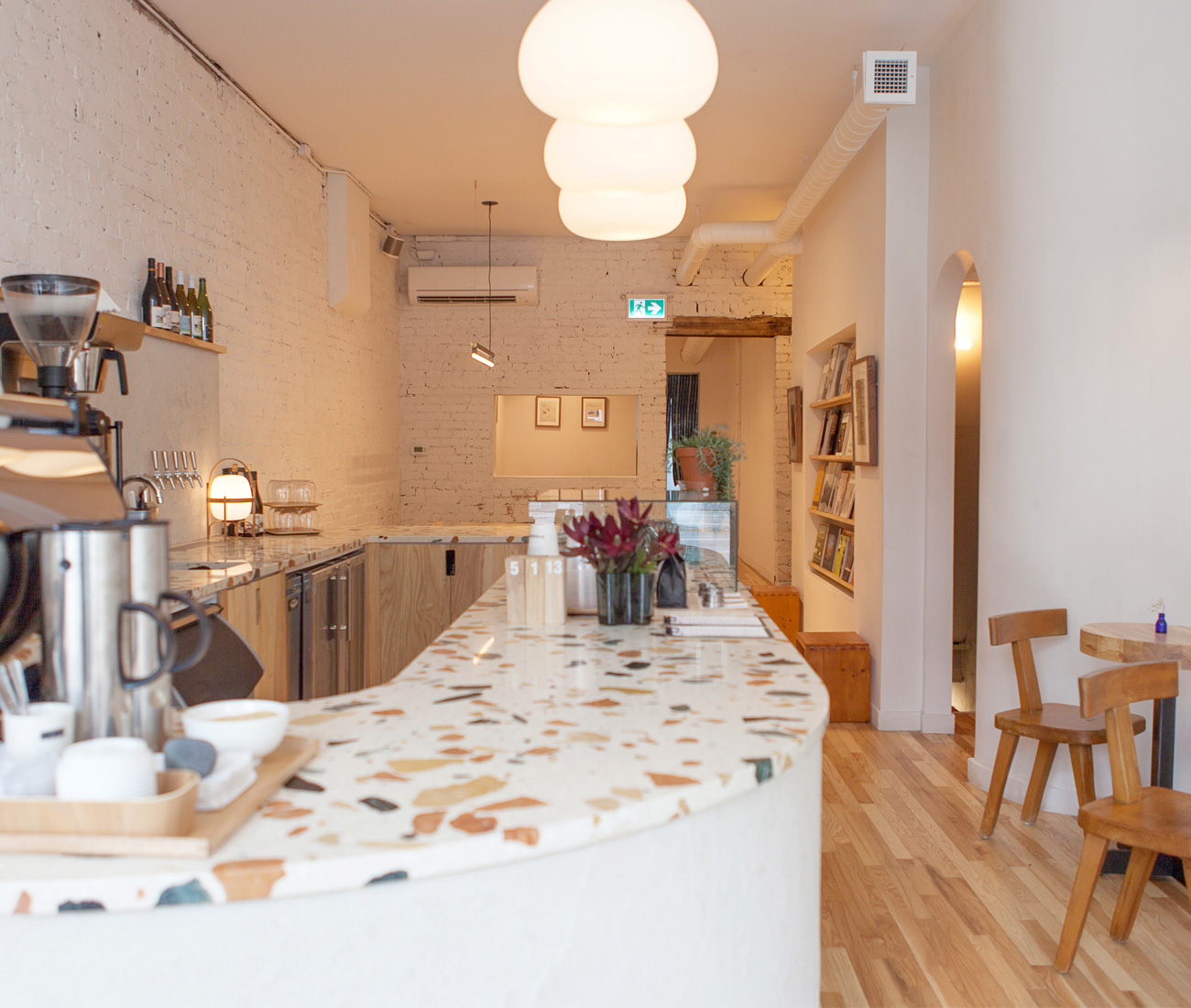 With the help of Montreal architects Atelier Barda, a design-obsessed couple prove that you can “dream big on a small budget” at Synonym Shop

A cafe, wine bar and bookshop on James Street North in Hamilton may sound like an unlikely place to find a curvilinear slab of British designer Max Lamb’s marmoreal, composed of four distinctive Veronese marbles, but here it is. And the more you stare at Synonym Shop’s hypnotic countertop (ideally on a sunny autumn day, as we did) the more it makes perfect sense. 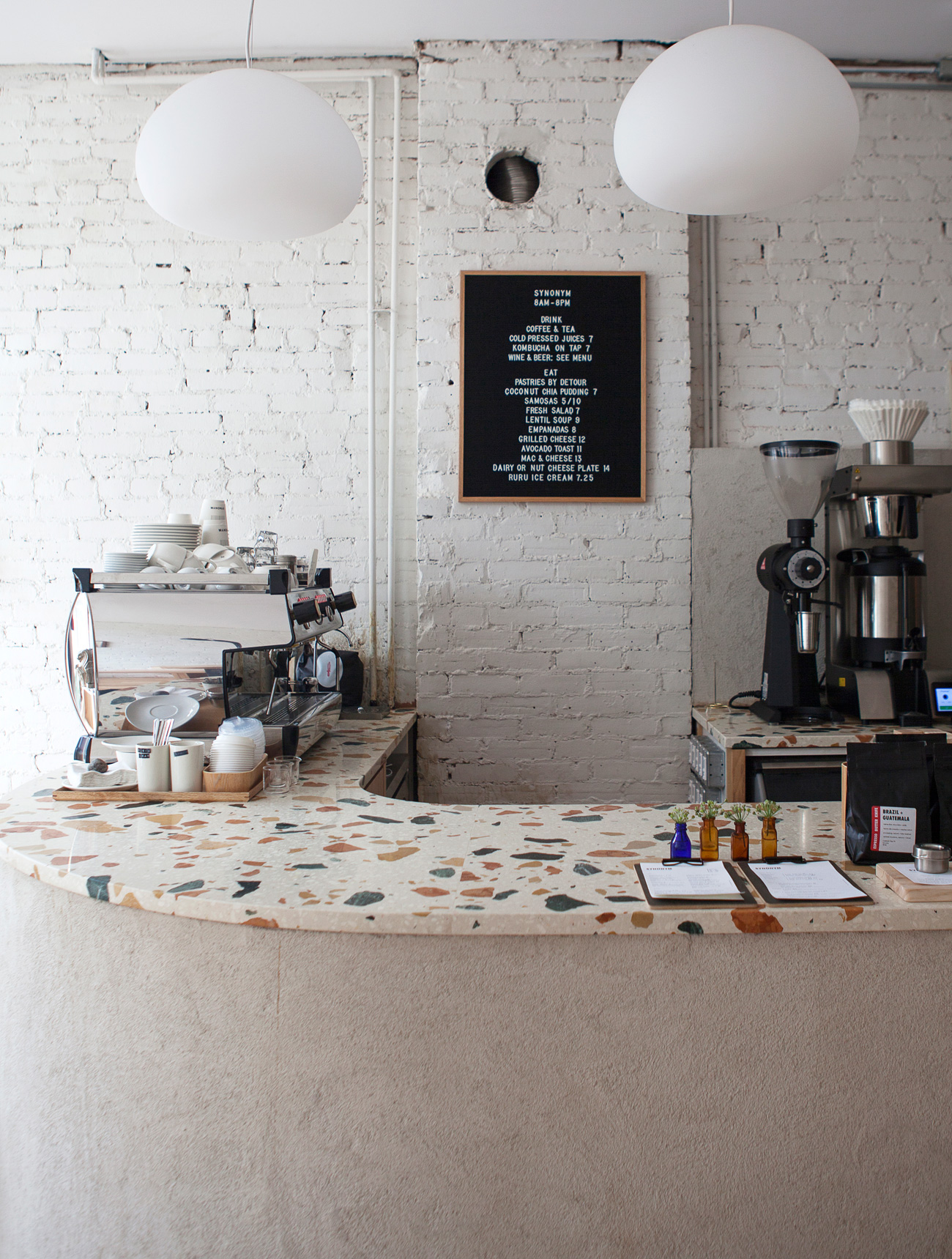 “There’s one dark green marble called Verde Alpi from Torino that could be in an ornate home,” explains Ayisha Izmeth, who co-owns the multi-disciplinary shop with her husband, Sid Singh. “It’s significant on its own, but together with the other varieties, it creates an even more striking image.”

According to the pair, the same goes for Hamilton’s creative community, whose motto is: “we’re stronger together.” Young families, artists and freelancers happily shared real estate on the weekend we visited. There was even an out-of-town designer (in tell-tale heavy framed glasses) conversing with the owners about the cafe’s museum-worthy furnishings. Think Alvar Aalto chairs, vintage Charlotte Perriand stools and Muuto‘s Fluid pendants above the bar, from Klaus. 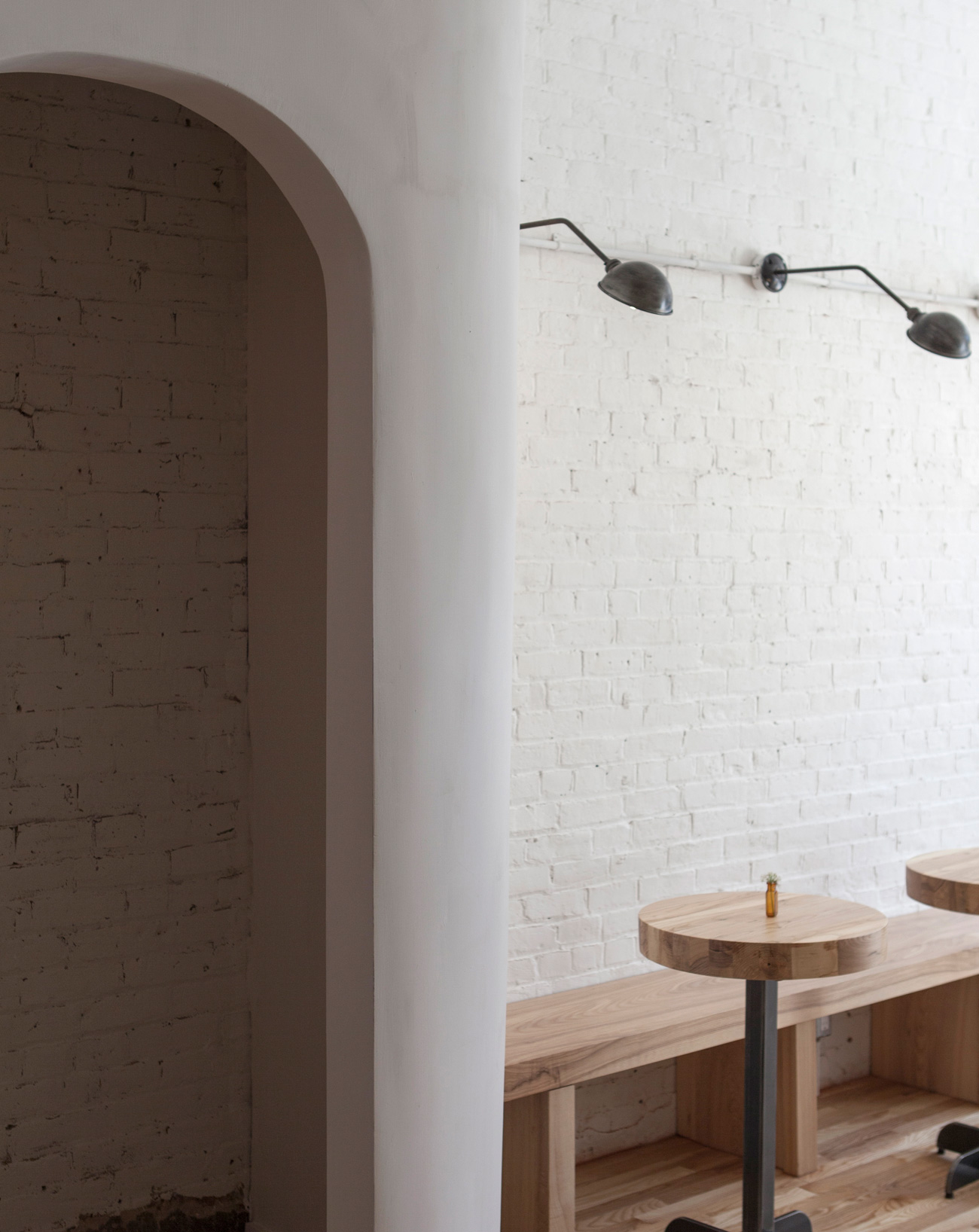 Even these designy touches make sense. In Toronto, Sid worked at Avenue Road because it was the only showroom to stock his favourite Oscar Niemeyer chair. As for the terrazzo, the couple pinned it to dozens of mood boards before opening shop. However, turning what was essentially a “napkin idea” into a reality needed another set of eyes. So the couple turned to rising Montreal architecture firm Atelier Barda, known for their spare, elegant aesthetic, to smooth away the rough edges.

As a result, the 72-metre-square former art gallery is now defined by curves, archways, and subtle transitions and tonalities. “We appreciate the softness of curves because they lend a more human feel and scale to a project. In close proximity, they respond well to human interactions,” says Kevin Botchar, Atelier Barda’s director. 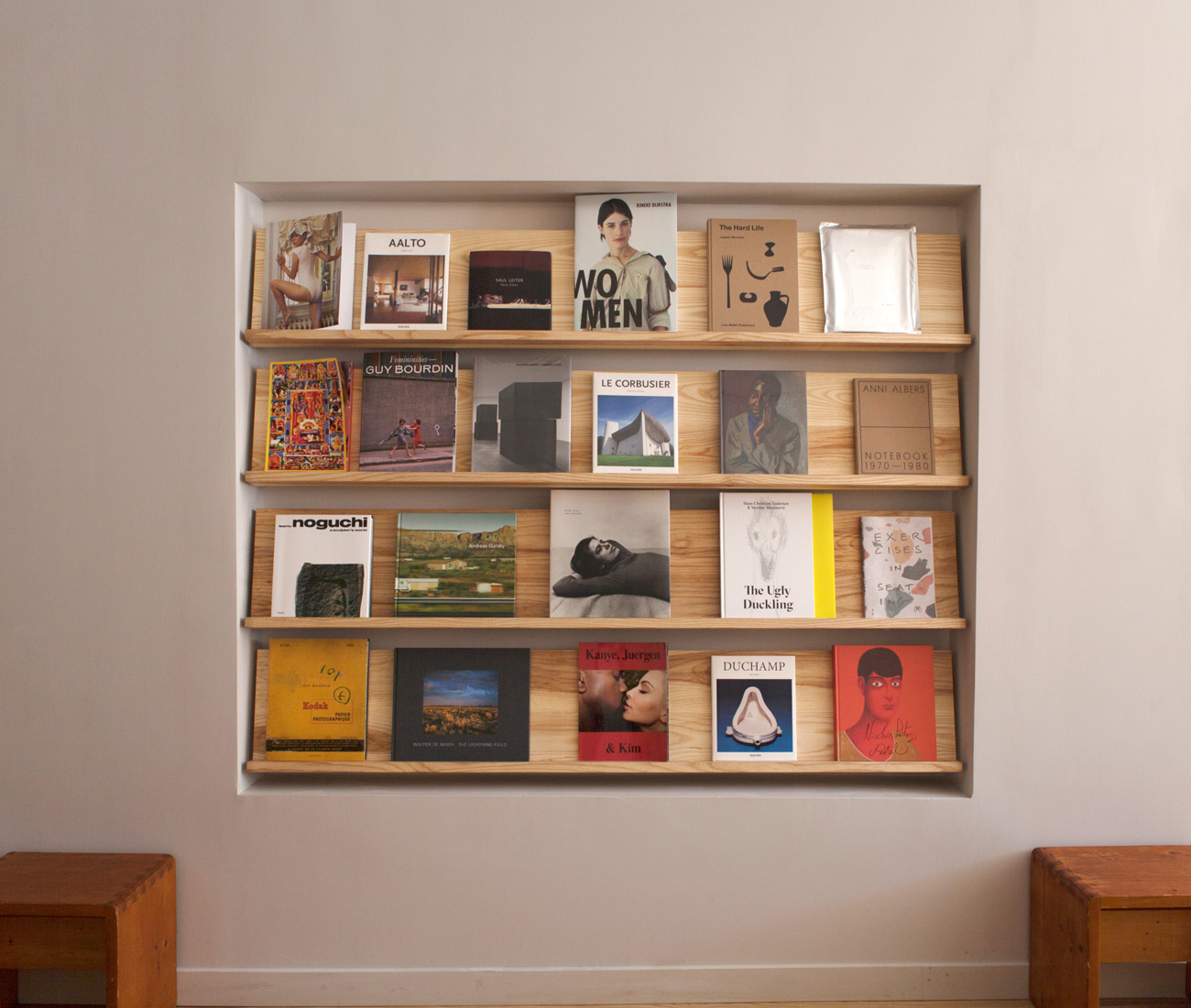 The beauty, he continues, is how few interventions were required to transform the 100-year-old building into such a welcoming space. (How they accommodated plumbing and electricity in the basement is another story, for another time). “Most of the conceptual effort went into the design of the bar and furniture, as well as selecting ideal finishes such as the DZEK terrazzo and lime plastered walls and bar.”

Luckily, the building had good bones. “Structural brick walls were already present, although some were covered with plaster, so we made sure to either expose or highlight them.” Although the space is mostly white, the brick and plaster lend texture — a feature not many art galleries allow (the new, industrial-forward MOCA being a glaring exception). 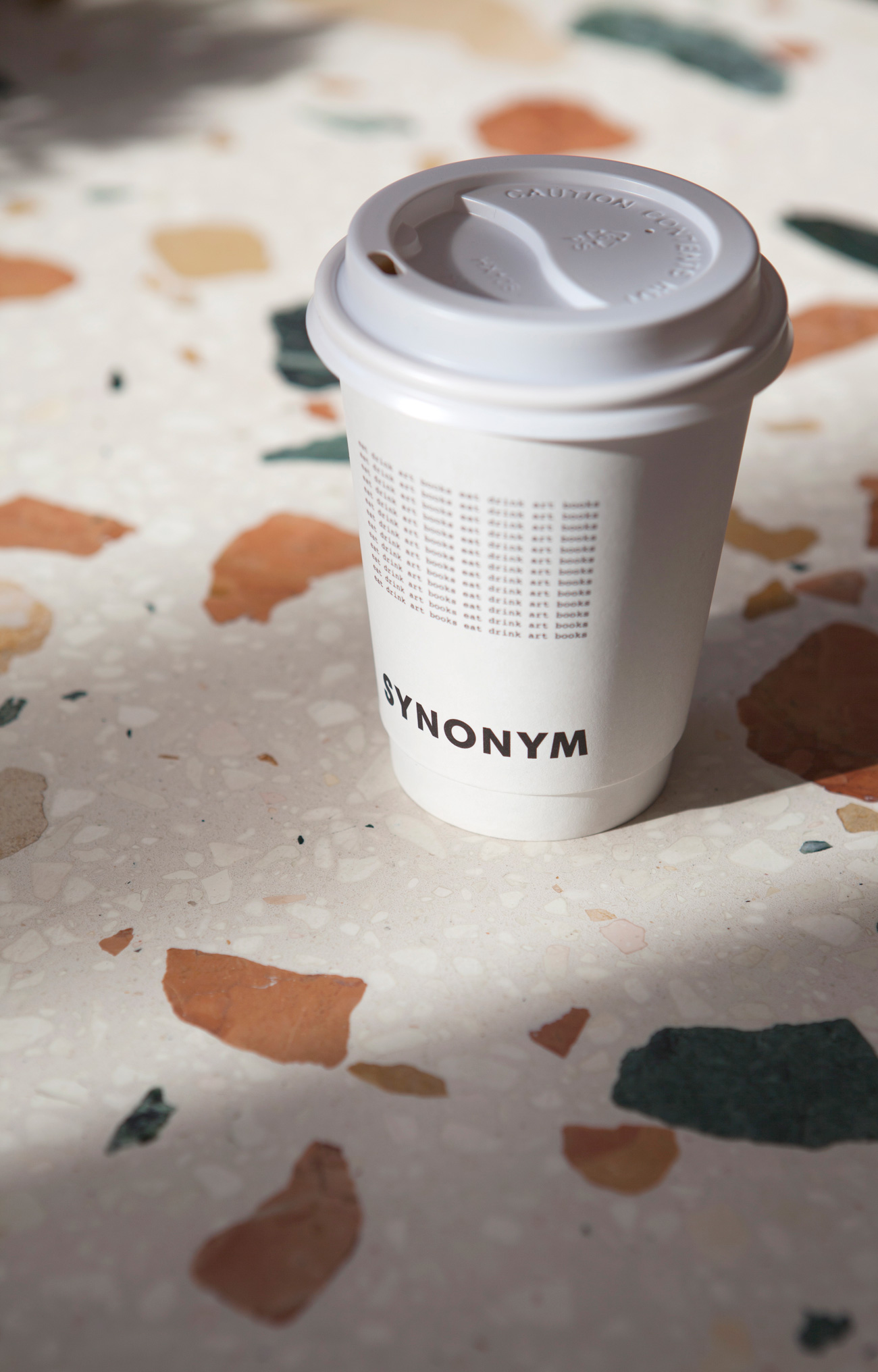 With co-owners Sid and Ayisha acting as general contractors, the team managed to stay within budget. “The simplicity of the transformation in quite important, too. It shows, especially in projects like these where budgets aren’t bottomless pits, that you can achieve a beautiful result with the right effort put in the right place.”

A little personality goes a long way as well. One of the cafe’s best selling menu items is the synonym roll, which tastes as good as it sounds. In a highly curated space, the puns are always free.