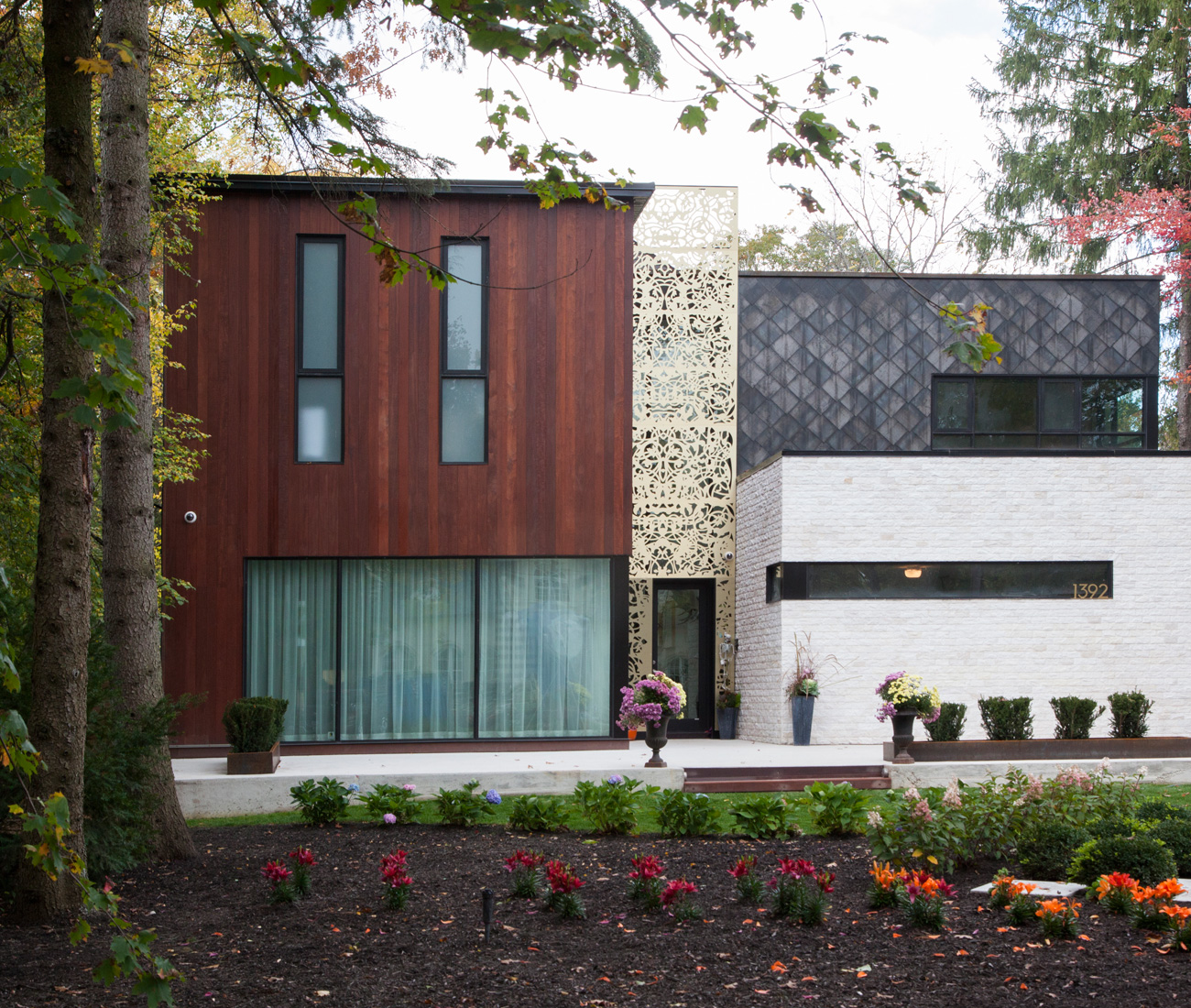 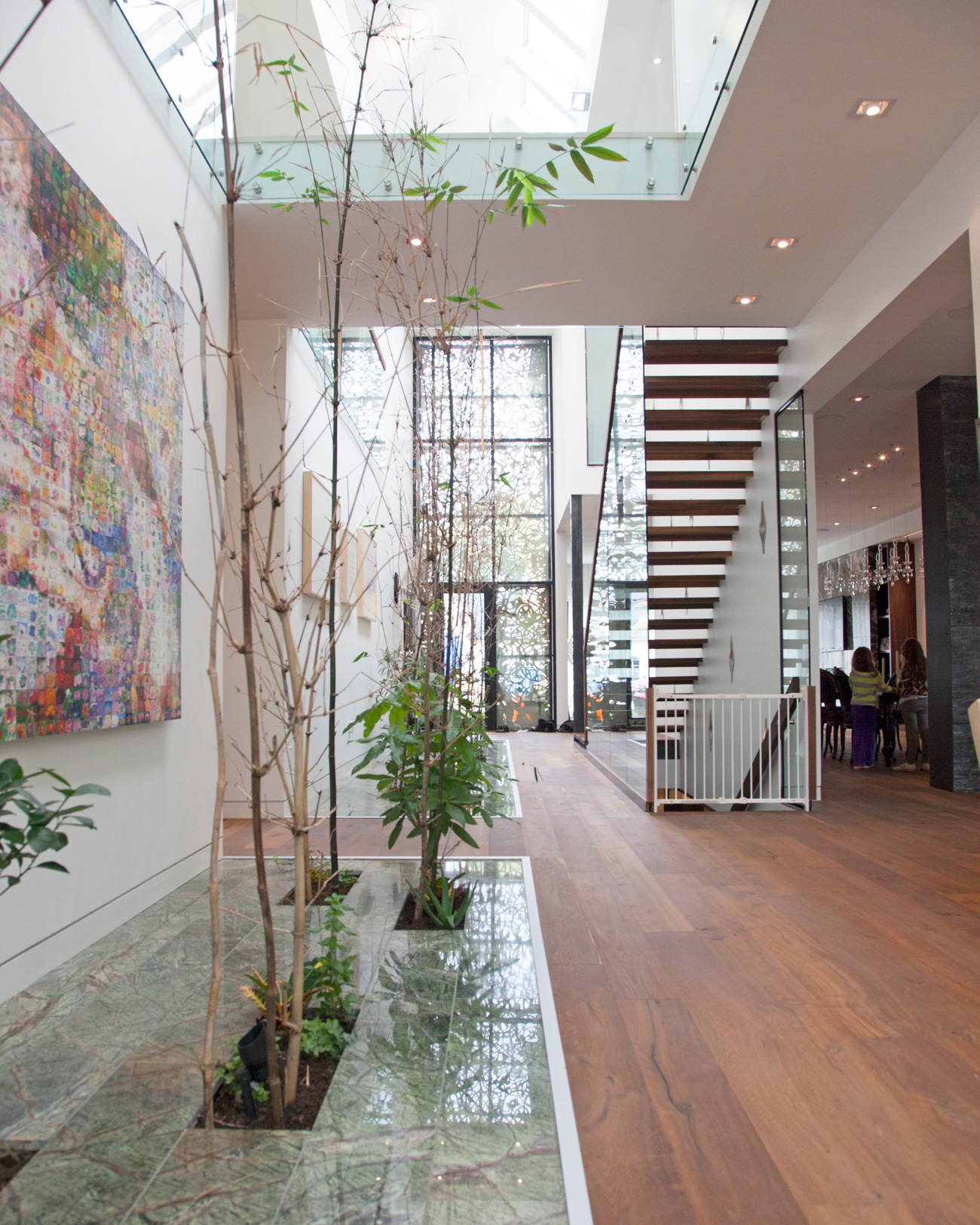 An atrium runs the length of the house and is capped with an equally long skylight. Green marble surrounds bamboo shoots; oil painting by Cameron Gray. 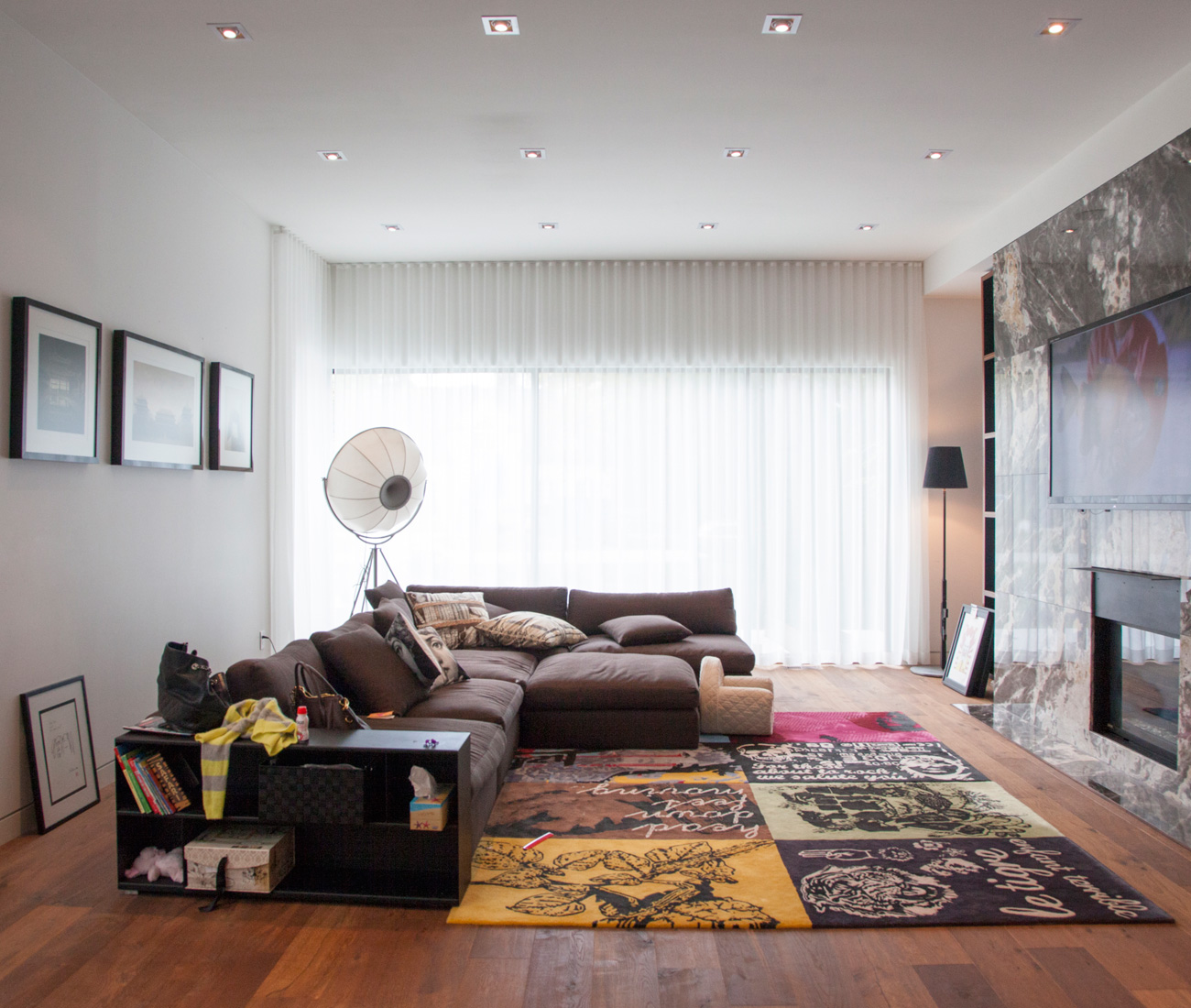 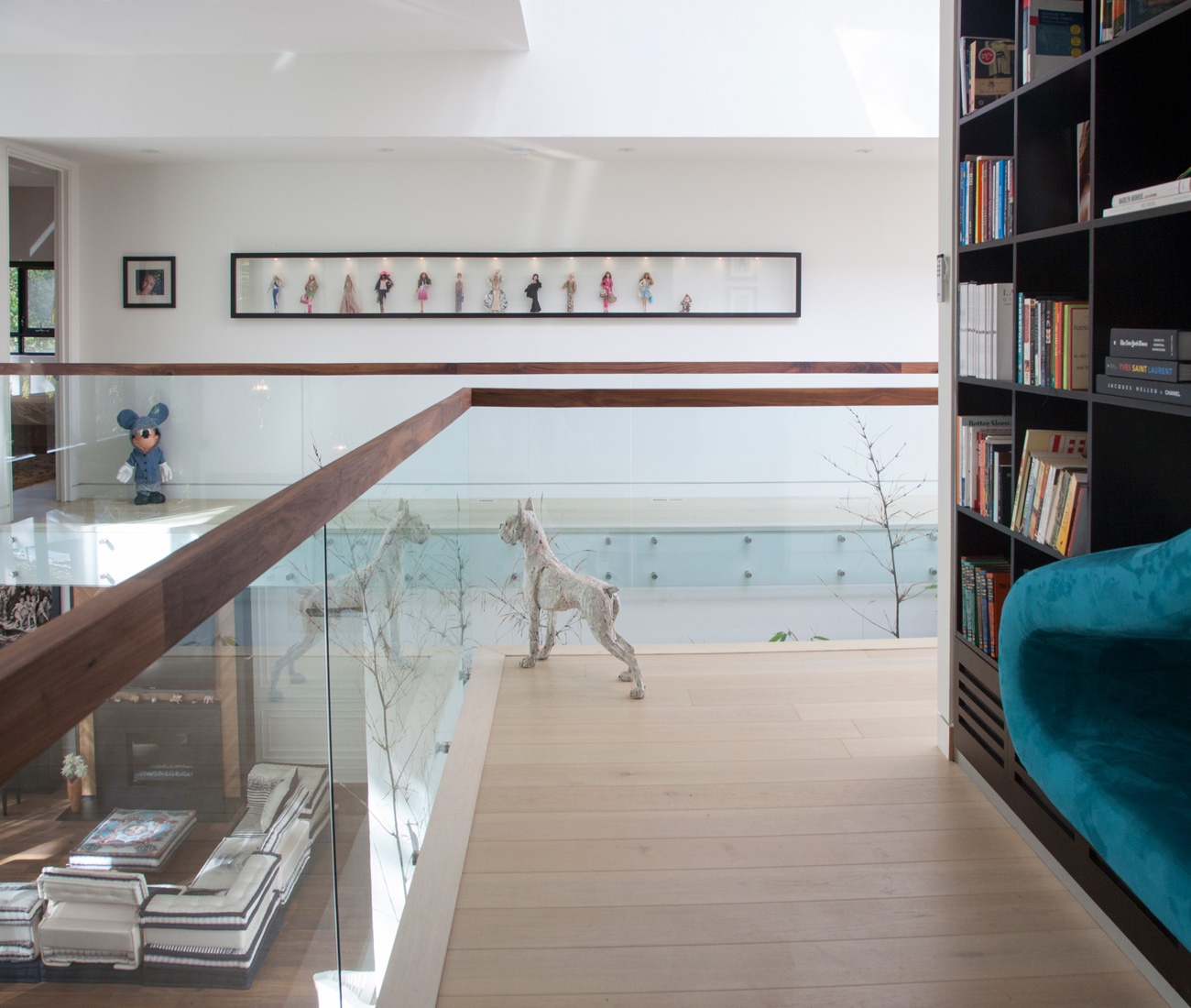 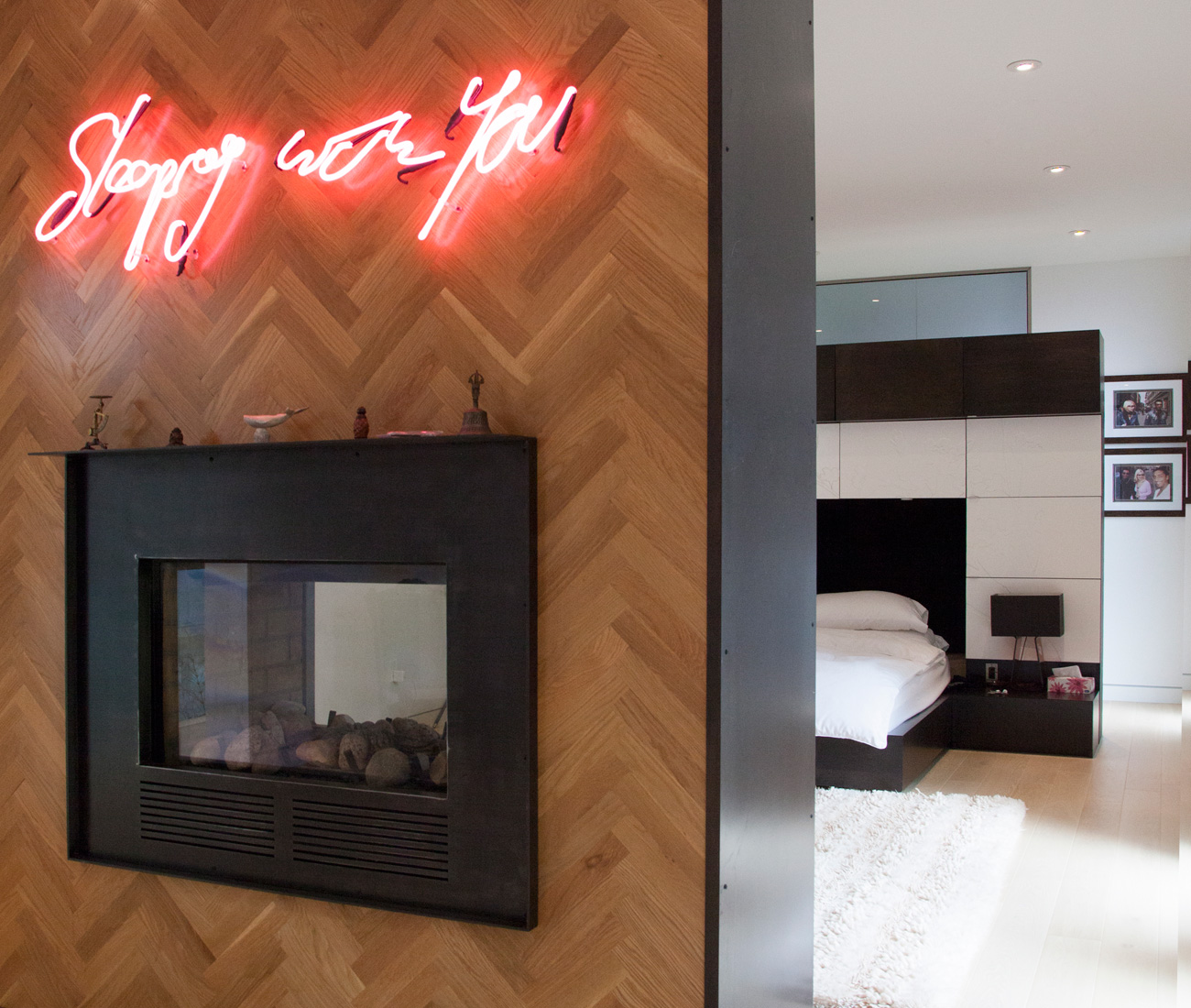 A two-sided, room-dividing fireplace in the master bedroom is clad with herringbone oak. Sleeping with You sign by PDLab. 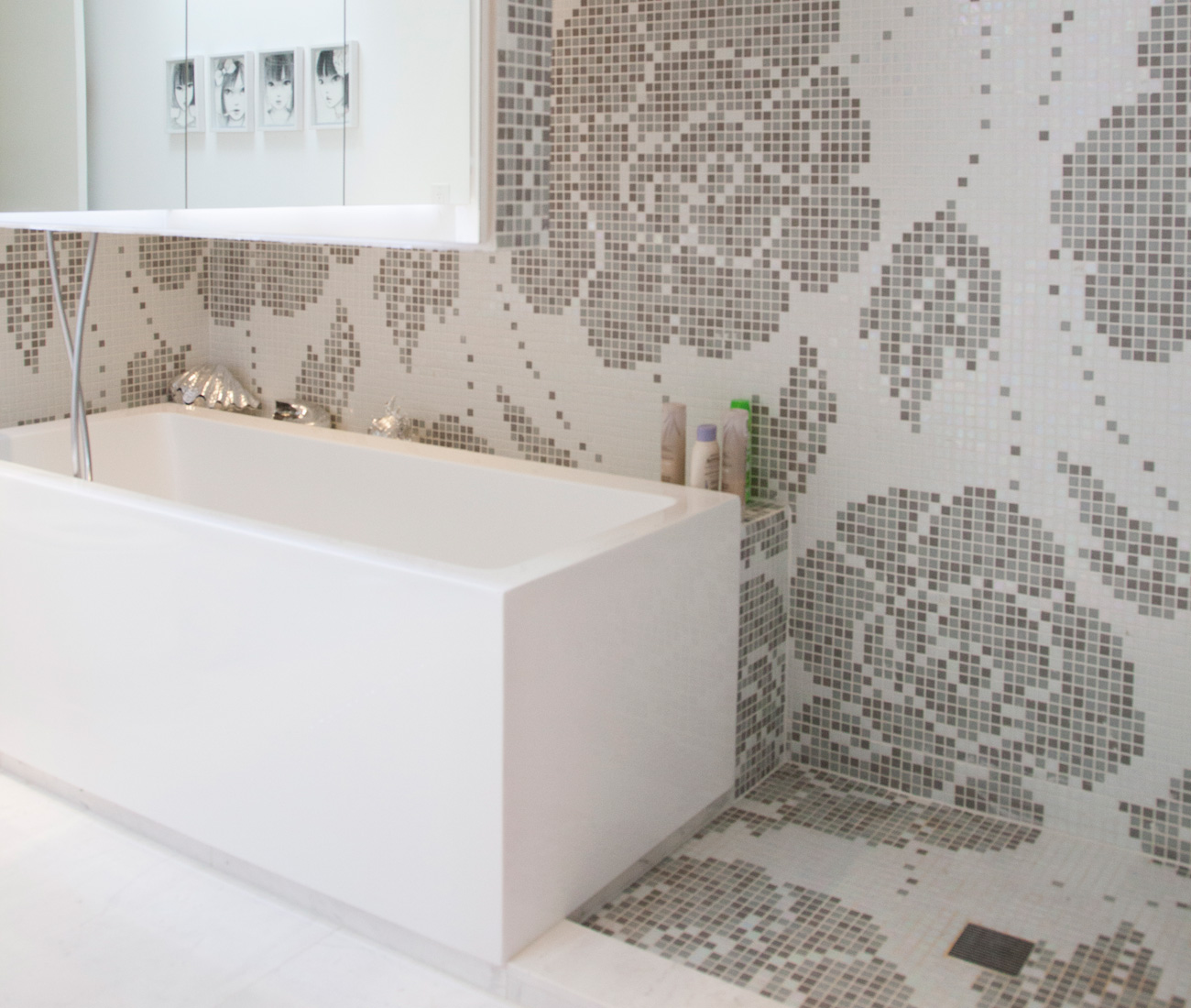 A Lorne Park home takes inspiration from the outside environment

When Antonio Tadrissi set out to build a 650-square-metre family home on a wooded lot in Lorne Park, Mississauga, the goal was a retreat-like environment designed around his three kids, the art collection he and his wife share, and their love of entertaining. It had to be sophisticated, playful and functional – a tall order but, as principal of architecture and interior design firm Prototype Design Lab, one he could pull off. PDLab’s portfolio of commercial and residential projects extol fantastic gestures in captivating materials, many of which are fabricated at its on-site facility.

“I wanted our home to read as an extension of the landscape,” he says. As a result, the wondrous structure pulls the calming effects of nature inside. First, it does so in a literal sense, with an interior bamboo garden in the vaulted atrium and a living wall above the wet bar. Then, decoratively, as seen in striking surfaces everywhere from streaky eucalyptus cabinetry to floors of green marble. And, finally, in a subtle way: the home’s very layout. Tadrissi divided the house into distinct but harmonious volumes according to function. Through the filigree entrance, the 8.5-metre-high atrium (capped with angular, operable skylights)illuminates the structure’s flow. Central to this great hall, which runs through the heart of the home and affords front-to-back views of the outdoors, is a sculptural, open-tread staircase.

Head south, and a large wall separates the family and dining rooms, yet can be pivoted to combine the spaces into one. The adjacent kitchen houses a six-metre-long island that operates as a workspace, breakfast bar and informal entertaining area, and can open up completely to the deck and negative edge pool via a folding glass wall system. North of the stairway, past the bamboo garden, lies the sunken living room. Here, traditional moulded wall panels were customized to accommodate paintings and collages by Damian Harris and Cameron Gray.

A mezzanine bridges the atrium and connects both sides of the second storey. On one end, the children’s bedrooms are delineated by illuminated display cases for vintage tin toys and collector Barbies; on the opposite, is the master bedroom and a library with a Cookie Monster–blue reading nook that overlooks the kitchen. Even the building’s exterior, clad in Cumaru wood, laser-cut brass, white quartz and Corten steel – each material defining a distinct volume – is a collage that evokes nature’s variegated textures and tones. “Eventually, the steel will change colour; the brass will develop a patina,” Tadrissi says. “The home itself will evolve, just like the environment that inspired its design and the people who live here.”

Originally published in our Summer 2014 issue as Wild Thing.