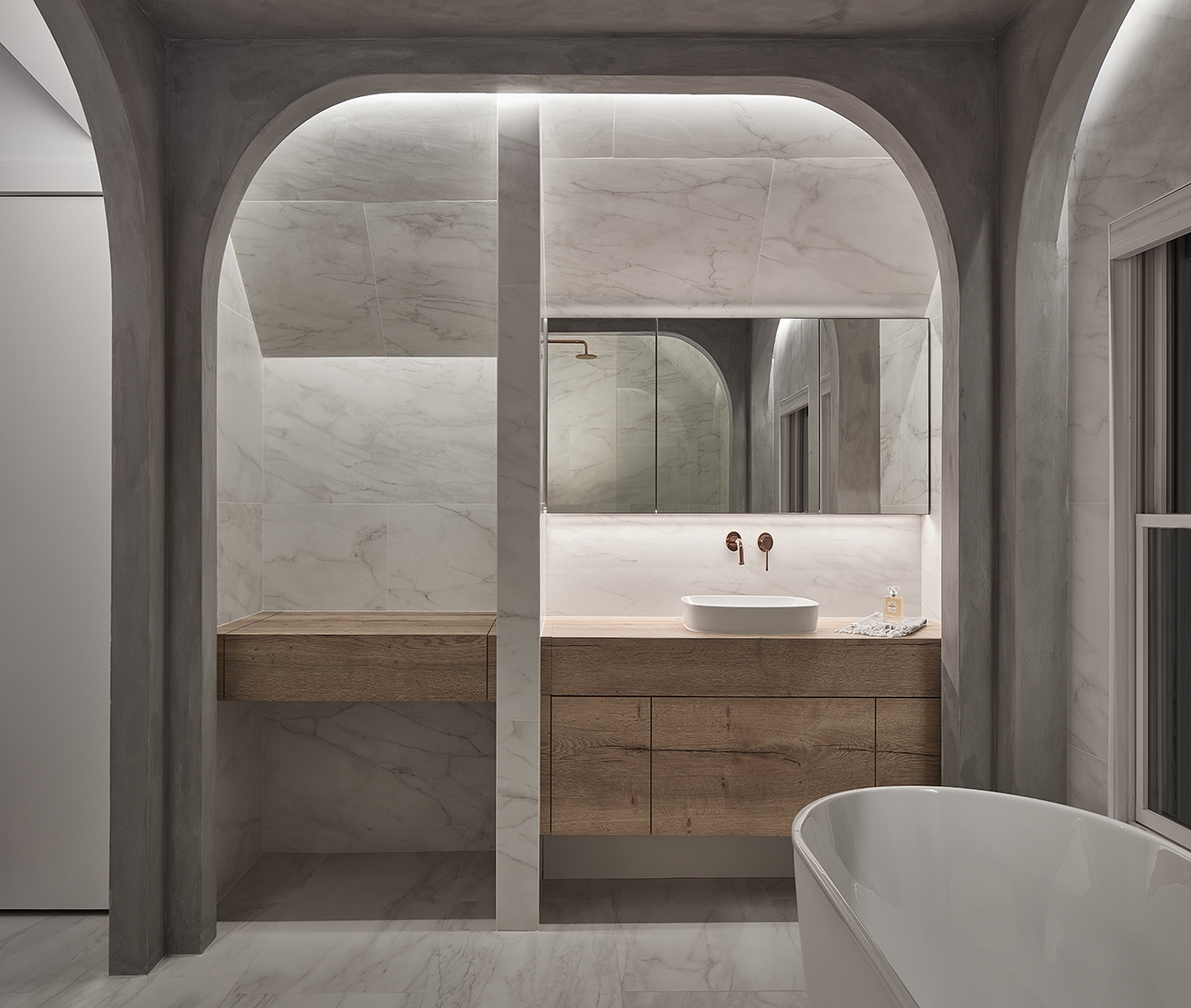 These tranquil bathrooms are ready to inspire epiphanies.

We all need a space to retire to after a long day — and sometimes, that space is a well-appointed washroom. After all, there’s nothing quite as rejuvenating as a hot bath or a cold shower. Designed by local architects here in Toronto, these bathroom designs inspire a sense of calm and quiet in the bustling city. 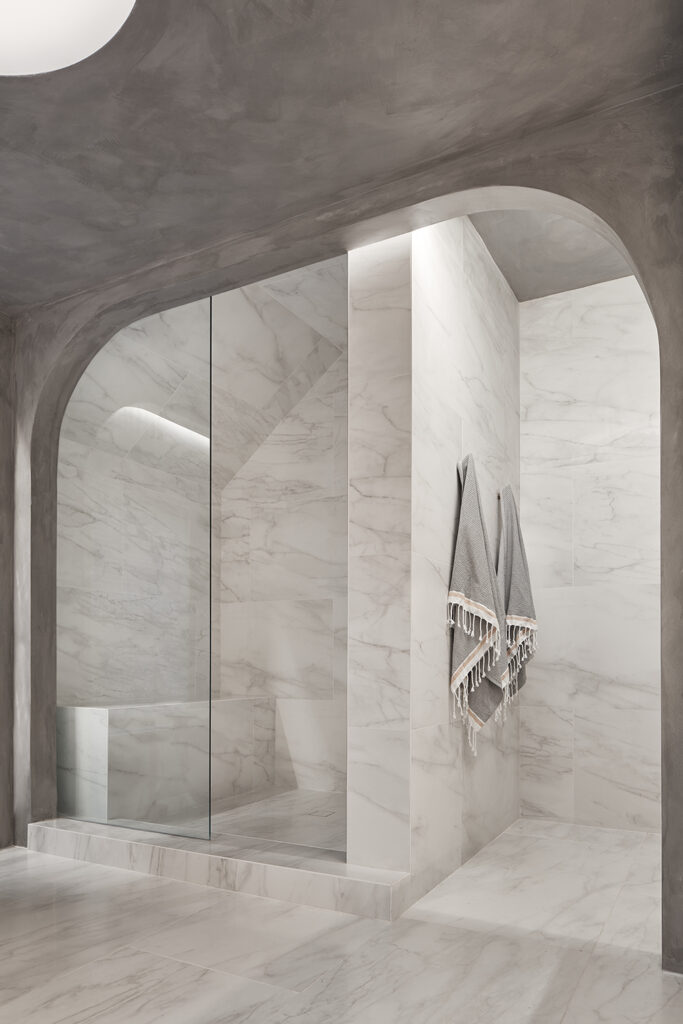 When two well-travelled clients enlisted Reflect Architecture’s Trevor Wallace to revamp their ensuite, he set out to recreate one of their favourite destinations: Istanbul’s Kılıç Ali Paşa Hamamı. Granted, developing an expansive, relaxing retreat in a tight third-floor space with a few sloped rooflines was no easy feat. Taking inspiration from the spa’s organization of coves around a central dome, Wallace introduced a symmetrical arrangement of cozy arched nooks that house the bathroom’s shower, sink and toilet, along with a custom-built vanity desk featuring a fold-up mirror. These glowing, angular alcoves border a central “restoration zone” that positions a luxurious soaker tub to benefit from a view of the city beyond. Adding to this natural light, an oculus-like luminaire takes the place of the hammam’s skylit dome. Throughout, marble-like porcelain tile gives the appearance of natural stone without the need for constant cleaning. After all, the only thing more calming than a hammam-style bathroom is a low-maintenance shower. REFLECTARCHITECTURE.COM 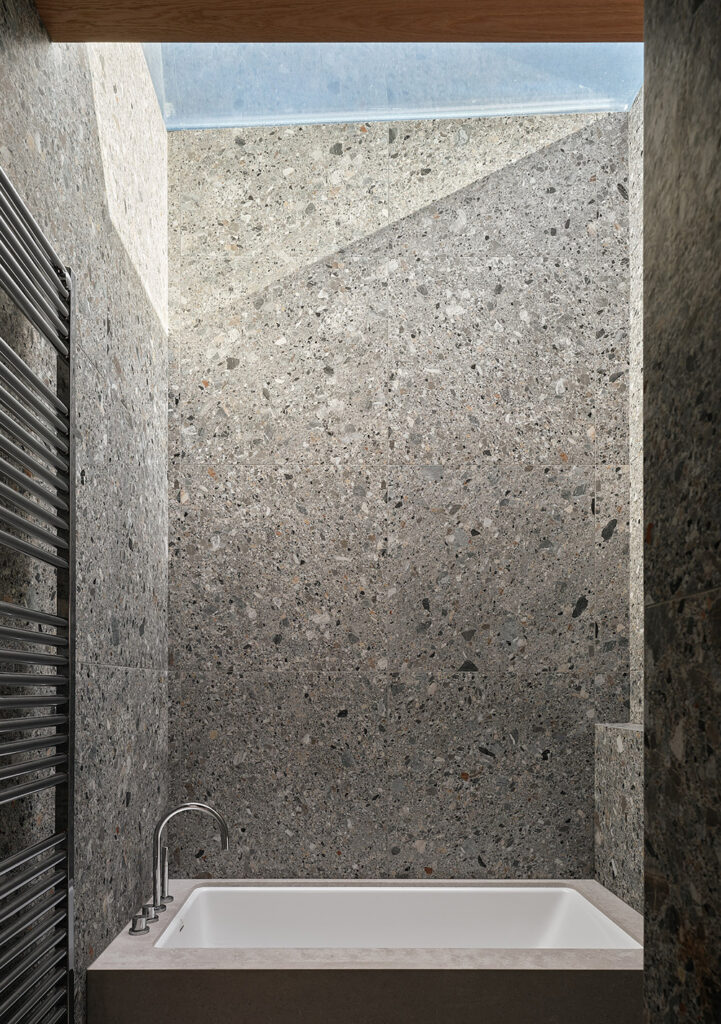 Inspired by the dual identity of the Beaches – a neighbourhood where city and shoreline intersect – design studio Odami has devised a family home that balances natural serenity with contemporary edge. In the bathroom, that translates to Porcelanosa’s terrazzo Ceppo stone, which evokes smooth beach rocks as much as the urban grit of city streets. Using the material for both the flooring and the walls helps to distinguish the walk-in shower and Victoria + Albert bathtub behind it (itself encased in Caesarstone Topus Concrete) as part of their own cave-like retreat, distinct from the rest of the house’s airy white rooms. Adding to the feeling of stillness, one traditional beach house element did make it into this earthy grotto: in a surf shack–like touch, the ceiling above the shower and vanity is clad in oak hardwood flooring from Moncer. And, by placing a skylight over the tub, the architects allow bathers to feel the sun as they soak, effectively experiencing some of the magic of a lake swim indoors. ODAMI.CA 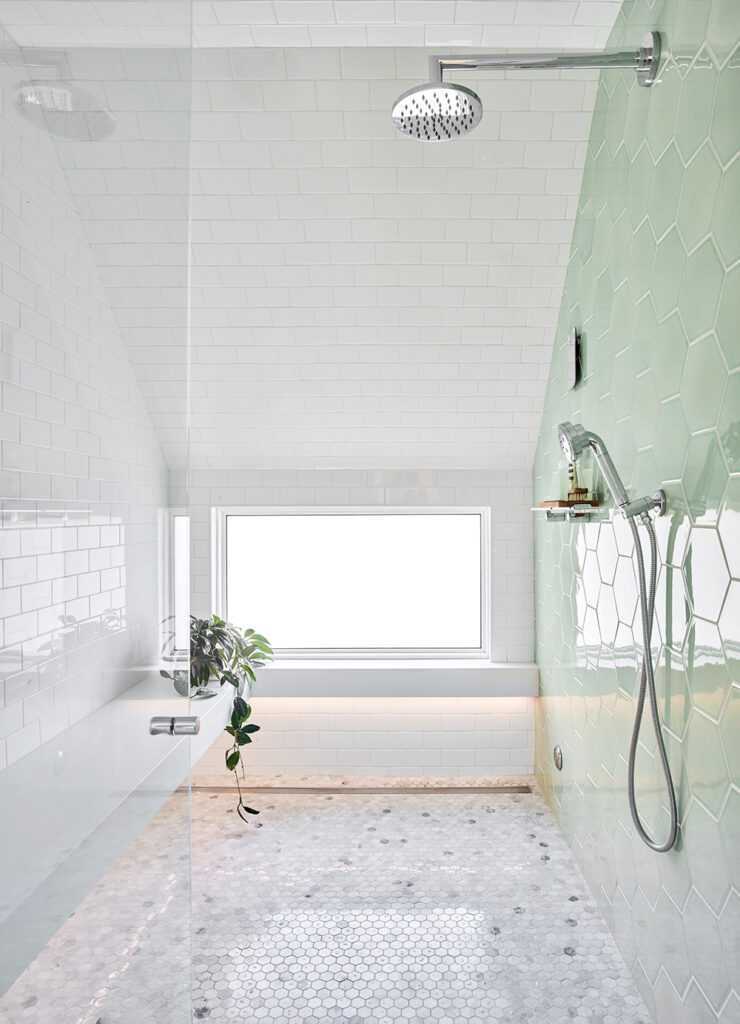 Often, the best place for serious contemplation isn’t at your desk – it’s in the bath. Architect Wanda Ely understands. By expanding her clients’ primary bathroom into a former study, she carved out extra space for focused self-care. Now, a soaker tub and an enclosed steam shower are joined by walnut cabinetry with plenty of storage for organizing toiletries. Along with the room’s extra-large footprint comes a new extra-long skylight, carved directly above the tub to warm up long soaks with a few sunbeams. This same regard for nature extends to the room’s colour palette; a pebble-like arrangement of hexagonal grey marble floor tiles is complemented by a sea-green feature wall that scales the same shape up to oversized proportions. But the room’s most relaxing element of all is the wraparound bench installed in the shower, which provides a welcome spot to absorb some steam and enjoy the glow through the frosted window. In a sanctuary this enlightened, bright ideas come easily. WANDAELYARCHITECT.COM