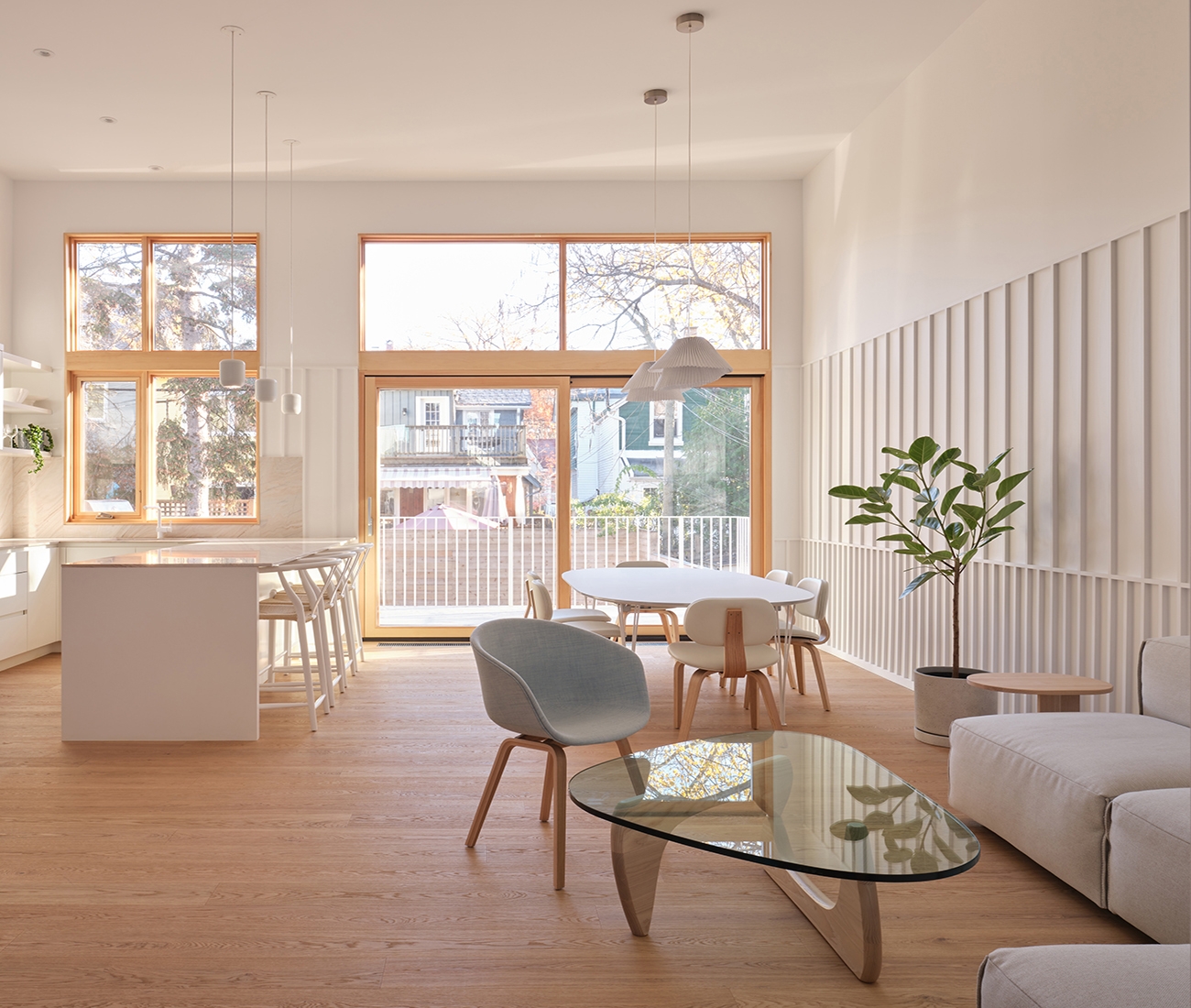 On a side street off of Queen Street East, only a stone’s throw from Kew Gardens and Woodbine Beach, a discrete three-storey home with clapboard siding replicates the area’s typology without making much of a fuss. The interior, though, is a crown jewel. Local design and architecture firm Odami — the brainchild of Aránzazu González Bernardo and Michael Norman Fohring — was brought on to elevate the interior design in this Beaches house.

The owners reached out to the firm to help refine the project after admiring their work at downtown restaurant Sara. “They wanted to make sure the space wasn’t too cold,” says Fohring. Though Odami made a couple changes to the home’s layout — specifically in the largest bedroom, to parse out space for a walk-in closet — most of the architecture was already in place. 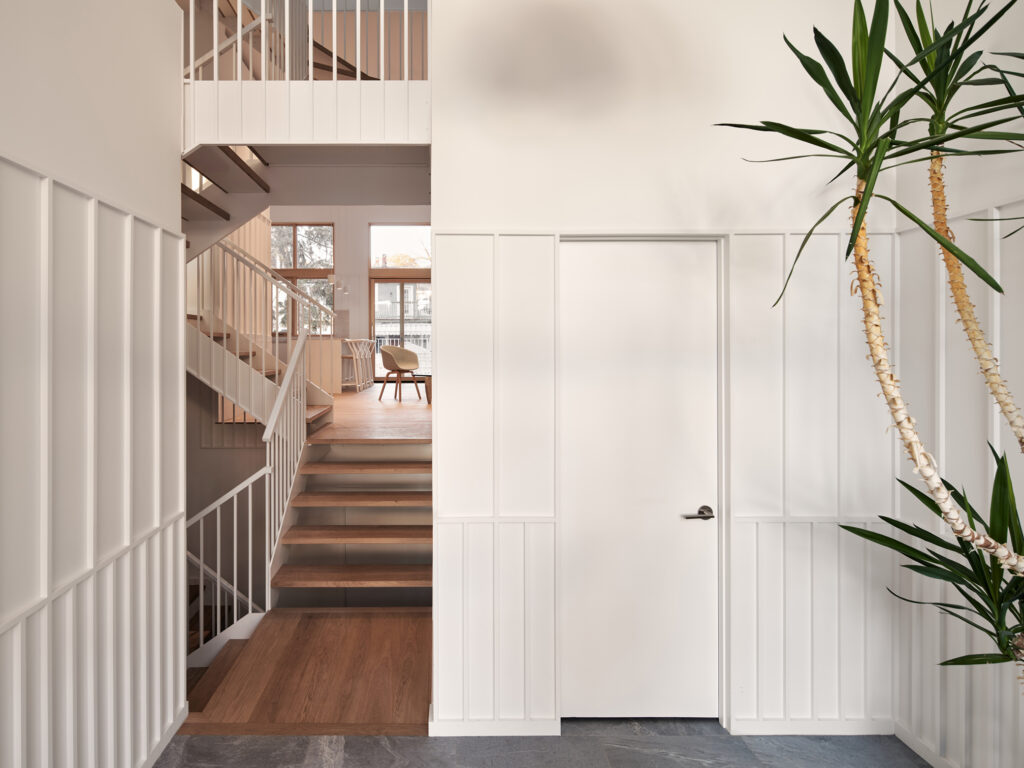 With crisp white walls and vertiginous ceilings, the house has a cathedral-like appeal, but doesn’t exactly scream cozy. Odami’s light touch changed that. A mudroom at the home’s entrance is a microcosm of the rest of the house: decorated with wood panelling and anchored by a grey stone floor, it’s only a taste of what’s to come in the living room beyond.

Odami worked closely with carpenters at Tamarack Construction Co. to achieve their vision for the wood panelling in the living room; to achieve the look, MDF was cut into strips and applied directly on the wall, then painted a matching white. “We considered a wood colour, but it felt a bit too rustic. The white speaks to the contemporary language that we wanted to maintain throughout the house,” says Bernardo.

In the open concept kitchen, countertops and an oversized backsplash made of Palissandro Classico marble make the space feel contemporary and clean. The marble itself, with its pinkish hue and copper veining, resembles the sand of the beaches only a block away. While the home’s design-oriented owners sourced most of the furniture, Odami set their sights on procuring the perfect light fixtures to complete the look. In the dining room, two pleated pendants by Spanish designer Arturo Alvarez hang from the ceiling — their biophilic shape, made of painted stainless steel, echoes the home’s down-to-earth materiality. 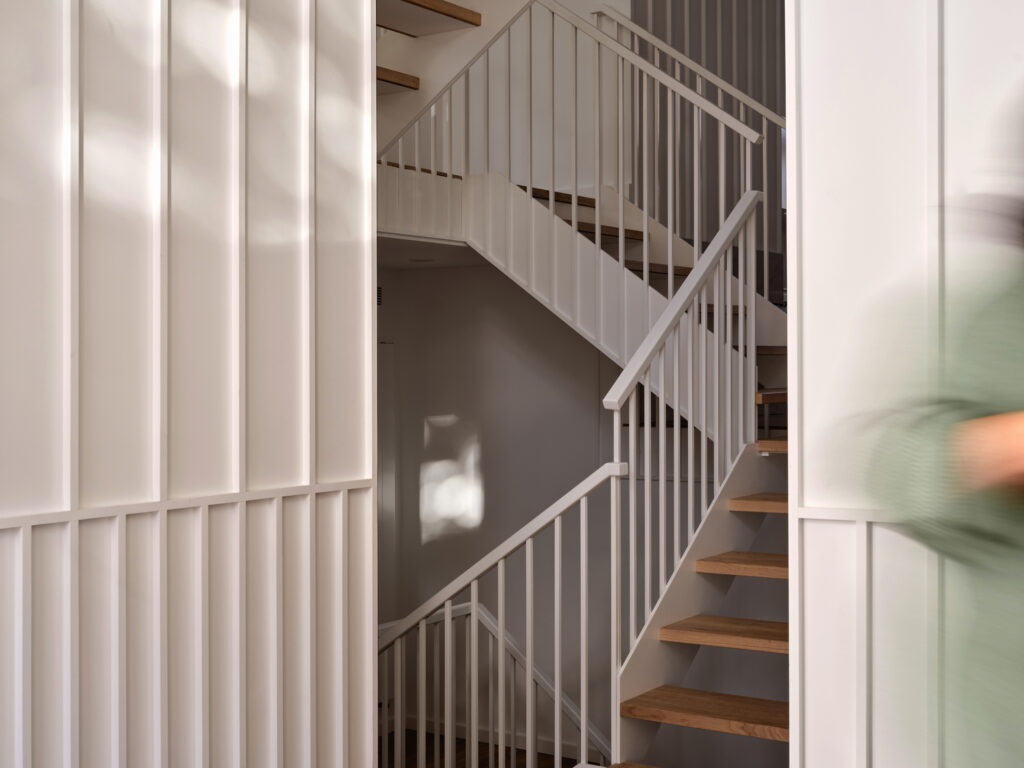 The updated floorplan, designed by Dero Design, features seven levels split over the height of a three-storey home. “All the spaces of the house are organized through its core, which is the staircase,” remarks Bernardo.  The three main bedrooms are on the top floor, while a basement with an entertainment room houses an extra bed for guests. 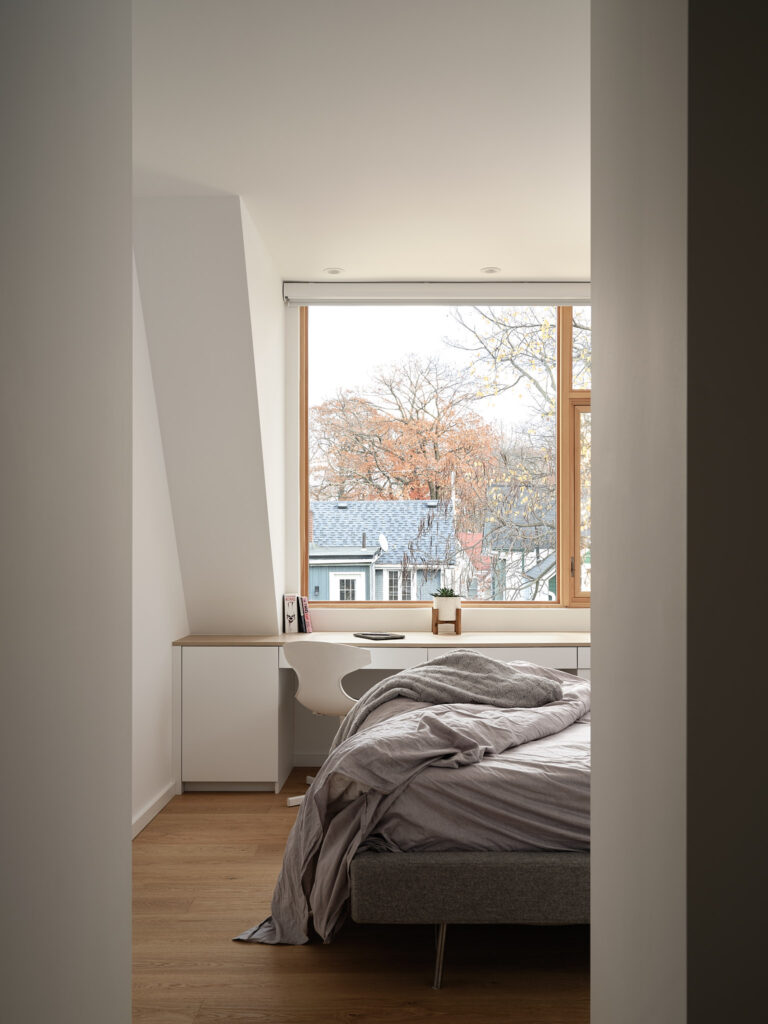 To maximize the use of space in the split-level structure, Odami designed several millwork additions throughout. In the upstairs bedrooms, they integrated built-in desks and storage to accommodate the upper floor’s slanted ceilings. An office corner, with a desk and drawers, makes use of one of the mezzanine spaces, while a wall media unit in the family room rounds out the millwork package.

The top floor’s piece de resistance, though, is undoubtedly the bathroom —spotless and spa-like, the loo features a large skylight above the bathtub for natural light during the day and convenient stargazing at night.  “We wanted the washroom to be a contrast to the rest of the house,” says Fohring. “There’s a lot of rhythm and movement throughout the house, but the bathroom is still.”

“Our ideas tied in with what the clients were looking for. They wanted it to feel like a house in the Beaches, but also a house on the beach.” The result is a space that bears the sophistication and refinement of an urban home, while reinterpreting components of a classic coastal house. odami.ca