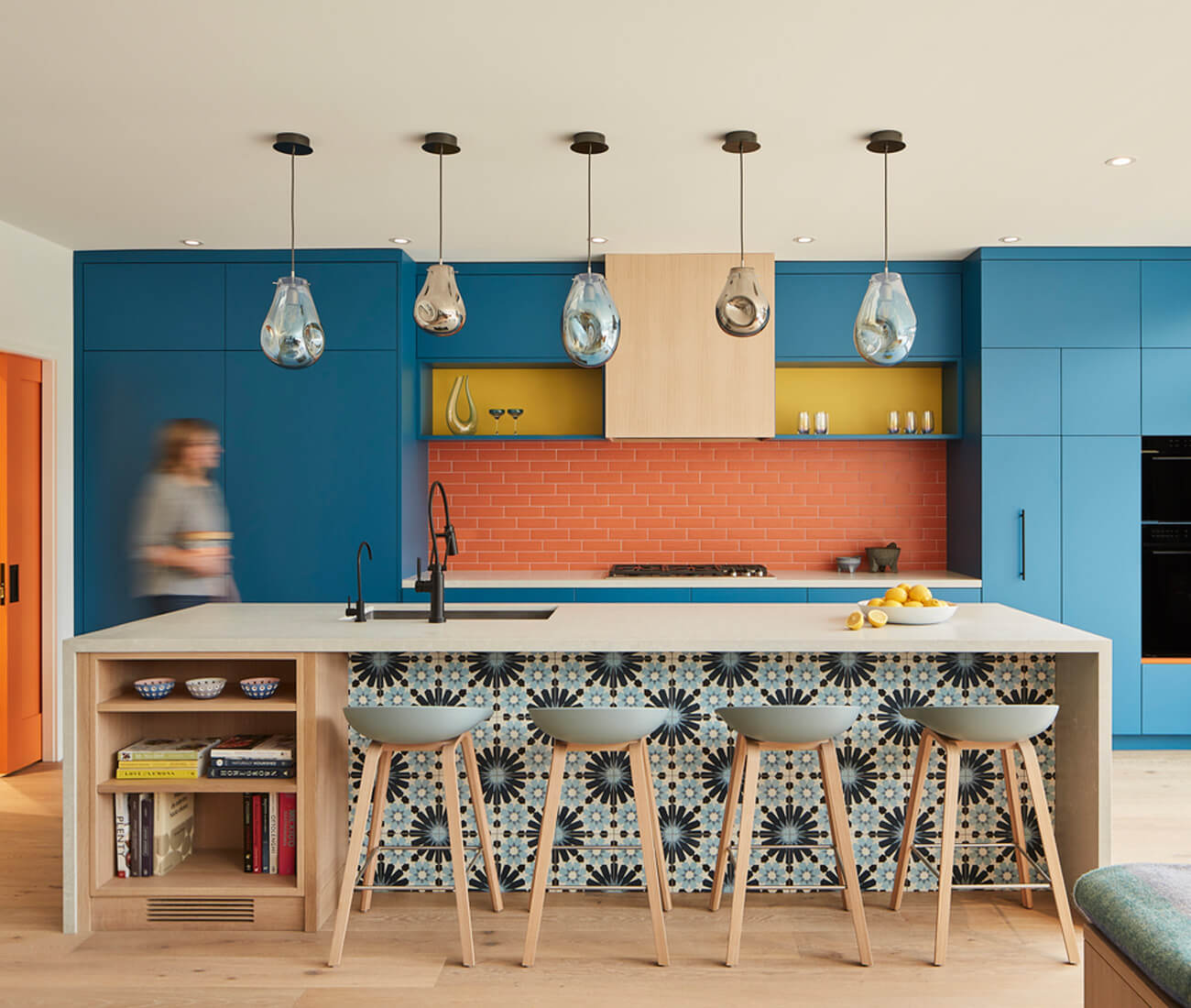 The island is clad in quartz from HanStone and backed by ocean blue millwork, orange subway tile, splashes of yellow and orange accents. Neutral elements, including wood shelving, black fixtures and Hay barstools, lend some restraint. The pendants are by AM Studio. 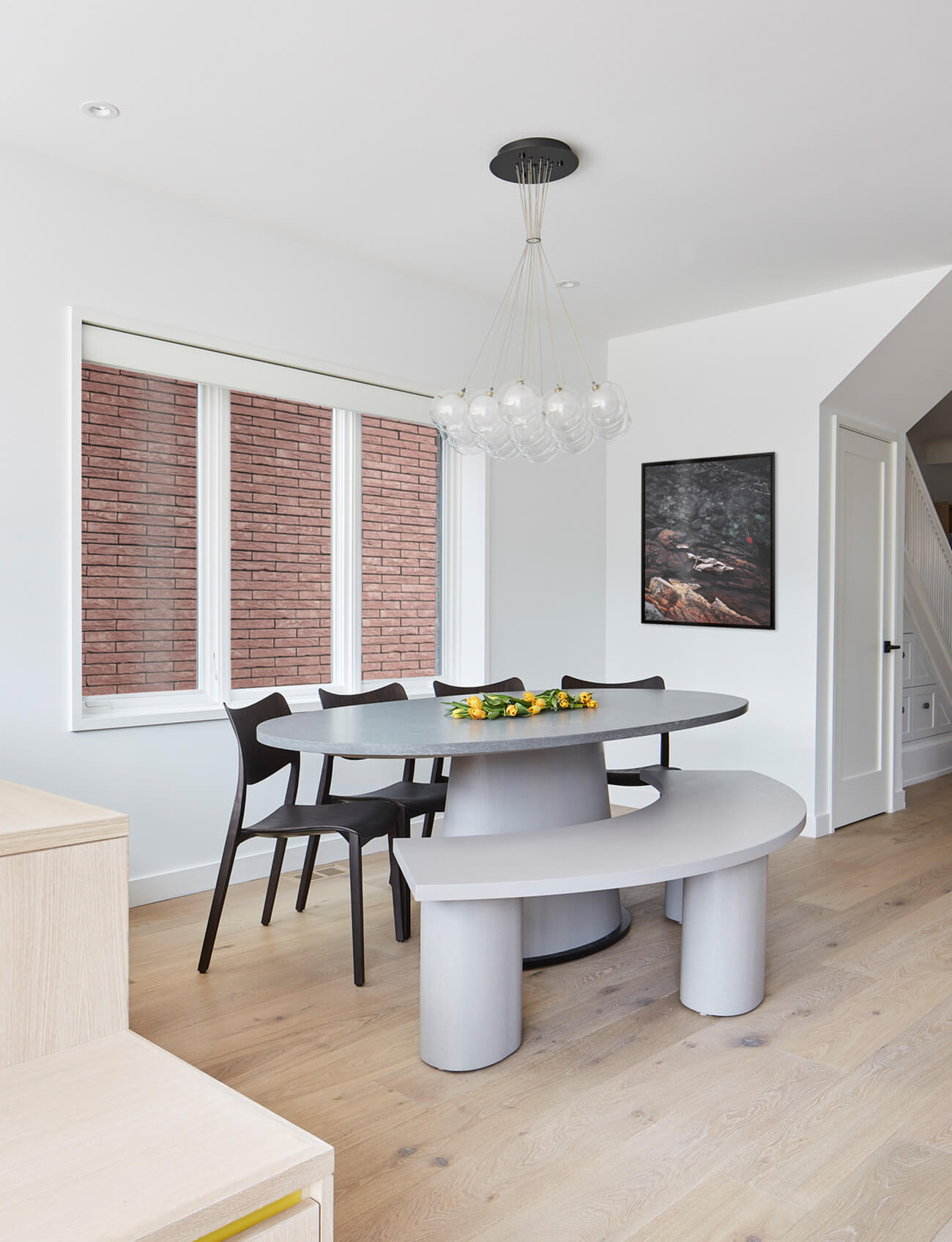 The dining table and bench were designed by Reinhart and fabricated by Cabinet Furniture. The millwork in the foreground was designed by Asquith. 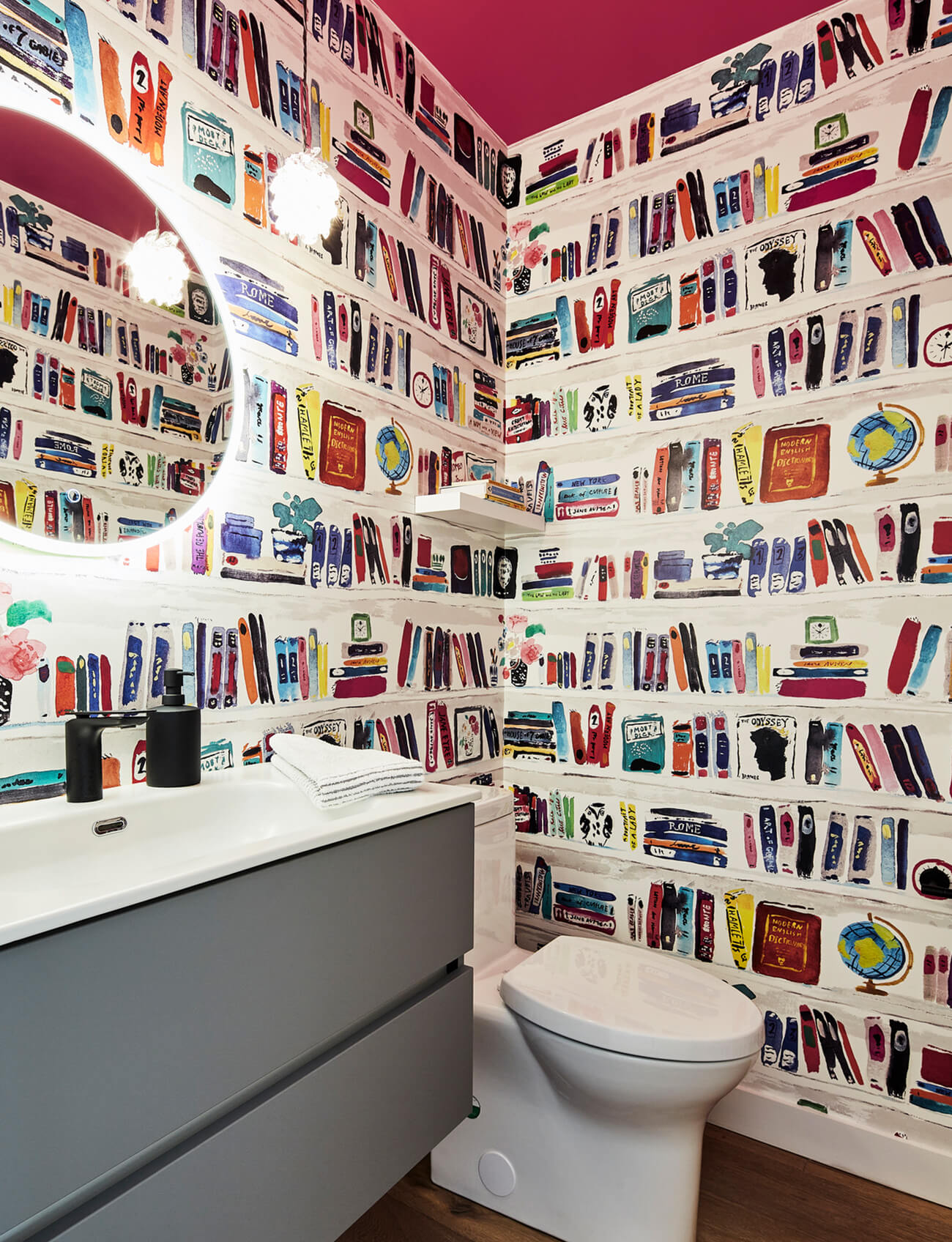 In addition to cooking, the owners are avid readers, making this wallpaper from Kravet for Kate Spade a natural fit. Pink was used on the ceiling to match accents in the wallpaper and, simply, because the home didn't have any yet. 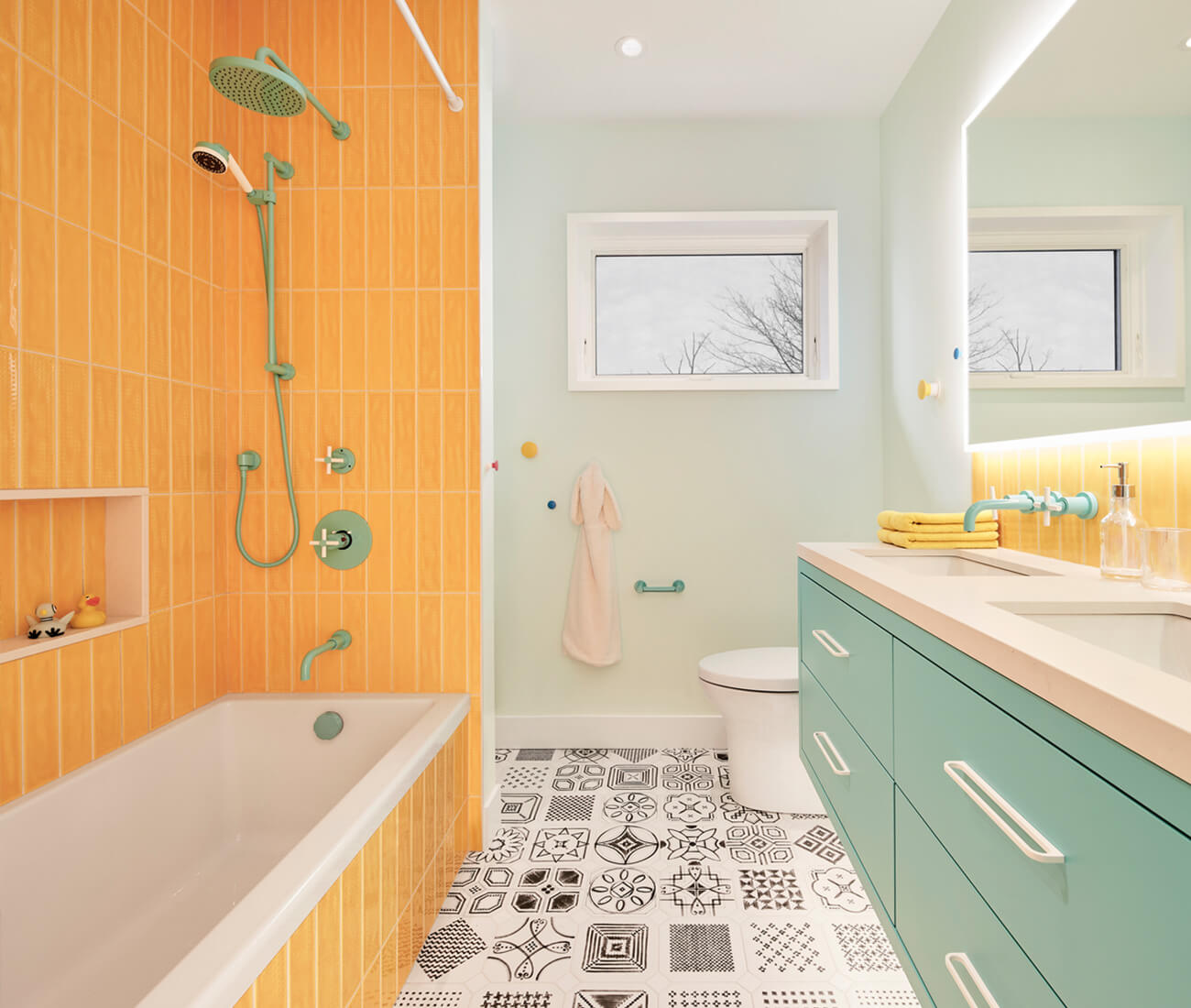 With pale teal and yellow, the kids' bathroom borrows from the bedrooms. Fixtures are by Rubinet Canada. 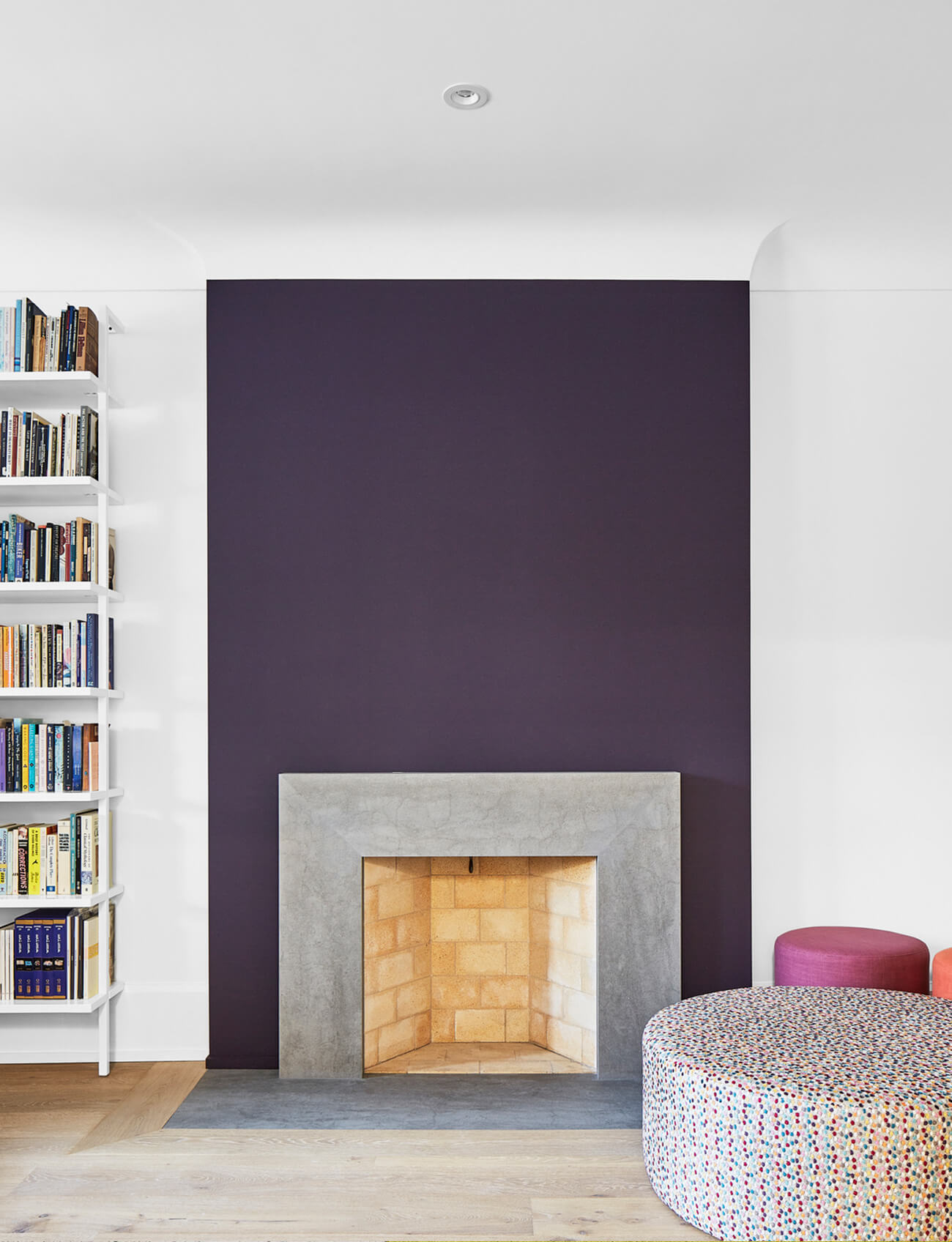 The fireplace was rebuilt to suit the new, sleeker space. A rich purple was used both to offset the home's bright palette, but also to match accents in its original stained glass windows. 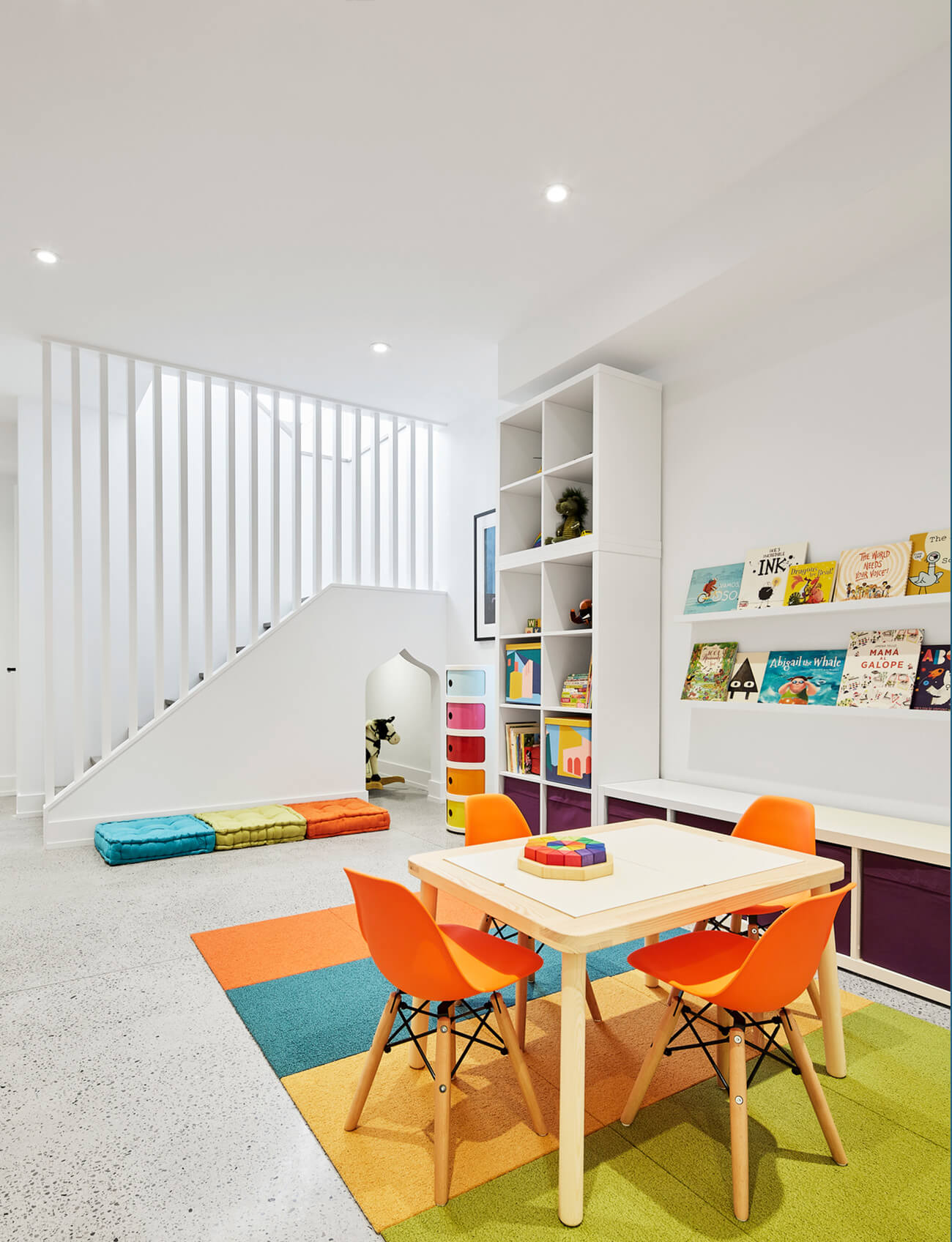 With durable Flor carpet tiles, the kids’ play area is ready to stand up to years of use. Furnishings were purchased at Kids at Home.
Share Tweet Pin Email Print

How a renovation and riot of colour flipped the script on a dour, century-old home

When Heather Asquith, principal of Asquith Architecture, and Julie Reinhart, owner of Julie Reinhart Interior Design, were brought in to re-imagine a dimly lit, century-old Edwardian, they were provided with a simple brief: make it the opposite of what it is now.

Recent transplants from New York City, the owners’ new home suffered from too much dark wood, too many walls and too little light – not exactly inviting, and even less accommodating of their three young children (the last of which arrived during the design process). But they bought it for its potential, of which it had plenty. They wanted colour, a veritable rainbow of it, and light to penetrate to every corner of the home. “They came to the project wanting their house to function differently for them,” says Reinhart.

But first they needed space – lots of it. Leaving the facade intact, Asquith knocked down the back wall and replaced the existing extension with a two-storey, cedar-clad addition that now houses the kitchen and staircase to the basement. Thanks to underpinning, the basement now has another two feet of ceiling height. Floor-to-ceiling windows offer generous views and plenty of natural light, while the staircase doubles as a light well for the kids’ play area and family room. The addition also allowed for the second floor to be rearranged around an additional bedroom and bathroom, bumping the square footage up to an even 3,000.

Now larger and far more open, the kitchen is the hub of the home. Walls were torn down to connect it with a small nook and dining area, while a large, tile-clad central island delineates the open-concept space and serves as a natural focal point and gathering place. A walk-in pantry and plenty of cabinets – all finished in the same cool bright blue – provide storage for dry goods and small appliances. Reinhart used saturated blocks of colour, including an orange subway tile backsplash, yellow panelling and orange accents throughout not only maintain the gleeful vibe, but bridge the palette with tempering elements, including European oak floors and white walls.

The rest of the home takes its cues from the kitchen. Against the foyer’s stark white walls, the main staircase – a survivor of the reno – was given a teal ombre treatment, while the living room, also painted white, features splashes of orange, fuschia and, behind the rebuilt fireplace, a dark garnet chosen to match details in the home’s original stained glass windows. Upstairs, the kids’ bedrooms and bathroom are splashed with yellow and teal, while Flor carpet tiles, wall hangings and select pieces of furniture fill out the basement living room and play area. With matte finishes and black hardware lending a gloss of sophistication, the colour pops, but isn’t out of control. “It was a lot of juggling to get it right,” says Asquith. Given the home’s circus of colours, “juggling” is an apt metaphor.