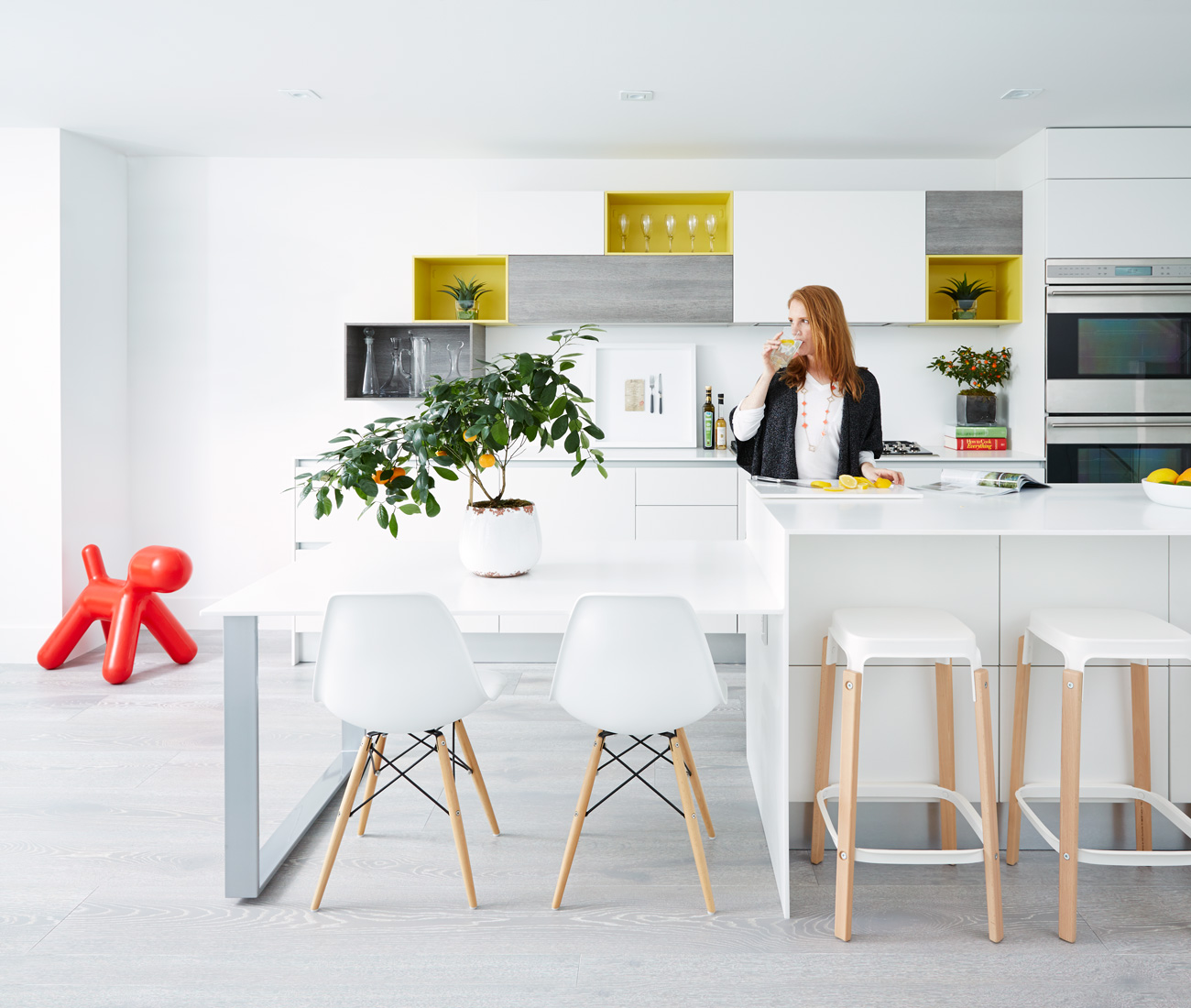 The Scavolini kitchen boasts an island and counters topped with thin slabs of Corian; chairs from Design Within Reach. Photo by Naomi Finlay. 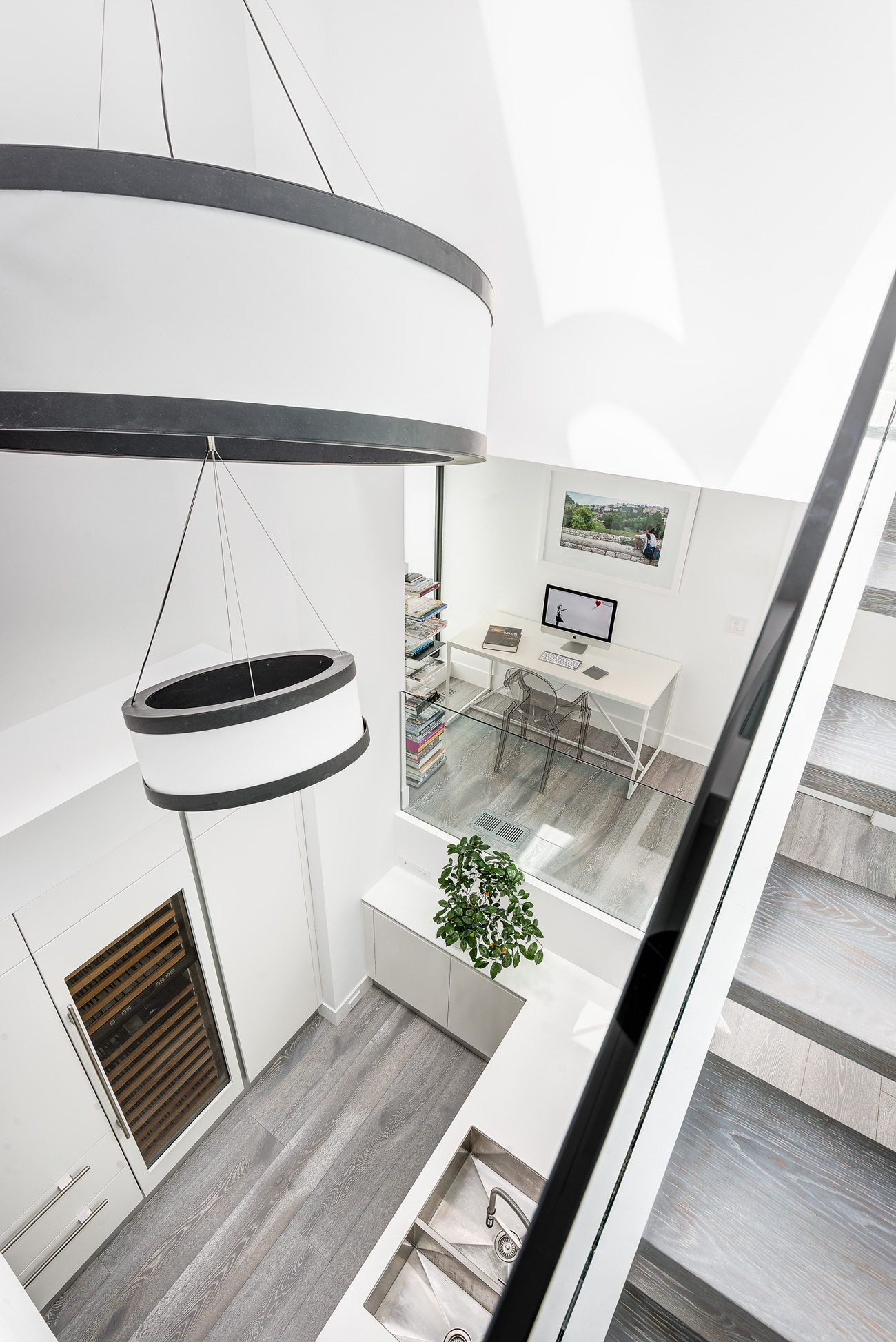 A home office is situated just above the kitchen. Bleached oak from Relative Space/Floorworks runs throughout. 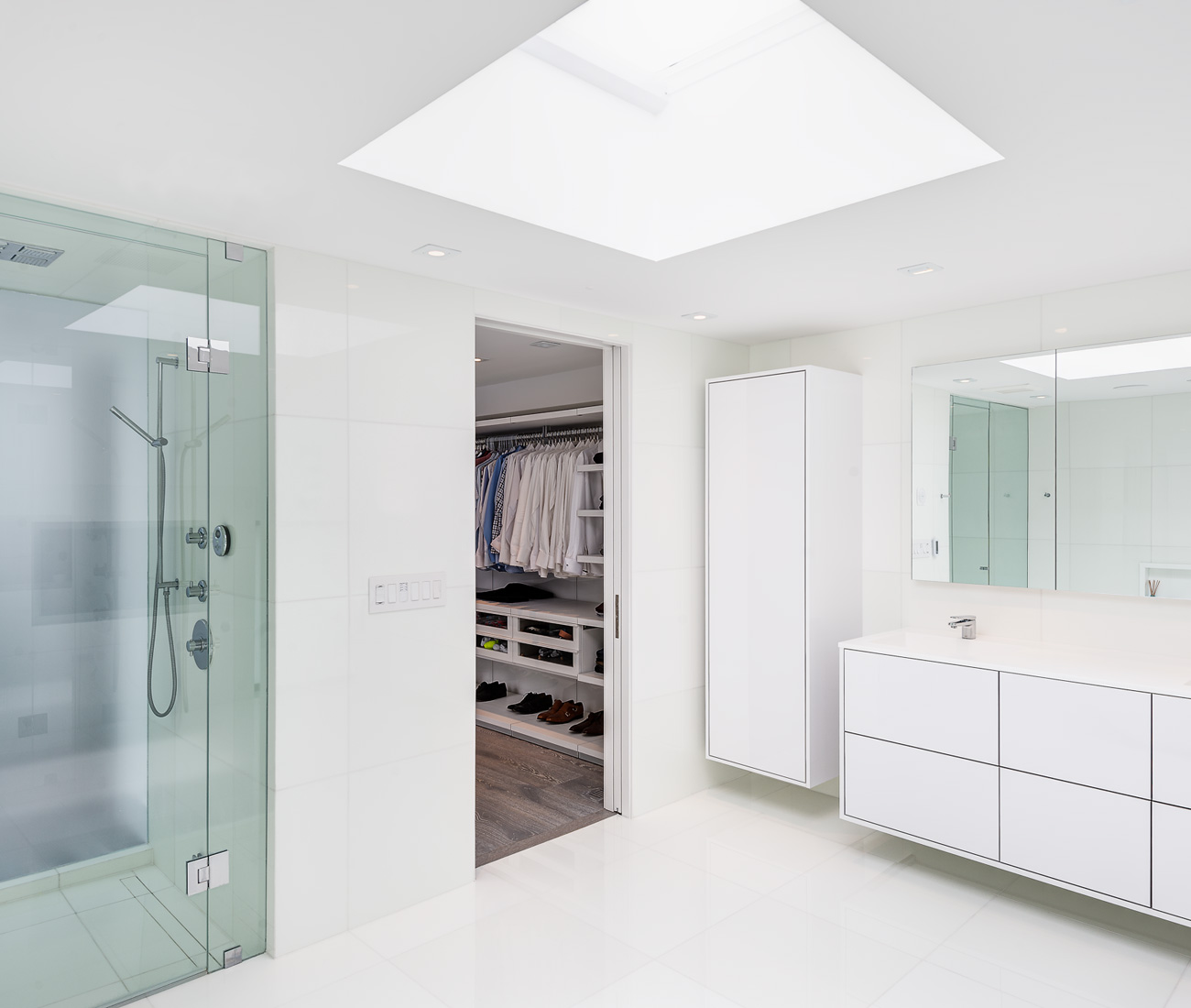 The master bath features a walk-in shower, a Poliform closet and a custom vanity. Floor-to-ceiling quartz tile from Stone Tile. 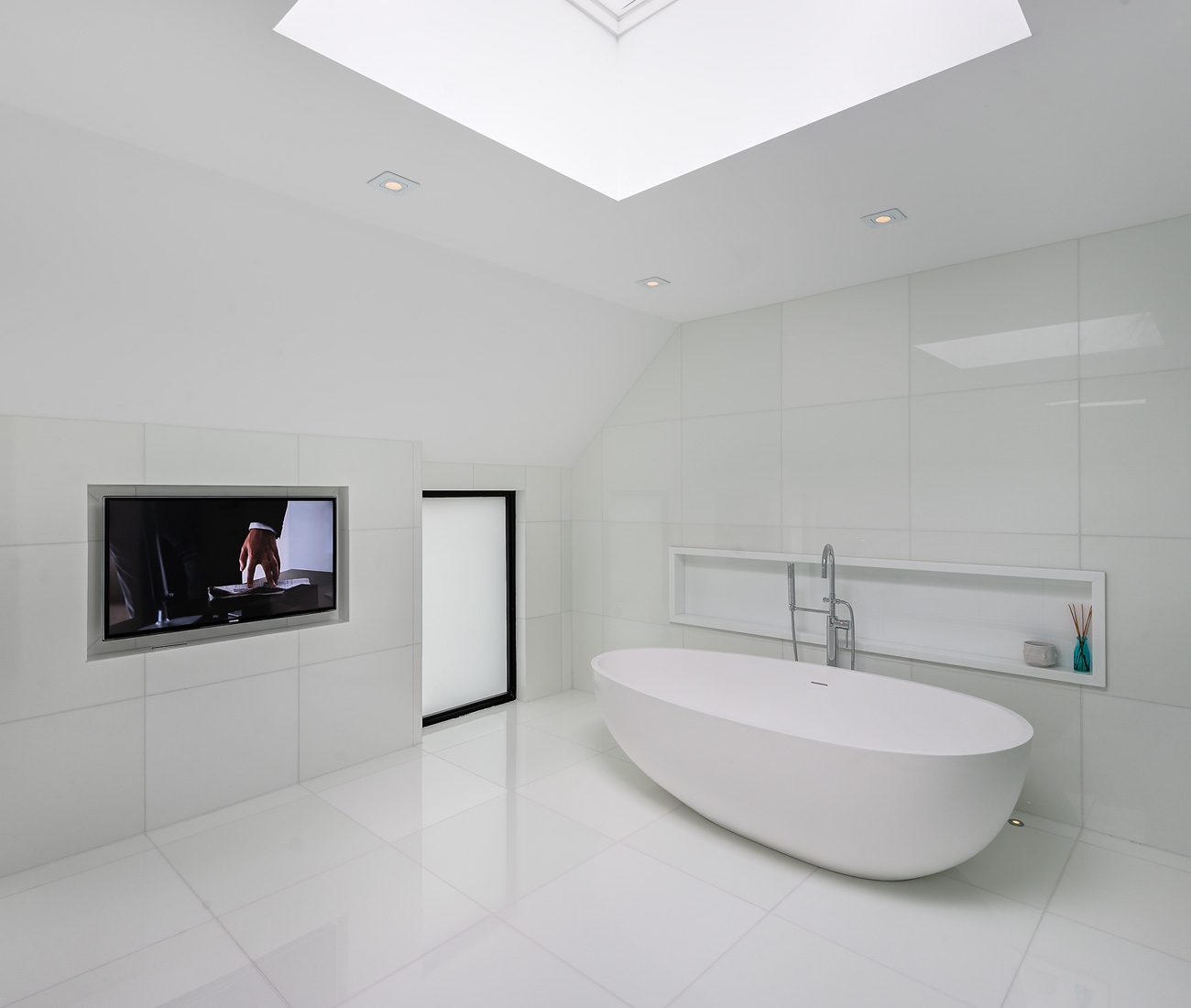 The master bath features a walk-in shower, a Poliform closet and a custom vanity. Floor-to-ceiling quartz tile from Stone Tile; soaker from Ginger’s. 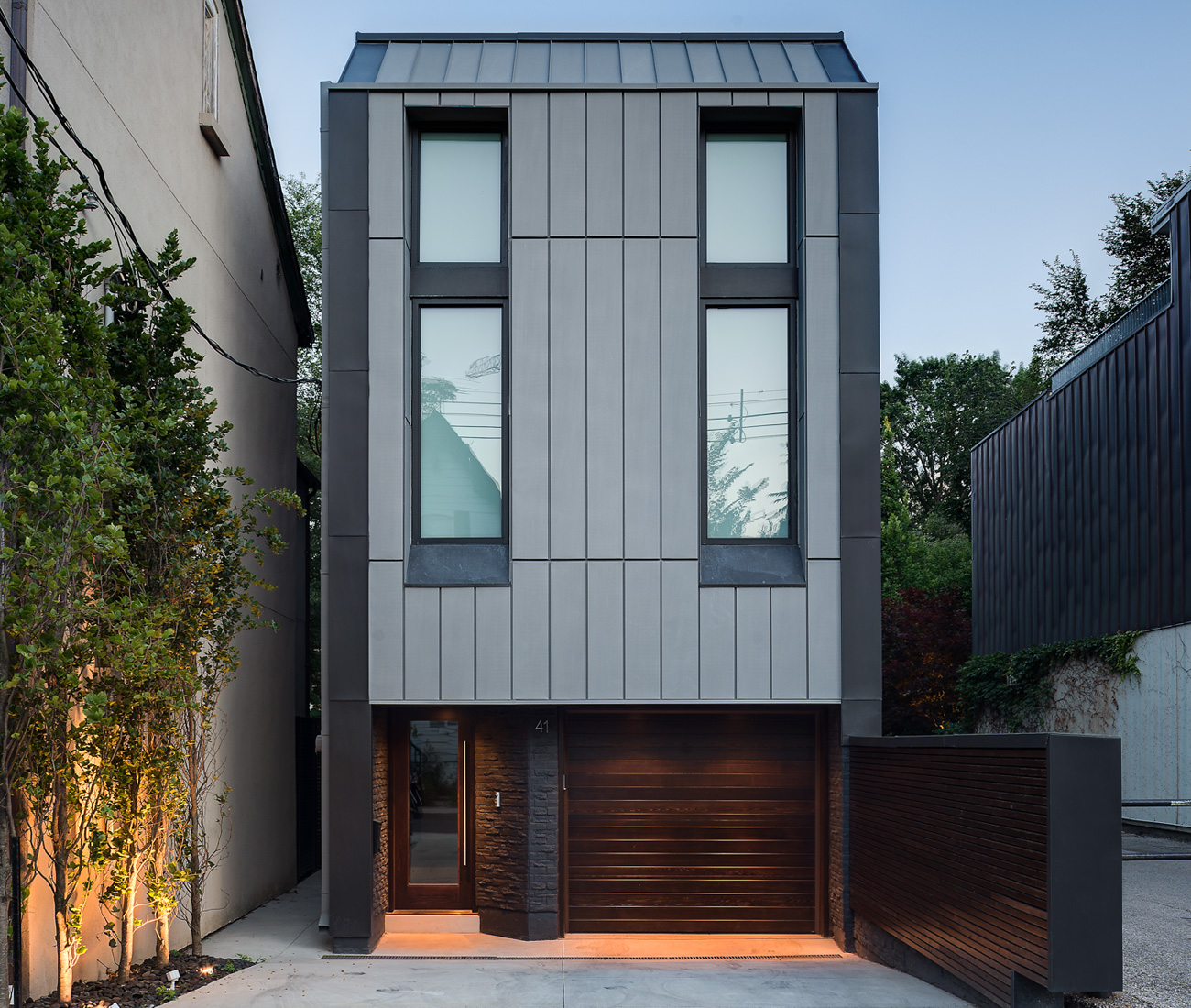 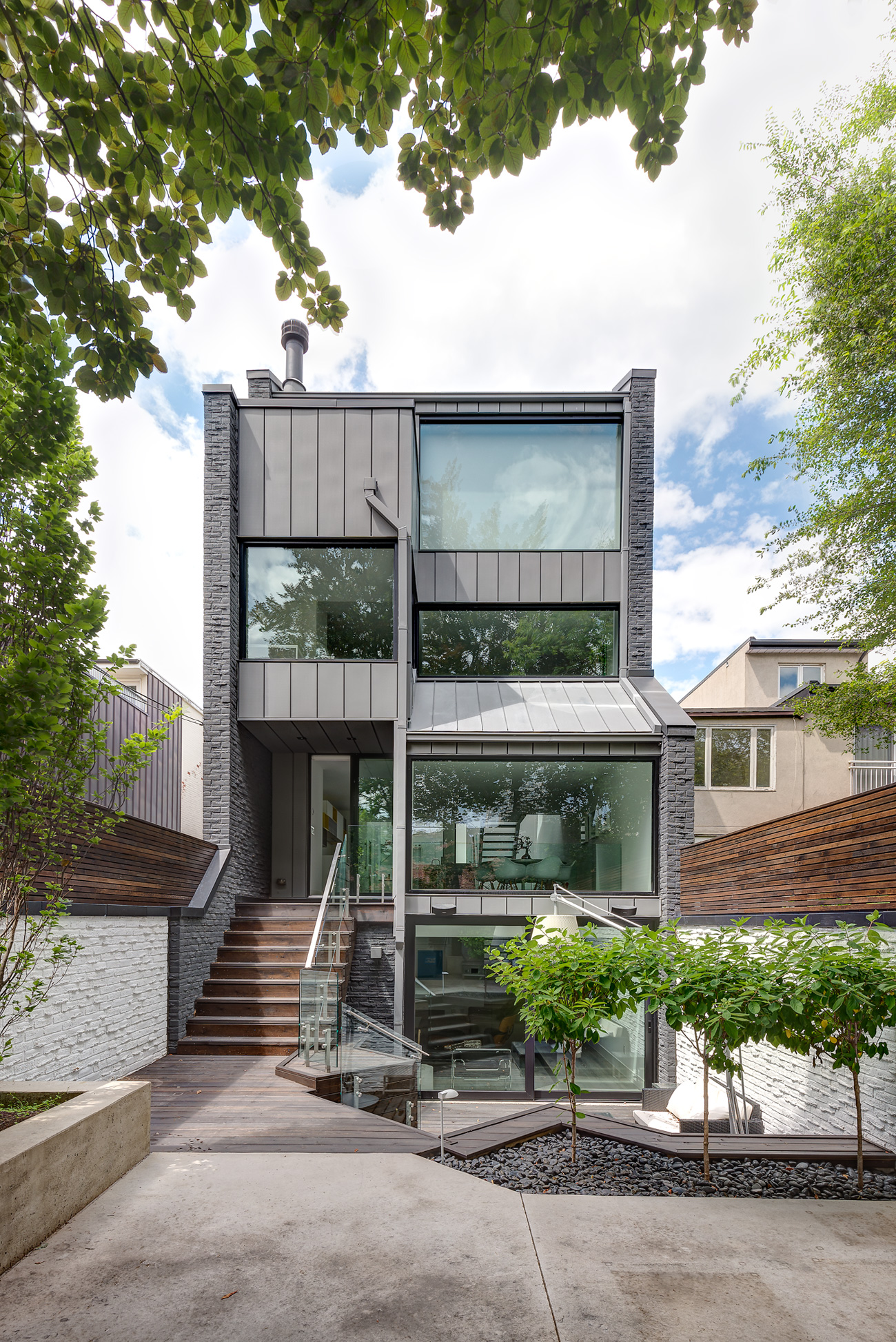 Audax Architecture landscaped the 71-square-metre outdoor living space using poured concrete and stained cedar. The basement has a walk-out patio, and there is a private deck off the master bedroom.
Share Tweet Pin Email Print

By Matthew Hague
Photography by Naomi Finlay and Arnaud Marthouret

Jonathan Goldman was being diplomatic when he described to me the pre-reno look of his three-bedroom, late ’70s home. But the technical term is ugly.

The real estate developer bought the 345-square-metre place in 2012, because the rare boxy modern in Yorkville – packed as it is with historic Victorians – was irresistibly unique. But it wasn’t in great shape. From the front, it was like a giant, blank stare, with one sad strip window cut into a swath of beige siding. Inside, the original open concept floors were dark and cluttered, particularly in the basement and the kitchen. The potential was there, though, and now, nearly 40 years on: seven split levels, all cascading around a central staircase towering up through a sun-filled light well.

To return the home to its original glory (and beyond), Goldman hired Audax Architecture and principal Gianpiero Pugliese – a Harvard-educated architect known for such historically sensitive, contemporary updates as the redevelopment of the Shops of Summerhill. The project was managed and built by Zach Goldstein of GreenGold Construction Ltd.

Pugliese derived his concept — “a dark shell with a bright, white centre” — from the original ’70s design, a monolithic exterior filled with airy interiors. Accordingly, the final result has pleasing contrasts. A second vertical window was added to the exterior, which is now clad in dark-grey zinc. The vestibule is also purposefully dark and lined with stained cedar slats in a rich brown. It makes for a compressive sensation as guests push through the main entrance into the ethereal sky-lit, all-white front hall. Each of the home’s seven levels has its own program, which allowed Pugliese to clear out the unnecessary, choppy partitions that clouded the original vision.

Down a half-flight from the front hall is the 43-square-metre main living area, with a walk out to a sunken backyard; while up a half-flight is the light-filled Scavolini kitchen and eating area, gleaming in Corian and with a bold feature wall.

The modern redesign really takes hold on the upper floors, where a capacious sleeping area at the top is resplendently spare, with little more than a bed, sitting space and private deck. “I’m the kind of person who could really have one or two pieces of furniture per room,” says Goldman. And perhaps the most striking room in the house is a massive, bright ensuite with shimmering quartz walls, which are emblematic of the home’s timeless simplicity and will easily last through the next 40 years.

Originally published in our Spring 2015 issue as Box Star.