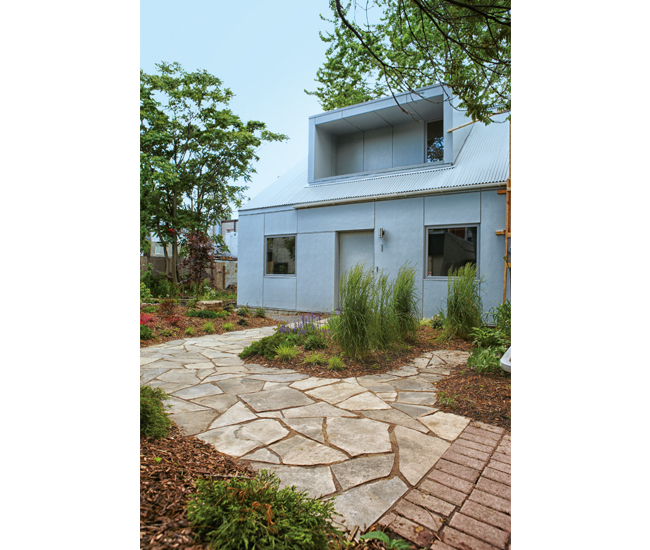 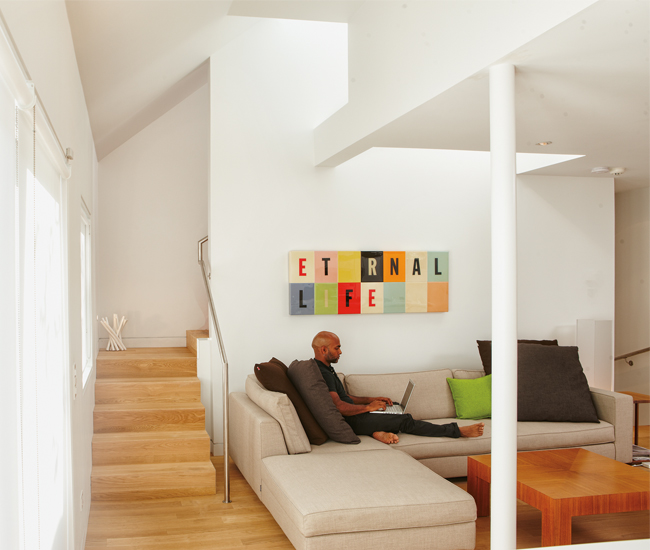 The ground level’s dropped ceiling opens up to a skylight. Minotti sofa from Italinteriors; artwork by Douglas Coupland. 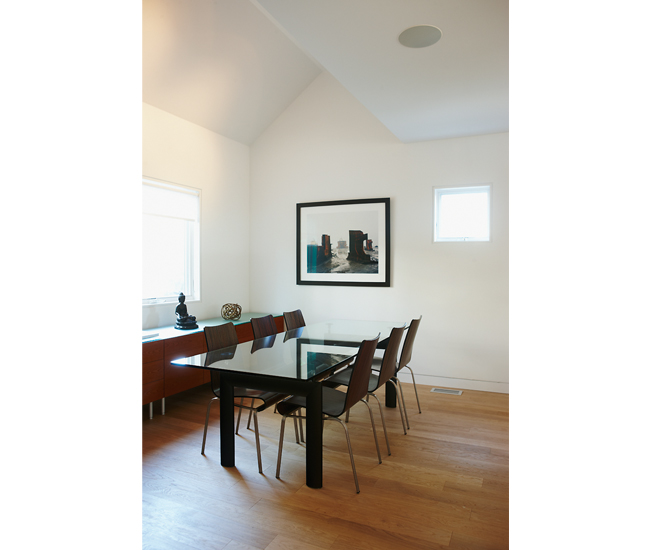 In the dining space is a Molteni & C credenza from Italinteriors and a Le Corbusier table by Cassina from Palazzetti. 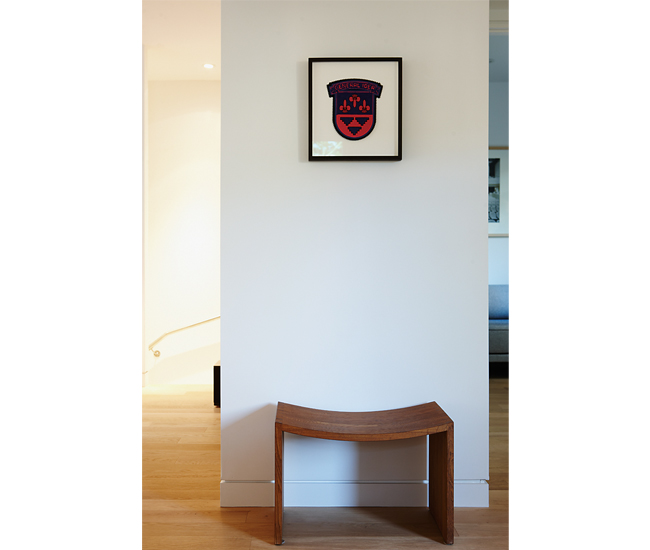 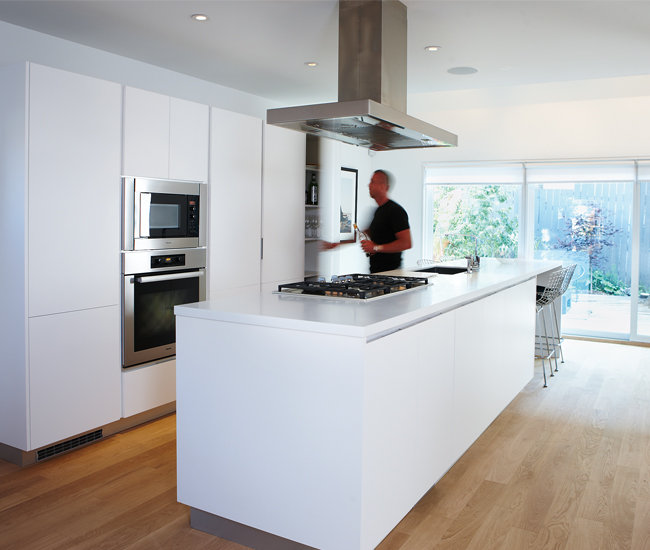 The matte lacquer cabinetry and Corian-topped island is from Olympic Kitchens. A sliding glass door leads to the patio. 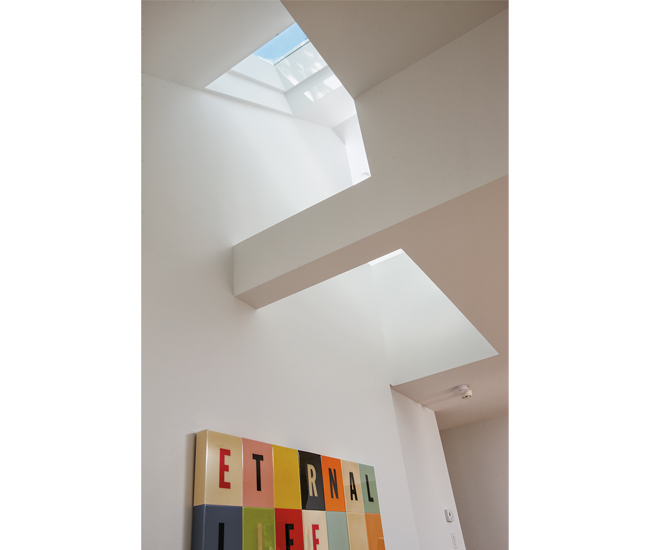 Architect Meg Graham’s obsession with “ceiling-scapes” is evidenced by the impressive shadows that are cast throughout the house. 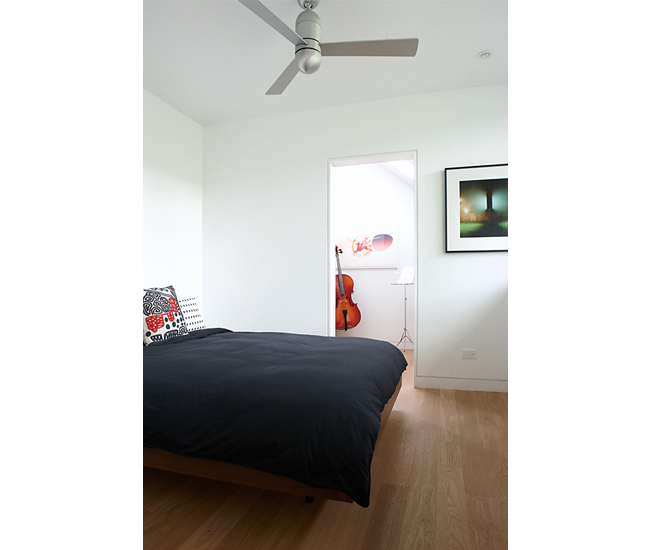 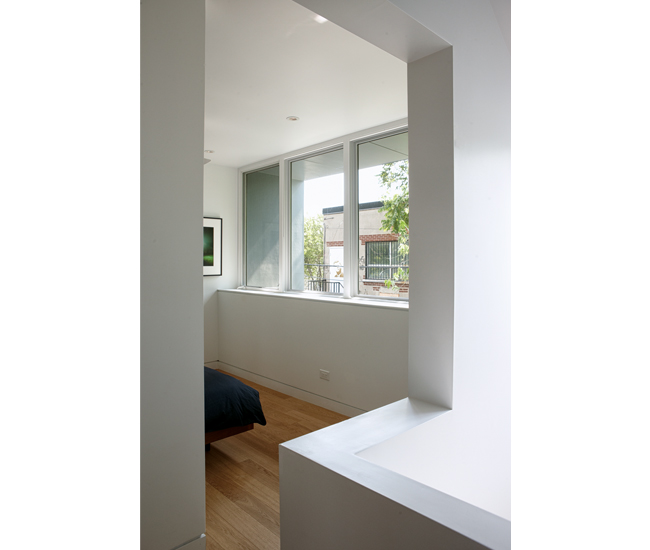 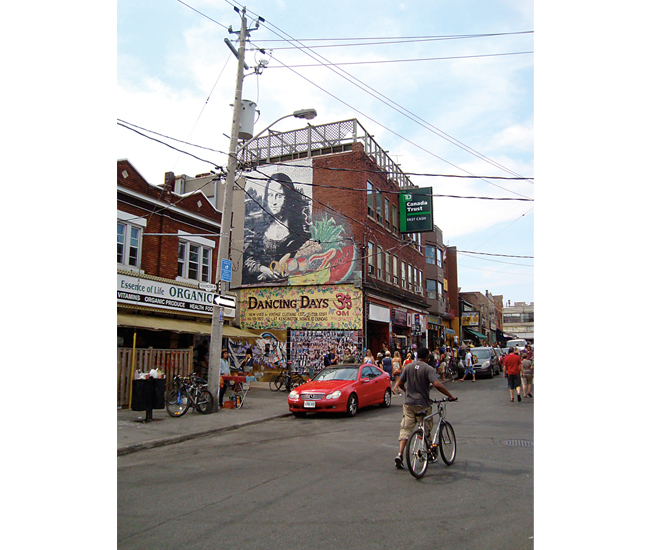 It’s not easy to find. In fact, you won’t even locate it on Google Maps. But when this tiny abode appears, if you happen to stumble down the right laneway, it brings to mind Tardis, Doctor Who’s space-warping time machine.

Beyond the exterior, an understated cladding of grey cement board, the most striking feature is a dormer above the front door that overlooks a flagstone path surrounded by native and Japanese plants. Unmistakably modern, the house is in fact built on the same footprint as the 1880s worker’s cottage that was gutted by a fire in 2007.

Flash forward to 2011, when Andre D’Elia, Meg Graham and Deborah Wang, architects at the local firm Superkül, were asked to reconstruct a tiny home and include more living space, though without building up. Best known for their laneway houses and storefront makeovers, the firm decided to take on the project even though the budget and schedule were tight, with only one year to design and build it. Graham was drawn by the project’s ambition, even though, she admits, it was a bit of a challenge.

Early on they dubbed it the Origami House, and indeed, space unfolds in unexpected geometries throughout the paper-white interior. In keeping with Graham’s obsession with “ceiling-scapes,” what’s above is as well considered as what’s on the floor and walls. As you walk inside the house, the dormer makes its presence known. What appears to be a bulkhead is actually the second level dropping into the first floor, lowering its ceiling by a few feet. But further inside, a skylight brings the sun right into the open living space, casting angular shadows across the walls. Sparsely decorated with modern furnishings and Canadian art, the adjoining kitchen leads to the backyard’s intimate patio.

Upstairs, the dormer is used to full effect, illuminating the bathroom and master bedroom. These doorless rooms are interrupted only by a jog in the hallway, so there is rarely a full view into any space. In the study off the bedroom, a perfectly square window allows just a glimpse of the top of a silver maple that has presided over the lot for more than a hundred years. “We wanted to pay homage to the original property and to the community,” says one of the homeowners. With its 21st-century style on a century-old foundation, this beautiful, tucked-away house does just that.

Originally published in our Fall 2012 issue as In the Fold. 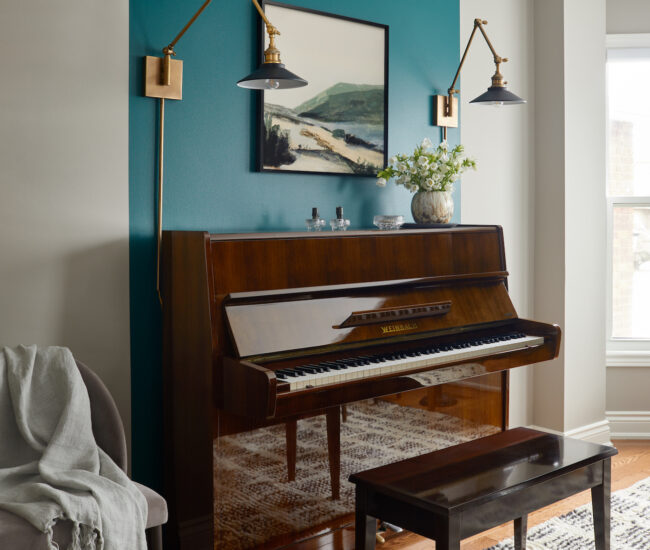 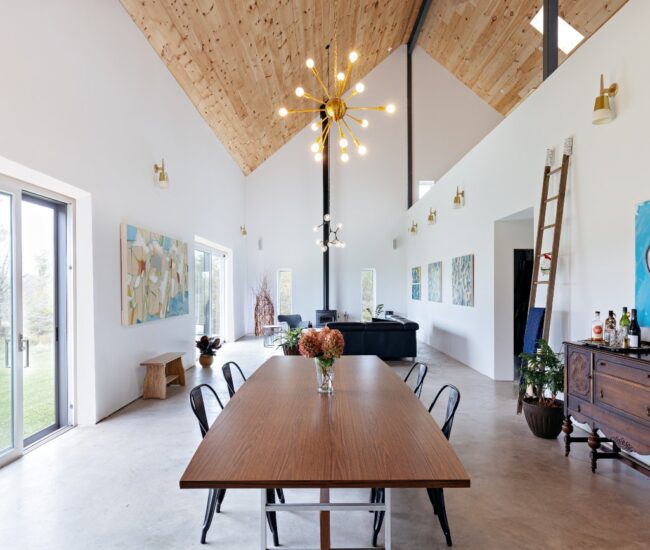