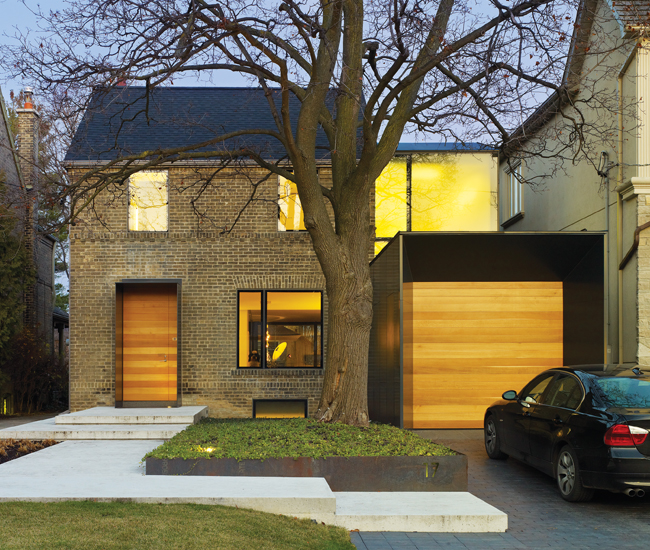 Once upon a time, there was a little yellow-brick house on a great big lot near Avenue Road and Lawrence. Built in 1940, it had three bedrooms and tiny windows; when it sold in 2007 to a builder of high-end homes, it could have been bulldozed to make way for a new stucco château. But although it has been completely transformed from the inside out, the gabled box remains.

The windows are tinted grey glass with aluminum frames seamlessly joined to the brick facade. The doors are lustrous white oak, and lurking beyond the garage is a tall, translucent glass curtain wall indicating a bold, contemporary design. This is the work of designers Kevin Bridgman and Paulo Rocha, both now associates at Kuwabara Payne McKenna Blumberg. The two spent most of their weekends and evenings in 2008 developing strong spatial moves and a carefully edited material palette for the project.

The result is an interior that’s minimal and expansive. When you walk in the front door, you can see at a glance nearly the entire ground level: rift-cut white oak flooring and millwork; grey drywall; white cabinetry and Corian in the kitchen. Look up and you’ll see a white aluminum-edge trim on the ceiling, made by Viabizzuno, which delineates the dining area and traces the footprint of the old house. The new open-concept kitchen, living space and library extend from the original framework out toward the backyard.

From the back, it becomes clear how the designers managed to double the house’s size to 230 square metres: an aluminum-and-glass addition wraps around the back of the building and along its south side, and a second-floor extension cantilevers boldly over the back deck. The home’s viewfinder form is similar to the award-winning Gardiner Museum, a project that both Bridgman and Rocha worked on. It also shares with the museum a typically KPMB vocabulary: hardware-free glass partitions and knife-edge details in the concrete work and metal – all built by the owner’s construction company. Rocha describes the client as “a millimetre man.”

For people who like gabled houses, this home might not seem domestic enough. “We wanted something museum-like,” says the homeowner. “Crisp, without clutter.” For Rocha, that was ideal. “You rarely have a client make that their starting point,” he says, “and that allowed us to do what we do.” For everybody, it’s a happy ending.