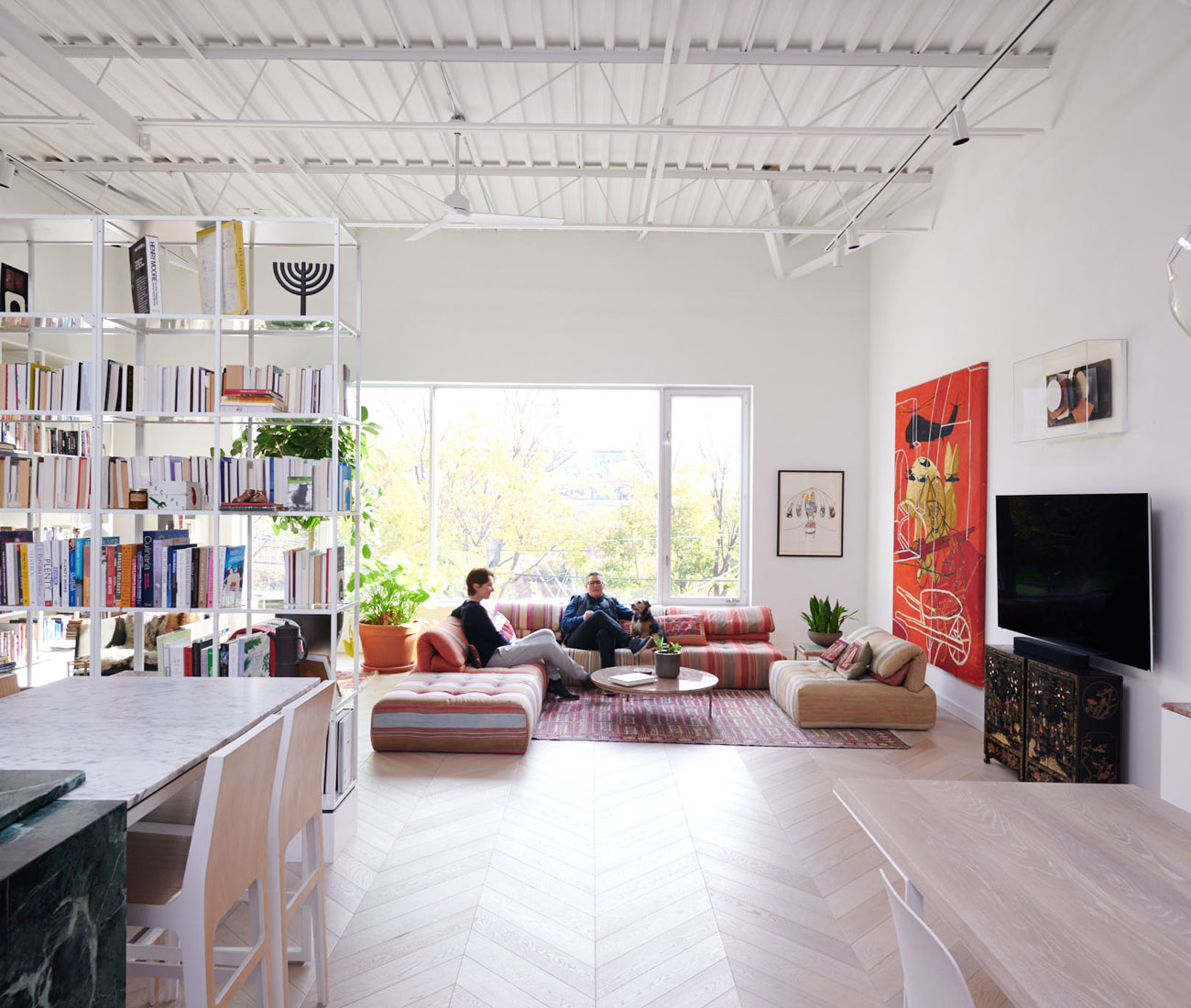 High-end design, hacked Ikea, custom pieces and clever repurposing make for both a warm home and an interior design lab for the Public Studio partners. 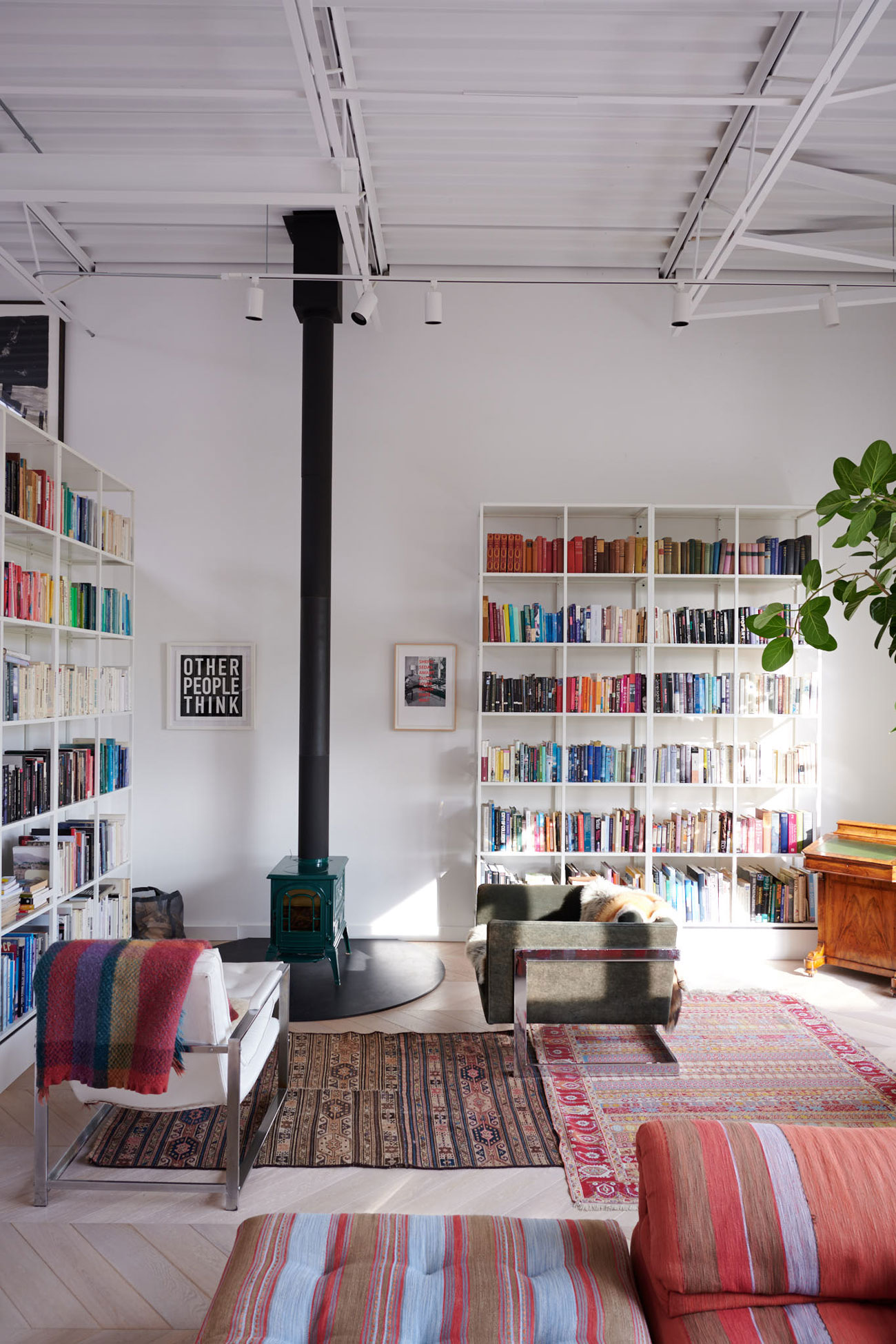 The wood stove in the living room, from Vermont Castings, is surrounded by vintage rugs and armchairs bought in an East Jerusalem market, as well as a colour-coded library. 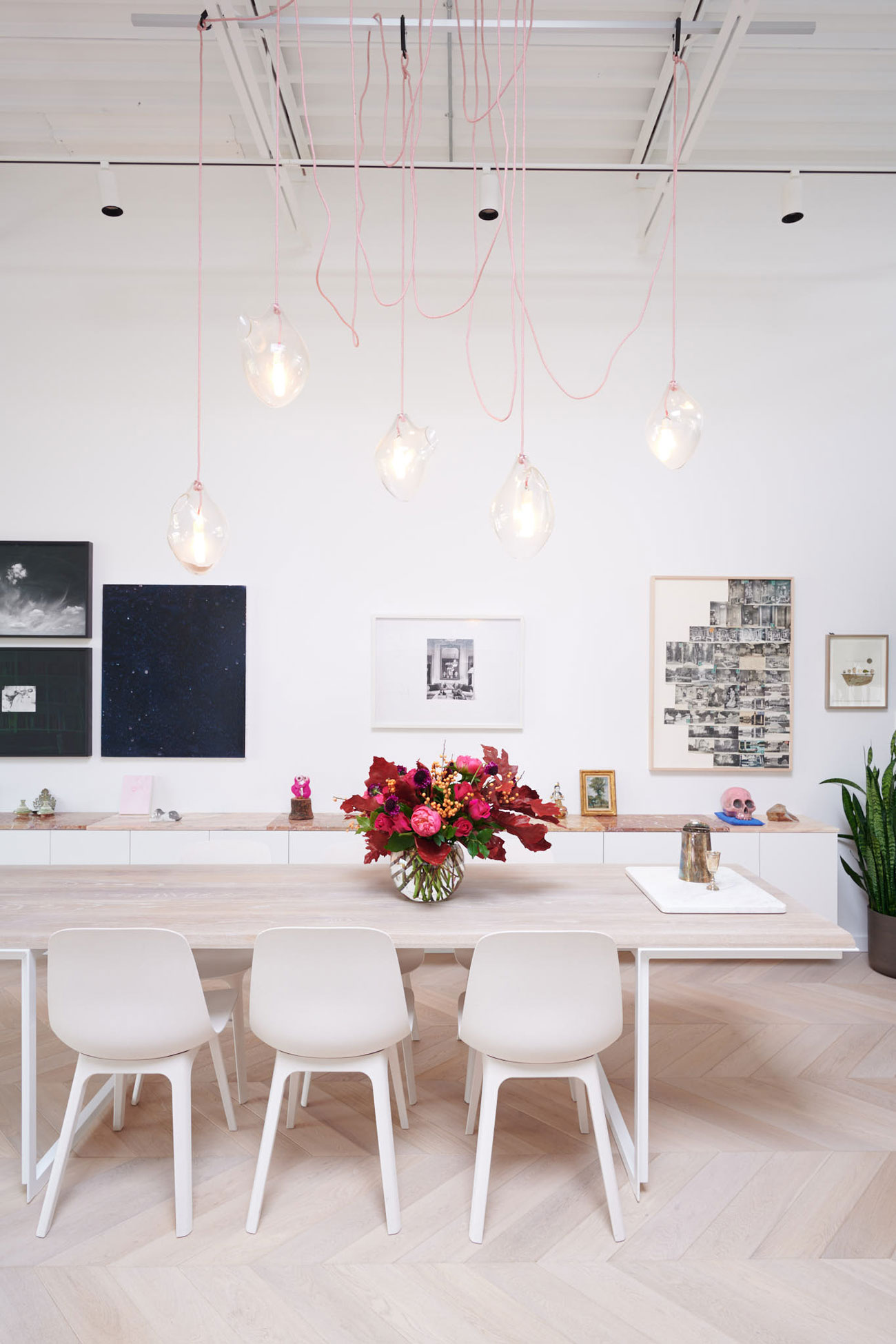 Shaun Moore, neighbour and owner of Made Design, created the white oak–topped dining table, a material match for the parquet floor. 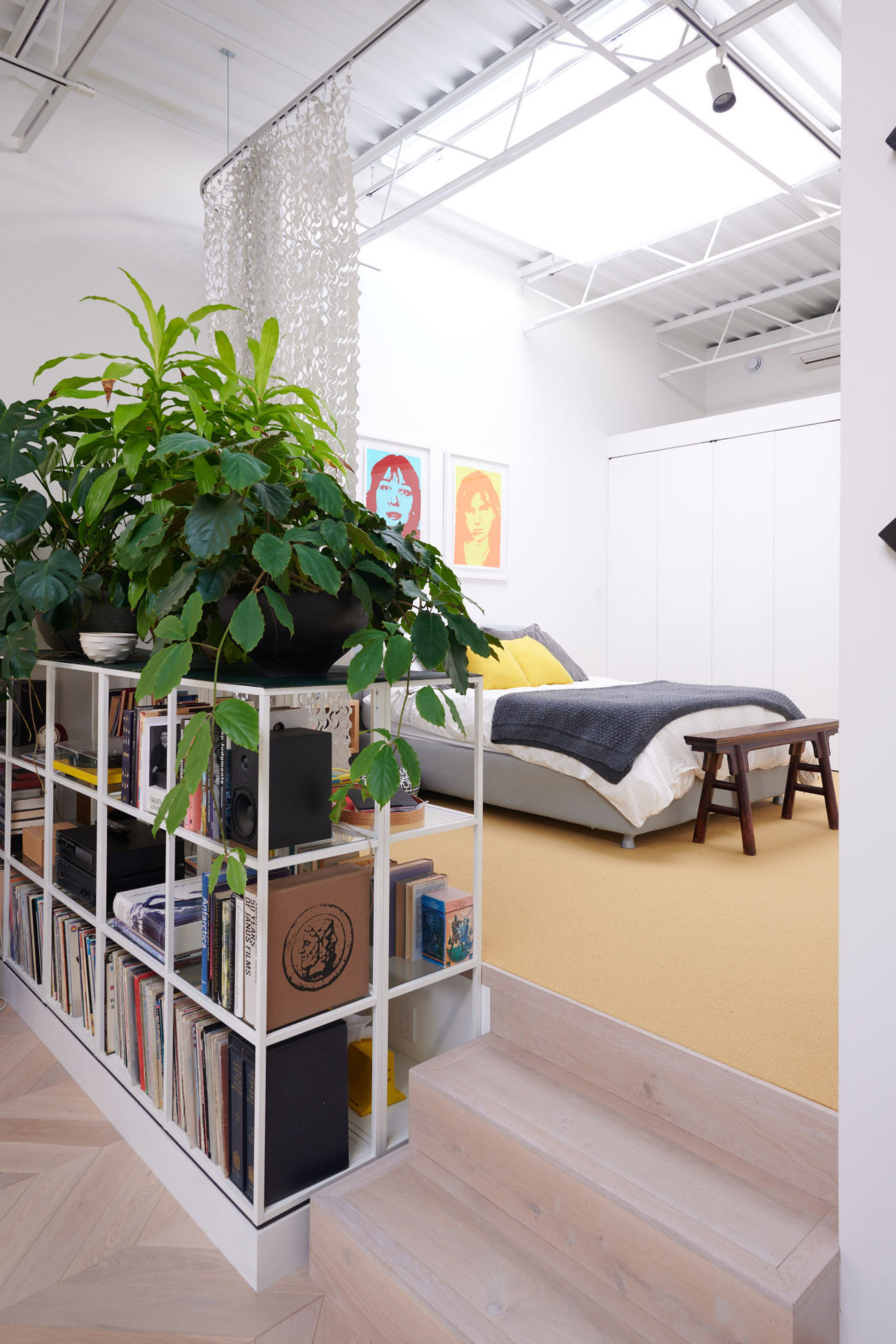 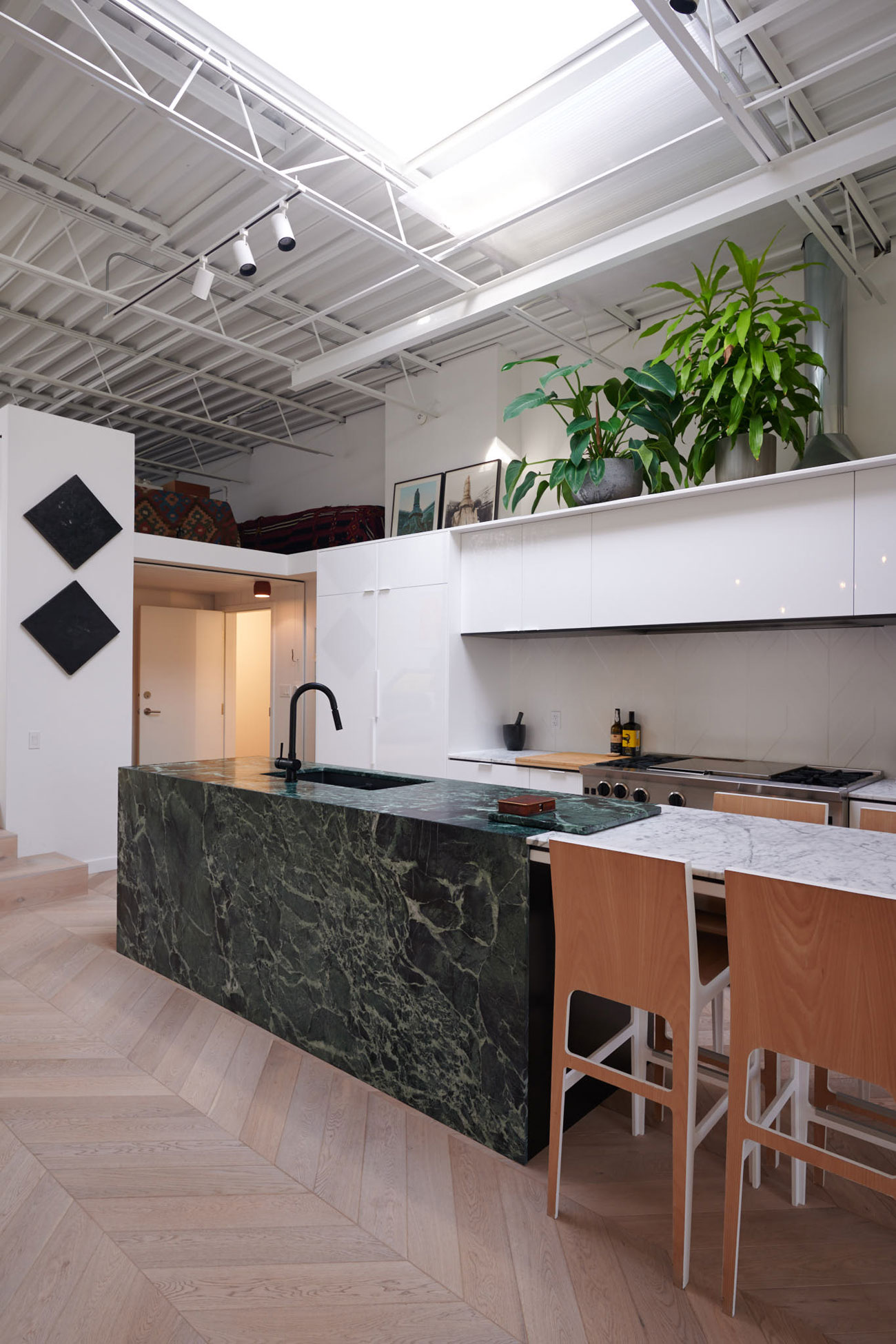 Contrasting slabs of green and white marble from Olympia Tile+Stone make up the focal point of the kitchen. The stools are from Made. 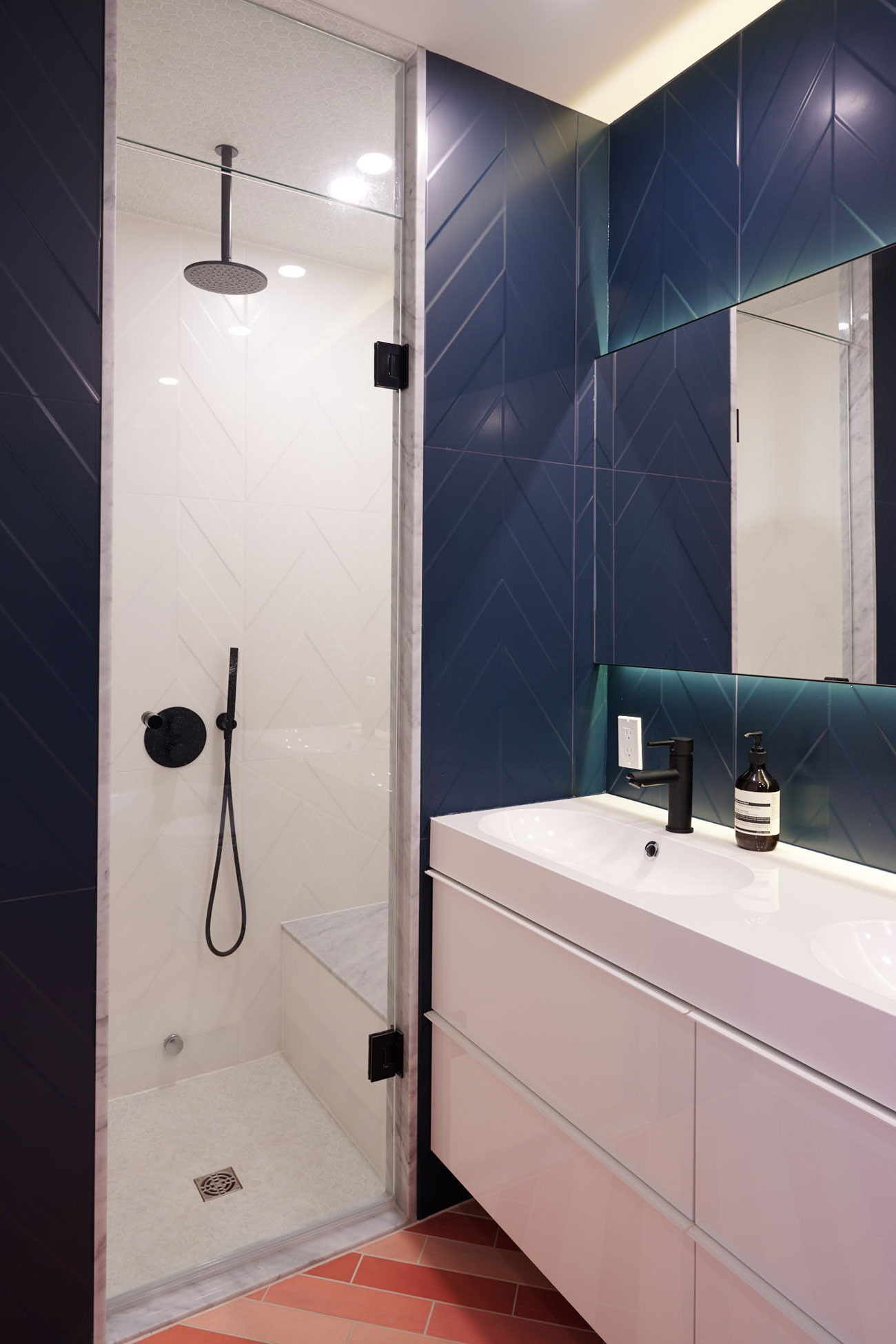 The herringbone wall tile in the master bathroom is by Céragrès. Matte black Lusso Stone fixtures are a tonal match. 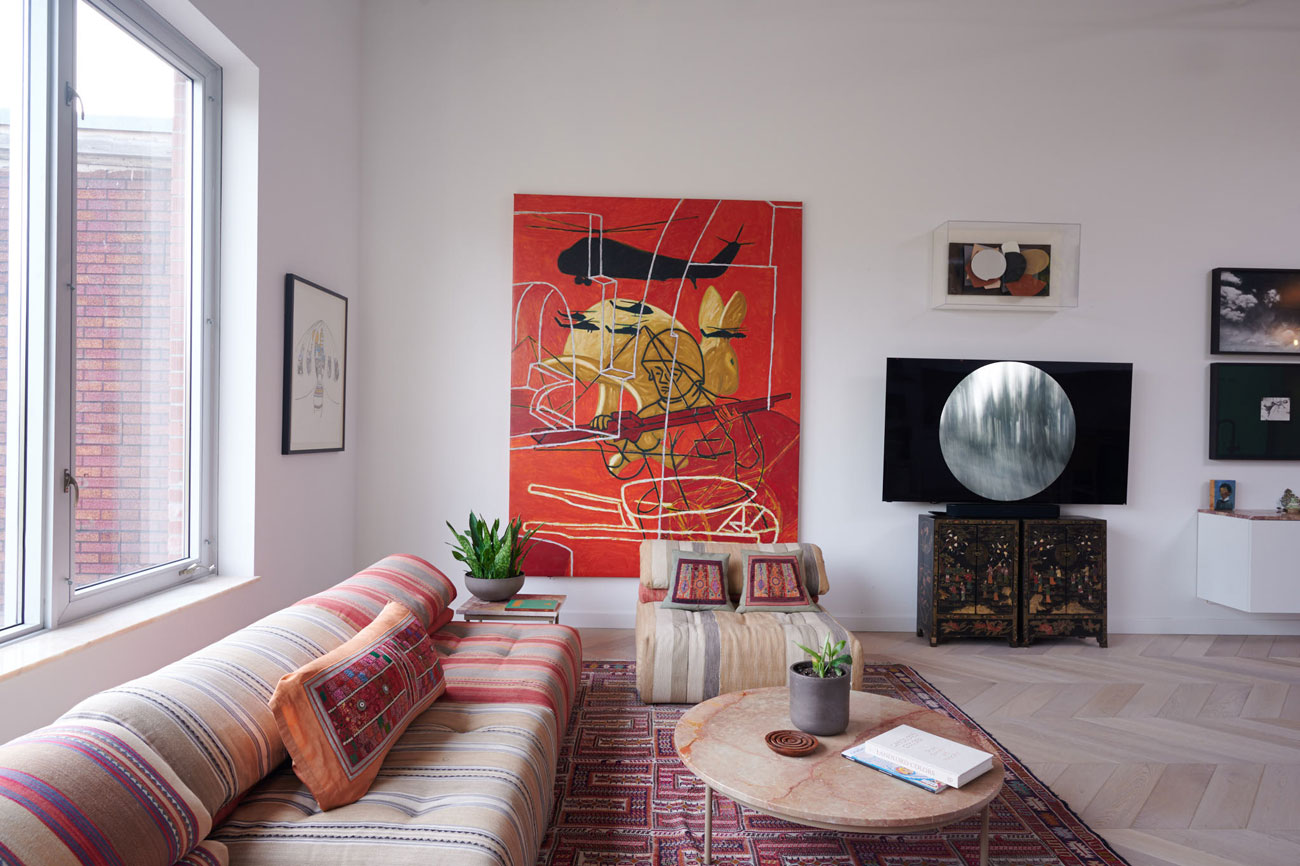 With design studios, a florist, artists’ workspaces and storefronts – and yes, a pair of actual homes – this Geary warehouse will always be a work-in-progress

“I’m always happy to experiment on myself,” says architect Tamira Sawatzky, describing the 140-square-metre open-plan loft she shares with her wife and business partner, filmmaker Elle Flanders (the two run Public Studio, an art and architecture practice). The specific experiment in question is the floor-to-ceiling white camo netting that shields their bedroom. It’s the kind of fabric a hunter hides under to track prey in a snow-covered tundra. Sawatzky used the mesh because it allows light to pass through while maintaining a modicum of privacy, solving a problem common to many factory conversions where the sleeping space isn’t beside a window or enclosed by walls.

Sawatzky could just as easily have been discussing some of the other exercises intended to balance the space’s openness with more intimate moments. The smart use of open-frame bookshelves, for instance, creates a feeling of seclusion in a reading lounge while also allowing sun to filter over the tomes and into the kitchen.

The word “experiment” could also describe the couple’s whole approach to being. Previously, they lived and worked in a converted metal shop on Dundas West, offsetting raw plaster walls and original signage with slick white cabinetry. Currently, they have embarked on something bolder – taking over an empty warehouse, subdividing it into their second-storey loft with Public Studio’s office below, and renting additional workspaces to artists and storefronts to groups such as Black Lives Matter. It’s also a co-living set-up: they co-own the building with Shaun Moore and Todd Caldwell, who live in a neighbouring apartment and run their own businesses below (retail stores Made Design and Emblem).

Core to their bond, the quartet’s members push each other’s design sensibilities in new and interesting ways. Public Studio designed Moore and Caldwell’s loft, but Moore and Caldwell’s influence is apparent in Sawatzky and Flanders’s space, too. Moore custom-designed the couple’s white oak–topped dining room table and sourced some of their locally made signature furniture, including the chairs around the marble kitchen island and the orb-like chandelier in the dining area, both of which come from Made. The loft’s abundant greenery (potted ferns are everywhere) is supplied by Emblem.

“We’ve known each other for just over two decades,” says Moore. “Co-living might be new, but our friendship isn’t.” That part is tested and proven to work.

Get the Designer: Public Studio