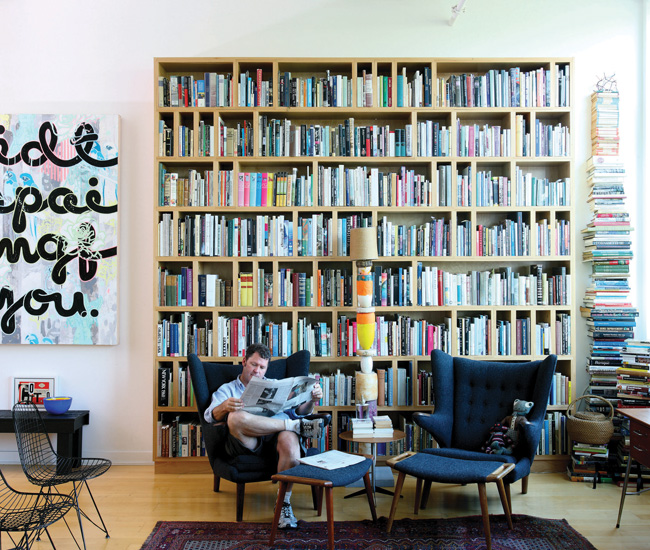 Prokopow estimates he lives with more than 4000 books that cover art, architecture and design history, urban planning, cultural theory, plus hundreds of titles on etiquette, cooking and table setting. The painting on the wall by Emmy Skensved is titled “I did this painting for you.” 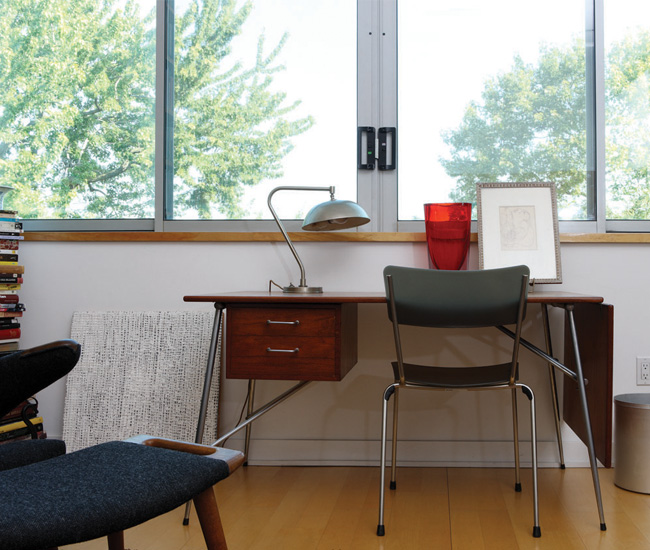 Teak and steelpipe desk by Borje Mogensen (1952); chair by Andrew Jones for Keilhauer; 1940s lamp from the William Campbell Company in Brantford, Ontario. 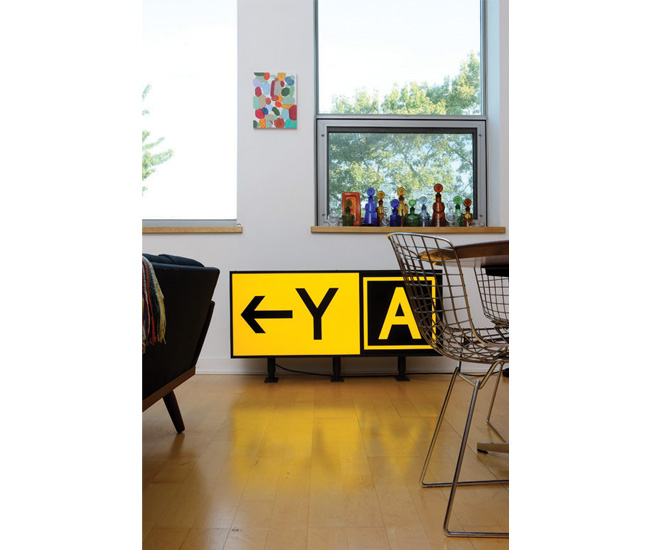 YA lightbox by Toronto artist-architect An Te Liu. 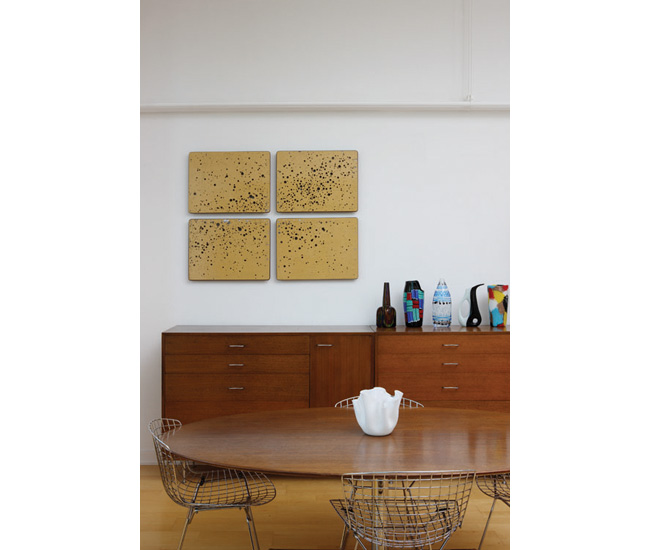 A cluster of postwar Italian glass sits on top of a George Nelson credenza. The art by Christina Meynell is made from four school desktops. 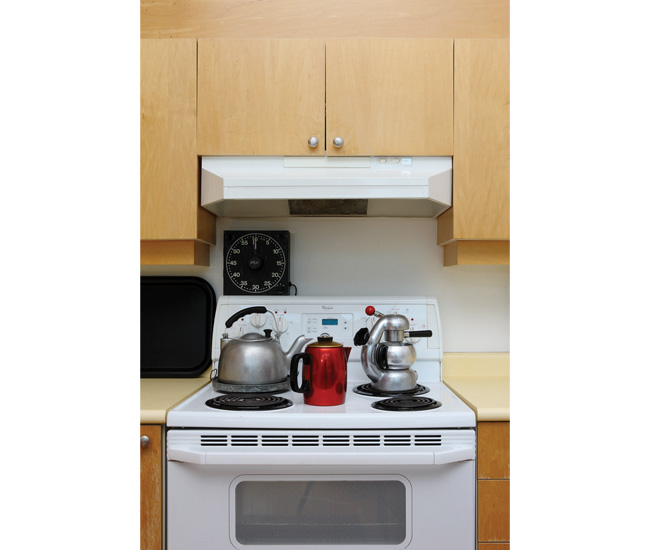 Prokopow finds many of his collectables, like these aluminum stovetop coffee makers, at Goodwill. 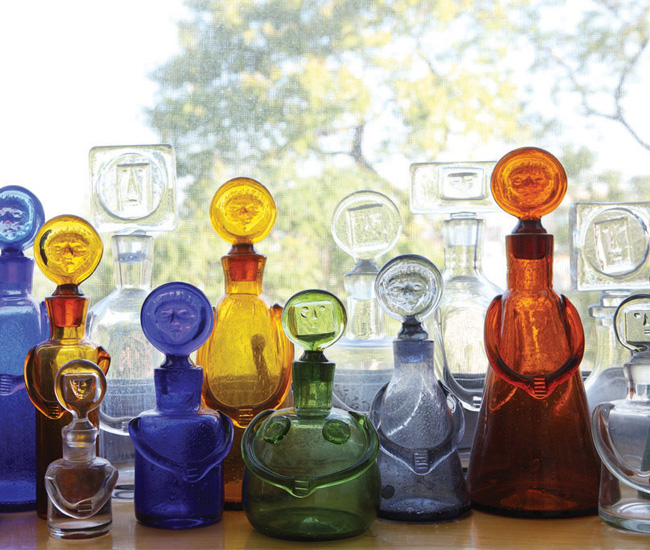 Swedish people decanters by Erik Hoglund and made between 1957 and 1965. 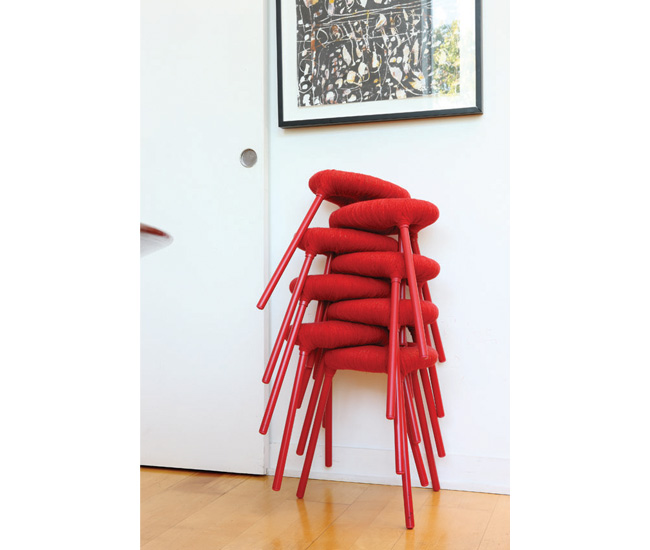 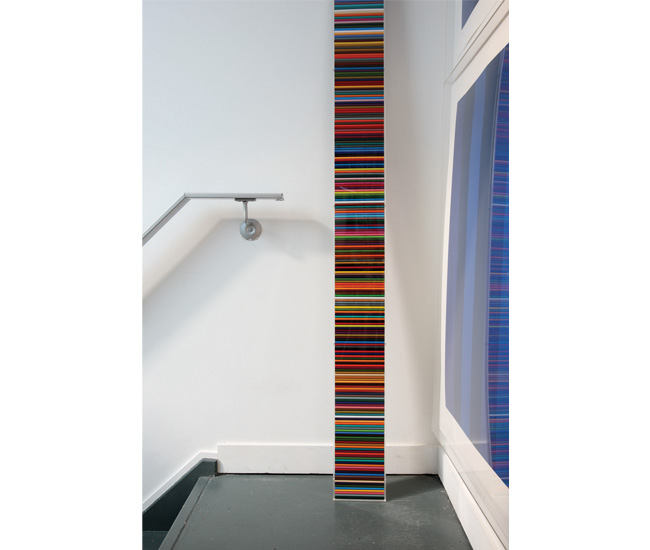 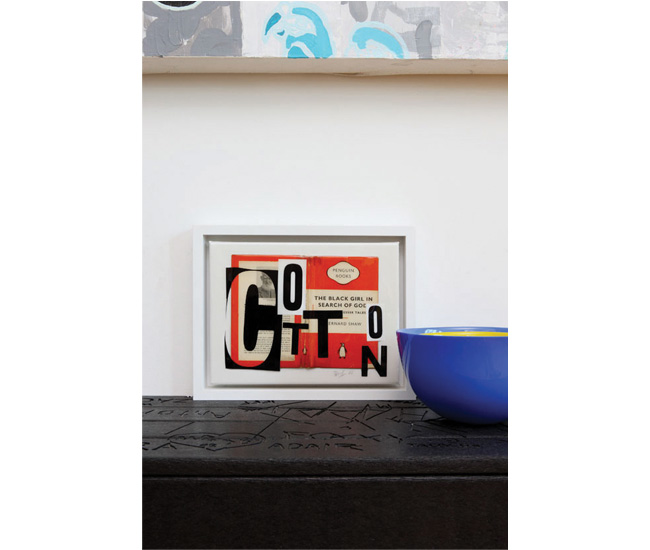 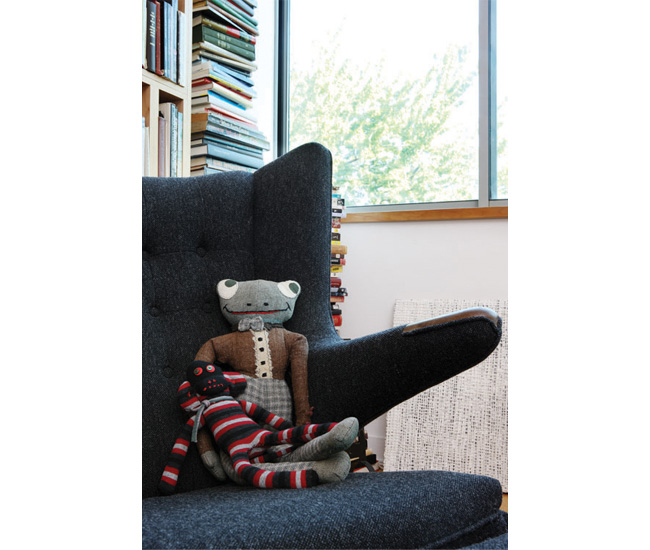 Michael Prokopow’s condo lies on a quiet stretch of Chinatown, just a few steps from bustling Kensington Market. Inside his two-storey loft, the historian has assembled a museum of sorts to an era he favours: postwar modernism of the 1950s and ’60s. “I’ve always acquired things,” says the OCAD U Associate Dean, and former curator of the Design Exchange. “It started with books and rocks when I was a kid,” and eventually grew into a professional vocation. But Prokopow’s easygoing manner belies his encyclopedic knowledge. He’s able to rattle off a detailed provenance for almost everything in his space, from the classic 1956 Eames lounger in his study to the matching Papa Bear winged armchairs by Hans Wegner (1952) in the living area that are dominated by books, art and vintage coloured glassware.

When asked to pull one of his favourite titles from the overflowing shelves and stacks that are piled right up to ceiling, he doesn’t reach for a glossy coffee-table stunner, but a slim, spiral-bound volume with a plastic cover. It’s the original catalogue for the legendary 1949 Exhibition for Modern Living at the Detroit Museum of Fine Arts. “The end of the Second World War really opened up this idea of a realizable utopian future,” Prokopow explains. Most of his furniture was sourced from auctions in the U.S., and he regularly scours sites like Wright20.com and RagoArts.com. But he gets a gleam in his eye when asked where he got a rare jewel-toned Barovier Toso Oriente vase, circa 1940. “Goodwill,” he says with a grin.

Prokopow is an unabashed fan of Value Village, especially its locations in north Toronto, once home to a large Scandinavian population. It’s where he found a gracefully curved Hadeland cheese plate with a milk glass dome. “When people die, their children don’t always know the value of what they have,” he says. “Most people go shopping to buy new underwear. I go for the thrill of the hunt.”

Originally published in our Fall 2009 issue as More is More.