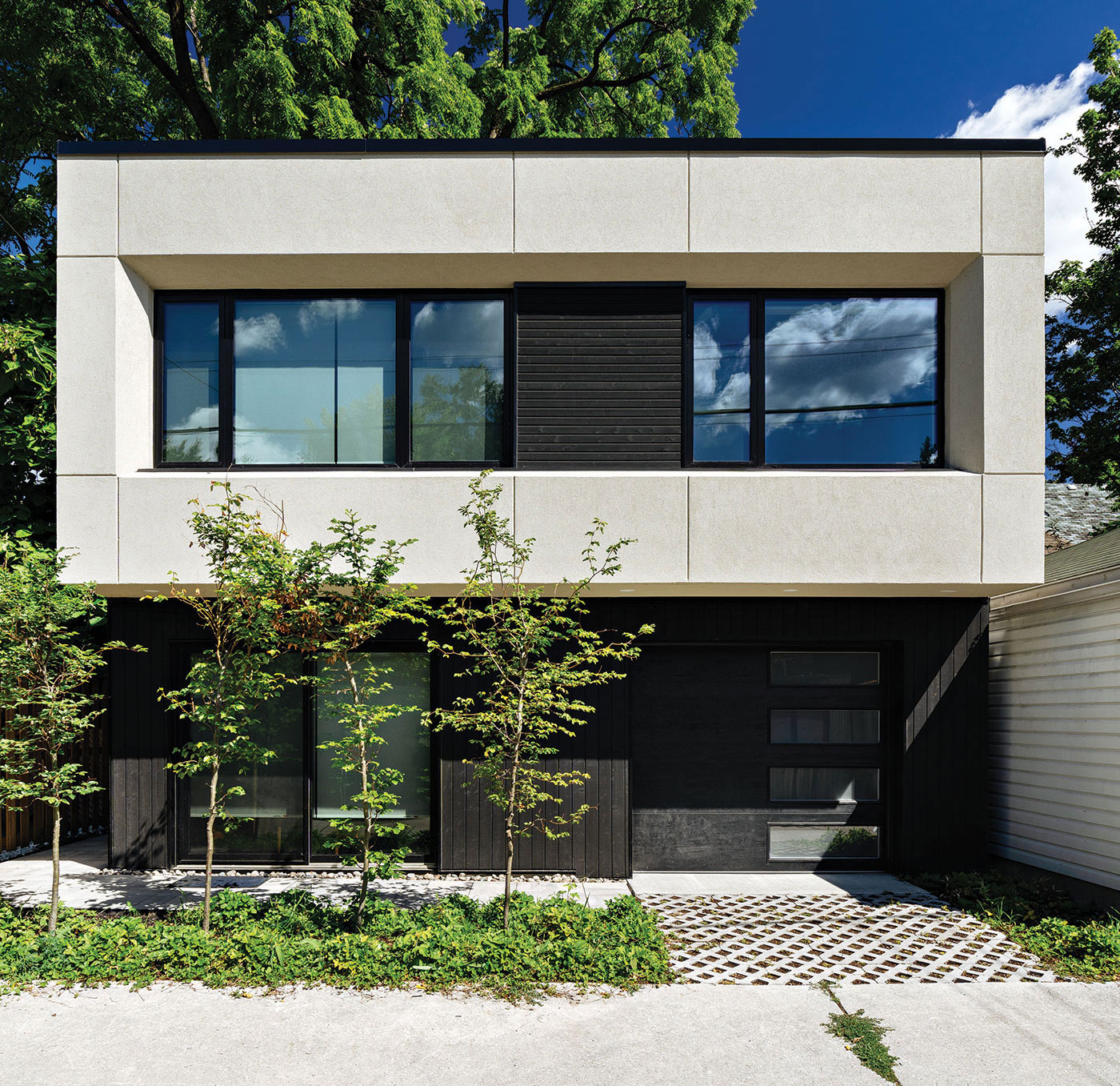 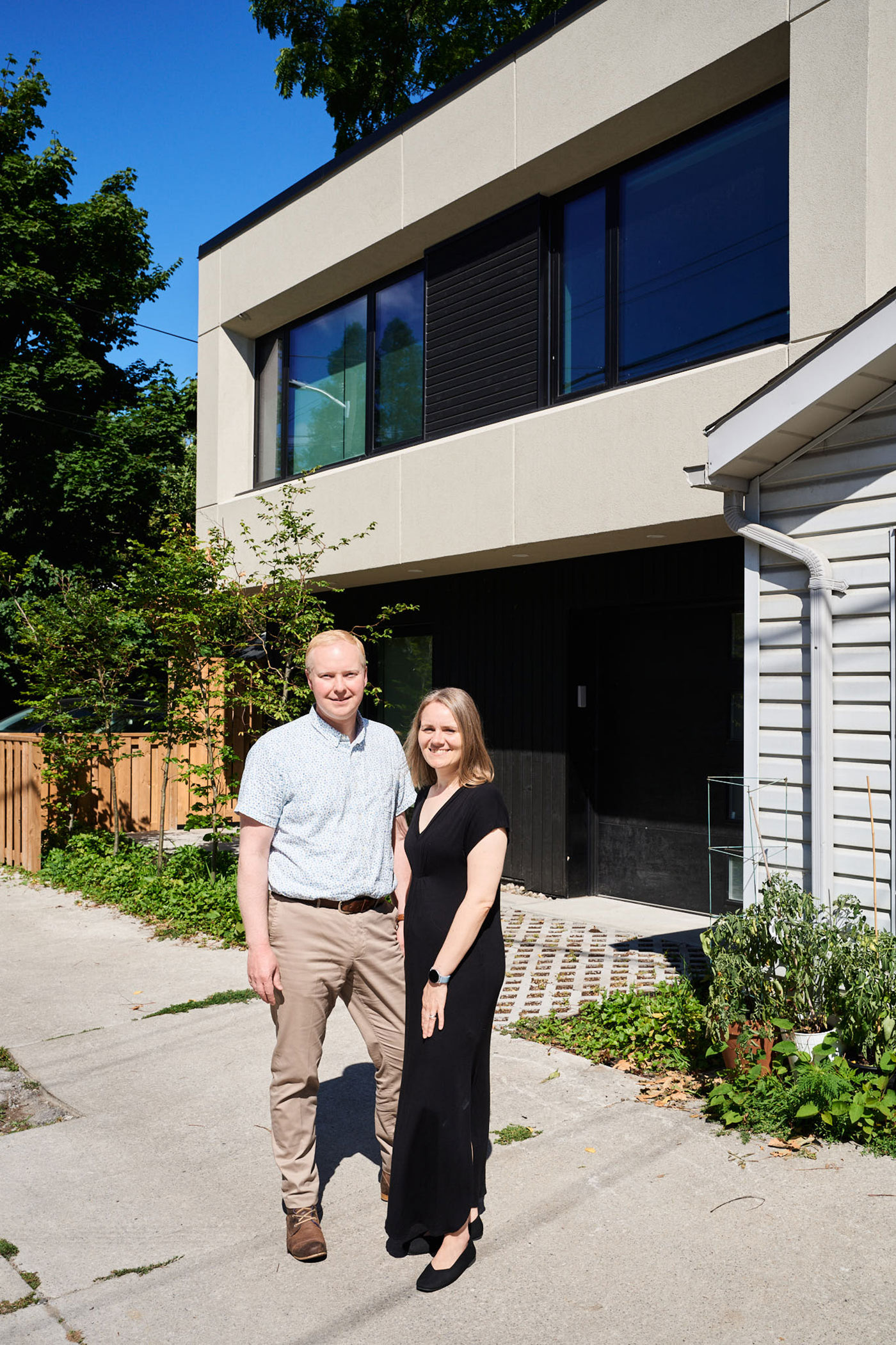 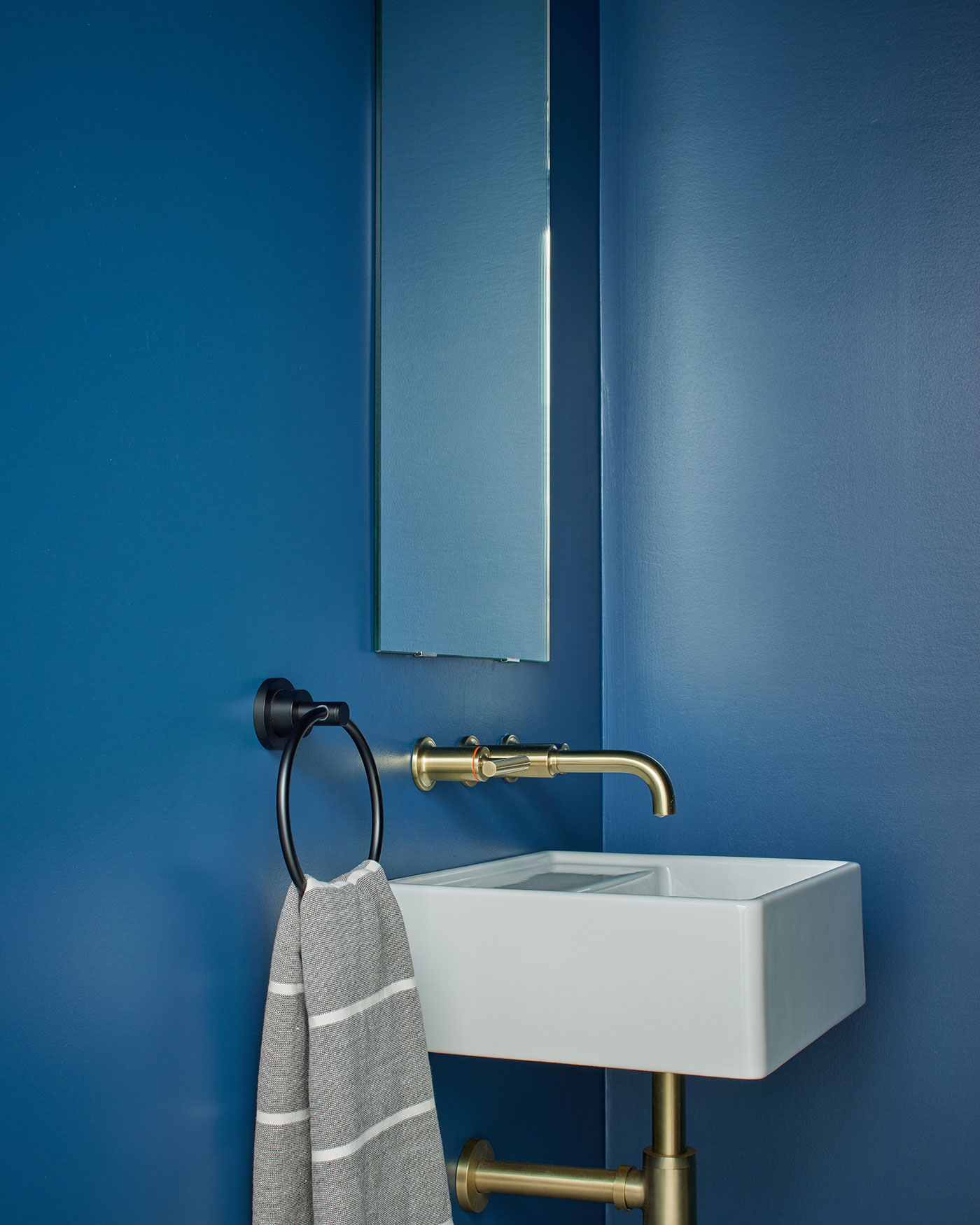 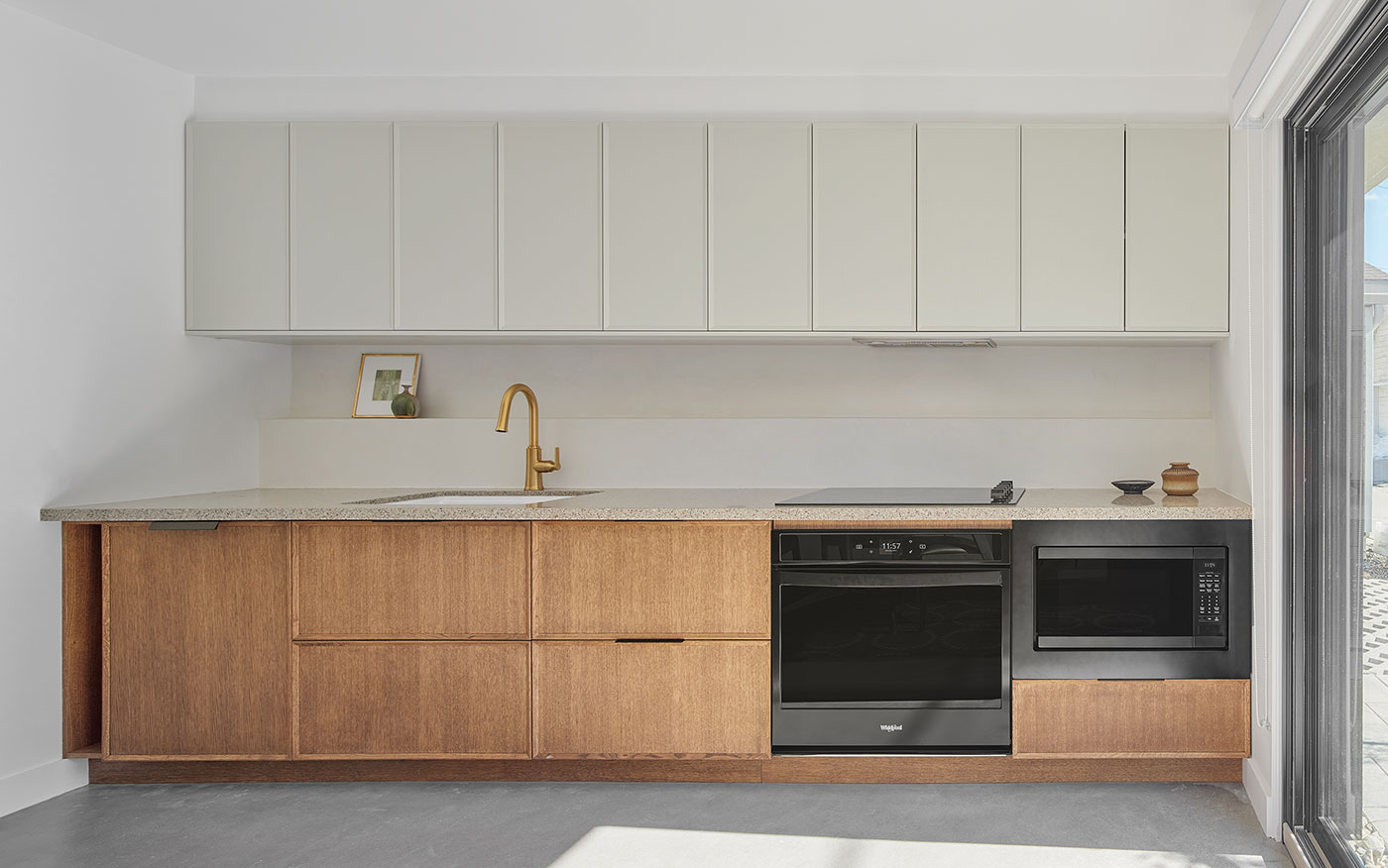 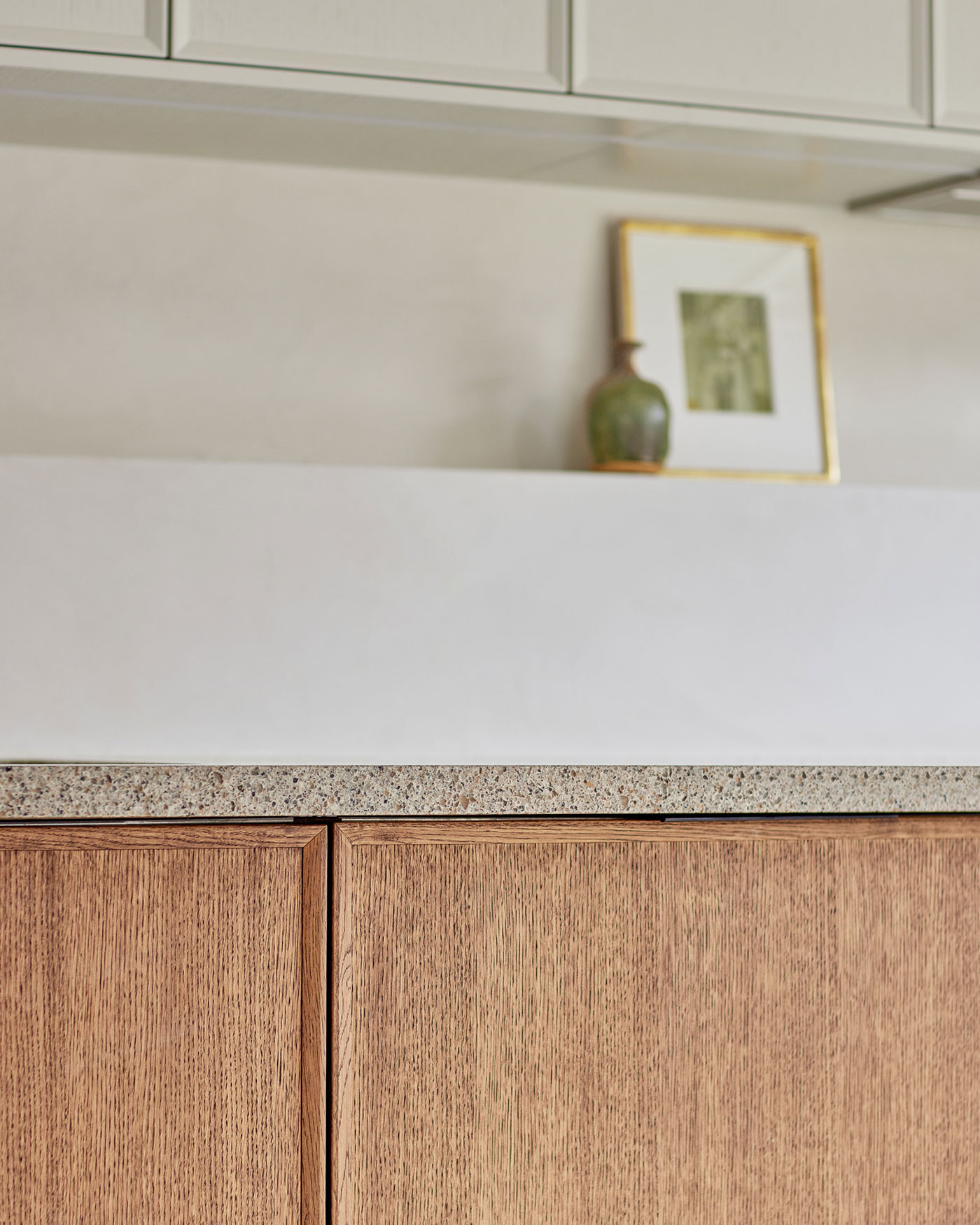 By Christy Wright
Photography by Nanne Springer and Arash Moallemi

From the upper floor of this laneway house in Toronto’s Parkdale neighbourhood, you can see what its architect, Melodie Coneybeare of Solares Architecture, calls a “backdoor perspective” on the city. “This is an urban home, and it faces a city view of rooftops and a laneway,” she says. “It was important for this house to feel like an active part of an urban space.”

Coneybeare’s firm is known for sustainable residential designs that also happen to be beautiful. These qualities spoke to homeowners Mike and Larisa Logan, who saw the potential for a laneway suite where their dilapidated garage once stood. “We wanted the design to be modern and clean,” says Mike. “Our vision was a residence combined with a workshop and studio space for my woodworking.”

The 1,080-square-foot house and 330-square-foot workshop, constructed by Joël Campbell of Laneway Custom Build, took just over a year to complete. “I wanted to maximize the built area while at the same time have it read as more than just a box,” says Coneybeare. “We all wanted to create a building that truly appeared like a home.”

To minimize the impact the space would have on Mike and Larisa’s backyard, Coneybeare split the building vertically into two volumes and shifted the second storey toward the laneway side. “This reduces the impact of the laneway house in the backyard while creating a covered patio area for the laneway tenants on their side,” she says. Mike’s workshop features a traditional overhead garage door on the laneway side and custom carriage doors facing the backyard. “The whole workshop can essentially be opened up and spill from the laneway into the backyard or vice versa,” Coneybeare explains.

Inside the laneway suite, the first floor welcomes you with a partially open-tread staircase (Coneybeare closed the first half of the risers to add storage underneath). Beyond the staircase is the light-flooded, open-plan kitchen and dining area, where a polished concrete floor imparts a loft-like feel. It’s warmly tempered by AB+ZU interior designer Kyla Boyle’s finishes, including the kitchen’s lower cabinets, which feel like a tactile piece of furniture.

Upstairs, two bedrooms, a spa-inspired bathroom and a living room are filled with natural light. By extending a side pathway from the main house all the way to the laneway suite, Solares Architecture created a small side yard that allowed for the installation of a second-level horizontal window in the living room. It is one of her favourite features. “Natural light is such a luxury,” she says, “and this simple window, with its view to the city, is a really great way to visually connect with the urban nature of laneway living.” ​solares.ca 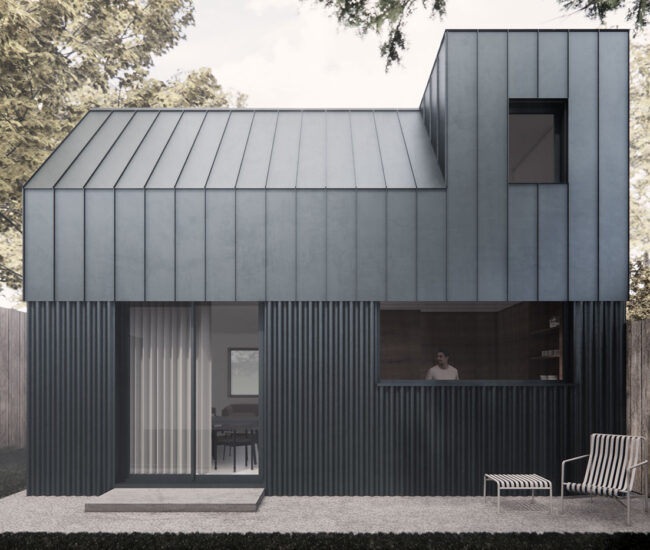 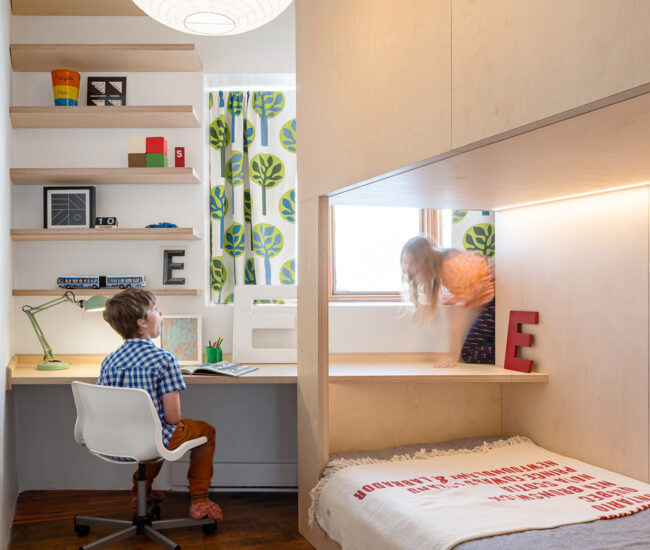 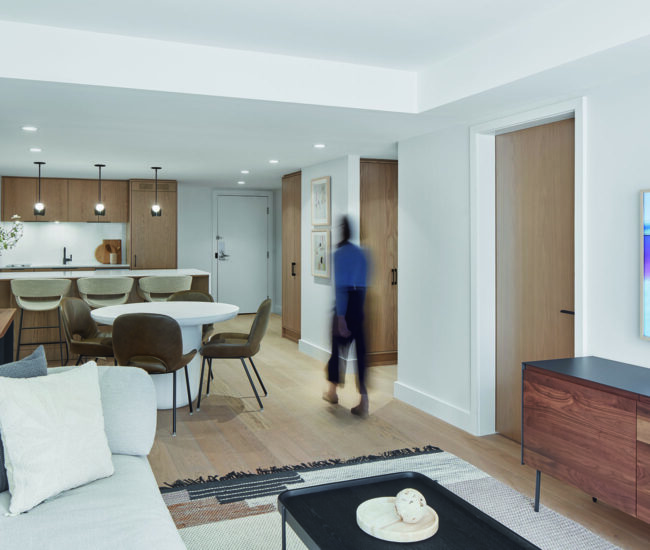