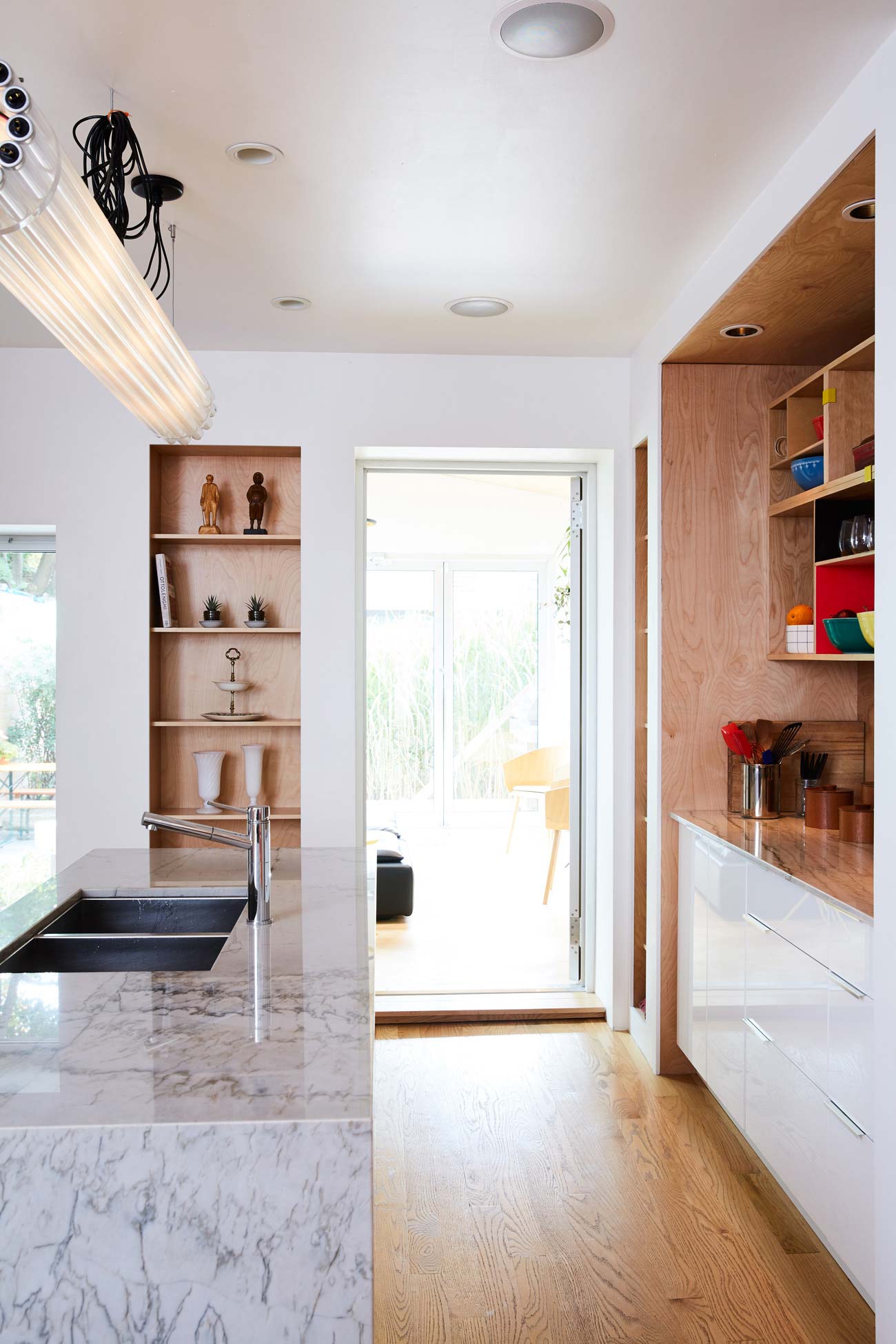 Beyond the kitchen, with its granite island and colour-blocked millwork, Holmes replaced a worn-out deck with a solarium. 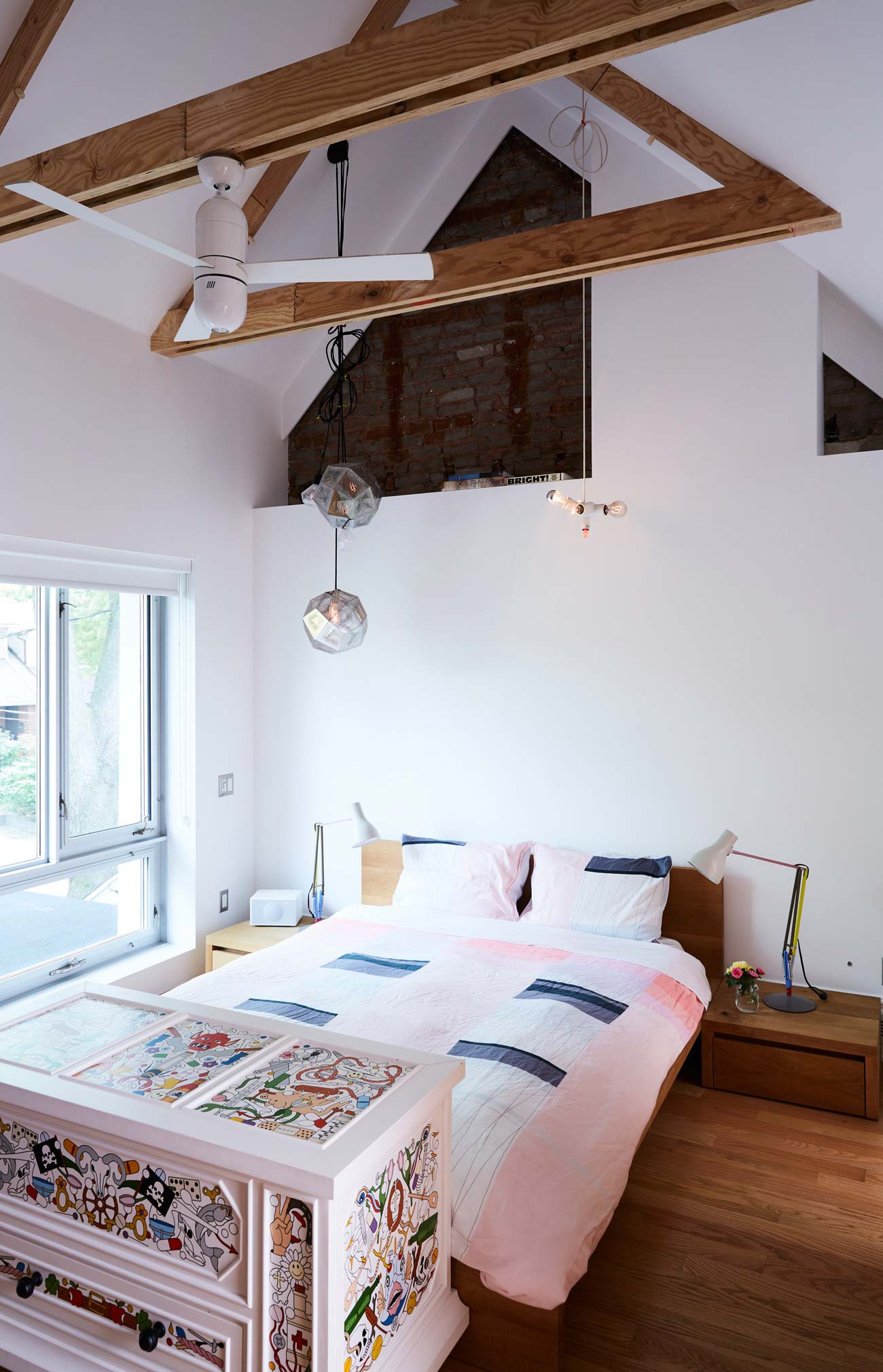 Trusses frame the peak in the master. At the foot of the bed is a Moooi trunk from Klaus. 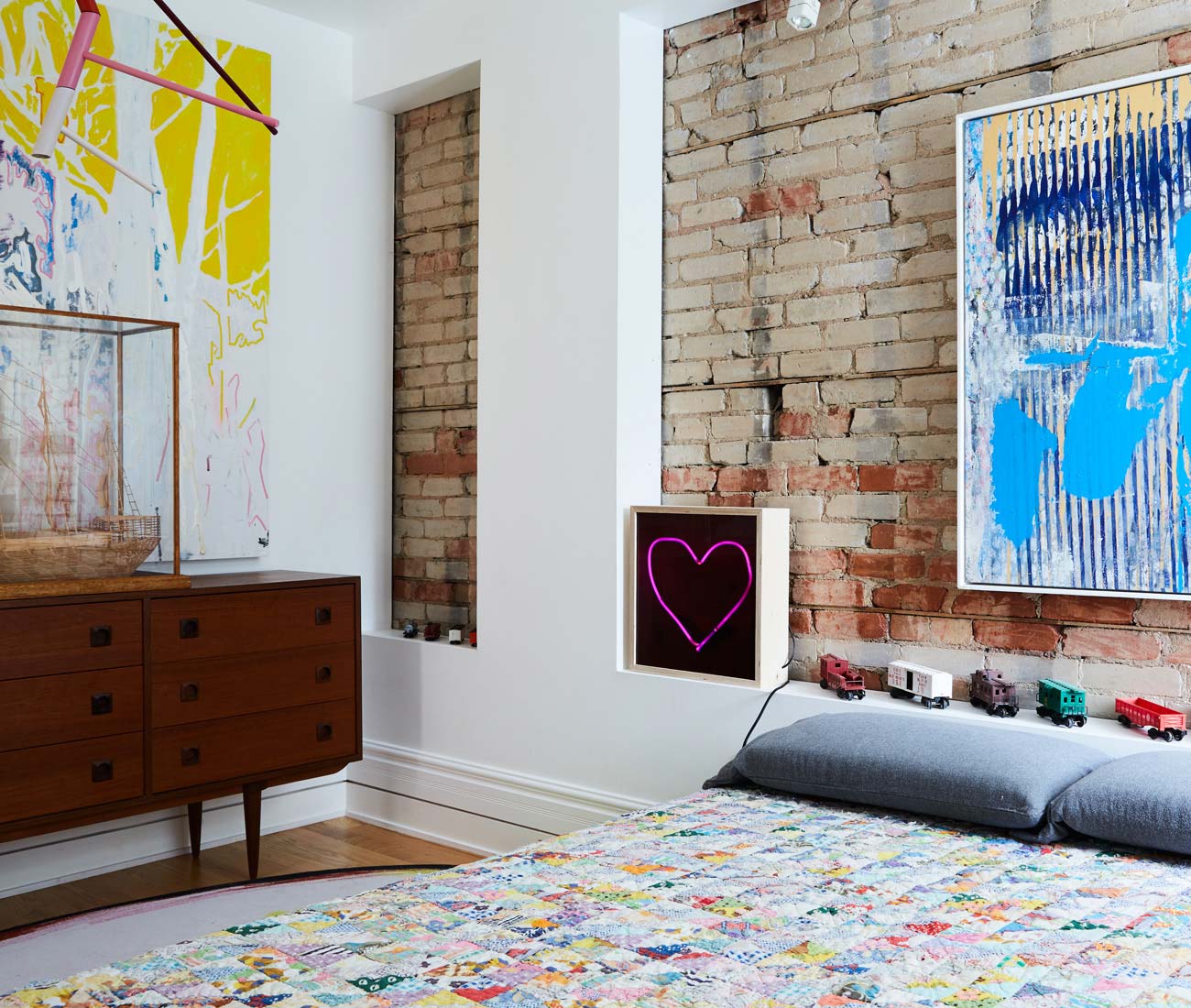 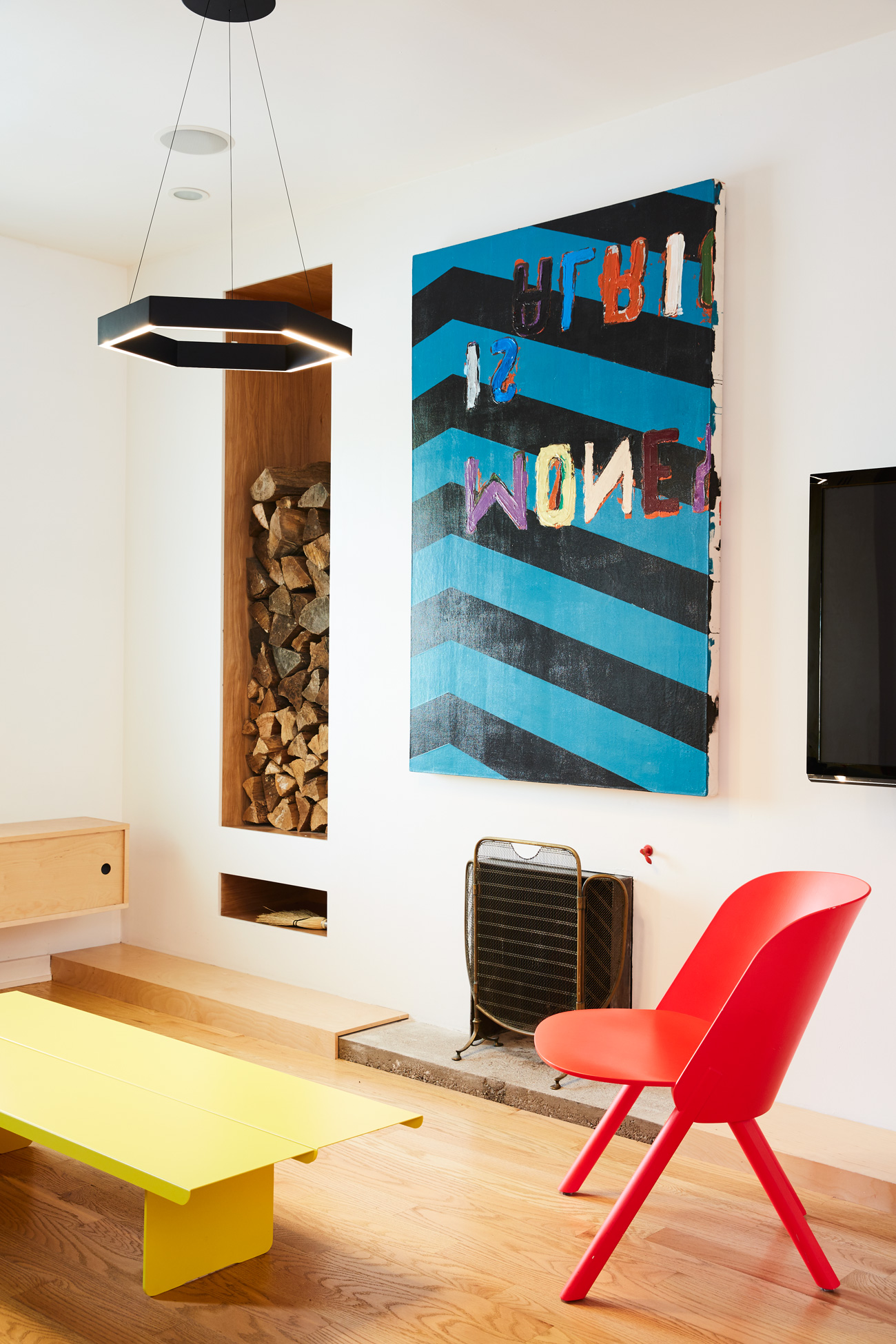 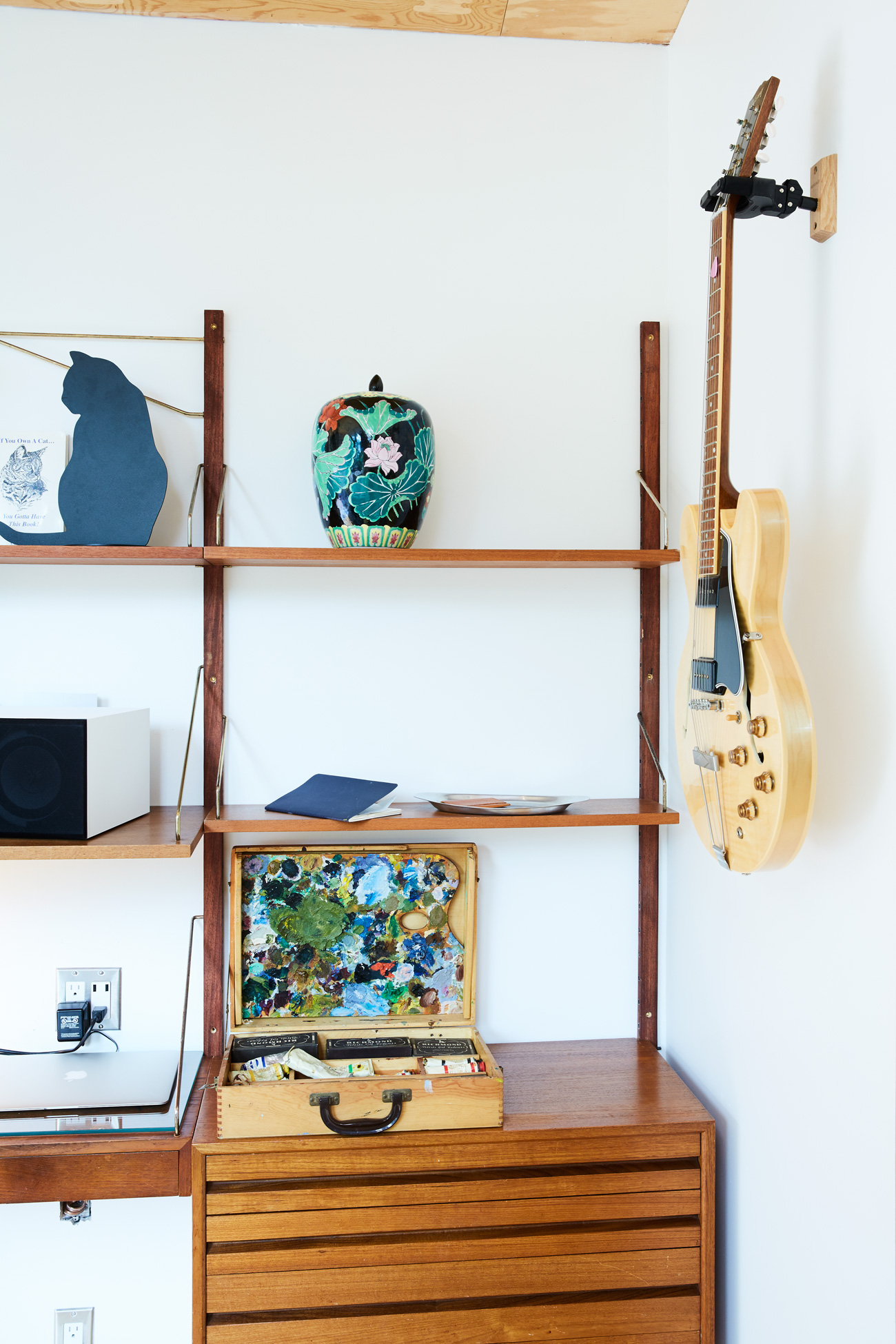 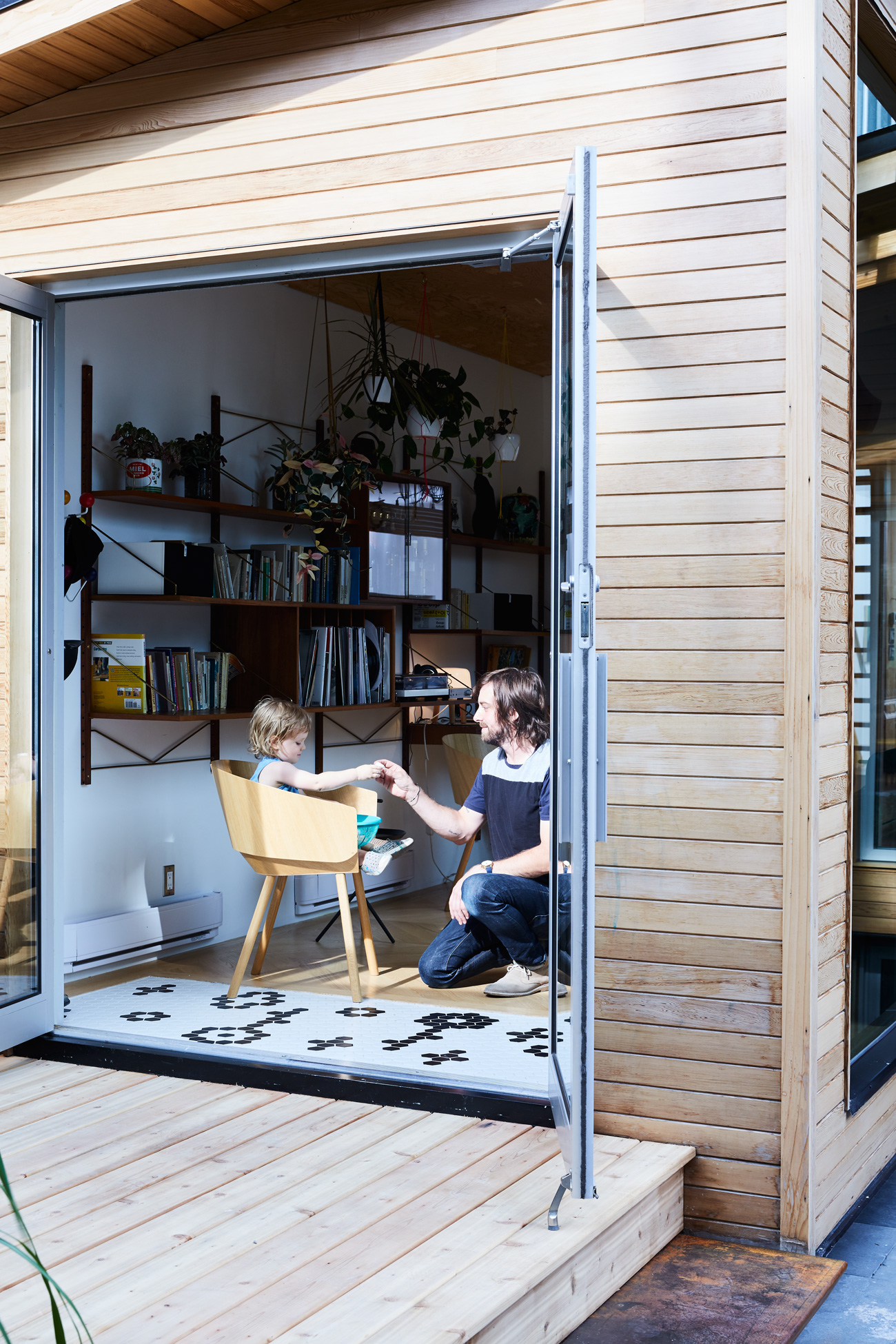 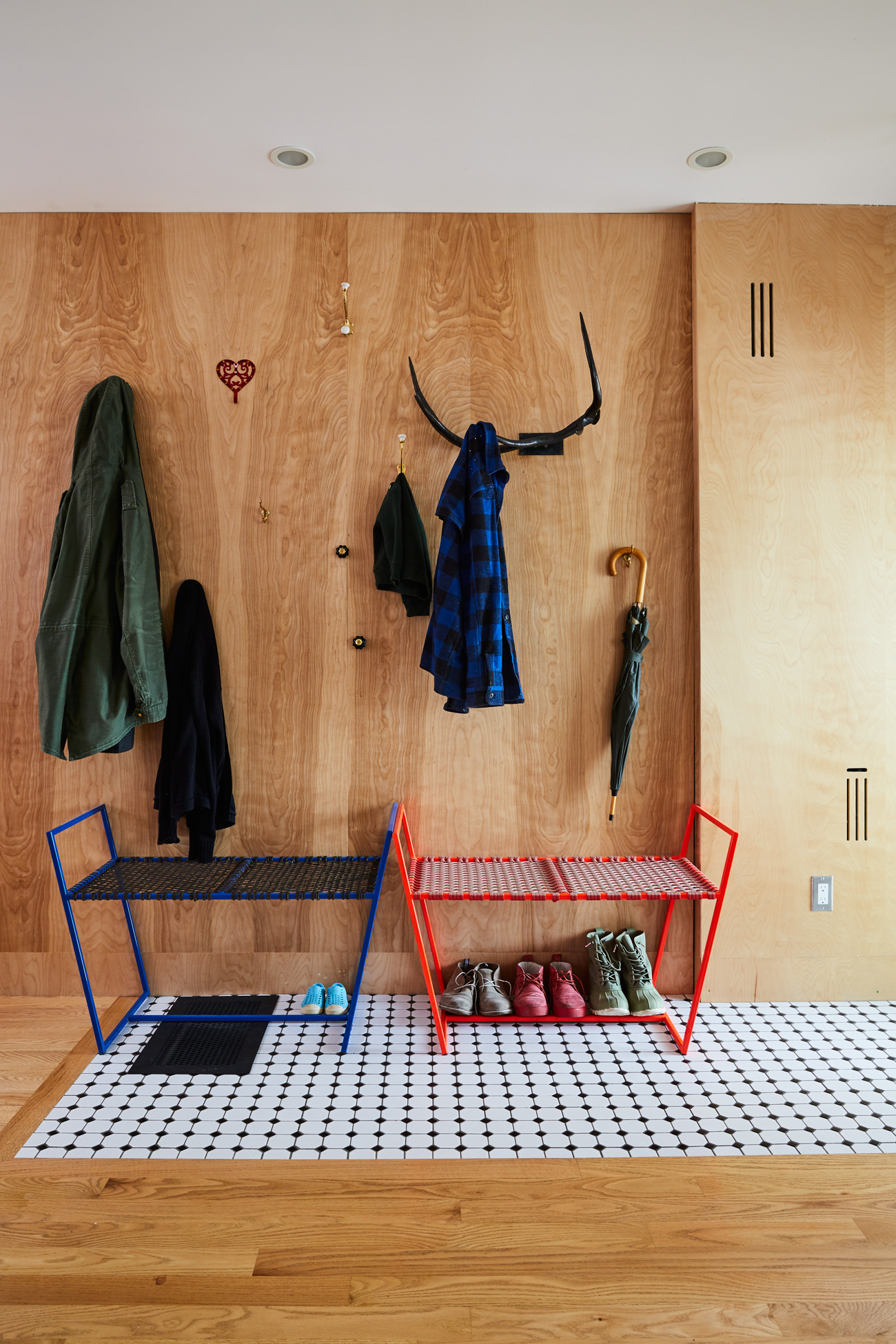 Birch panelling in the foyer has cut-outs for a vent and the door chime. Samare benches from Klaus, cast antlers by Castor Design. 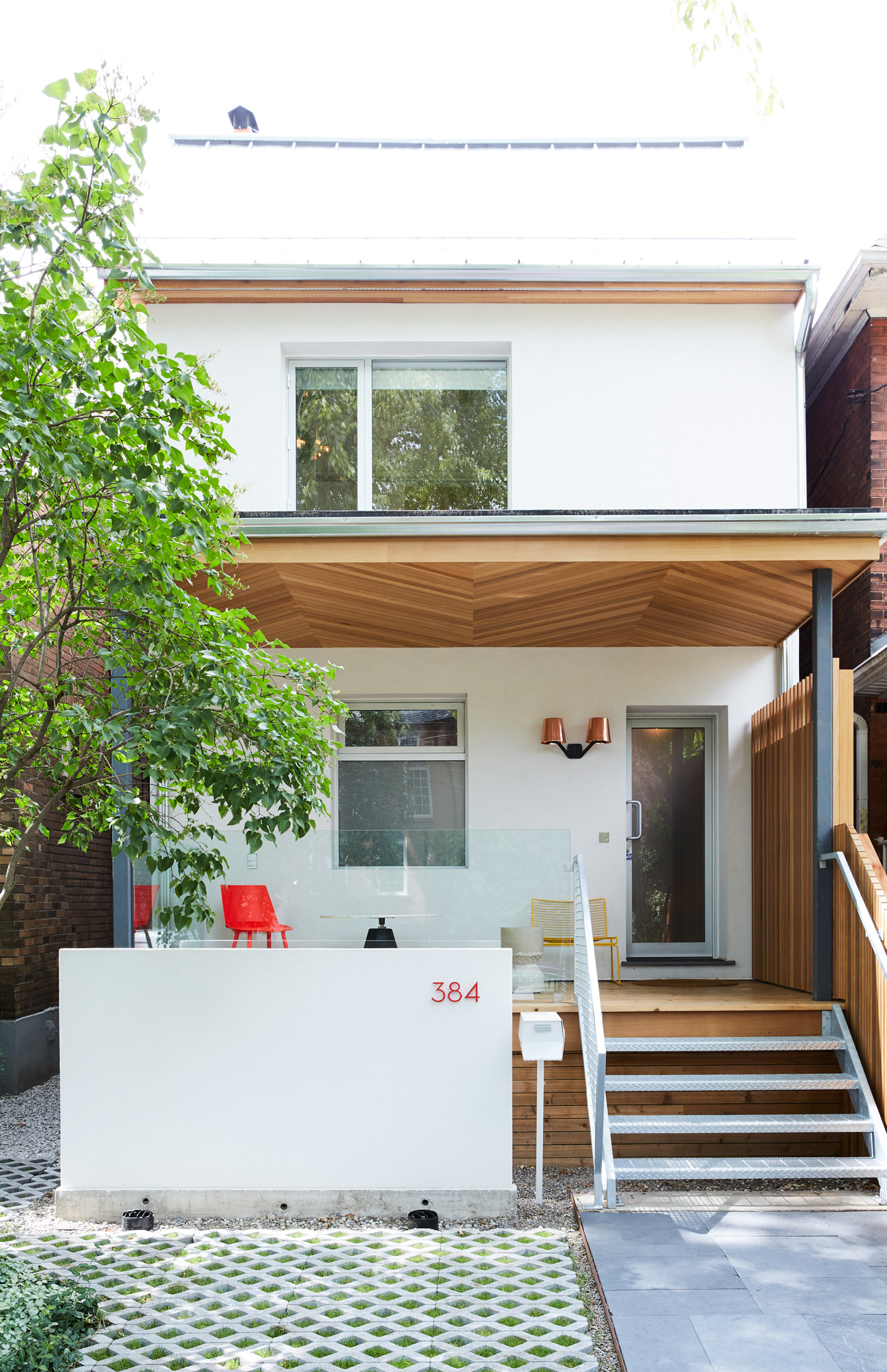 Aesthetic consistency: Cedar cladding with chevron inlay is in tune with the solarium, and a patch of turf blocks nods to intricate interior tiling.
Share Tweet Pin Email Print

A mixed-media artist completes his greatest canvas yet: his home

For Thrush Holmes, it was a snap decision in 2008 to purchase his High Park-area detached, a house he would go on to re-imagine and renovate for the next near-decade. “We just bought it without really exploring the depths of it, or the construction,” says the self-taught painter and mixed-media artist. “We overlooked a lot. A lot.”

Holmes, who’d trained as a master carpenter, had expected to renovate the place himself – but he wasn’t prepared for just how many issues the previous owners had left behind. In the first month, the roof started to leak. In the first year, the air conditioner and furnace broke. Even the dishwasher caught fire.

“Everything that could have gone wrong, went wrong,” he says. The house forced Holmes to take on a room-by-room renovation, a project that, over the years, has evolved in aesthetic and approach as has his own art, which is sought after both here and abroad for its bright elemental colours, gestural lines and occasional stabs of neon light.

Holmes started with the master bedroom by peeling off drywall to expose the brick behind, and re-vaulting the ceiling with collared ties – an arduous process he re-did three times. The adjacent office was recast as a walk-in closet, hidden away from the main room with a custom-built sliding door. Rather than knock down walls, he re-dressed them in clean, white moulded frames that evoke some of the domestic surfaces he’s seen and loved during show trips to Paris. “There was no character left in the house. It had all been ripped out or covered up,” he says. “So I put some older things back in. Slowly.”

The one wall he did remove was on the main floor, which separated the living room and kitchen from the entrance. Now, the long, uninterrupted stretch features mid-century and contemporary furniture that signals a change in each living space: In the living area, sculptural E15 lounge chairs and built-in firewood storage, and in the dining area, a mismatched-footed dining table by Castor Design. At the back of the house is a mix of IKEA and hand-built, birch cabinetry coated in electric reds and oranges surrounding a massive granite island with a marble look.

Holmes’s most fastidious work is found in the solarium (formerly a deck), with carefully inlaid chevron flooring and a custom black-and-white tile design. And out back, he’s in the process of converting a shed into a sauna. With the bulk of the renovation behind him, could this be a final step? Holmes isn’t so sure and, just in case, he’s rented a garage down the street in which to keep his tools. “I couldn’t have conceived of the whole house from where it was to where it is now. The way someone comes in and just designs the whole thing in one go…it would lack a kind of spirituality for me, or have the guts that it has now.”