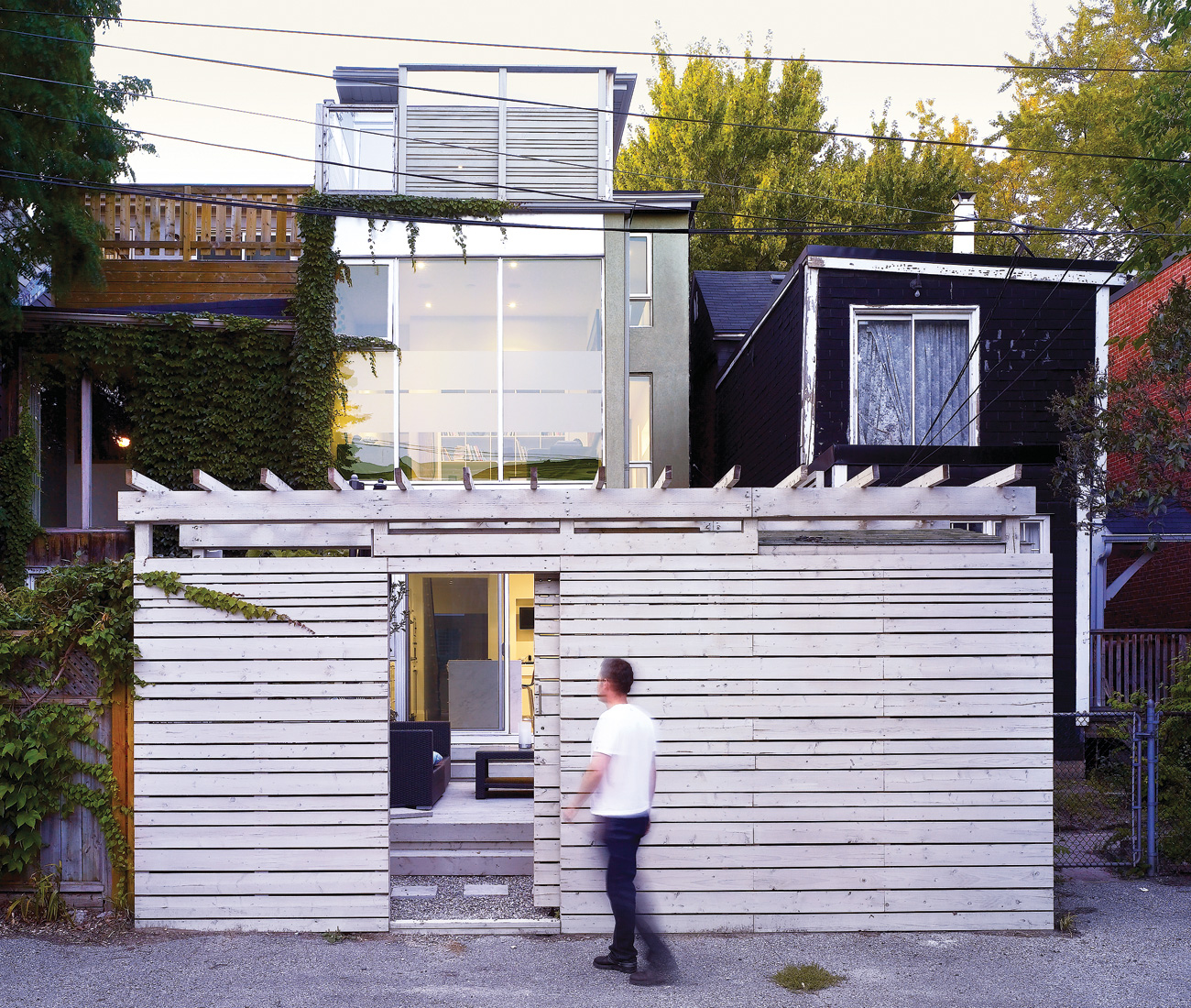 Like most row houses in Cabbagetown, the backyard faces onto a laneway. Dubbeldam frosted portions of the low-e glazed cladding to maximize light and heat without giving up privacy.
Share Tweet Pin Email Print

Architect Heather Dubbeldam revamps the interior of a quirky three-storey

The classic Toronto Victorian house: small front yard, red brick facade, and inside, whatever bits and pieces previous-owners-slash-weekend-renovators have left behind. That was the familiar story of one three-level row house in the east end when Nick Foglia and his partner moved in eight years ago. Like most houses in the Cabbagetown area – a neighbourhood that has been in constant gentrification mode since the 1970s – theirs was a fixer-upper with history worth preserving, but lots to demolish as well. “Various people had lived here,” says Foglia. “You could tell one portion was renovated by someone and then they stopped; then someone else took on another home improvement project.” After three years of living with the house’s quirks, the couple had a clear plan for their Victorian house renovation: hire an architect.

Enter Heather Dubbeldam, a former KPMB architect and founder of her own busy downtown firm that has been winning praise and awards for renovations much like this one. “They summed up their aims in a nice little phrase,” Dubbeldam says about her clients’ goals: “Lines of sight and flow of light.” To get that sense of openness without losing the house’s original charms, she decided to open the interior space but maintain spatial hints of the original floor plan. On the main floor, for instance, the dining room and kitchen are now one, but the original crown mouldings between living and dining rooms are still intact. There’s also a new vestibule defined by a wood-and-glass wall, which brings light in while keeping the weather out.

The main floor leads to an all-white kitchen with glass doors opening up to a small backyard. While the cupboards look custom-built, they’re actually from a big-box store, with the addition of a Blanco steel sink and sleek countertops made of volakas marble.

The house, Dubbeldam says, gets newer the higher you go. A staircase with jatoba treads and open risers doubles as a kind of thermal chimney – allowing for greater air circulation throughout the house and up to a skylight. It also visually unites the first floor and second, where a library, entertainment room, bedroom and washroom are located. The entertainment room is the showstopper: a tall, complex space, it replaces a bedroom and hallway with a spacious lounge area, entertainment unit and built-in cabinets.

Bringing it all together is an understated material palette that carries through to each level: jatoba, limestone, marble and glass tile. On the third floor, jatoba wood climbs up one wall of the master suite to form a headboard, and slabs of limestone form a U-shaped niche that surrounds a gel fireplace.

All this sleekness remains hidden from the street while the windows offer contrasting views of the back laneway and the ragged edges of neighbouring Victorians. “These houses just weren’t built for the way people live now,” Dubbeldam says. “But I think we’ve kept the traditional and modern elements in balance.”

For more stories about Victorian House renovation check out this links: